Greg Noll in front of Dale Velzy’s surf shop in 1958 (left), and (right) Dale Velzy. The photos were taken by Hermosa Beach pharmacist Don Guild when he and his wife Barbara went to the shop to pick up two balsa and fiberglass surfboards Velzy had made for the couple. The Guilds took the boards with them to Oahu, aboard the Matson Liner “Lurline.” Photos courtesy of the Guilds

Dale Velzy is responsible for the South Bay becoming a center of the surfing world. In the late ‘40s, he reshaped plywood he found on the beach into surfboards that were much lighter than the traditional redwood boards.

His future partner Hap Jacobs told me, “Everyone at Redondo High envied Dale. He lived on the beach, and ditched class everytime the surf was good. The truant officers would find him at the Manhattan Pier and drag him back to school.”

Velzy made enough money selling his surfboards to rent a one room storefront a block up from the Manhattan Beach Pier. Everyone hung out there. Velzy couldn’t remember names so he called  Hap Jacobs Gremmie 1, Bing Copeland Gremmie 2, Rick Stoner Gremmie 3, and Greg Noll Gremmis 4. Along with Velzy, all are now charter members on The Hermosa Beach Surfing Walk of Fame. 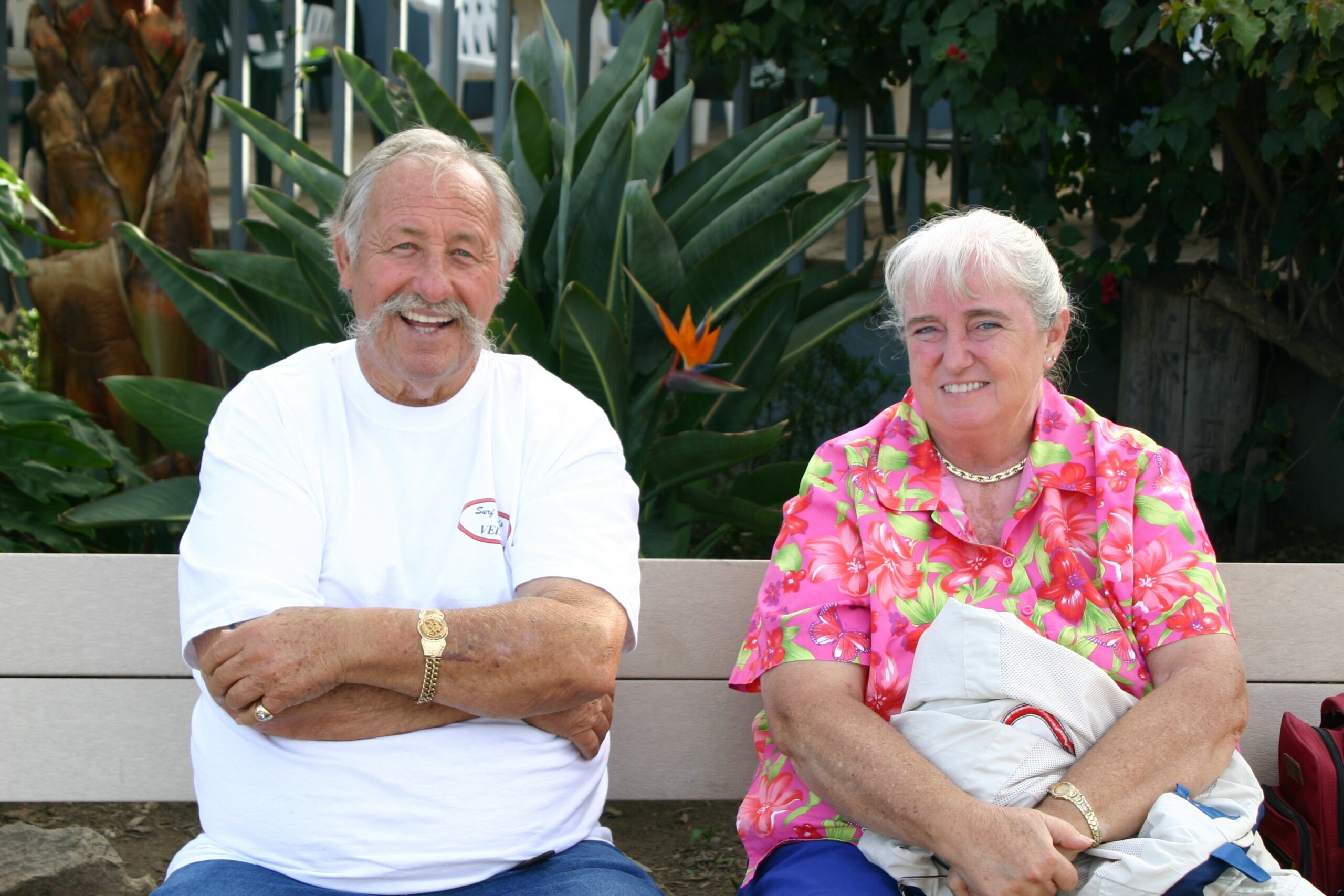 Dale Velzy and companion Fran Hoff at a reunion of early South Bay surfers held at the Hermosa Beach home of Bob and Katrina Bergstrom in 2004. Velzy died the following year. Photo by Katrina Bergstrom

Velzy was a natural promoter, and was the first to put his name on the boards he built. As his business grew, he opened a shop in Venice, strategically located halfway between the South Bay and Malibu.

He loved surfing, and hanging out with all the Malibu movie stars. John Wayne, Cary Grant and Peter Lawford were his buddies. He was making a lot of surfboards, and a lot of money. After he bought a Gull Wing Mercedes he got pulled over every time he came into the South Bay. The police thought he was a drug dealer.

In Hawaii he made friends with a hot 12-year-old surfer named Donald Takayama, who showed him a surfboard he built himself. Velzy told Takayama if he came to California he would give him a job. The 12-year-old saved up $50 from his newspaper route, and was at Velzy’s shop a few months later.

Velzy Surfboards became the biggest name in surfing. At the same time a scuba diver named Bev Morgan owned a dive store in Redondo Beach where Hap Jacobs made his surfboards. 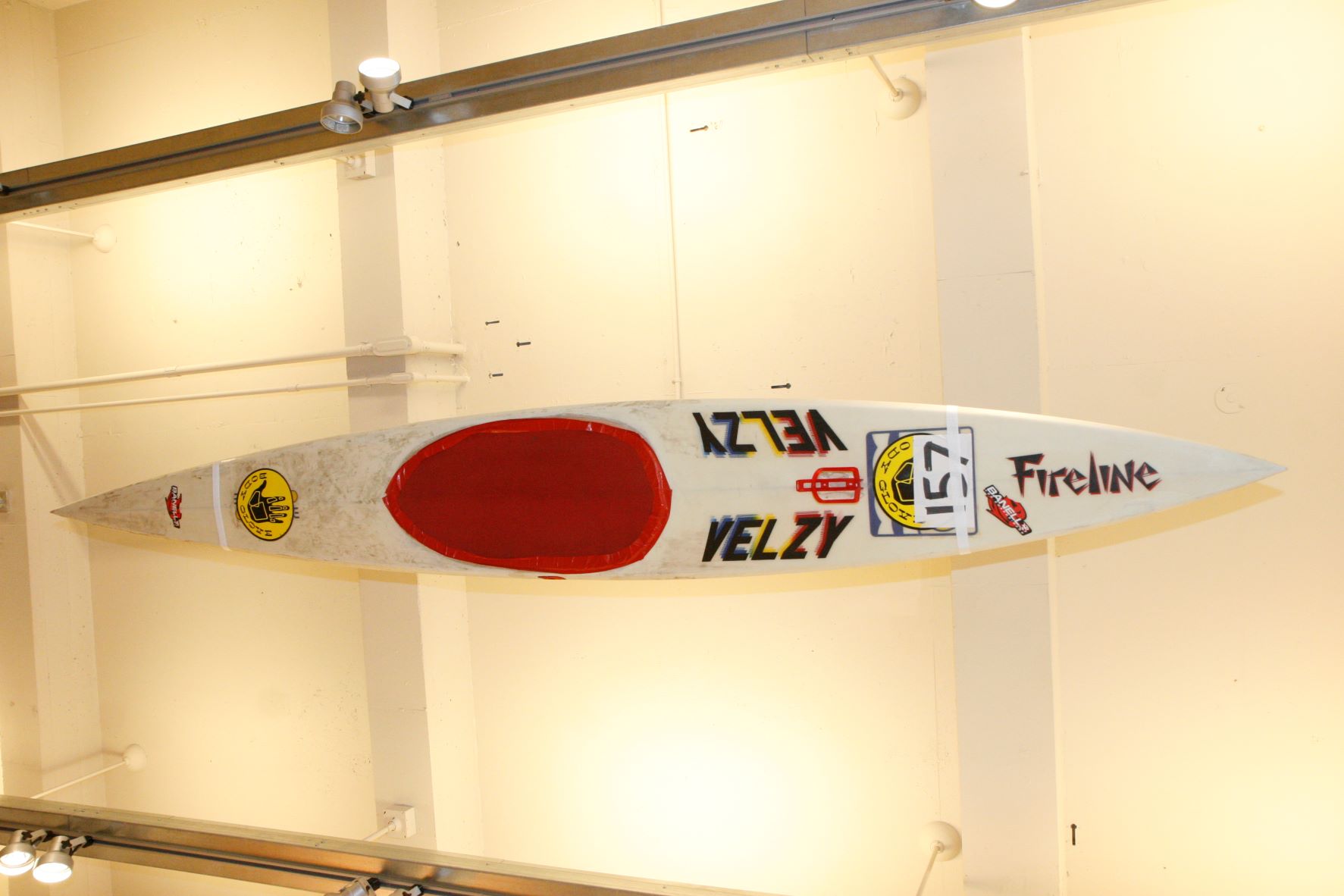 Terry Stevens won the 1982 Catalina Classic Paddleboard race stock division on this board shaped by Dale Velzy, now on display at the Hermosa Beach Historical Museum.

Bev asked Hap to come up with a name for the store. Hap said, “You do all the diving and I do all the surfing. Let’s call it Dive N’ Surf’.” Bev was inventing the wetsuit at the time. The Meistrell twins, Bob, and Bill, wanted to buy into Dive N’ Surf, and move Jacobs out. Bob Meistrel went to the Velzy shop, and convinced Velzy to make Hap Jacobs his partner. Bob said, “You like hanging out with movie stars at Malibu. Hap Jacobs loves making surfboards and has a lot of good South Bay surfers riding them.” Velzy became Surfboards by Velzy/Jacobs.

The best surfers in the world rode for Velzy/Jacobs. In 1958, Bruce Brown was making his first surf movie, “Slippery When Wet,” and needed money. He wanted to take the Velzy/Jacobs Surf team to Hawaii and film them. Dale gave Bruce Brown the money and gave plane tickets to Donald Takayama, Henry Ford, Tim Kelly, Dewey Weber and Mike Doyle. Brown got his best footage of a hollow peak off a reef a block north of Sunset Beach. The reef did not have a name. Brown said, “Dale Velzy is paying for this movie so why don’t we call it Velzyland.” The name stuck and remains a famous surf spot.

In the mid ‘60s Jacobs got tired of doing most of the work. Velzy just wanted to party. So they  split up.  Hap moved to 422 Pacific Coast Highway in Hermosa Beach. Dale stayed in Venice, where he was teaching Dewey Weber how to make surfboards.

Dale wanted to open a shop by the Hermosa Beach Pier and have  Weber run it. But the IRS busted Velzy for back taxes. He wound up selling his name to a hardware store chain and Dewey opened a shop where Velzy had hoped to.

In the early ‘70s, before the resurgence of the longboard, I saw Velzy at the Wave Tools Surfboard Factory late one night. I was checking on a surfboard order from Japan. Velzy was working on these beautiful 4-foot tall, balsa surfboard clocks. I asked him how his surfboard business was going, and he did not want to talk about it. I said, “Don’t you miss it? You were the king of the surfboard. He said he was happy making surfboard clocks. He said that he got upwards of $600 per clock. A new surfboard cost $150 at that time.

I thought Dale Velzy would make a big comeback with the resurgence of the longboard and longboard surf contests, but he opted to make paddleboards. He took Joe Bark under his wing, and now Bark Paddleboards are the most popular  paddleboards in the world.

Thousand showed up at Velzy’s funeral at Doheny State Beach to pay tribute to one of the fathers of modern surfing. Sand from Velzyland, wrapped in 500 tea leaves, was scattered in the surf. Velzy’s cousin, Bill Medley of the Righteous Brothers sang “Desperado.” ER