Lifeguard ‘tower of love’ to be a Hermosa Beach welcoming sign 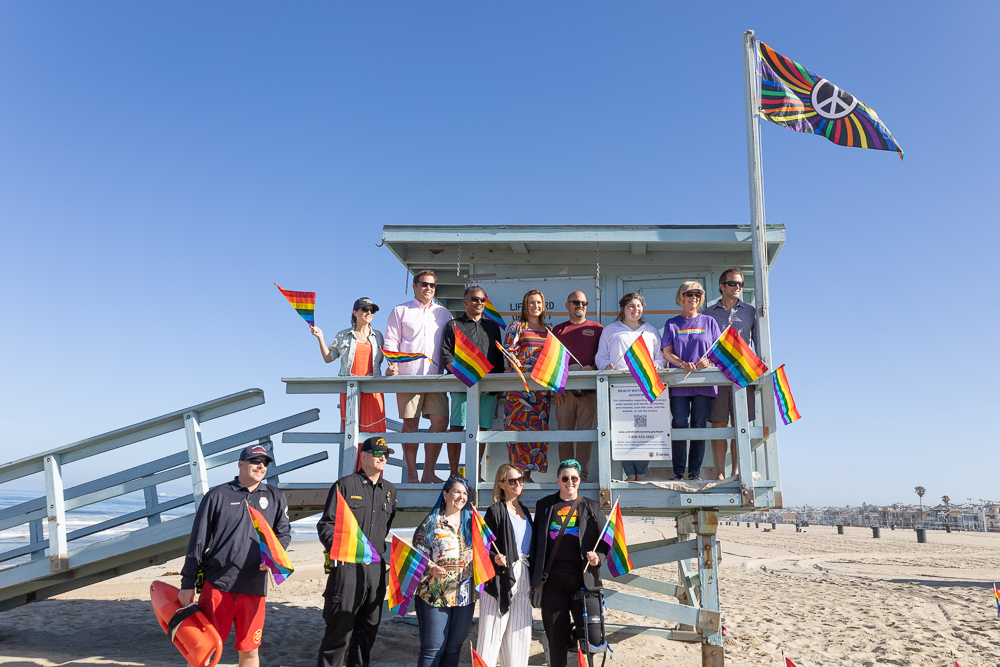 Work began Monday morning on a tower of love in Hermosa Beach, in the form of a rainbow-colored lifeguard tower, north of the pier.

“We’ve experienced some dark days during the COVID pandemic, from George Floyd’s murder to increases in violence against Asians,” Hermosa Beach Mayor Justin Massey said during a press conference, preceding painting of the 13th Street tower.

“Then on March 21, a Long Beach lifeguard tower painted in the LGBTQ Pride flag colors, was burned. That’s what prompted Izzy Bacallao to approach the city council about painting a Hermosa lifeguard tower in the Pride flag colors,” Massey said. The council unanimously supported Bacallao’s proposal, and also voted to further support LGBTQ Pride month by flying the Pride flag at city hall and lighting Pier Plaza at night in rainbow colors.

Because the lifeguard towers are county-owned, the city needed the Los Angeles County Board of Supervisors’ permission to paint the tower. On a motion by local Supervisor Janice Hahn, the Board gave its unanimous approval.

“People love the lifeguard towers. People know when they see one someone will come to their rescue,” Hahn said at the press conference.

“The lifeguards, too, have come a long way,” Hahn added. “In the old days, they didn’t want us to touch their towers.”

Hermosa Beach’s history of painting lifeguard towers to reflect social trends began in the mid-1980s, when a group of Neptune Street surfers began repainting the Neptune Street tower every July 4th. Derek Levy, one of the surfers, said they painted the tower pink the first year because Miami Vice was popular, and he and his friends all wore pink Lacoste shirts. Another year, Power Rangers were painted on the Neptune tower to protect the lifeguards, whose jobs were threatened by budget cuts. When the Kings won the Stanley Cup in 2012, the team’s black and white logo was painted on the tower. In 2018, the county renamed the Neptune tower 1st Street to make it easier for county dispatchers to locate. Overnight, Neptune was restenceled on the tower, but the old name was quickly removed.

County-sanctioned painting of the lifeguard towers began in 2010, with the “Summer of Color” art project, involving all 157 lifeguard towers along the county’s 31 miles of beach. The towers were hung with 2,200, colorful panels, painted by kids in the Portraits of Hope art therapy program.

Bacallao, an 18-year-old Hermosa resident who identifies as nonbinary, said the burning of the Long Beach lifeguard tower inspired the idea of responding to the hate crime with love.

‘I want people to take pride in their individuality and uniqueness,” Bacallao said at the press conference.

Painting the 13th Street lifeguard tower in rainbow colors is expected to take two weeks. An unveiling of the repainted tower is tentatively scheduled for Saturday June 26. The tower will be repainted the traditional sky blue at the end of summer. ER