Local prayers and aid for Haitians 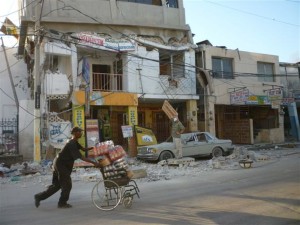 A man pushes a shopping cart down a rubble-strewn street.

Hermosa churches, service clubs and schools rallied to the aid of earthquake-ravaged Haiti, helping to send food and water, medical aid, tents and more to the impoverished nation that suffered a disaster Jan. 12 that galvanized much of the world.

At Hope Chapel and St. Cross by-the-sea Episcopal Church, members prayed for the denomination’s clergy and flock in Haiti, and the rest of the country’s people as well, while word of their welfare trickled to Hermosa.

Hope Chapel’s denomination, Foursquare, maintains seven churches in Haiti. All of their pastors and their families have been accounted for. The denomination also maintains an orphanage, which remains intact.

However, 12 Haitian members of the church are confirmed dead and at least 20 members’ homes were destroyed. One church member’s wife had to have both of her legs amputated; her two children were among the dead.

Foursquare members worked alongside first responders in Haiti, and were planning recovery and ministry strategies for the coming 18 to 24 months.

In addition, Hope Chapel and other Foursquare churches asked members to pray for security and for spiritual and psychological protection for people in Haiti, and for the disaster responders.

Hope Chapel is working with the denomination to raise a target $250,000 for initial aide to Haiti including food, water, and shelter for the displaced, trucks, motorcycles, and other vehicles, building supplies and equipment, and medical care and supplies.

Donations can be made at give.foursquare.org.

St. Cross members also were asked to pray for the people of Haiti. An Episcopal cathedral and diocesan officers were destroyed by the quake. Denominational relief and development workers were supplying food, water and other supplies to about 3,000 people in a tent city at Port-au-Prince.

More than five tons of food have been delivered to survivors in diocesan camps. Helicopters were used to deliver food to six camps – inhabited by more than 15,000 survivors – which are not accessible by vehicles.

Permanent latrines and clean water sites, designed to resist further quakes, were being built in eight camps. The church said the projects were providing sanitation and clean water, and creating local jobs.

St. Cross has been contributing to Haiti in cooperation with the Episcopal Relief and Development (er-d.org/HaitiCrisis). The church received about $4,500 in contributions the first week alone.

The Hermosa Beach Kiwanis Club board held an emergency meeting and determined to channel all funds raised through “Hope for Haiti,” a nonprofit organization based in Naples, Fla., which has worked for years to improve the quality of life for the Haitian people.

Hope for Haiti has delivered seven doctors and nurses and 75,000 pounds of food, water and construction materials to two hospital sites in Port au Prince.

“Basic human services are virtually nonexistent, not only in Port-au-Prince, but in most of the country, said Hope for Haiti country director Mike Stewart, who has set up a Trauma Unit at the Villa Creole Hotel in Petion-Ville. “Delivery of water, food, medicine and qualified personnel to the people who need them most is essential.”

Kiwanis made an initial $1,000 donation, and donations by club members include $500 from Jeff Maxwell of Palos Verdes Limo, $500 from Richard Beynon of Hermosa Saloon, $250 from Inland Pacific Management owners Mike Miller and Bob McEachon, and $250 by Dick and Cathy McCurdy, who sits on the city school board.

“We hope our initial efforts both inspire and raise the awareness of other Hermosa service clubs, businesses, and individuals to make an immediate donation to Kiwanis or to Hope for Haiti to help the Haitian relief effort,” said Mickey McRae, President of Hermosa Kiwanis Club.

Donations in the form of checks can be sent to H.B. Kiwanis, PO Box 121, Hermosa Beach, CA 90254 and made out to The Hermosa Beach Kiwanis Foundation, or online, to Hope for Haiti, by check or credit card at hopeforhaiti.com.

Hermosa Rotary has been collecting funds to buy at least one “shelter box” for Haiti. The boxes are supplied by Rotary International and each includes a 10-person tent with two interior partitions and a repair kit, vinyl insulated sleeping mats and lightweight thermal blankets, 180 water purification tablets or a water purification kit, and one five-gallon “flat-pack” water container.

Students at the third- through eighth-grade Hermosa Valley School were collecting pairs of shoes to ship to Haiti, and the Student Council was considering selling “Hermosa Loves Haiti” fundraising stickers. ER