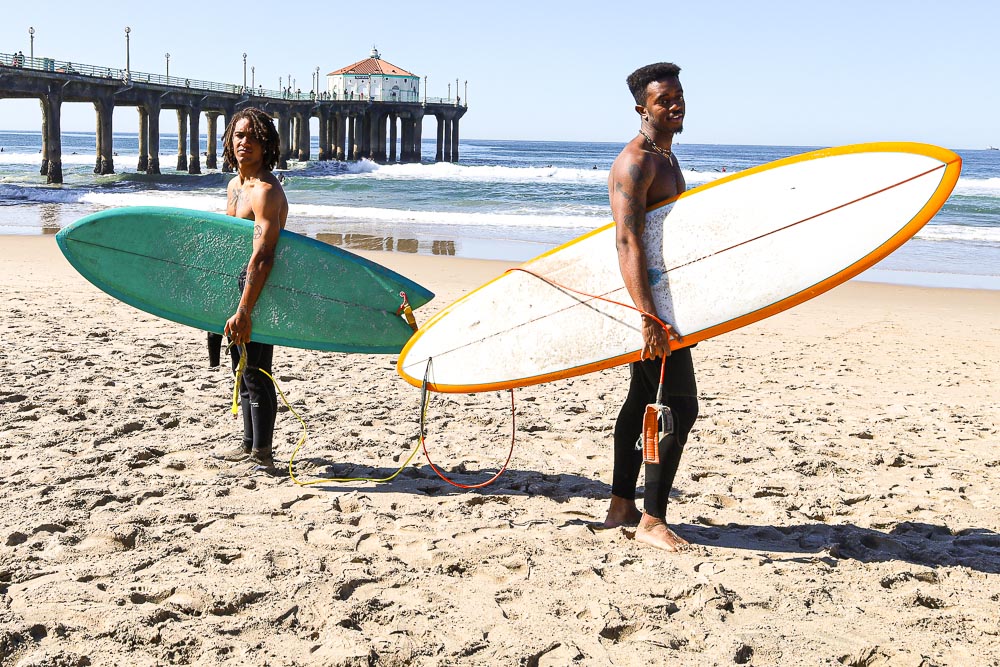 On President’s Day morning, a middle-aged, white surfer hassled two 24-year-old Black surfers in the line-up at the Manhattan Beach Pier. He told them to go surf in El Porto. Then, more pointedly, he told them to go surf Bruce’s Beach, a Blacks only beach in the 1920s and more recently, the site of Black Lives Matter protests.

He used the epithets nigger and donkey, though kook would have been more cutting because the two Black surfers are new to surfing. He paddled up close enough to one of the Black surfers to splash him in the face.

The incident might have been dismissed as just another “stain on the soul of surfing,” as localism is described in a 2000 essay by Surfrider Foundation co-founder Glenn Hening. Except that morning, Rashidi Kafelle visited his chiropractor, Robert Bates, whose Highland Avenue office is two blocks up from the pier, where, afterwards, Kafelle decided to stretch his legs. 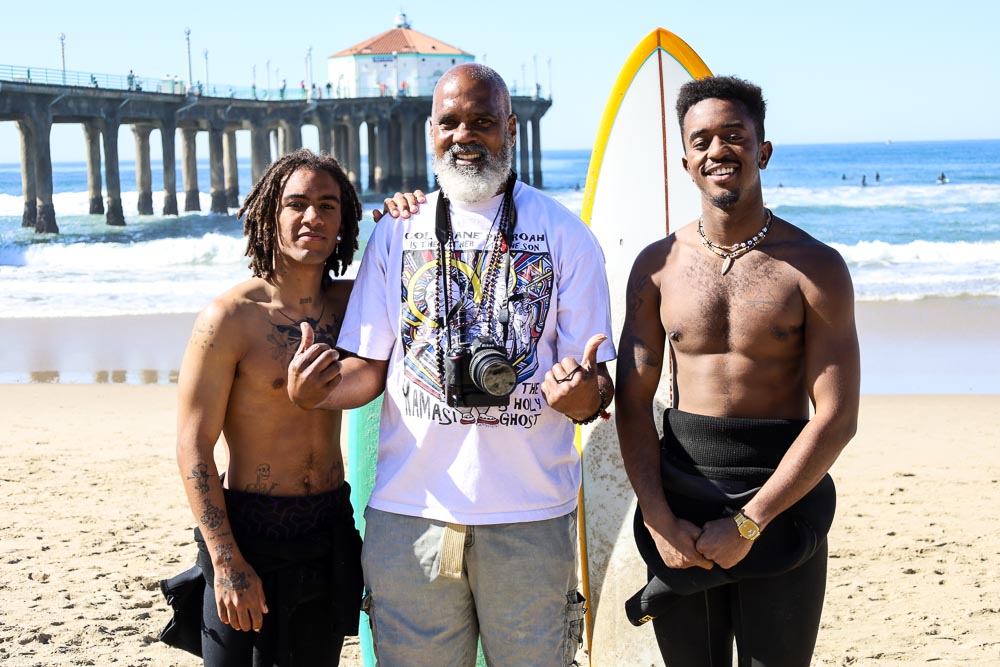 In recalling the morning, Kafelle said, “I saw two Black dudes surfing, which is unusual, so I started taking photos with my cell phone. Then I heard the word nigger.” Kafelle is Black.

His photos didn’t have audio, but the tension in the water is evident from the splashing.

After the two Black surfers paddled in, Kafelle caught up with them in the parking lot and offered to send them the photos.

The Black surfers were Justin Howze and Gage Crismond. They are founders of BlackSandSurf, an arts collective focused on design and social media. Howze is also a DJ who goes by the name Brick. He has 75,000 Instagram followers. 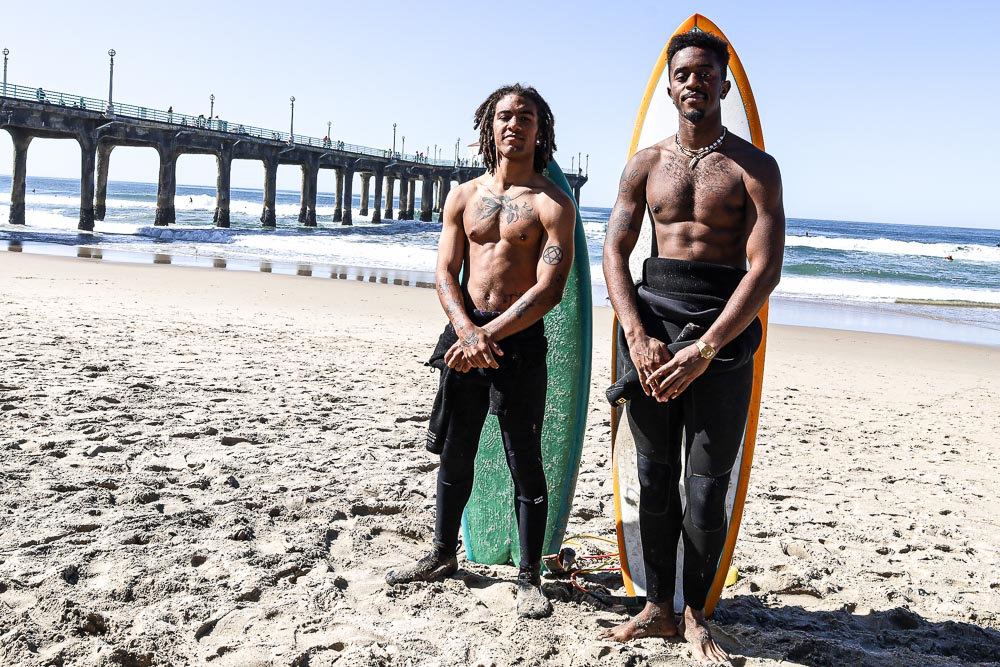 That evening, Brick and Crismond posted Kafelle’s photos on Instagram, along with a 38 minute selfie video, during which they describe the incident. The video had 68,871 views by the following day.

It began with a teenage local burning Brick on a wave. Their boards collide and the local’s board breaks. When Brick is paddling back out, he gets in the way of another teenage surfer, who yells at him to “get out of the f…ing way.” Then a third teenage surfer yells at him, “This is a locals’ beach.”

Brick told him, “I know you guys are good and I’m new. But my parents weren’t rich, so I didn’t grow up next to the beach.”

Brick and Crismond said they were taken aback by the verbal abuse because they had been on good terms with the three teenagers during the eight months they had been surfing at the pier. 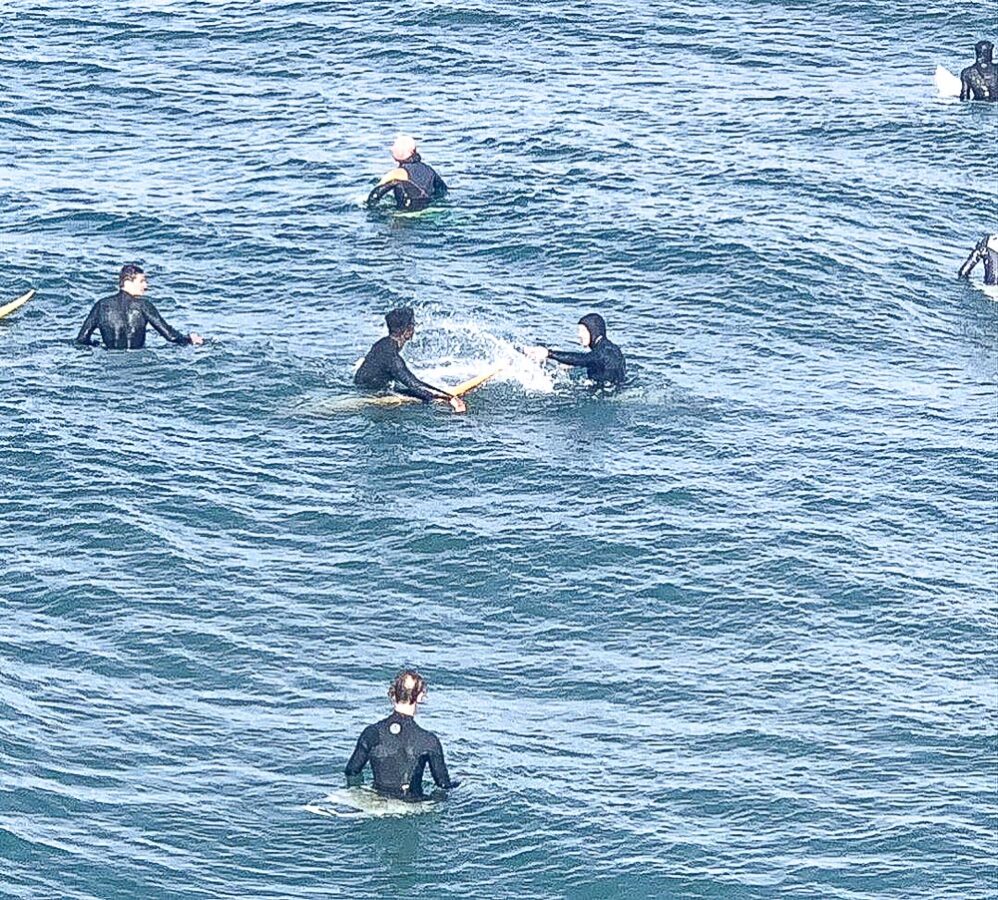 Justin “Brick” Howze being confronted by an unidentified surfer at the Manhattan Beach Pier on President’s Day. Photo by Rashidi Kafelle

Then the middle-aged white surfer paddled over.

“He tells us, ‘You two go to El Porto,’” Brick recalls on the Instagram video.

After the white surfer calls him nigger, Brick fired back, “If you want to talk to me like this, paddle in my nigger.” 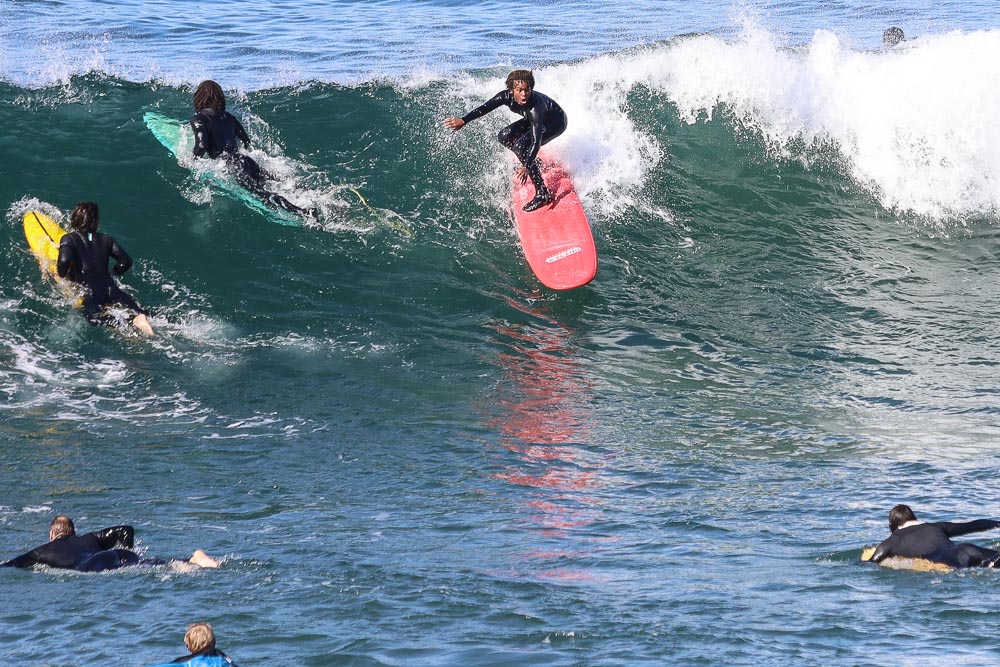 Mateo Canu, 13, proves he belongs in the lineup during Sunday’s Peace Paddle at the Manhattan Beach pier. Photos by Kevin Cody

“I couldn’t give him the liberty of showing…Someone saying nigger to me, I’m totally unaffected by that. The moment he realized the word was completely powerless, he said, ‘You donkey, go down to El Porto.”

“The easy answer was to punch him in the mouth. But I knew the headline in the papers would have been, ‘Young Black surfer punches old white surfer.’

“Instead, I looked him dead in the eye, and said, ‘I’ll be back tomorrow. You’re not running me out.’”

Crismond said after the older surfer called them nigger and donkey a few dozen times, he called them faggots.

“Who uses that word anymore?” Crismond wonders aloud on the video. 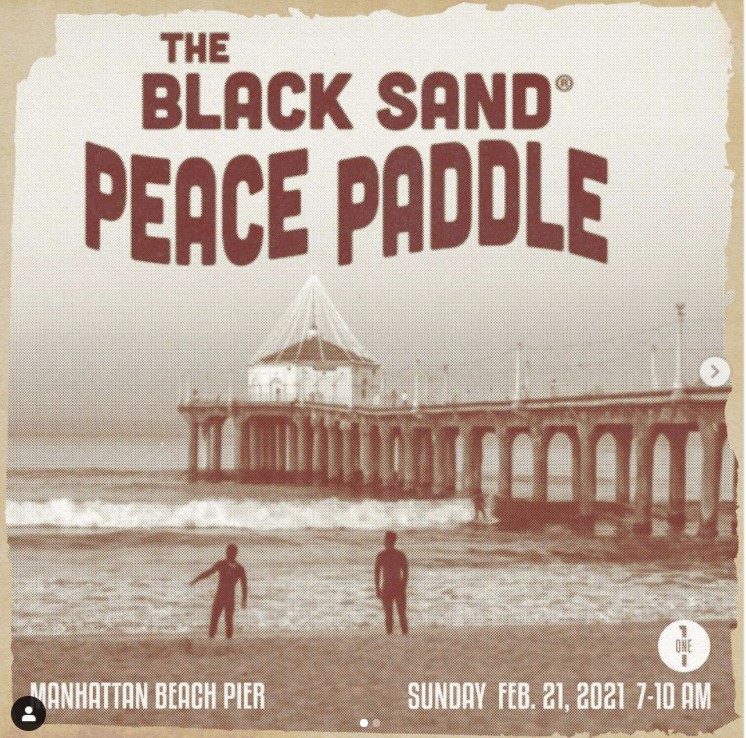 The teenage surfer who yelled at Brick for getting in his way later paddled over to him and said, “Bro, my bad. I didn’t mean that.”

The other two teenage surfers also apologized that morning, Brick and Crismond acknowledge on the video.

When they paddled in, an older Manhattan Beach resident, who had witnessed the confrontation from the pier, stopped them to apologize on behalf of his town. “We don’t tolerate that behavior in Manhattan Beach. I’ve never seen anything like it, before,” he said. The man then called to a lifeguard.

The lifeguard told Brick and Crismond, “We’ll keep an eye out, and tell the guy he’s not welcome back.” 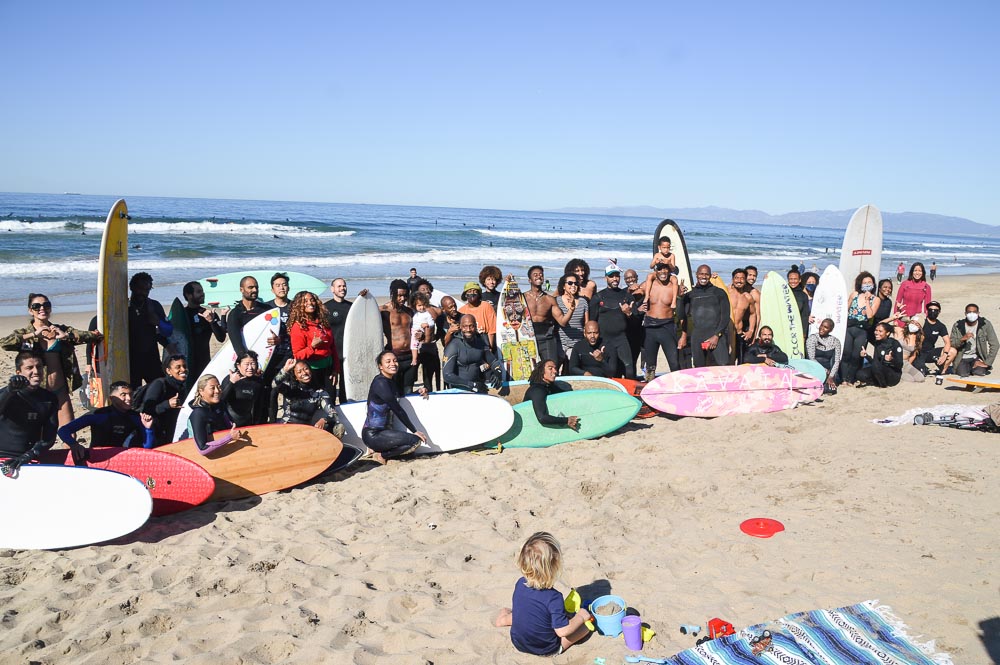 Over the following few days, Brick and Crismond used social media to promote a “Peace paddleout” at the pier Sunday morning. 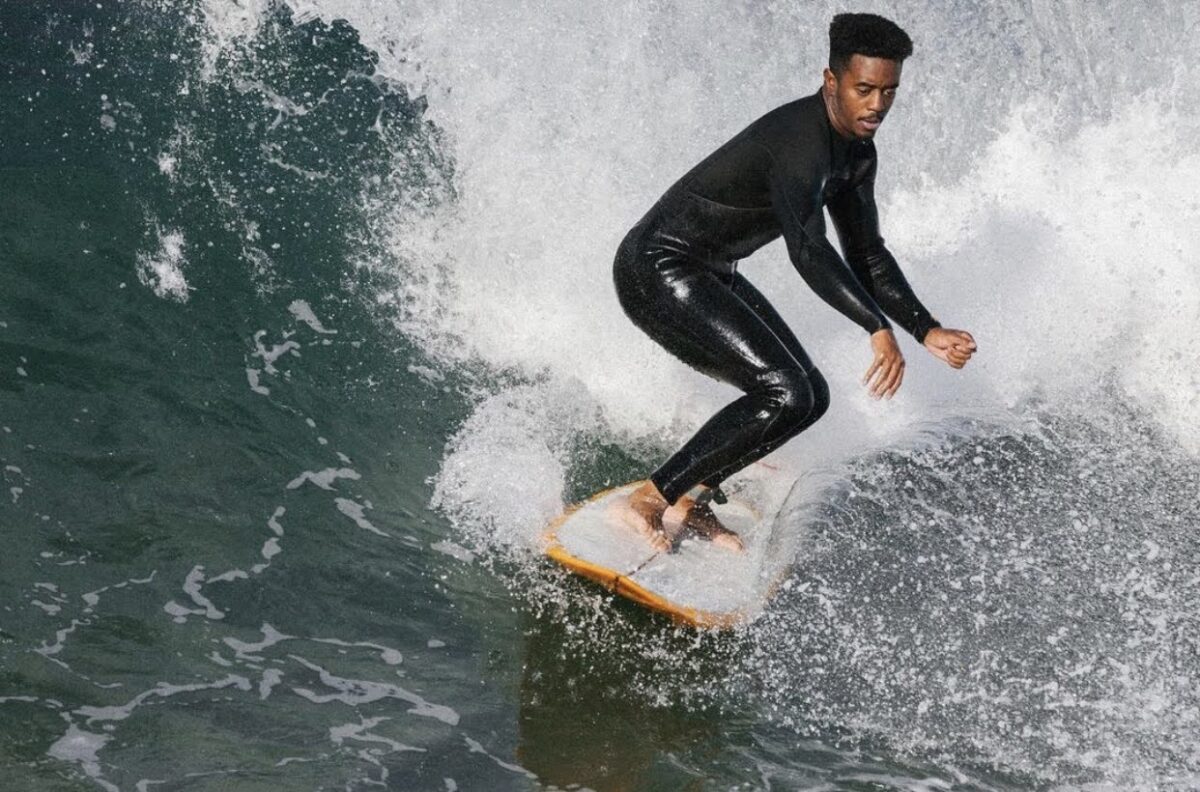 Among them was Ry Harris, a surfboard shaper and founder of EarthTech surfboards. Last year, following a paddleout in memory of George Floyd, Harris co-founded the environmental and social justice non-profit 1 Planet One People.

“The day after Brick and Crismond were threatened, my phone started burning up,” Harris told the crowd. “And I’m thinking, Why are people calling me? This isn’t a Black surfers’ problem. It’s every surfer’s problem.

Harris strove for an encouraging tone. “Surfers and the surf industry have been good to me. I’ve surfed in the South Bay for 20 years and no one has ever called me nigger in the water, though maybe that’s just because I’m a big, loud Black man.

“But what happened to these two young surfers at a spot I call home, and the fact that no one had their backs is an embarrassment. If you see something, say something,” Harris said. 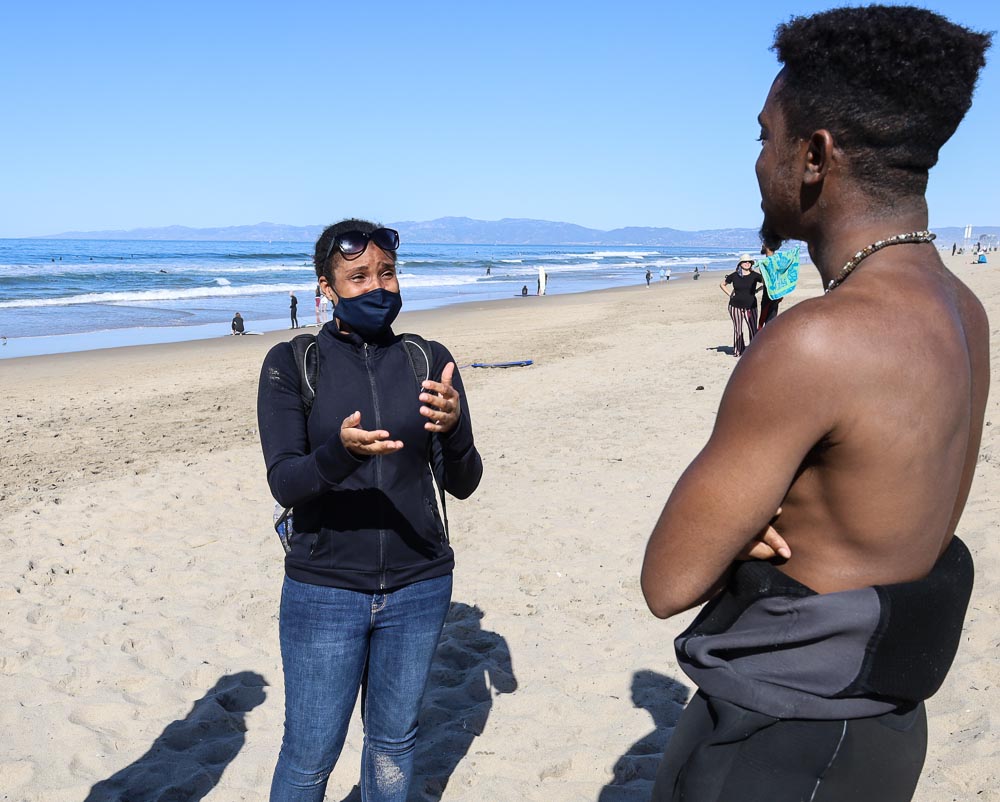 Master SCUBA diver Shanie Tennyson thanks Brick for motivating her to return to diving.

On the beach, after the protest, Shanie Tennyson, a Master SCUBA diver, who is Black, thanked Brick for inspiring her to return to SCUBA diving.

“I love teaching diving. But I backed away from it after someone told me I don’t belong. Because of today, I’m going back,” she said.

Reckoning at the Manhattan Beach pier

Black surfers Justin “Brick” Howze and Gage Crismond recount their President’s Day clash with several white surfers at the Manhattan Beach pier, which led them to organize a Peace Paddle at the pier last Sunday. The video was posted on Brick’s Instagram page.