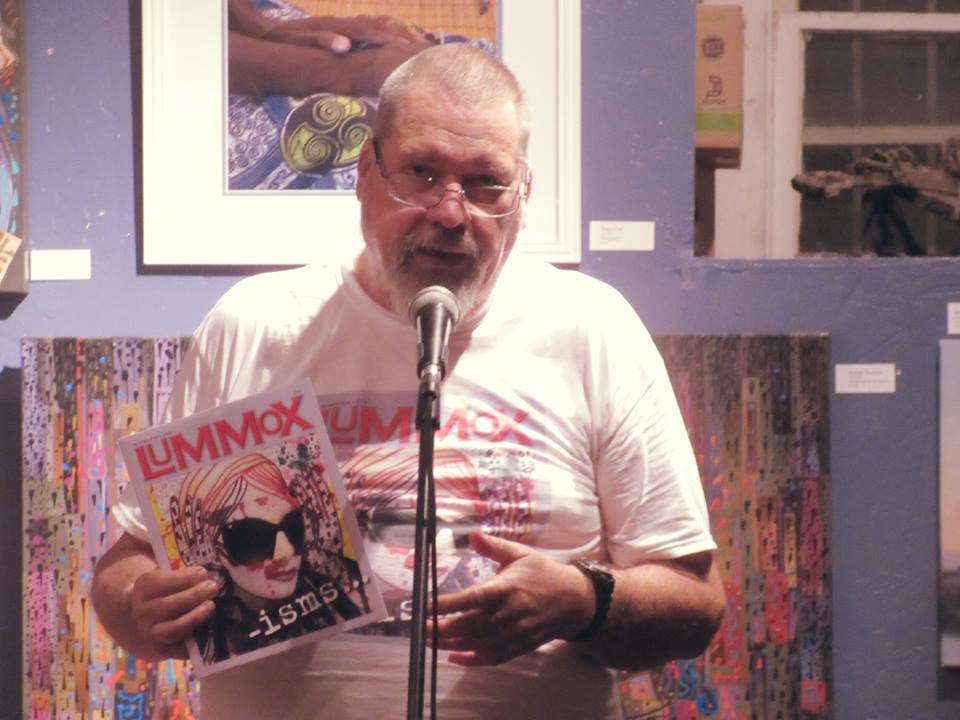 The “Lummox 6” poetry anthology is out; Raindog and company are reading their best works on Monday at the Redondo Beach Library. All photos courtesy of the artists

The “Lummox 6” poetry anthology is out; Raindog and company are reading their best works on Monday at the Redondo Beach Library. All photos courtesy of the artists

Getting the Word Out

On Monday evening, a poetry reading takes place at the Redondo Beach Main Library to celebrate the publication of “Lummox 6,” the latest yearly poetry anthology selected and edited and published by RD Armstrong, known far and wide as Raindog. The five poets who will be reading, all of them appearing in the latest anthology, reside in or near the Beach Cities: Linda Neal and Linda Singer are from Redondo, Elaine Mintzer is from Manhattan Beach (as is Raindog, though now living in Long Beach), Kit Courter is from Torrance, and Gil Hagen Hill is based in San Pedro. 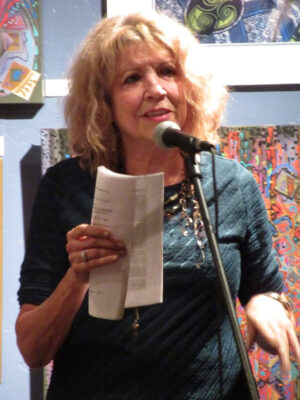 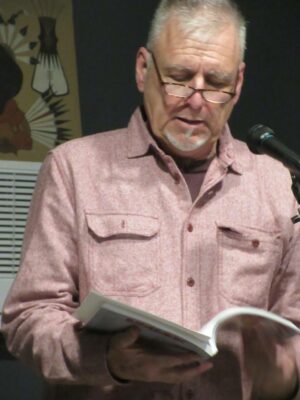 Raindog’s interest in poetry goes way back. As he recounted to this writer four years ago: “I went to Mira Costa High School and got my first taste of writing in the underground newspaper that I put out in ‘69 with my friends, and then in ‘70 I put out another underground newspaper with my girlfriend, just to bug the hell out of the people that ran Mira Costa a little further.”

Raindog has had some health issues, including diabetes which claimed one of his toes, but he says his health is improving, even if his finances are not. He also points out that he’s had some memory loss (possibly a bi-product of his diabetes, although his father suffered from dementia), and lastly mentions that he’s begun taking an antidepressant: “I’ve suffered with depression for nearly 50 years (great background for a poet but not so good for an aging person). It’s helping me a bit, and that’s all I can expect, since I’m living the life of an artist (just no garret or bottles of red wine, but still very poor).

“But it’s not as dismal as it sounds… I’m making it because of the kindness of strangers and my many patrons who support what I’m doing with the Lummox Press. If not for them, I’d be living out of a car at the far end of a Walmart parking lot!”

RD Armstrong is an unsung local treasure (different from but very much like JB Kennedy), and here’s a condensed version of our latest exchange prior to Monday’s event… 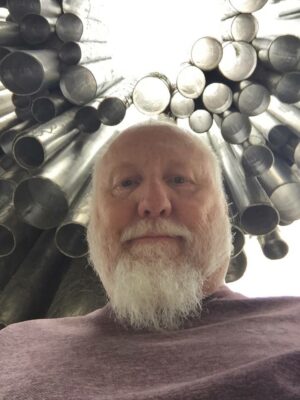 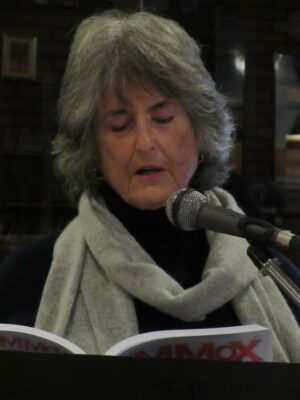 REELING IN THE YEARS

It’s probably common knowledge that poet Charles Bukowski and singer-songwriter Tom Waits have had a big influence on Raindog. There are many wordsmiths whose work influences him today, but…

Raindog: I’ve been in the trenches so long that it seems like every poet I’ve been influenced by would be unknown to your average reader. You have to remember that in any given year, between manuscripts and poems submitted for publication, I’m reading close to a thousand poems!

Are you writing as much as before? Have your themes or subject matter changed?

Raindog: No, I’m in kind of a funk when it comes to writing – have been there for a few years. Lost my inspiration to write, which is okay, since all around me there are beautiful, horrible, incisive and introspective writers who take care of all the emotions. Plus, listening to Trump and his cohorts doing their best impressions of Nazis while half the country applauds their BS, has been very off-putting (to put it mildly). Somehow playing chicken with North Korea doesn’t put me in a good mood either. You’ve been pretty much a one-person publishing house. Are you still publishing those little chapbooks? Or is the focus more on the annual Lummox anthologies?

Raindog: My layout/art director just celebrated 20 years working with me! But yes, I’m still essentially a one-man band. I can’t even imagine what it would be like to have someone else working for me; though, if the memory thing continues to deteriorate, there will come a time when I have to let this part of my life go. The idea of losing all this… stuff that I have worked on for the last 25 years makes me very sad. Mostly, because I haven’t reached that mythical wider audience yet… all my work’ll be in vain!

As for the Lummox anthologies, including the latest, Lummox 6…

Raindog: The Lummox Poetry Anthology is an outgrowth of the Lummox Journal which I produced monthly between 1996 and 2006. A typical issue of the Journal would have some poems, some essays, an interview and some reviews. There’d also be some artwork, an opening essay from yours truly discussing what was in the issue or some other thing that I felt the readership should know about; and the anthology now is like that little digest… on steroids! The biggest issue of the Lummox Journal was 56 pages… the biggest issue of Lummox was 246 pages! To my knowledge, nobody is covering the scope of the small press like the Lummox Poetry Anthologies are!

Raindog: The good ones are writing about the same things as 20 years ago, but with a greater understanding (they sometimes call it “wisdom”) and insight into our situation. The topics are pretty much the same, but the slant changes with age. I’m continuously amazed at the quality of poetry that I receive… granted, as I get older so does the pool of poets that submit work to me. I wish I could draw from a younger crowd, but I’m kind of stuck between a rock and a hard place, in that I solicit the best that the poet has to offer. Often times newer poets lack the experience, so I don’t hear from them in the first place. Another factor is that I publish what I like which means I may not be as objective as I should when it comes to accepting new poets into the family… I really do think of the poets that I have been publishing as family.

The human condition hasn’t changed all that much. Fashions and trends come and go, but the basic dysfunctions that plague us have been the same for thousands of years. Why do you think that old Willy the Shake still works? The basic plot is still the same. 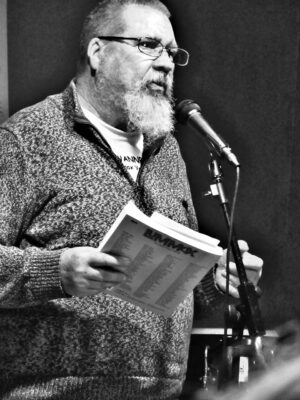 Apart from the subject matter, what makes someone a strong or riveting reader of poetry?

Raindog: Passion or a connection to the subject matter. I believe that one has to understand the weight of the words, if for no other reason than to be believed. The public wants an emotional experience, something that makes them “feel” something.

Now the big question, why should our readers attend your poetry event? What’s in it for them?

Raindog: I think that in this day and age, there is a need for connection. The way things are going, what’s trending now is a desire to be reassured, you know, that things will turn out okay. Unfortunately, our innate cynicism protects us from being misled (or so we think). So, the “trick” of modern poetry is to be easy to read to yourself or outloud. All the readers have experience in convincing the listener (some more than others) that their tale is true. If your readership desires sincerity, they’ll get it in spades at this reading. My readers are not phonies, they’ve lived and remembered the living to such a degree that I have faith in their believability. If your audience wants that, they’ll be happy.

Of course you’ll have books for sale!

Raindog: Yes, we’ll have copies of Lummox 6, plus the chapbook of the Poetry Contest winner; I’ll have tee-shirts and coffee cups… all part of the “brand”. So, I hope that people come prepared to spend some dough!

What’s next for Raindog? Tell me what you’ve got planned and what we can look forward to?

Raindog: Raindog? I’ll continue to buck the odds, while trying to survive this “growing old in America.” I’m working on a new book of old poems, entitled The Forgotten Poems. Of course the next Lummox starts up in April and that’ll involve poets from around the English-speaking world. Then I also am going to do a Canada-wide anthology… And there will be other books and chapbooks. Hopefully at the end of each day I will have made enough sales to survive a little while longer.
The Lummox 6 Poetry Anthology Reading takes place from 6 to 7:30 p.m. on Monday at the Redondo Beach Main Library, 303 N. Pacific Coast Hwy, Redondo Beach. Free, with free underground parking. Email poetraindog@gmail.com or go to lummoxpress.com. ER