“Lunana: A Yak in the Classroom” – Don’t talk back [MOVIE REVIEW] 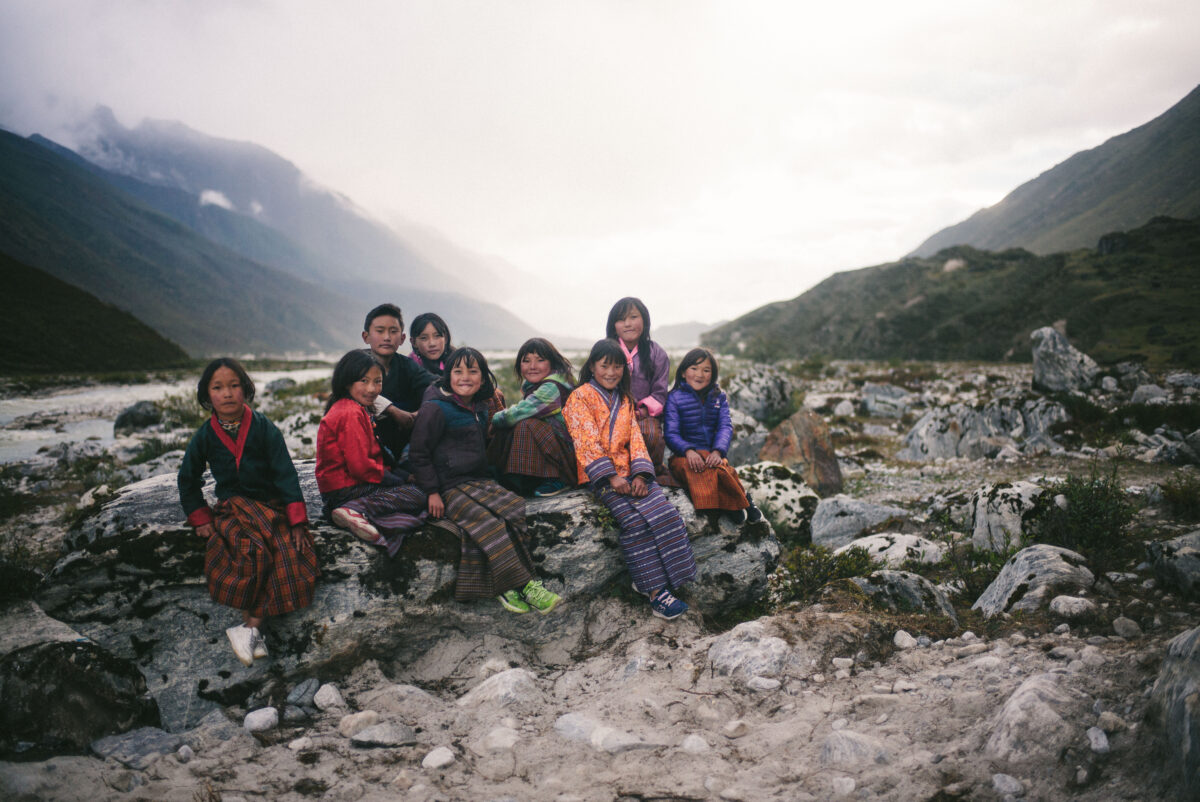 The students of Lunana in "Lunana: A Yak in the Classroom." Photo courtesy of Samuel Goldwyn Films. 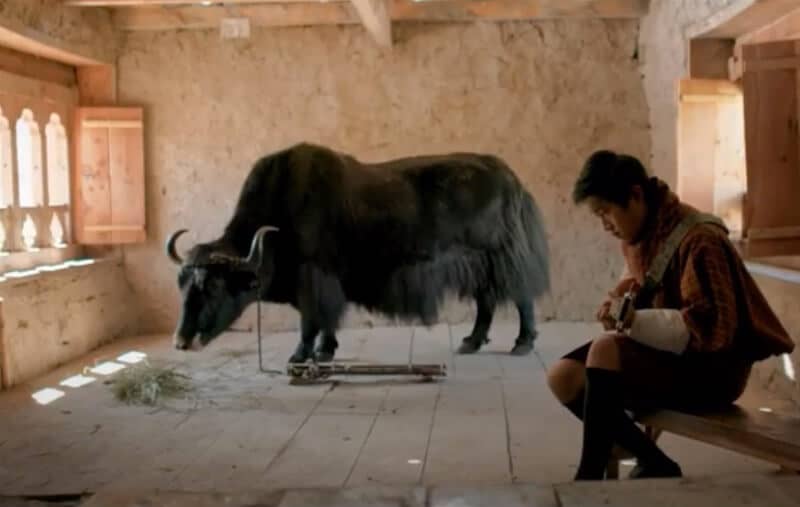 Sherab Dorji as Ugyen Dorji and friend in “Lunana: A Yak in the Classroom.” Photo courtesy of Samuel Goldwyn Films.

Slackers exist the world over and the tiny kingdom of Bhutan, nestled in the Himalayas between India, Bangladesh, and Tibet is no exception. Ugyen Dorji, twenty-something, chose a teaching career and entered a five-year training program. Chosen may be too strong a word because it very much appears to be a default position encouraged by his grandmother and the government. He dreams of an escape to Australia hoping to have a music career with more traction than he’d get in the limited environs of Thimphu, the capitol and largest city: population 114,551, elevation 2600 meters. Obtaining a visa to Australia is a pipe dream but he has applied, nonetheless. Still, the fifth year of his government teaching contract must be fulfilled. Disgusted by his disinterest, his supervisor has a surprise in store for him. His new assignment is as the teacher in the most remote school in the world, located high in the mountains in the town of Lunana: population 54, elevation 3400 meters.

Even getting to Lunana is a challenge for the clueless Ugyen who’s never even owned a pair of hiking boots. Singing in bars requires an entirely different wardrobe than he now finds necessary. Lunana is a half day trip by train to Gasa: population 3,117, elevation 1500 meters. From Gasa it is an 8 day journey on foot through mountainous terrain that is almost entirely uphill.

Ugyen is met in Gasa by two guides. Along the way they stay in “guest houses” and tents. Still more than a half day from the village, they are greeted by the town elder, Asha, the children awaiting their teacher, and their parents. In short, most of the village has come to greet him.

Ugyen, exhausted and angry after such an arduous journey, is further disillusioned. When he finds his home it’s a one room shack with paper covering the windows for insulation. There is a primitive stove, a mattress, and an outhouse yards from the house. Food is rudimentary and villagers have all contributed to the milk and cheese that will sustain him. There is essentially no electricity, so no contact with the outside world. No phone, no texts, no iTunes. Brought to the school where the students eagerly await him, he discovers a building, not unlike his shack, totally lacking teaching materials or even a blackboard. His mind is made up. He must return to Thimphu immediately. Immediately is not possible, but perhaps in a few days. 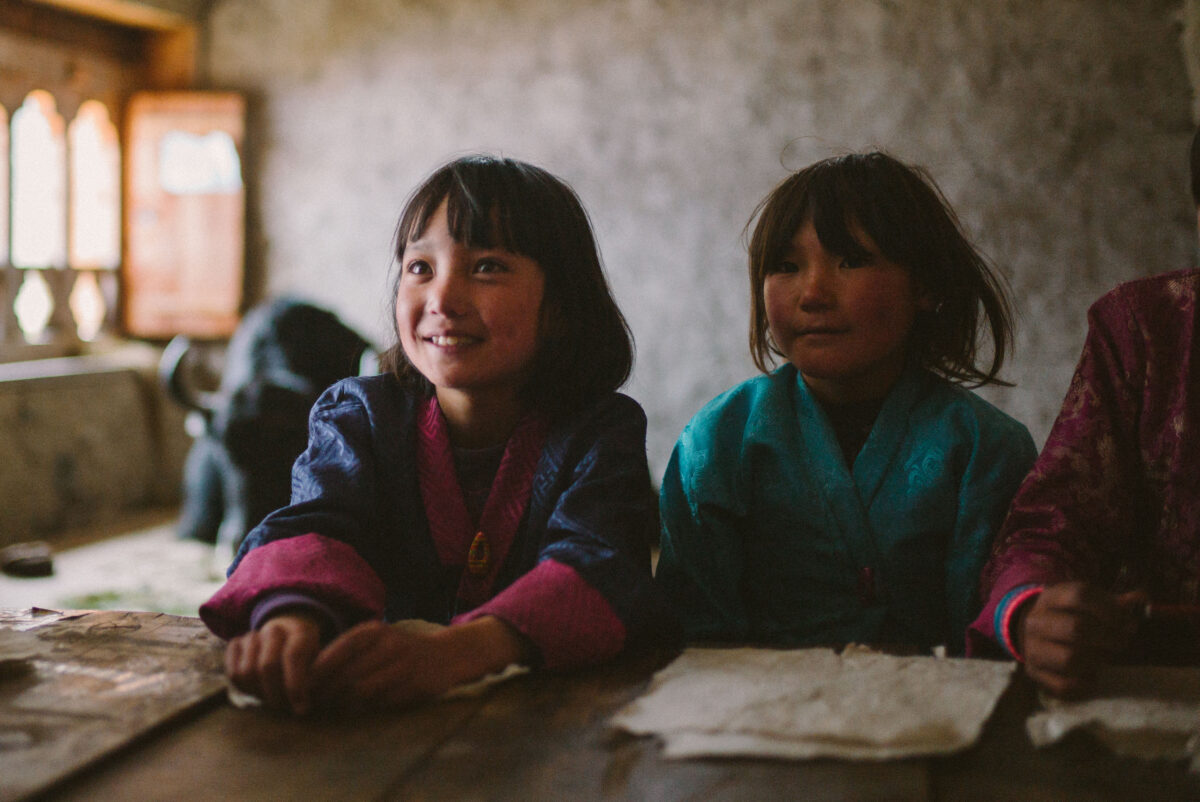 Pam Zam in “Lunana: A Yak in the Classroom.” Photo courtesy of Samuel Goldwyn Films.

The enthusiasm of the students and their desire to learn challenges him and he begins to put together rudimentary material. These kids have aspirations like everyone else. As Asha has explained, it is his desire that this generation be offered more in life than to remain as Yak herders. Ugyen begins to find the lyricism in this isolated life, not just in the eyes of his students but also in the music of the herders who sing a hauntingly beautiful song that he longs to add to his repertoire. Adjusting to day to day life, he learns to collect the Yak dung that will ignite the fire in his stove and heat his shack. Kindling is in short supply and paper is too precious to burn. Before realizing that dried Yak dung is everywhere, he has a hilarious encounter with the fresh material.

Ugyen finds imaginative ways to reach his eager students and is surprised to discover depth within himself. As progress is made, the question is whether he will remain when the punishing winter comes or whether, like the teachers before him, he will return to his previous life. The answer itself illustrates his new found depth.

Directed and written by Pawo Choyning Dorji and filmed in the village of Lunana using only available solar power by Jigme Tenzing, the honesty of this story is further enhanced by the first time actors performing in the film. Sherab Dorji paying Ugyen is a musician who, like his character, contemplated migrating to Australia to further his career. Pam Zam, playing herself, is a 9-year-old charmer who portrays the student. Like her, the children are all villagers who were chosen to play a variation of the life they live in Lunana. The authenticity of this story, written and directed by Dorji is stunning and thoroughly engaging. He has found a new way to explore a coming of age story that is far from trite or expected.

“Lunana: A Yak in the Classroom” had been put forth as the Bhutanese entry to the Oscars in 2020. The rules of the Academy of Motion Picture Arts and Sciences demand that an officially recognized committee present the film. Bhutan had not submitted a film for consideration since 1999 and no longer had such a committee. Regrouping for 2021, they formed the necessary committee and tried again, making it one of the only films to have been submitted for consideration in two separate years. Like Ugyen, the journey of this film has been eye-opening and full of difficulties to overcome. Presently it is on the short list for consideration in 2021. It’s definitely worthy.

In Dzongkha with English subtitles.

Opening January 21 at the Laemmle Royal.