M is for Marijuana and Money in Hermosa Beach election 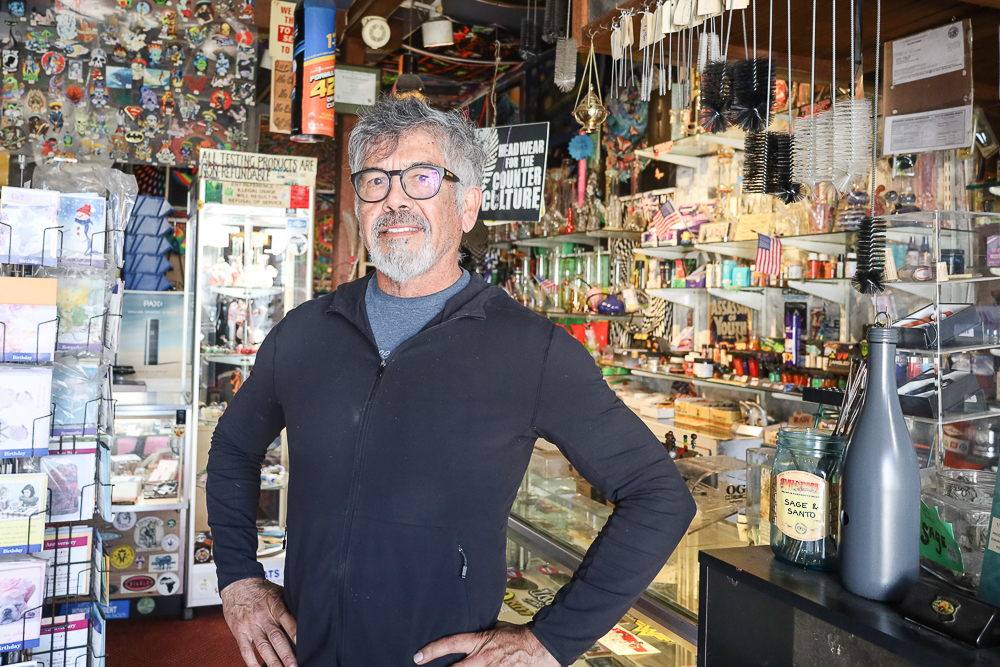 Daniel Herrera knows as much as anyone about cannabis sales. He has owned Hermosa Smoke and Gift since 1976. Photo by Kevin Cody

Hermosa officials were not receptive to Spiker’s arguments.

“No resident has ever asked me to allow cannabis sales in the city,” Mayor Detoy recalled telling Spiker.

Spiker responded to the Hermosa officials’ indifference by saying his group would ask voters to lift the ban.

Last October, EDRCSC began gathering signatures in the three Beach Cities, and El Segundo to put cannabis initiatives on the upcoming November 8 ballots. Signatures were required from 10 percent of the cities’ voters. In March, EDRCSC submitted 1,650 Hermosa Beach signatures to Hermosa City Clerk Myra Maravilla, well over the 10 percent, or 1,421 signatures, required to qualify for the November 8 ballot.

If approved, the Hermosa Beach Cannabis Regulation and Public Safety Measure, also known as Measure M, will require the City of Hermosa to issue at least two business licenses to qualified cannabis retailers. And to give exclusive cannabis delivery rights to the two licensed cannabis retailers.

According to campaign finance reports, as of September 24, EDRCSC had spent $75,000 in support of Measure M. HB Residents against Measure M had spent $1,951.

In Redondo Beach, as of September 24, EDRCSC had spent $214,000 in support of its Measure E. The Redondo cannabis measure failed in a special election last Wednesday, by a vote of 75 percent opposed, and 25 percent in favor.)

State Assemblyman Al Muratsuchi, a Democrat, said he was out of town when his party voted to support the cannabis measures. He sent party leaders a letter protesting the endorsements.

The Beach Cities Democrats responded to the endorsements by voting to oppose the local pro cannabis measures.

“The L.A. County Democratic Party failed to ask any of the six Redondo Beach elected officials, who are Democrats, what their positions were on this measure,” Redondo Mayor Bill Brand said. 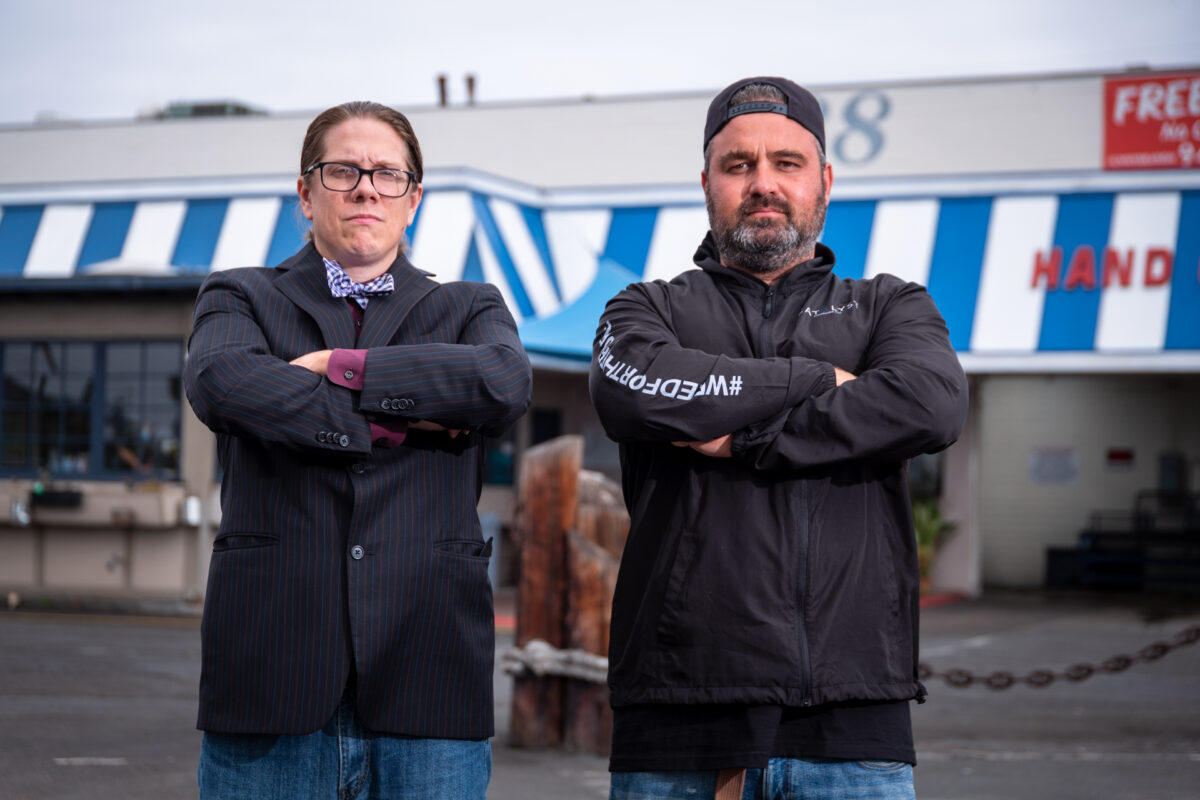 “I have helped to shape beneficial, and reasonable, local cannabis policy in Southern California, and my regulatory language has become the law of the land in multiple cities, including Culver City, Pomona, and El Monte,” Martin told Easy Reader last November.

This week, Martin responded to questions about Measure M with an email, which states in part:

Daniel Herrera would like to apply for one of those two licenses (“pending approval from my wife,” he said). Herrera understands cannabis retail at least as well as any other Hermosa Beach business owner. He has owned Hermosa Smoke and Gift, on Hermosa Avenue, at Second Street since 1976. His store sells cannabis paraphernalia, including pipes, rolling papers and incense.

Among Measure M’s applicant requirements are:

Attorney Martin, in his email response, explained that Measure M’s financial requirements “will only result in the selection of permit winners that are certain to successfully develop and operate highly regulated cannabis dispensaries…”

“Measure M’s requirement to show $400,000 in liquid assets,” he explained, “is to ensure that applicants actually have the funds to back up their proposal and successfully establish their business . . . in fact, and given its importance, providing proof of funds/capitalization is standard in nearly all California dispensary ordinances. Measure M’s scoring criteria of showing $3.5 million in gross receipts is worth 150 points to award applicants with a proven track record of successful operations . . . Measure M only wants successful operations in Hermosa Beach.

Among the reasons for the council’s opposition is that Measure M prohibits the council from imposing CUPs (Conditional Use Permits) on cannabis retailers. CUPs are commonly used to impose hours of operation, and other conditions on businesses.

The council also objected to the absence of a cannabis business tax in Measure M. To address this omission, the council placed Measure T on the November ballot, which would impose a business tax of up to 10 percent on cannabis sales.

The city issued a press release about the report on October 15.

“The provisions of Measure M provide a one-size-fits-all policy, tailored specifically to benefit the cannabis-industry sponsors, and are almost identical to initiatives on the ballots in other South Bay beach cities,” the report begins.

It goes on to caution, Measure M:

The report further argues, “The existence of a cannabis retail outlet has been associated with increases in nuisance-related crimes, [according to] a recent study published in the Journal of Regional Science and Urban Economics.”

The staff report stops short of asking residents to vote No on Measure M. State law prohibits taxpayer dollars from being spent on ballot measures.

Instead, the report concludes: “For the reasons described herein, the City of Hermosa Beach encourages voters of the electorate to carefully weigh the merits of Measure M and determine whether the ordinance represents objective and responsible local policy.”

Measure M is also opposed by HB Residents Against Measure M. The group has rallied opposition through social media, lawn signs and letters to the editor. They argue that cannabis stores would have a socially corrosive effect on Hermosa.

Former council member Carolyn Petty, a leading member of the group, wrote in a recent Easy Reader Letter to the Editor, “Dispensaries have large amounts of cash, and product that entice criminals.” She further argued, “Cannabis companies have unlimited resources. They do not believe in limits to the number of dispensaries, and have the resources to litigate for years, forcing us to eventually acquiesce, and increase the number of dispensaries beyond two…. More disturbingly, recent exposes by the LA Times uncovered the political corruption currently happening in other jurisdictions as cannabis companies vie for the limited number of licenses.

Something for everyone,
except in Manhattan Beach

Last Thursday, following the failure of EDRCSC’s Measure E in Redondo Beach’s special election, Catalyst’s Lewis acknowledged on Instagram, “It’s not the result we wanted.” But he then made the argument that the Redondo council’s recent approval to allow two cannabis stores in the city was a response to EDRCSC’s ballot initiatives.

“Redondo Beach now has access [to cannabis retailers], and Catalyst is responsible for that,” Lewis said.

Following the November 8 election, Lewis will be poised to make a similar claim about Hermosa, whether or not residents approve Measure M. Though Hermosa’s council has not lifted the ban on retail cannabis sales, it did, effective October 13, lift the ban against cannabis delivery. The purpose was to deprive EDRCSC of the argument that cannabis sales will remain illegal in Hermosa if Measure M fails.

The Manhattan Beach City Council, in contrast to Hermosa and Redondo, adopted a winner-take-all strategy in its opposition to Measure MB. Taking a page from EDRCSC’s playbook, Manhattan’s council placed Measure V on the November 8 ballot. Like Measure MB, Measure V will remain unalterable, even by the council itself, absent a repeal by voters.

But instead of legalizing cannabis sales, Measure V will ban its sales. If both Measure MB and Measure V are approved, the measure with the highest vote count will prevail. ER