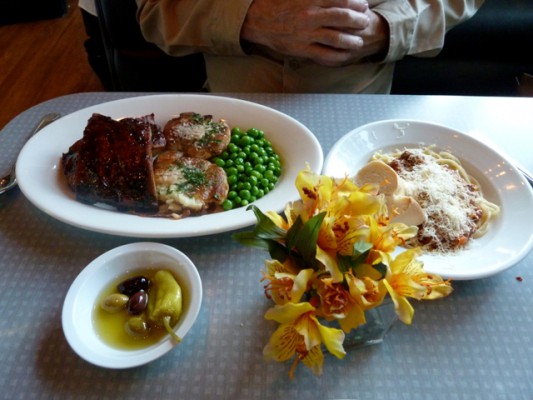 The photo of Mama Terano is a bit faded, and diners might wonder why the owner of a popular restaurant didn’t have a better one to hang on the wall. The clue is on the frame – the elderly Italian woman smiled for the camera in 1960, and didn’t live to see the restaurant with her name on the awning. Chef-owner Robert Bell named the place in the honor of his grandmother, who awakened his love of good cooking.

That naming decision tells you more about this restaurant than anything else in Bell’s career – if you are looking for the eclectic food he pioneered at Chez Melange, look elsewhere. This restaurant recreates the flavors of Brooklyn Italian kitchens, and Bell and partner Steve Riley do a remarkable job of it. That authenticity spikes on Sunday, when the restaurant offers a five-course family supper for the bargain price of twenty dollars.

We visited on Sunday for our first experience and immediately nominated it as the best gourmet bargain in the South Bay. On that night the menu was antipasto salad, spaghetti with meatballs, salad with artichokes, roasted red peppers, and arugula, braised short ribs with mashed potatoes, and a cinnamon-walnut rotoli for dessert.

(In theory there are no substitutions, just as there wouldn’t be at grandmother’s table. Since grandmothers make allowances for errant nieces and nephews who don’t eat meat, there are always vegetarian options, though they are not listed.) 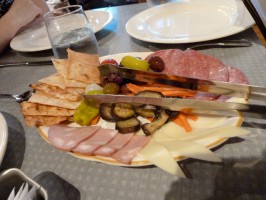 The antipasta at Mama Terano. Photo by Richard Foss

Since the menu was established from the moment we walked in, food started arriving without delay. The antipasto was bountiful, a plate of artisan sopresata, mortadella, cheese, olives, pickled vegetables, and flatbread – and they brought out a separate small plate for the vegetarian at our table. The spaghetti that followed (meatballs for carnivores, marinara for the pure in heart) was nothing like the dull dish usually served in LA – the meatballs and sauce were fragrant with herbs, the pasta cooked just a bit past al dente but not mushy. Slow cooked sauces can make simple things glorious, and it reminded us of how these things came to be popular in the first place.

The salad seems at first glance like a much more modern item, but isn’t – the ancient Romans made salads with arugula and artichokes, and as soon as Columbus brought back bell peppers those were grilled and tossed into the mix. The balance of strong flavors was interesting and successful – the dusting of parmesan cheese and the light vinaigrette tied everything together and moderated the sharpness of peppers and bitterness of arugula leaves.

We had indulged in the starters and wondered if we would have room for the main courses, but when they arrived our hunger reawakened. The short ribs were fork tender in a brown gravy with hints of nutmeg, and our companion’s vegetarian lasagna was the best meatless version of that dish that I can remember having. The cinnamon pastry topped with ice cream and walnuts was small, but perfect. The whole dinner was an excellent recreation of a meal with a grandmother who thinks that only too much is ever enough.

We returned on a weeknight to see if the regular menu was of the same caliber, and the experience was different but still delightful. We had to choose from an amazing variety of starters that included some rustic Southern Italian dishes – fried garbanzo beans with lemon, anyone? My wife was attracted to a flatbread topped with speck (cured pork), mushrooms, gorgonzola, and red onion, so we ordered one to sustain us while we investigated the rest of the menu. 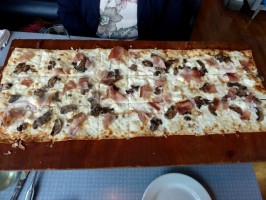 We had expected the usual flatbread pizza that is a bit larger than a piece of pita bread, which means we hadn’t grasped portions as conceived by Robert Bell’s grandmother. What arrived was a cracker-thin crust about two feet by ten inches with generous but not excessive toppings – enough for flavor, not so much that the crust got soggy. It was delicious and big enough for three or more people and we had to stop ourselves well before halfway to have enough room for the rest of our meals.

This went double because we had been interested in another item, the spaghetti with “Mama’s gravy” – we wanted to see what sauce could earn the honor of being associated with the namesake of the restaurant. I had been considering ordering it as a main course before noticing that it was available in a “small” portion (by now you can probably guess that their idea of small isn’t very). Mama’s gravy turned out to be a Bolognese, a rich tomato sauce with what appeared to be both ground and shredded pork. We enjoyed it but had tried only a bite or two before our main courses showed up – the only hiccup in what was otherwise excellent service and kitchen timing.

My wife had selected spaghetti topped with seared ahi tuna and pesto along with tomato, olives, capers and eggplant, while I picked pork spareribs with a balsamic glaze along with smashed potatoes and English peas. The ribs were good but not what I expected; tender and tasty, but the sweet and sour taste of the sauce made them seem more Polynesian than Italian. If you like sweet ribs then these are going to be right up your alley. I was more impressed with the sides – pieces of baked potatoes that had been flattened and pan-fried so they got a delicious golden crust, then topped with herbs and cheese, and fat peas that had been cooked unadorned. 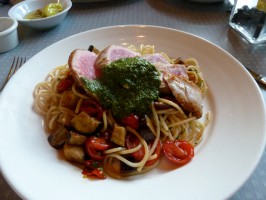 The tuna pasta was a sensory delight, a beautiful piece of fish with a pink center partly obscured by vivid green basil sauce that sent fragrant promises of delight. At $15, it was one of the most expensive items on the menu, and completely worth it. The vegetables, fish, and sauce offered several distinct flavors to combine, and we thoroughly enjoyed the variations as we ate.

On our previous visit to the restaurant we had tried some premium wines by the glass – a Rombauer cabernet and an intriguing Palmilla Dolcetto red blend. On this visit we decided to try something fittingly rustic – the house Trebbiano with our starters and Chianti with dinner. A “quarto” flask that held just under two glasses was a mere seven dollars for the white, eight for the red. The Chianti was a solid traditional red that suited the hearty dishes, the Trebbiano unexpectedly good with fruity notes, and I’d have either again.

We had considerable trouble ordering our entrees due to the wide range of choices, so were surprised by the comparative sparseness of the dessert menu: only three items were offered, all based on gelato, chocolate, and sweet sauces. We had been in the mood for something lighter, a tart or a pastry similar to the ones we had tried on our first visit, so we found it easy to decline.

The food at Mama Terano is miraculously good and inexpensive, making this little restaurant on a side street the kind of find that you show off to friends. It is obviously a labor of love and a gesture of respect for the traditional made from scratch cooking that can foster a lifelong appreciation for good food.