“Mamma Mia: Here We Go Again” – How can I resist you? [MOVIE REVIEW] 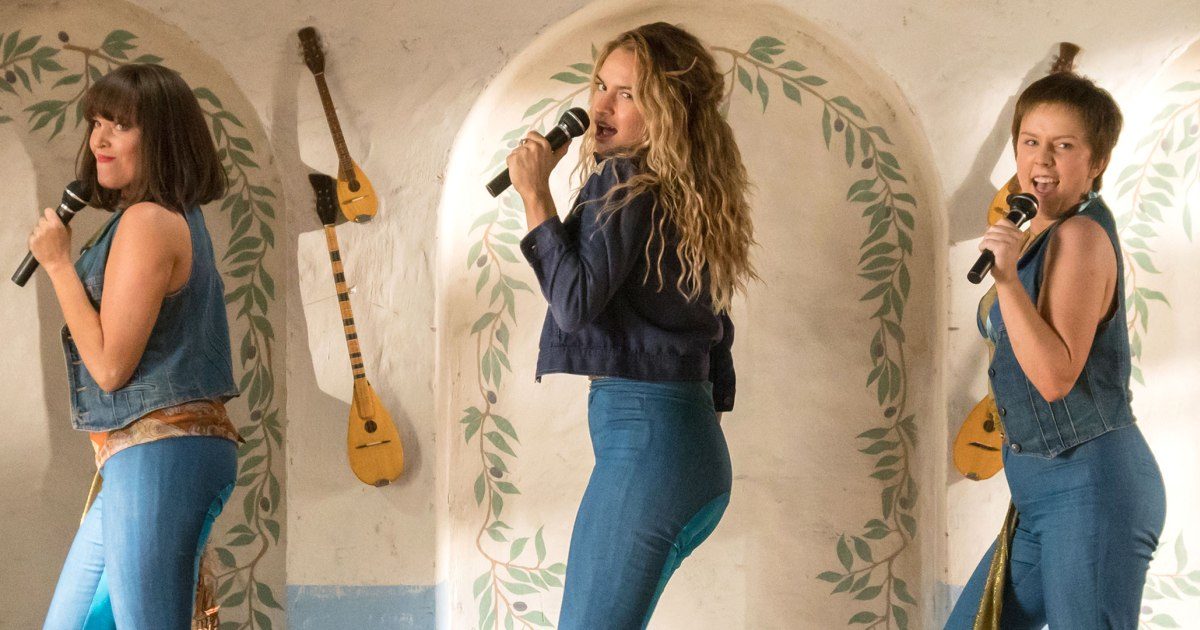 I really wanted to hate this movie; I really did. The first was such a perfunctory visit to a karaoke bar where no one was quite drunk enough to pull it off. And the opening of “Mamma Mia: Here We Go Again” is not promising. Sophie (Amanda Seyfried) is moping. As she prepares for the grand opening of the family bed and breakfast into a destination hotel, she can only focus on the fact that this is the one-year anniversary of the death of her mother Donna. Spoiler alert! Yes, folks, Meryl Streep is dead in this film (the last one probably killed her), although never fear, there will be an appearance. Sophie has put everything in the hands of her major domo, Fernando (played by a moribund Andy Garcia) who attends to the final details and sends out the formal invitations for the party.  Sophie relies on the support of her step-father and one third real father Sam (Pierce Brosnan). Husband Sky (a charming and warm Dominic Cooper) is in New York gaining hotel experience and is faced with a dilemma; he’d like to stay. Oh woe is Sophie, and, I thought, oh woe is me.

How wrong I was. As the production manager of “Mamma Mia” in London told me, way too many years ago to admit, “Check your brain at the door.” Well, this is my advice to you because the minute we leave the Greek isle of the mournful Sophie, we are transported back to the Oxbridge graduation of young Donna (Lily James) where she and her two girlfriends, Tanya (Jessica Keenan Wynn) and Rosie (Alexa Davies) aka the Dynamos, somewhat inexplicably, get up on the staid platform and launch into a rollicking version of “When I Kissed the Teacher.” It only gets better from there and you’ll soon be rocking to the music as you follow the adventures of the young Donna as she begins her search for the meaning of life in exotic places, meeting the young versions of Harry (Hugh Skinner), Bill (Josh Dylan), and Sam (Jeremy Irvine). 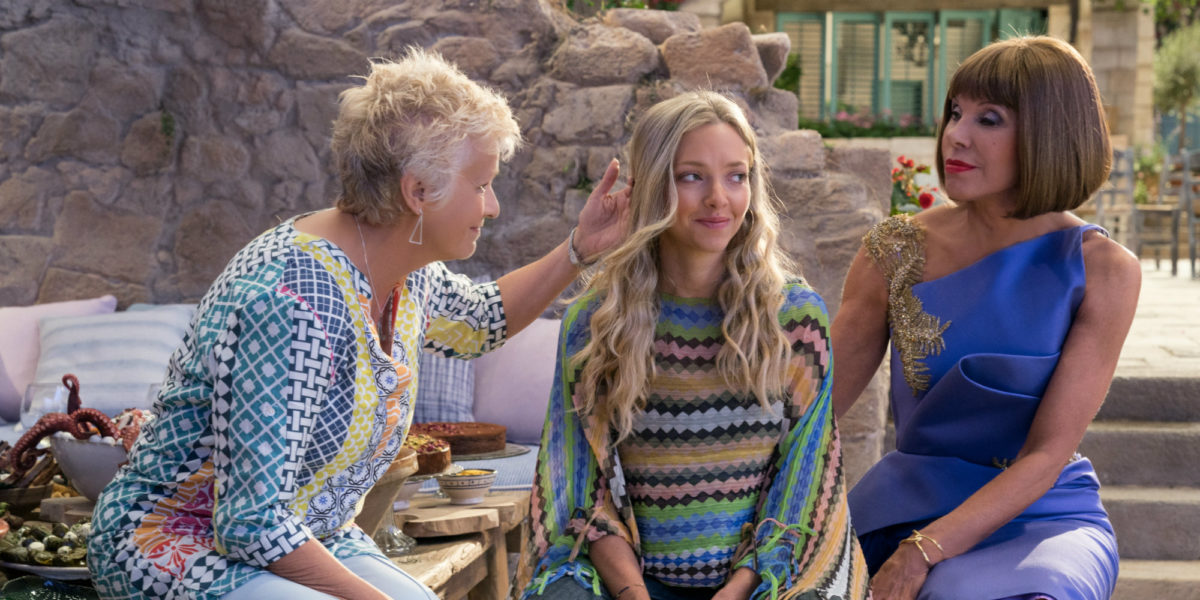 Interwoven with this wonderfully written, acted, and sung origin story, is the present-day dilemma of Sophie as things seem only to fall apart. But to the rescue, not just of Sophie, but also the present-day storyline, come the Dynamos, Tanya (Christine Baranski) and Rosie (Julie Walters) ready to drink, party, reminisce and comfort. Their mere presence is enough to make a miser loosen his purse strings. And any screen appearance of the missing dads Harry (Colin Firth) and Bill (Stellen Skarsgård) is welcome relief. Add to that the unexpected arrival of Cher on the scene playing a reluctant grandmother and you have the pot fully stirred.

Suffice it to say, a good time (really a terrific) time is had by all, including the original players, Baranski, Walters, Skarsgård, and a truly hilarious Firth. I think you’ll enjoy this as much as they apparently did. 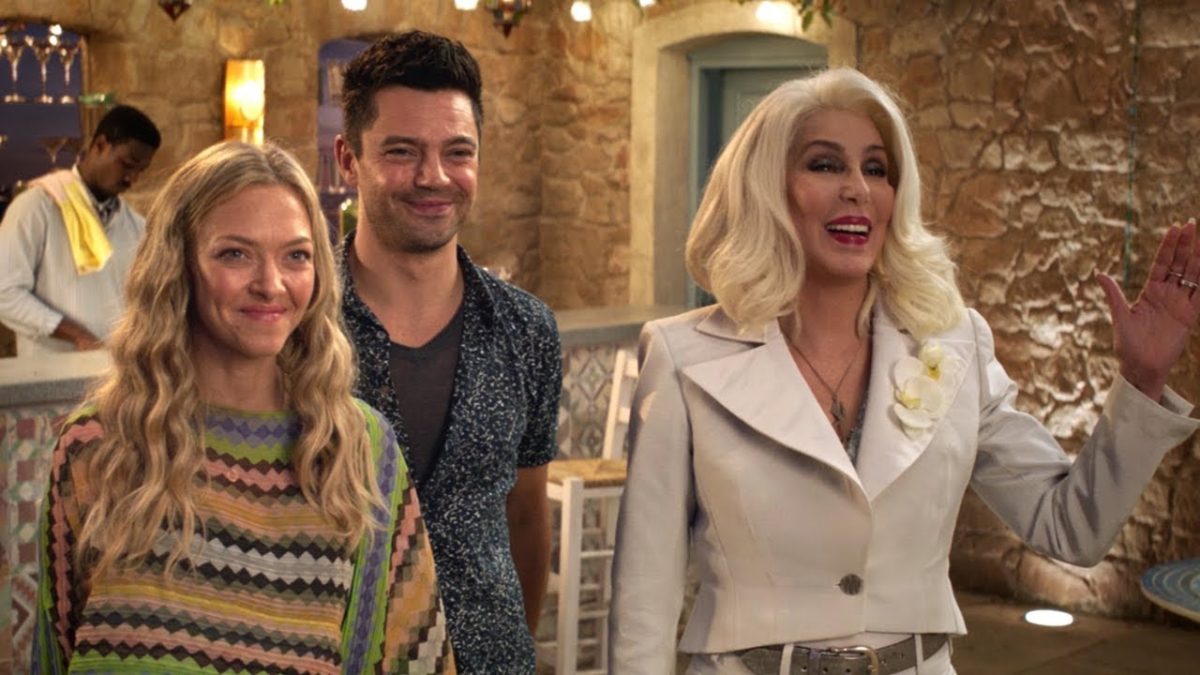 If there are any real surprises here, and just the pleasure of this film is a big one, it is Lilly James who plays the young Donna. Who knew that the “Downton Abby” actress was a fabulous singer? She and the young Tanya and Rosie steal the film.

Ol Parker has directed with panache. The story was co-written by Richard Curtis (any latent sophistication in the script is, no doubt, due to him) and Parker, who also wrote the screenplay. Parker has done a really fine job in weaving the origin story into the plot, no easy task. The editing (Peter Lambert) is seamless, fully propelling us back and forth into the past.

This sequel, unhindered by the expectations of source material, works on so many levels that the original didn’t. Mainly, it works on the mindless fun level with good music to boot even if some of it doesn’t rise to the level of the known hits.

So, as I was told and am telling you, leave your brain at the door and just enjoy the film and the music. It’s Abba! What’s not to love?