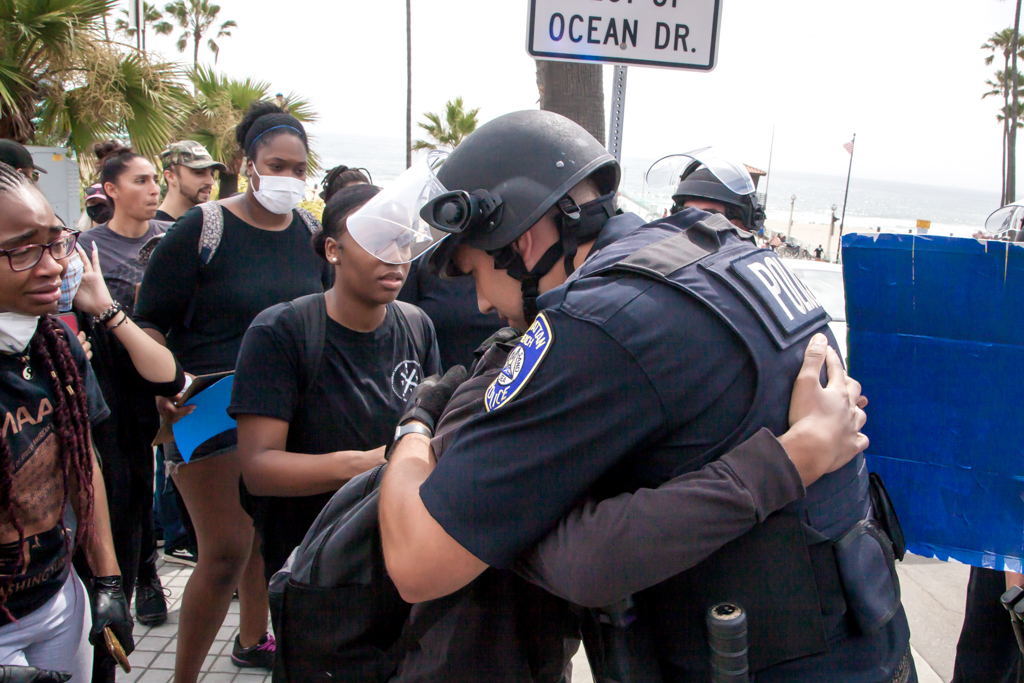 A Manhattan Beach community forum and panel discussion to discuss policing and community partnerships in light of the Black Lives Matter movement sweeping the nation has been scheduled for July 9.

The forum was organized by a committee led by Abell and Councilperson Hildy Stern and grew out of discussions the police chief had with activists Williams and Feliciano, who were two of the four organizers of the June 2 BLM protest at the Manhattan Beach Pier.

There was some debate Tuesday about whether the forum should be conducted as a council meeting and who should participate.

Councilperson Steve Napolitano said the council needed to be a part of the gathering so if suggested policy changes arose, they could be acted on.

“This is not something that we’re doing to check the box,” he said. “So if there’s going to be things coming out of this, I think that having council there and being seen as active or at least in the lead of this is important.”

“We’re not necessarily panelists, because we benefit from learning at this point,” Stern said.

Councilperson Suzanne Hadley objected to the inclusion of BLM activists, and suggested that American Martyrs, the large Catholic parish in town, be included.

“Black Lives Matter attendees for me are a non-starter if we do go with a forum,” Hadley said.

Resident Lee Phillips, who is African American, also objected to the inclusion of BLM activists.

“I think BLM is divisive,” Phillips said. “It already sets the tone for the conversation.”

Resident Heather Kim said MBPD did not need to be subject to any discussion of policy changes.

“Are we making a problem where there isn’t one?” Kim asked. “… I love our police department. I think Chief Abell has done a fantastic job, and I don’t think anybody can dispute that. So I’m not quite sure what more Manhattan Beach Police Department can do for the city of Manhattan Beach.”

Abell, the city’s first African American police chief and a broadly popular public figure who has worked for three decades in the community, defended both the forum format and the topics. The chief said he looked particularly forward to talking about MBPD training, recruitment, and policy, but emphasized that policing is not a topic that is separate from larger community issues.

“This is not just about policing. I understand what happened 1,800 miles away,” he said, referencing the death of George Floyd. “And we want to talk about policing practices and training and things of that nature…I have a lot to say. But that said, our candidates and our employees who work for our department don’t just fall out of the sky. They come from the very communities that we serve.”

“And so when I talked about those other elements of the community…[It is] where they’re raised at an early age, where do they go to school, where do they go to church, where are they working in businesses before they even enter the police department? And so do any of these entities have a role in this conversation about how, if at all, we can do a better job as we have this discussion about implicit biases or racism whatever the conversation may be. This is a very uncomfortable conversation for everybody.”

The Council agreed to Hadley’s suggestion to add a representative from American Martyrs and Stern agreed with her suggestion to ask former mayor Joyce Fahey, who is also a former Superior Court judge, to serve as moderator.

Fahey, who was previously known as Joyce Karlin, was the presiding judge in the trial of Soon Ja Du. Du owned a grocery store in South Los Angeles, and in 1991 she shot and killed Latasha Harlins, a 15-year-old Black girl whom Du accused of trying to steal a bottle of orange juice. Du was convicted of voluntary manslaughter, but Fahey sentenced her to five years’ probation and no jail time. The sentence was appealed by then District Attorney Ira Reiner, but ultimately upheld by a higher court. The killing came two weeks after Los Angeles Police Department officers were videotaped beating motorist Rodney King, and Fahey’s sentence was widely believed to have contributed to the riots that ensued when the LAPD officers were found not guilty. Fahey’s decision led to protests outside her home, and Harlins’ death is still mentioned as an example of injustice by Black Lives Matter activists.

At Napolitano’s suggestion, an hour was added to the forum, which will run from 6 p.m. to 9 p.m.