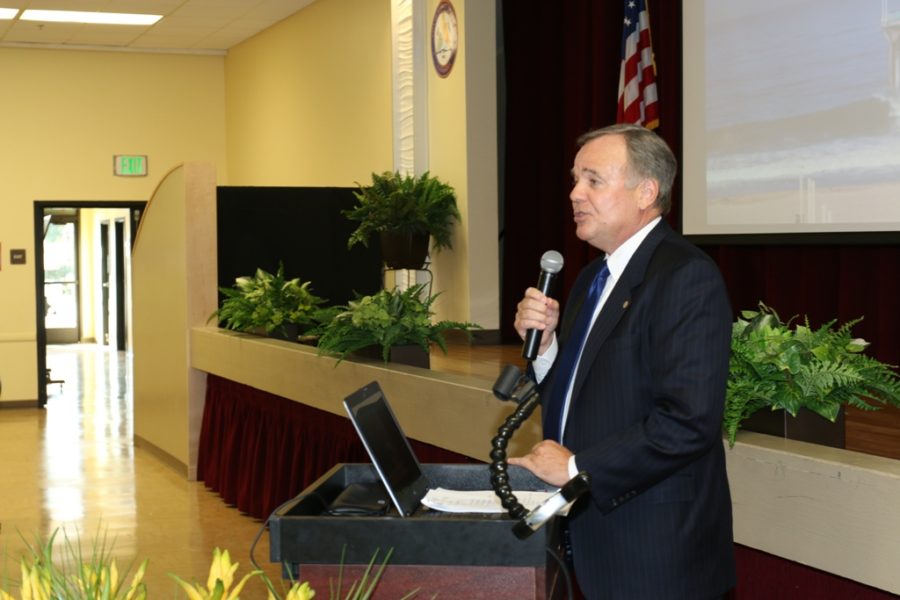 The twin, six-story Manhattan Beach Towers on Rosecrans Avenue sold for $96 million last August. The price set a record for a commercial property sold online, despite the buildings being only half leased.

The sixth floor of one of the towers was occupied by Digital Ventures, a newly formed, 70-employee subsidiary of the Boston Consulting Group. The technology and design consulting company is planning to expand to three more floors to accommodate an additional 230 employees employees.

Manhattan Beach Mayor Mark Burton explained the  company’s selection of Manhattan Beach for its international headquarters by saying, “Successful businesses recognize opportunity before everyone else.” Then he added, “All of Silicon Beach is looking for places and we should seize that opportunity.”

Burton’s observations came during his State of the City breakfast at the Manhattan Beach Joslyn Center last Wednesday, presented by the Chamber of Commerce.

The mayor proposed his city take advantage of the Silicon Beach opportunity by building more hotels.

“Manhattan’s hotel occupancy rate is 86 percent, among the highest in the nation,” he noted.

One hotel location he proposed is the city-owned property just east of the soon to be remodeled Manhattan Village. “The city would get the ground lease, a percent of revenue and the tenant occupancy tax,” he said.

Another potential hotel site, Burton said, is the Verandas Beach House on Rosecrans, two blocks from the ocean.

“We’re looking at a public/private partnership, similar to the downtown Metlox project, to stimulate the North End.” 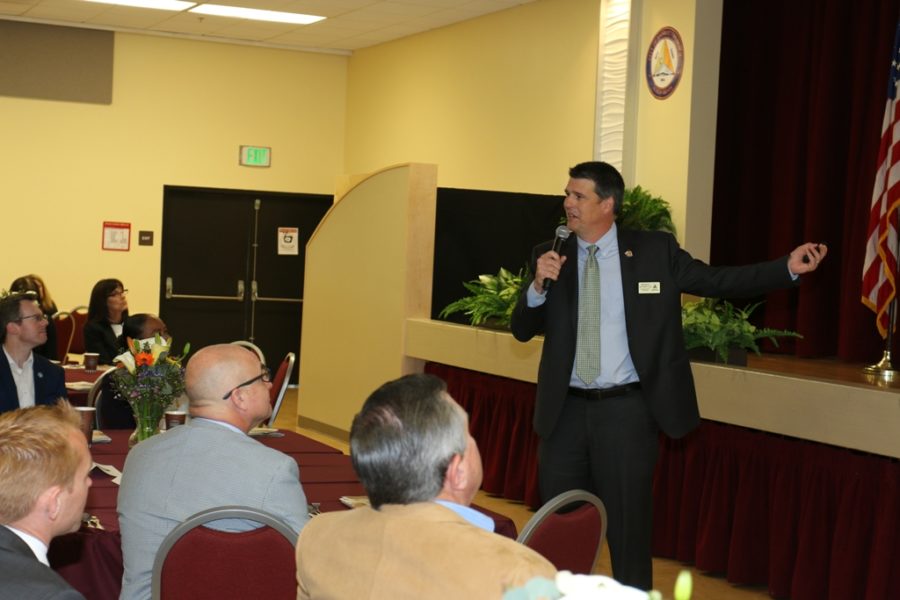 “The council has an obligation to examine development opportunities that will provide fiscal sustainability,” he said in arguing for the city entering into public/private developments.

He noted that the fire department on Manhattan Beach Boulevard, on the east side of town, was built in 1954 and that the city hopes to “scrap city hall and rebuild it with three to four levels of underground parking for downtown employees.”

Another project Burton championed at the breakfast was surveillance cameras similar to London’s “Ring of Steel,” which was installed during the 1970s to deter Irish Republic Army bombings.

Cameras that record license plates would be installed on streets leading in and out of the city. A registry of residential and commercial surveillance cameras would be created for police use.

“The message to criminals will be, ‘If you come to Manhattan Beach you’ll be on camera,’” said Burton, a retired Los Angeles assistant city attorney. 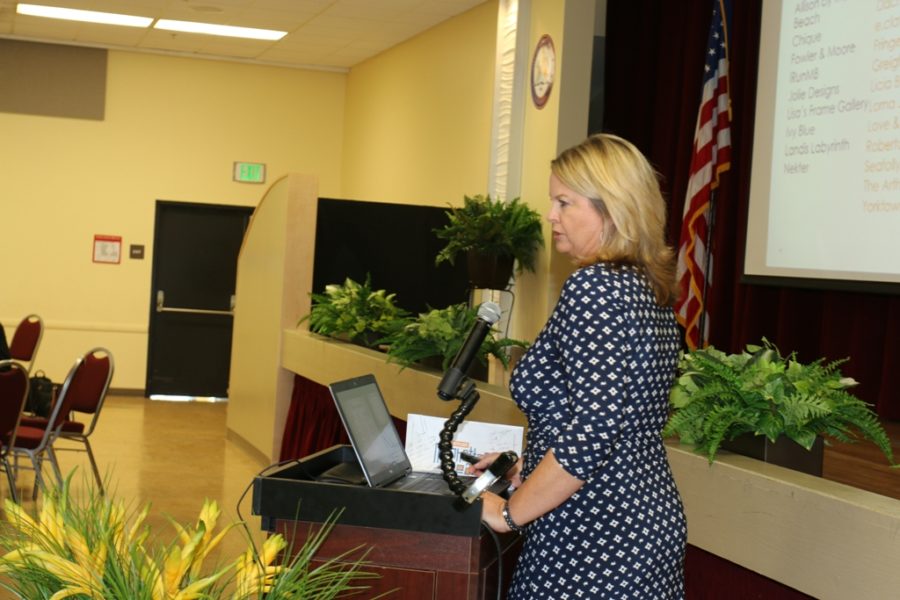 Downtown Business and Professional Association directory Kelly Stroman said a solution needs to be found for the parking shortage.

By June the city will have completed a specific plan for the downtown, Burton continued.

“Specific plans were popular on the East Coast during the 1940s and 1950s, which is why you see so many quaint towns back East. Carmel and Laguna were among the first California cities to develop specific plans. We are going to guarantee that Manhattan’s quaint downtown will be preserved,” he said. He added that Southern California Edison will be asked to pay for undergrounding utilities in the downtown.

In response to a question from the audience, Burton ruled out rent control as a tool for preventing independent, downtown retailers from being pushed out by chains.

“There’s no support for rent control. We believe in a free market. But the specific plan will make locally owned businesses viable,” he said.

Burton praised city manager Mark Danaj and the staff Danaj has assembled since being hired two years ago, for their “let’s get it done mentality.”

He also praised the city council for putting a stop to “delay and doodle” meetings that ran past midnight in favor of meetings that start promptly at 6 p.m. and end no later than at 10:30 p.m. 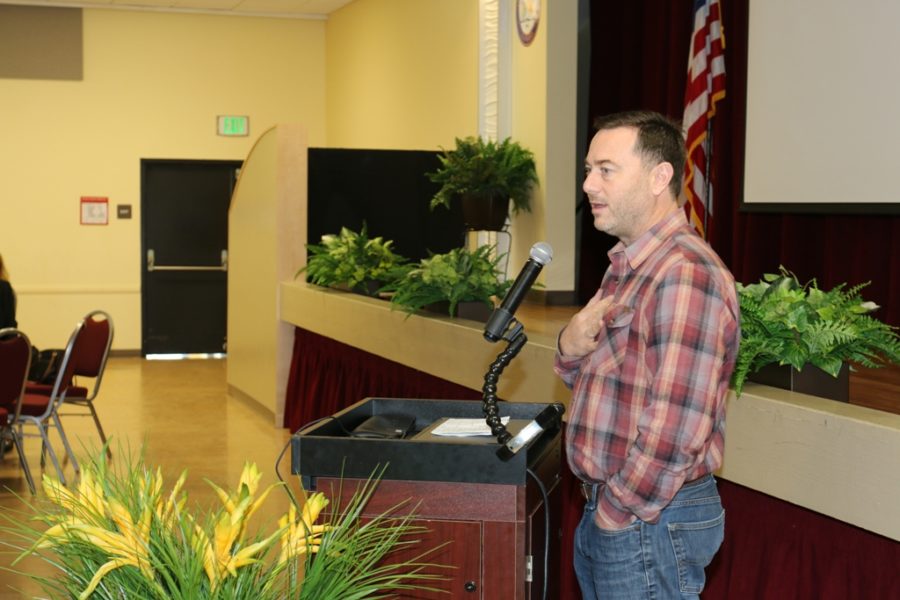 “The council will exercise leadership on business issues, but we need you to send emails and show up at council meetings,” he told the audience.

He asked residents to become more involved in fighting crime.

“We have 70 percent participation in the neighborhood watch program. We want it to be 100 percent. When residents see something out of the ordinary, we want them to call the police. Our department’s motto is ‘No call too small.’ Police recently responded to a complaint about a wind chime,” he said.

He then told of firefighters helping an elderly woman seated with a bag of groceries on a bench in the Veterans Parkway. “They stopped the fire engine to asked her if she was okay. She said she was just resting, so they gave her a ride home.You won’t find that happening in many communities.

Burton ended his comments by talking about a family he met two years ago, when he was elected to the council.

“The husband had been with the State Department and in finance in Japan for 10 years. The wife’s job required she travel the world. When they decided to relocate, they looked in the U.S. and in Europe before deciding Manhattan Beach was the best place to raise their six month old son.

“I asked the dad recently what he thought of Manhattan after living here for two years He said, ‘It’s better than I thought.’” ER