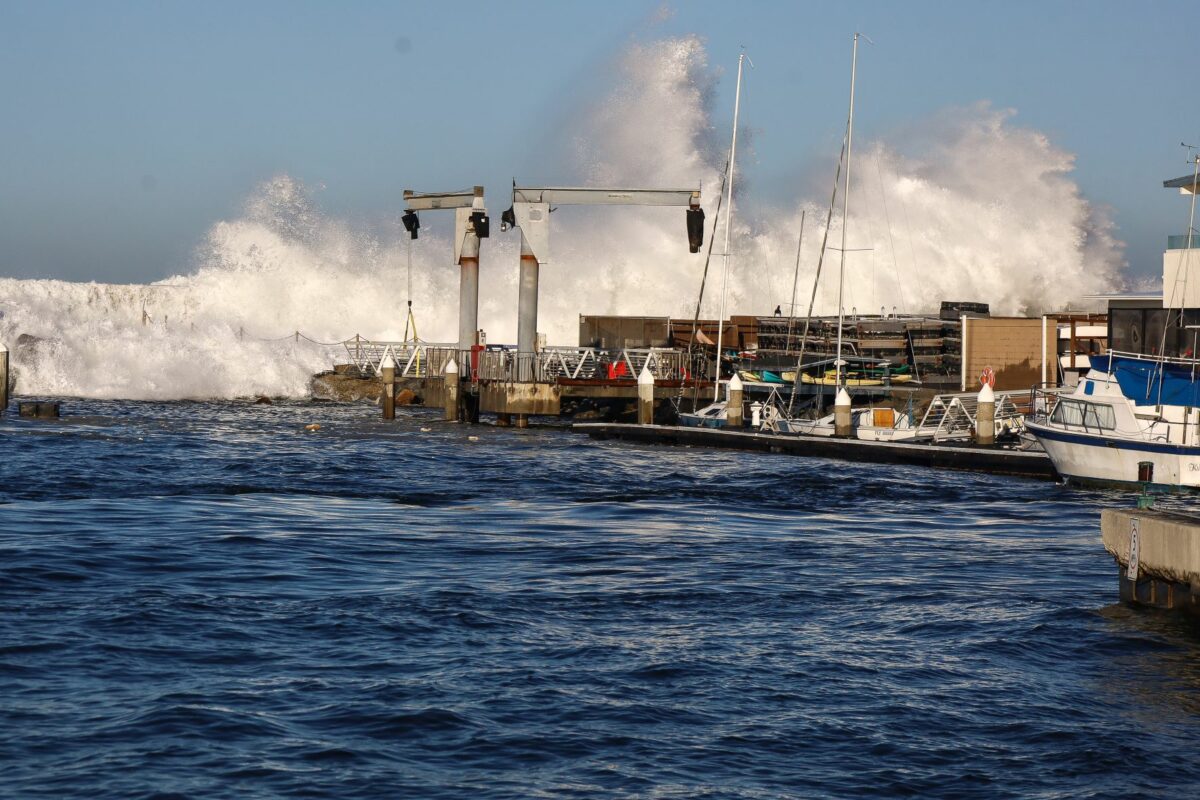 Damage from the January 6th Surf that breached the Redondo Beach Breakwall would hve been far worse had the swells coinsided with the King Tides over the weekend of Dec. 23, 24. Photo by Kevin Cody

The 20-foot swells during the first two weeks of January breached the King Harbor breakwall, and tore up the yacht club parking. At high tide, the Redondo Beach and Manhattan Beach bike paths were flooded. But the January damage was mild compared to what it might have been had the large swells hit the weekend of Dec. 23, 24. Or what it might be this coming weekend, January 21, 22, were the large swells to return.

Like the Dec. 23, 24 weekend, the coming weekend brings King Tides. King Tides coincide with a full, or new moon, when the gravitational pull on the oceans is strongest. The December 23, 24 high tide was 7 feet, a full foot higher than the Jan. 6 high tide, when the King Harbor breakwall was breached, and the yacht club parking lot torn up. This weekend the King Tide will again top 7 feet, though no damage is expected because the surf will be just one- to two-feet.

Understanding the impact of King Tides is important because they signal the impact of ordinary three- to six-foot high tides in coming years, when climate change raises the ocean’s level.

This weekend the Manhattan Beach Roundhouse Aquarium invites the public to participate in a study on the impact of Saturday’s and Sunday’s King Tides, and what they tell us about the future.

The study is part of the California King Tides Project, created in 2010 by federal, state and regional non profit organizations.

The adverse effects of today’s high tides will be significantly worsened by rising sea levels. Trash and pollutants washed into the ocean will further harm marine life. Saltwater flowing inland will damage freshwater plants, and animals. Higher seawater levels can also permeate into coastal groundwater supplies, increase erosion, lead to additional flooding, and damage coastal infrastructure and property.
Marine animals and plants depend on the tidal zones to survive. There are several species of plants that can only survive in a specific zoned niche within wetlands, beaches, and tidepools. With the rising water levels seen during King Tides, the plant and animal communities will get the signal to shift inland to higher areas in order to maintain the same zonation. When there is no room to move due to development or steep cliffs, coastal habitats will decrease, and animal and plant communities will be unable to adapt for survival.

King Tides are fleeting, but they can be amazing to witness. Understanding King Tides helps us to ensure our beautiful coastline communities are here to enjoy for many years to come.

Volunteers are asked to meet at the base of the Manhattan Beach pier at 8:30 a.m.