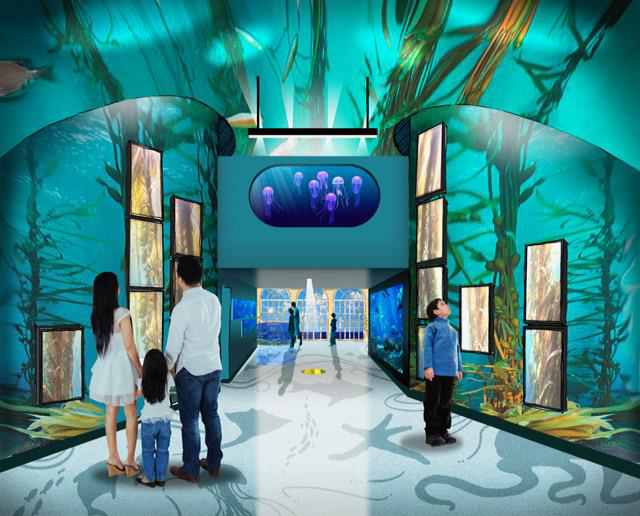 A rendering of the new Roundhouse Aquarium, scheduled to be completed by next summer. Rendering by Cambridge 7

A rendering of the new Roundhouse Aquarium, scheduled to be completed by next summer. Rendering by Cambridge 7

The Manhattan Beach City Council on Tuesday night approved a final design for a  new Roundhouse Aquarium and an initial design for the Scout House, two public-private partnerships that each will restore vitality to the city’s most historic remaining infrastructure.

Both are passion projects. The Harrison Greenberg Foundation Roundhouse Aquarium Beautification Project, which will modernize the iconic facility at the end city’s pier while staying true to its original 1917 design, emerged from tragedy. Greenberg was the 19-year-old son of Skechers president Michael Greenberg who passed away suddenly on a trip to Thailand on company business in 2015. The aquarium was one of Harrison Greenberg’s favorite places throughout his short life. As the voiceover to a video played at the outset of Tuesday night’s presentation said, “This is a story about a boy and an aquarium at the end of the pier, about growing up, about beginning and ending and beginning again.”

The city’s unofficial historian, Jan Dennis, appears in the video, tearing up as she describes what the Roundhouse means to her when she has been away from Manhattan Beach and returns. “When I see that pier, I am home,” Dennis said. “And I’ve been here 56 years —  not as long as some of our natives, but it’s home to me, and the pier is a symbol of it.”

Many of those who spoke Tuesday night, including Councilman Richard Montgomery when he made the motion to approve the final design, did so with watery eyes.

“We’d love to see this [new aquarium] for so many reasons,” Sievers said. “I think it would be a great asset to the city.”

Cambridge Seven architect Peter Sollogub, who has designed major aquariums throughout the country, gave a virtual tour of the redesigned 2,000 sq. ft. facility, which includes a new eastern-facing entrance where the snack shop now exists.  Once inside, aquarium visitors will find themselves in a widening walkway, with a rocky reef tank,  a sandy bottom tank and the ever-popular kids’ touch tank on the left and the shark tank on the right; the west-facing walls retain the Roundhouse’s distinct arched windows, and so the Pacific is always visible —  Sollogub described how the space opens up towards the ocean as a “celebration.” Above, an updated and enlarged mezzanine includes a goldfish tank, an exhibit space, a discovery corner “nook” for small children, and a view of the touch tank from above.

“I think when all is done here, it’s going to be an experience…It’s really going to be a Manhattan Beach story,” said Sollogub, who praised the Greenberg family and the city for bringing out the best design possible. “It’s really that combination of love and heart that has created this design and standard of excellence this project will exemplify.”

The only hesitation anyone expressed was the departure of the snack bar. But the most recent vendor, Two Guns Espresso, as well as former vendor Dana Ireland and restaurateur Mike Zislis, all suggested the roughly 165 sq. ft. space was a difficult business proposition and unnecessary for the pier given all the dining options nearby. Ireland, the only of the three present Tuesday, argued it made no sense, design-wise, to have a world-class aquarium with an entrance from the south.

“I think a good solution is just to roll up a nice food cart, shaped like a dolphin or something,” he said. “Something with food and drinks, and it could raise funds for the Roundhouse.”

Mayor David Lesser and Councilmember Steve Napolitano both said they had been reluctant to part with the cafe but were persuaded by the former vendors testimony and by the benefits of the new design itself.

“At this point I’m willing to let it go,” Napolitano said. “You can put a cart out there. We can look at that, as to amending city code [to allow it]….I am 1,000 percent behind this.”

Montgomery’s motion to approve the design passed 5-0. Pending Coastal Commission’s approval, expected in September, construction will occur from January to May and the new facility will open in June of next year. A temporary trailer will house a small version of the aquarium, and portions of the pier will be closed for two months during construction.

Michael Greenberg, who donated $1.25 million to start the project, said a total of $2.5 million of the overall $3.5 million has been raised to pay for the project.

“From the bottom of my heart, I want to thank everyone involved,” Greenberg said. “I really do.”

The Scout House is a somewhat less iconic city facility, but one that is equally treasured by several generations of Boy Scouts, Girl Scouts, and senior citizens. The facility, also known as the Manhattan Beach Senior & Scout Community Center, is tucked away amidst the trees behind the Joslyn Center on Valley Drive. It was built by the Boy Scouts and their supporters in 1952 and has barely changed since, except by way of slow deterioration.

A few years ago a non-profit, Friends of the Senior and Scout Community Center (FoS&SCC), formed in order to raise funds to rebuild the aged facility. On Tuesday night, they unveiled the initial design by local architect Louie Tomaro, and outlined where things stand with fundraising.

Bret Bernard, a board member for the nonprofit, noted how heavily used the facility is, given the 1,500 scouts and nearly 10,000 seniors (35 percent of the city’s population) live in Manhattan Beach.

“It’s a perfect partnership —  seniors by day, and scouts by night,” Bernard said.

He also noted the Scout House’s larger historical significance —  the year after it was built, the Scouts hosted the world’s first Pinewood Derby, a model car race which has since been adopted by scouts worldwide.

Tomaro unveiled his initial design, a two story, 7,000 sq. ft. building which features movable walls to maintain flexibility for large and small events, an outdoor amphitheater and BBQ area, and a second story nestled in the trees.

“The concept was really to make this feel like it’s a treehouse, almost,” Tomaro told the council.

Napolitano asked if it could be made to “look just like a cabin” and Tomaro said that was the idea, stressing that initial renderings focused on building massing rather than materials.

Beth Gessner, the vice chair of the Friends of the Scout House board, said the building was originally slated as 6,000 sq. ft. at $2.5 million but has been expanded to 7,000 sq. ft. and about $3.5 million. She said $1.3 million has thus far been raised, and the organization is recruiting volunteers to kick its capital campaign into high gear in September pending council’s approval. Part of the increased cost, she noted, was the addition of an office space for a full time city presence and outdoor restrooms, which will serve athletes from nearby Live Oak park. She asked the city for a $82,000 contribution.

Napolitano surprised her with his response.

The rest of the council, including former Girls Scouts Amy Howarth and Nancy Hersman and former scout leader Lesser, enthusiastically agreed. They added a stipulation that the building should be equipped with solar panels.

“Our community is really a community of people who want to contribute to solutions,” Howarth said. “ All these people are stepping up. It just fills me with pride and gratitude…We are all going to benefit from this. We will all be seniors some day.”

“Let’s all buy cookies,” she added. “Once a Girl Scout, always a Girl Scout. Let’s get her done.”

“Scout, senior —  I fulfill all of that,” Hersman said. “So I’m very excited about adding money to this.”

The initial design passed unanimously. “The big problem with this project is it’s going to make the Joslyn Center look even worse,” Napolitano joked,  triggering  a discussion about adding the facility to an upcoming capital improvement analysis.

Howarth, after both the Roundhouse and the Scout House were approved, could barely contain her giddiness.

“We have talked about two major projects, public and private [partnerships], but we are really moving forward and getting something done with support from our community,” she said. “It’s really an exciting night.”