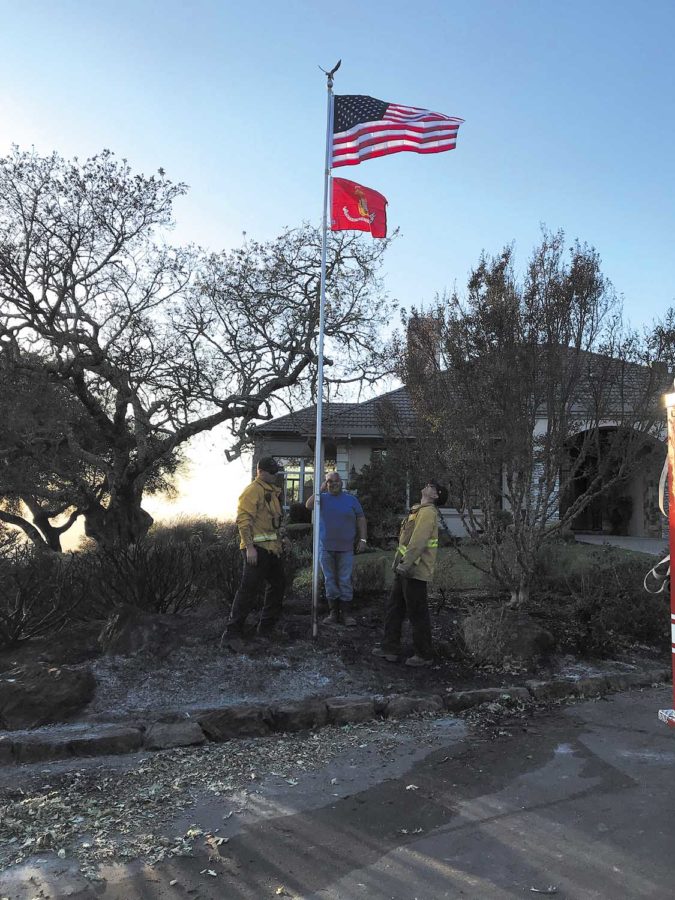 An engine company from the Manhattan Beach Fire Department was part of a South Bay strike team that helped fight the largest wildfire in California so far this year, the Kincade Fire. While they were helping to contain that fire, they also were able to provide assistance for an old Marine whose American flag was in tatters from the fiery debris wafting around his home.

The Kincade Fire started the night of Oct. 23 in Sonoma County, triggering a wave of evacuations. By Nov. 5, some 77,758 acres had burned and 374 structures were destroyed, according to the California Department of Forestry and Fire Protection.

An engine company led by MBFD Capt. Derek Edmonds that included firefighter/paramedics Chris Grafton and Craig Youngdale and engineer paramedic Mike Murrey spent a week fighting Kincade. They were patrolling the area near Shiloh, near the Sonoma Airport, when they were assigned to contain fires threatening a large house. They arrived at night to find the home’s pool house, where a family member who’d lost previously their own home to a fire was living, burnt almost to the ground. A Rincon Fire Department engine the night before had prevented the main house from burning. 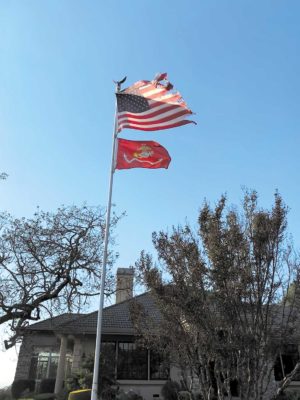 An American flag in tatters due to the Kincade Fire.

By the third day, the homeowner, a former Marine named Ed Nessinger, was able to return to his house.

“His American flag was hanging there in tatters from the winds and the firefront,” Edmonds said. “But he was proud that his Marine flag wasn’t beat up. It wasn’t torn or anything.”

The man had two new flags in the house and the firefighters offered to hang them for him. He said he’d be honored.

“It was very touching,” Edmonds said. “A lot of people had lost homes there. He was beyond appreciative. Being where he is, he knew that he was lucky his house was still standing. It took a lot of effort, and a little help from Mother Nature, obviously.”

As the firefighters raised the new flag, the man saluted.

“I’ve been on the job for 22 years with MBFD, 27 years total, and it was definitely a special moment,” Edmonds said. “A lot of times we don’t get to see the people whose homes we protect, much less help them put up the American flag.”