MEASURE A – Battle lines drawn over Measure A parcel tax 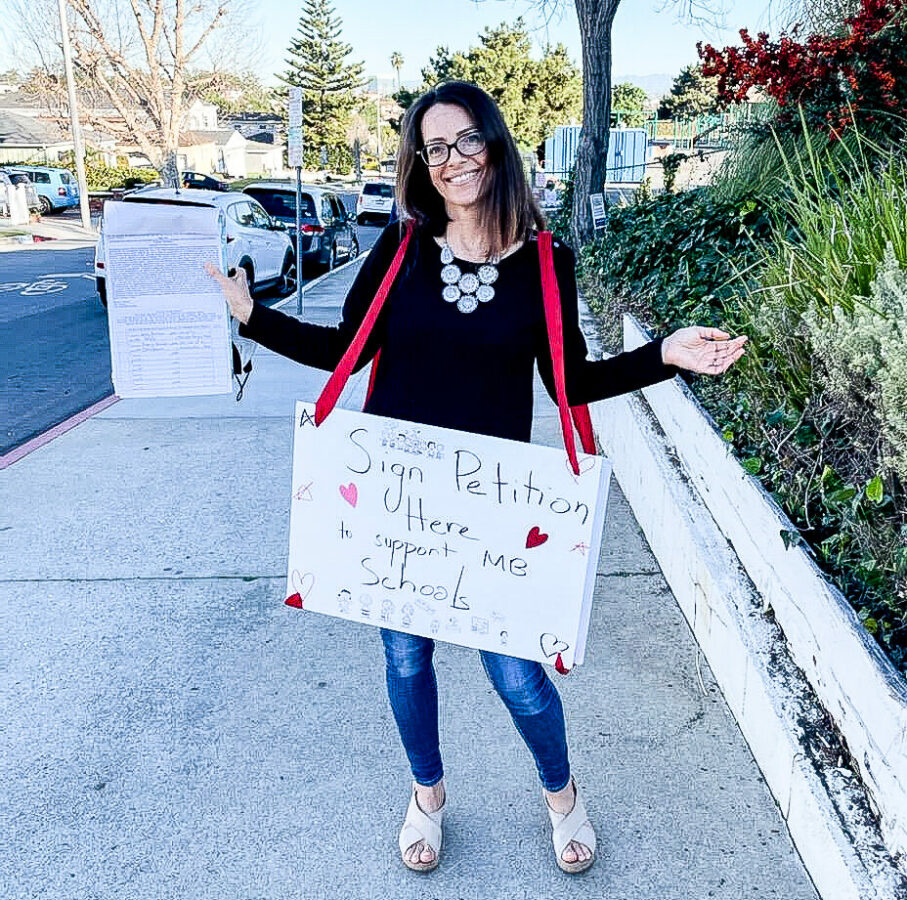 The item on the City Council agenda Tuesday night proposed a Memorandum of Understanding (M.O.U.) in which the City of Manhattan Beach would agree to collect the parcel taxes proposed by the citizens’ initiative, Measure A, and establish an oversight process for how those funds are to be spent.

The discussion that ensued, however, went far beyond the M.O.U. and into the pros and cons of Measure A itself. Dozens of residents weighed in, often passionately, and two council members, Joe Franklin and Suzanne Hadley, came out against the ballot initiative. Political season for the June 7 election, largely confined to social media, arrived within City Council chambers in the first fully live, in-person Council meeting since before the pandemic.

The Council did ultimately approve the M.O.U. in a 3-2 vote, with Franklin and Hadley opposing, which was a necessary item of business as Measure A arrives in mail ballots next week. The M.O.U. is unusual because the previous parcel tax, enacted in 2018, as well as previous bond measures supporting local schools, leaves oversight in the hands of the Manhattan Beach Unified School District. But Measure A is different because it is the first citizens’ initiative for a parcel tax, and under newly settled law this also means it only needs 50 percent plus one for approval instead of the 66 percent required in previous measures.

Michael Sinclair, who authored Measure A and is one of the leaders of the group of parents calling itself MB Parents for Schools, told the council that despite misinformation being used against Measure A the core issue is simple.

“Manhattan Beach is one of the lowest funded districts in the entire state,” Sinclair said. “Sacramento has critically underfunded our district for decades, and it has had a compounding effect on our local schools. Measure A is about local control —  taking back local control of our schools and keeping our tax dollars here in our local classrooms and out of the hands of Sacramento. Measure A is not affiliated with the school board, the school district, any community organization or any school program. We are independent citizens.”

Measure A would levy $1,095 on every parcel yearly for the next 12 years, raising an estimated $12 million annually for MBUSD. Sinclair identified two aspects of the parcel tax that he said have been frequently mischaracterized —  that seniors would have to apply annually for an exemption (they can file just once and remain exempt) and that with inflation the cost to residents could double over the life of the tax.

“As you know that too, is simply not true,” Sinclair said. “As the M.O.U. clearly confirms, any annual increases are capped at the lesser of CPI (Consumer Price Index) or 5 percent. With no annual increase to be levied in the first year of assessment, Measure A cannot double.”

City Finance Director Steve Charelian, who set the CPI cap at 5 percent, said that the overall number over 12 years is likely to be much lower.

“We looked at it historically and went back over 25 years of CPI, and it was roughly 2.4 percent,” Charelian said. “So the 5 percent, I think, has a cap in the sense of not to exceed 5 percent. Right now inflation is high, everybody’s talking about it, everything’s high. But if you look at it historically, CPI is a long term kind of calculation.”

Opponents questioned the price tag, the lower threshold for voter approval, and MBUSD school board’s ability to manage the funds.

Resident Heather Kim noted that residents are still paying for the Measure MB parcel tax approved in 2018, which levies a $225 per parcel annual tax.

“This parcel tax is occurring on top of another parcel tax…that’s already in place,” she said. “And yet here we are, again, with a brand new one that is actually four times the current tax…And it’s unfair. All Manhattan Beach owners will be forced to pay the same amount, regardless of their property value. In addition, because of the way that this was put together, only 50 percent of the voters plus one person need to come out and vote yes in order for this to pass. Fifty percent are going to speak for all 100 percent of the residents here in Manhattan Beach when normally this requires a two-thirds vote.”

Garrett Nose, a senior at Mira Costa, told the council that although he is a fiscal conservative (he said he supported Hadley’s husband, David, when he ran for assembly), one area he believed spending should be prioritized is education. Nose said he came from a family that had been poor immigrants and had risen through education, led by his grandfather, who was the first person of Japanese descent to graduate from Harvard Business School after WWII.

“In our family, we have a saying…that education elevates, and programs perpetuate,” he said.  “If [there is] one thing that you must consider and continue funding, it should be education. It should be our number one priority as a city, it should be our number one priority as a state. Furthermore, investing in education has further benefits down the line. The state of Massachusetts funds its education the most in the United States, but also has the fourth lowest crime rate in the United States. There are clear correlations between getting a good education and having a better future later on in life. I will continue fighting [with] the student body to ensure that the measure is passed because the same parents that worked to get us back in the classroom, which I applaud, are also now neglecting the potential issues that we may face in the classroom.”

Public testimony on the issue took the council meeting late into the night. Council discussion on the M.O.U. itself was brief. Councilperson Richard Montgomery, in making the motion to approve the agreement, said approving the M.O.U. did not signify the City was for or against Measure A.

“The reason why the city attorney and the school district are involved is because the citizens group cannot draft an M.O.U. for the city. Plain and simple, folks. It’s an easy answer,” he said. “We got to that 30 minutes ago. And the idea about what the costs are, it’s plain and simple. Again, Consumer Price Index, inflation or 5 percent, whichever is less. Again, it’s right out there…This is an M.O.U. Read it. Pass it. You don’t want to vote for it, don’t vote for it. If you do, vote yes. Three simple things.”

Franklin, after being asked by Mayor Hildy Stern to try to keep his comments to the M.O.U., instead delivered an emphatic, if somewhat circular, nine-minute speech about why he was against Measure A as well as the M.O.U. He recalled his own family’s history in education as well as his personal involvement in local schools. He said he’d supported every bond measure for the last 25 years as well as the first parcel tax and so it pained him to oppose this one. He said that due to the high price tag, senior exemptions will likely be higher than anticipated and lead to a $4 million annual shortfall, requiring another parcel tax. But he also argued that due to inflation this tax could end up costing $200 million, well beyond the $144 million in estimated revenues. He also argued that the school district’s 11 percent drop in enrollment over the past two years deserved an investigation rather than “an injection of unprecedented funding in a rushed manner” via a parcel tax.

“For these reasons, I oppose Measure A and the city’s role in the execution and administration of this Memorandum of Understanding with the Manhattan Beach Unified School District,” Franklin said. “This Measure A proposal is opportunistic and not fair to our residents.”

Hadley said she was not taking a position on Measure A but was against the M.O.U., which is a necessary part of Measure A. She noted the M.O.U. is only 12 pages, compared to the 400 page city budget document, and described the initiative effort as rushed.

“It’s $144 million out of all the residents, and going to a school where enrollment has dropped 12 percent In the last ten years,” Hadley said. “That’s my problem. That’s why I was elected. I’m a watchdog for the taxpayers. They can vote, sure, but I’m voting on the M.O.U. My conscience is clear. In March, I said this is rushed, you guys. Put it on the November ballot…We want voter turnout. So put it on the November ballot and be gutsy, get the resident input and take your time with this stuff. These are unforced errors by the citizens committee.”

Stern called for a vote.