Mesopotamian art: sorta, kinda, not on display at the Getty Villa

Once upon a time and far away

“Mesopotamia: Civilization,” closed before it opened at the Getty Villa

I want you to read this, and weep. Among the hundreds of art events or exhibitions that have not happened this year and may not happen at all, “Mesopotamia: Civilization Begins” is one of the most prominent. It was slated to run at the Getty Villa from March 18 to July 27. Presumably a handful of people saw it after the installation. Presumably also, you weren’t one of them. 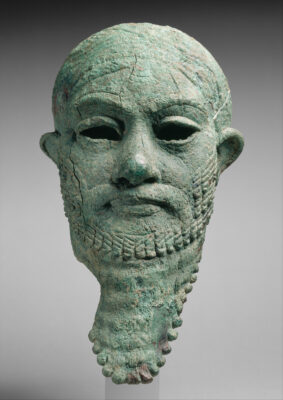 Head of a Man, Possibly a Ruler Akkadian or Neo-Sumerian period, 2300–2000 B.C. Bronze; The Metropolitan Museum of Art

Neither was I, but I did read the catalogue for the show, which is available from Getty Publications. So what did we miss? I’ll quote: “The most important display of Mesopotamian art ever seen on the West Coast of the United States.” To put it another way, art and artifacts spanning three millennia, roughly 3300 BC to 331 BC. The majority of the 130-plus items were loaned from the Department of Near Eastern Antiquities at the Musée du Louvre in Paris. The show was curated by Ariane Thomas, of the Louvre, and Getty director Timothy Potts, both of whom also edited the catalogue which features essays by various scholars, all of them quite readable.

Mesopotamia, the word itself, means “between two rivers” (the Tigris and the Euphrates), that area commonly known as the cradle of civilization, which was rocked by the United States in 2003, thus opening the door for regional destabilization and eventually, too, the wanton destruction of priceless antiquities by religious fundamentalists.

For those who are geographically challenged: “Mesopotamia, in the broad sense of the term, is at the heart of the Middle East,” writes Cécile Michel, “a vast region stretching from the Persian Gulf to the Black Sea and the Mediterranean.”

Think about all that’s happened in just this past year. Now consider how big of a fish bowl 3,000 years is. And so we have not just the Sumerians, but the Akkadians, the Babylonians, and the Assyrians. Later these were integrated into empires of the Achaemenid Persian, Seleucid Greek, and Arsacid Parthian dynasties. The Persian conquest happened in 539 BC, but the real milestone here is the conquest of this region in 331 BC by Alexander the Great. 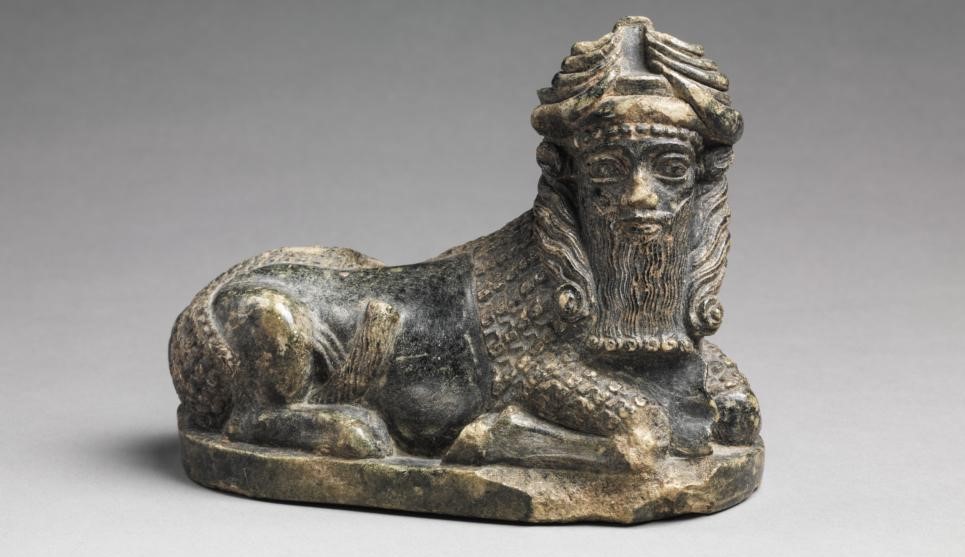 Three thousand years is also a lot of time for numerous cities to rise and fall, in some ways beginning with Uruk, because for the Sumerians that was “the city,” but also the more legendary cities of Babylon and Nineveh. And so we’ll ask, where are the remnants of these and other cities now, such as Ur, Larsa, Lagash, and Girsu in the south, or Nagar, Urkesh, and Ebla in the north? 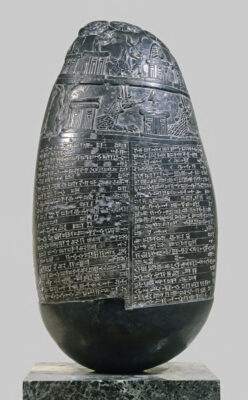 Pedro Azara explains: “While gleaming stone and marble suggest eternity, matte clay, in contrast, reminds us that time passes and destroys. But stone was lacking in Babylonia, in the center and south of Mesopotamia. Only clay was present in abundance.” Long answer short: clay melts. That’s why we can’t confirm the actual height and length of the outer walls of Babylon, especially when Herodotus says it was 85 kilometers long and 100 meters high. These and other exaggerations claimed that the top of the circular rampart was wide enough to accommodate a four-horse chariot. Ctesias and Diodorus went further: two chariots could pass one another in this almost highway in the sky. It makes you wonder about the Tower of Babel and the Hanging Gardens of Babylon.

Hollywood, going back to at least 1916 and D.W. Griffith’s “Intolerance,” has teased our imagination with stories set in pre-Biblical times. Because she just recently passed away, I’ll mention Rhonda Fleming who co-starred (with Ricardo Monteban) in the florid and lush “Queen of Babylon” in 1954.

And, of course, cities built by one empire are often demolished by those who forcefully conquer them. Ironically, what usually remains are the smaller objects; but even these, after being recovered and carefully preserved, are not guaranteed to remain safe. The National Museum of Iraq in Baghdad was looted in April 2003, followed by the looting of the Mosul Museum in December 2014. Meanwhile, historic sites in Iraq and Syria were systematically destroyed by Islamic State.

We pretty much assume that people and civilizations in the remote past were more primitive and barbaric than in the present day. To some extent yes, to some extent no (think of our unruly mobs vandalizing and toppling statues they’ve decided they don’t like). Zainab Bahrani points out that the Sumerians “practiced what was called in Latin jus ad bellum, or just war.” And he goes on to say, “Already in the middle third millennium the Sumerians practiced diplomacy. Before war was declared, envoys were sent to try to find a diplomatic solution to border conflicts. It was only when these failed that a messenger would be sent with a declaration of war, in advance of the actual attack.” Furthermore, “Battles were thus governed by laws of war.” 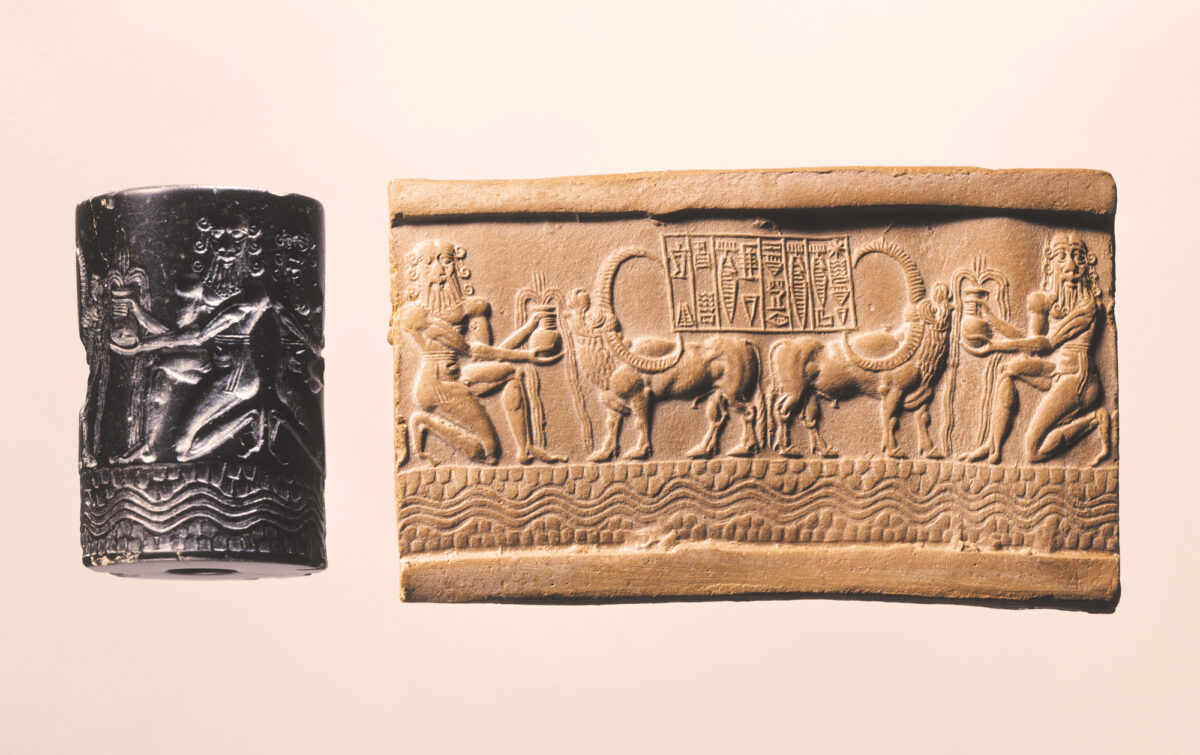 As for religion, when there is so much intolerance today, Benjamin R. Foster notes that, in Mesopotamia, “hundreds, even thousands, of gods and goddesses were known by name… Polytheism allowed both exclusivity and acceptance of diversity, so persecution, wars of religion, and zeal to convert people to another faith were unknown.” Many Biblical fables (Noah and the flood, for instance) and those of other lands, have their origins in Mesopotamian myths that managed to filter down through the centuries. Ariane Thomas writes that “The account of Etana ascending to heaven on the back of an eagle… may have inspired the Greek legends of Ganymede and Icarus.” 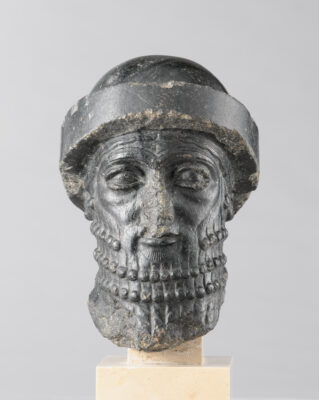 The gift of time

Most of us have heard of cuneiform writing, from the Latin “cunei” or “wedges,” and it emerged around 3200 BC or even as early as 3400 BC. It was likely invented by the Sumerians. Although the Sumerian kingdom fell around 2000 BC, with Sumerian as a living language beginning to disappear, the written language (considered a language of the erudite, as was later the case with Latin and then French) managed to hold on until the first century AD.

With written language comes literature, and perhaps the best known work from that long ago and far away land may be “The Epic of Gilgamesh.” And while Lady Murasaki’s “The Tale of Genji” is often mentioned as the world’s first novel, Princess Enheduanna—daughter of King Sargon of Akkad—composed perhaps 40 hymns to the gods and thus, writes Ariane Thomas, is “considered the first nameable author in history.” And to think, that was close to 4,000 years ago.

Although few people these days bother to read about Gilgamesh, with even fewer taking note of Princess Enheduanna, there is something from Mesopotamia that has been passed down to us and that we make use of every single day. By observing the movement of the celestial bodies, Ariane Thomas says, “Mesopotamian scholars could predict certain events, such as eclipses. They have also handed down to us their division of time into twelve months, following the lunar cycles, and the divisions of the week into seven days, and of hours into sixty minutes of sixty seconds.”

Mesopotamia: Civilization Begins would surely have been one of the highlights of this past summer and a nice complement to a previous exhibition, “Beyond the Nile” (as well as the book “Uruk: First City of the Ancient World”). For Getty updates, because eventually the doors will open, and also for information on purchasing the “Mesopotamia” catalogue and other Getty publications, go to getty.edu. ER