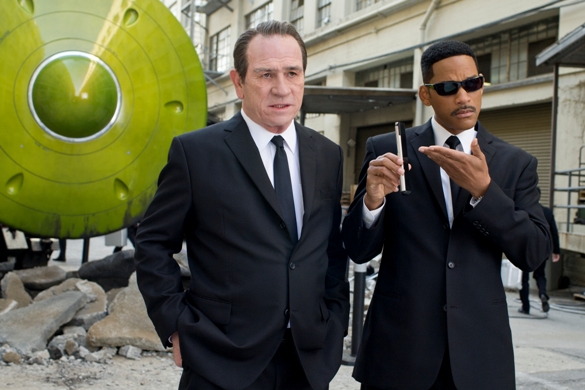 Expectations were not riding high as I entered the theater, having had to wait in a long line to check in and once again frisked and stripped of my cell phone (despite the fact that the film was in 3D – are there 3D cell phones out there?). Any residual good will quickly evaporated and I took my 3D glasses and looked for an open seat, of which there were many. Note to studio publicists, when you make a screening difficult to get into, many will choose not to go, replacing positive buzz with negative. In any case, sit down I did and waited for what I assumed was going to be a bug and monster fest – after all, this was part 3 of a franchise that ran out of steam in part 2. Well I was wrong and I’ll be the first to admit it.

“MIB3” is a rocketing, rollicking, visually over-stimulating fun fest from almost the beginning. Agents J (Will Smith) and K (Tommy Lee Jones) are back with a vengeance with those tongues firmly planted in their cheeks as they try to save the world, once again.

Boris the animal, the last remaining alien warrior of a species dedicated to universe domination, captured and maimed in 1969 by Agent K and an occupant of a high security lunar prison created especially for him, has escaped and is bent on revenge. Returning to 1969 via a time travel medallion, he is determined to kill Agent K and complete the destruction of Earth that he began before he was captured. Apparently successful in his mission, Agent J wakes up one morning to a new reality. Agent K is nowhere to be found, he has a new partner, the sky is crawling with jellyfish-like weapons taking over the atmosphere and Agent O (Emma Thompson) is concerned about J’s bizarre behavior. When J makes an inquiry about K’s whereabouts, his boss, Agent O (Emma Thompson) is thrown for a major loop – Agent K was killed in 1969 and Earth is about to be overtaken by the alien race led by Boris the Animal.

More concerned about the fate of his partner, Agent J knows he must travel back in time and reverse the recently reversed events. He must find Agent K and help him kill, not capture, Boris and restore Agent J’s orderly existence. Using a device similar to the one employed by Boris, J successfully travels back to meet Agent K at an earlier age (played wryly and delightfully by Josh Brolin) convincing him of the imminent danger to a world that now contains two Boris’s, the 1969 Boris and the time-travelling 2012 Boris, and no protective shield.

Will Smith is Will Smith and Tommy Lee Jones, older than I remembered, is even more taciturn and inscrutable. It is, however, the other characters that make this film come alive, led by Josh Brolin doing his wry 1969 take on both Tommy Lee Jones and an agent unmoved by the swinging 60s. Emma Thompson is at her most delightful underplaying a boss with smoldering sexuality that is referenced perfectly by Alice Eve, her younger self. Jemaine Clement, the hilarious deadpan actor from the HBO cult series “Flight of the Conchords” is unrecognizable as the terrifyingly vicious Boris. And Michael Stuhlbarg as Griffin, an ever optimistic Cassandra-like predictor of woe, is especially enjoyable. Even the excellent supporting actors in very small roles, too numerous to mention, show the kind of attention to detail that was paid.

Although the creatures are well done, as one has come to expect, it is 1969 that reigns supreme. Totally evocative, right down to Andy Warhol’s Factory, production designer Bo Welch has captured both the look and the feel of an era that is as much a character in the story as the creatures, aided generously by the mix of songs from the late 60s that transported those of us old enough to remember back to that earlier time. Also of particular note are, of course, the alien makeup by Rick Baker, the costume design (especially for the ‘60s) of Mary Vogt, as well as the cinematography by Bill Pope and all the visual effects.

Barry Sonnenfeld, the director, has proven, once again, that his eye, trained as a cinematographer, is great and his sense of humor greater, a humor incredibly enhanced by the not so slight script talents of Etan Cohen.

If there is a quibble, and there’s always a quibble, it is the use of 3D, seemingly a no-brainer in a film loaded with creatures. Sony is presently in a battle with theater owners over who will pay for the 3D glasses (previously supplied and paid for by the distributor). If I were them, I’d either drop the battle or produce films that have to be seen in 3D rather than films that will be just fine without, and as unlikely as that may seem, “MIB3” is not worth the 3D premium price. The story carries the day, not the special effects.

Although a tad violent for the younger than 13’s (although most current video games are more graphic than this film), it will be a lot of fun for most of the family, that is if the teens would allow their parents to appear in public with them. Go! Have fun. I certainly did. Rated PG-13 for science fiction violence and some suggestive content (although I’m at a loss as to what that could have been other than some deep cleavage).

Opening Wide on May 25. Neely also writes a blog about writers in television and film at www.nomeanerplace.com. ER