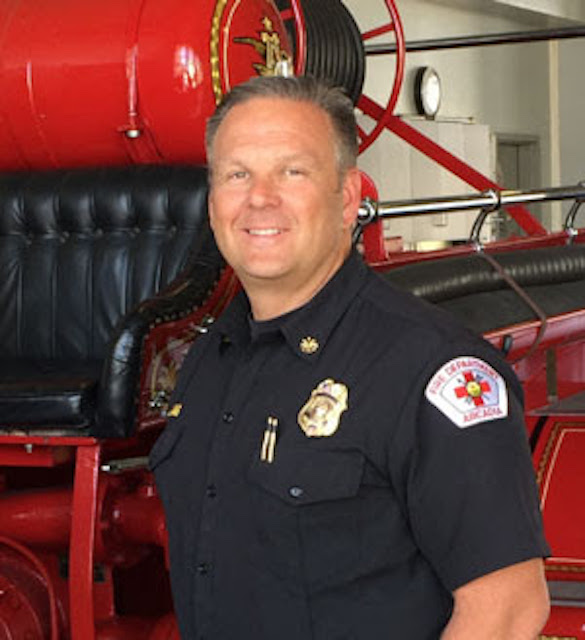 The City of Manhattan Beach Thursday morning announced the appointment of Michael Lang as its new fire chief.

“I am humbled and honored to be trusted with the responsibility of leading the Manhattan Beach Fire Department,” said Chief Lang. “I am grateful for the support of the City Manager and City Council and their confidence in my ability to maintain the highest standards of excellence and professionalism that the Manhattan Beach Fire Department exemplifies.”

Fire Chief Lang served the City of Arcadia for 21 years, moving his way up through the ranks from a Firefighter/Paramedic, Fire Captain, Battalion Chief and Deputy Fire Chief before his appointment to Fire Chief in 2016. In his time at the City of Arcadia, Chief Lang led a team of 60 personnel overseeing all fire operations including administration, training, fire prevention, emergency response and fire suppression.

Previously, Lang served the San Bernardino County Fire Department for four years. He has a Bachelor’s of Science degree in Occupational Studies from the California State University, Long Beach and a certificate in Executive Leadership from the University of Southern California. Over the course of his career, Lang has focused on demonstrating the value of a community-centered, metric-driven organization while fostering a healthy and productive labor-management relationship.

“Chief Lang has had an exemplary fire service career with a demonstrated ability to lead a full-service Fire Department. I look forward to working with him to build upon our outstanding fire services,” said City Manager Bruce Moe.

Prior to the appointment of Chief Lang, Wolfgang Knabe has served as the City’s Interim Fire Chief for the past ten months.

“I would like to thank Interim Chief Knabe for leading the department during the COVID-19 pandemic and his efforts to promote positive community and labor-management relations,” Moe said.

Knabe has accepted an appointment to serve as interim chief for the Santa Monica Fire Department. At Tuesday night’s City Council meeting, Mayor Suzanne Hadley singled out Knabe for praise, both noting his background as a Marine and the aplomb with which he served during an extremely challenging year.

“Your entire time with the city of Manhattan Beach has been during the pandemic, which we wouldn’t know that, because you hit the ground running. You’ve been amazing,” Hadley said. “I’m really going to miss you. You’re going to leave very big fire boots to fill for the next chief. I hope he can jump right in them.”

Rudy Meija, the president of the Manhattan Beach Firefighters Association, both praised the outgoing chief and welcomed the incoming chief.

“Our firefighters are thankful to Chief Knabe for providing leadership in stabilizing our department and we look forward to working with Chief Lang when he arrives on June 21,” Meija said.