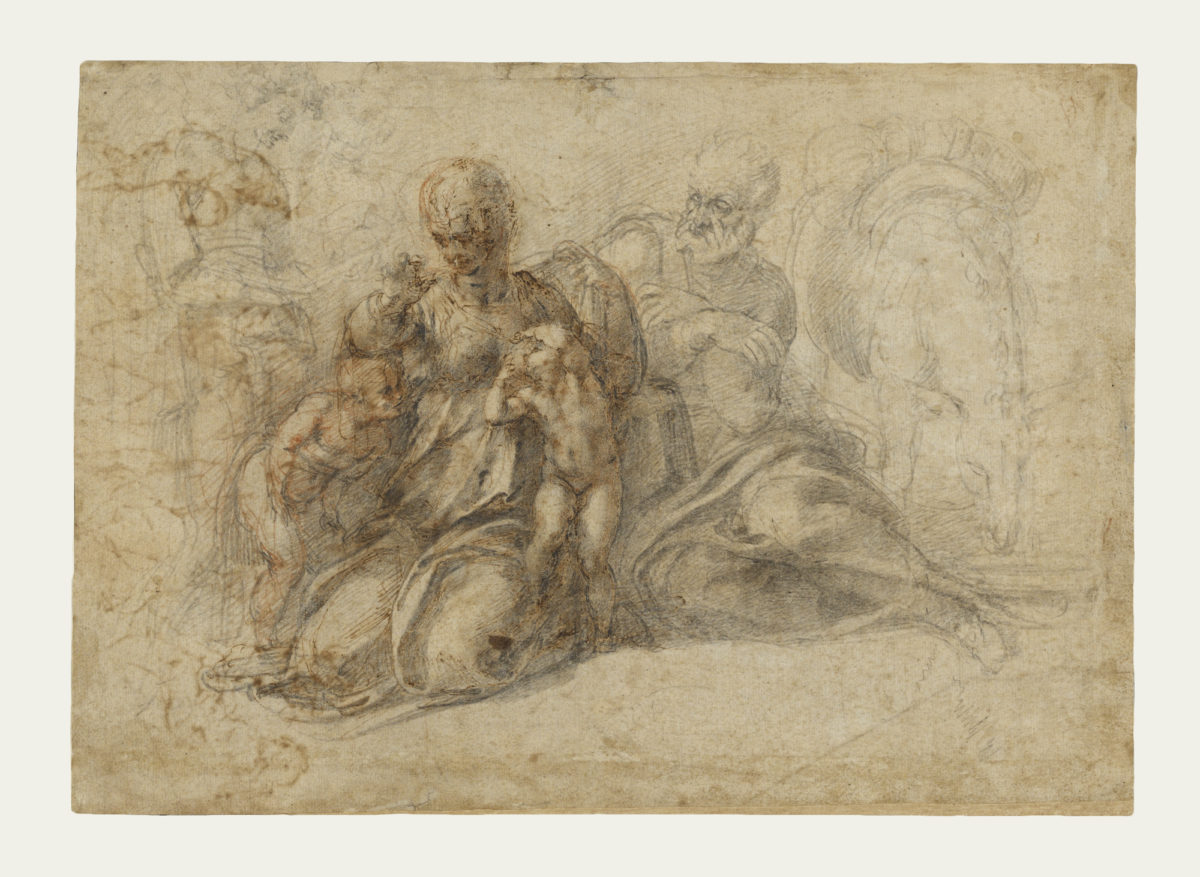 Michelangelo Buonarroti, “The Holy Family with the Infant Saint John the Baptist,” about 1530; black and red chalk with pen and brown ink over stylus. The J. Paul Getty Museum, Los Angeles

The wellsprings of creation

“Michelangelo: Mind of a Master” 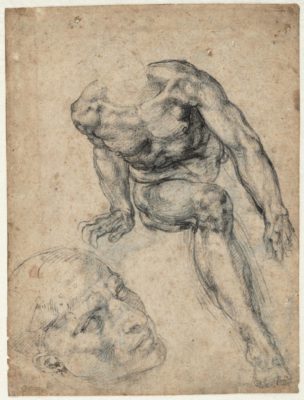 A few years ago, in his global survey of art from its earliest moments to the present, Julian Bell stated, referring, of course, to Michelangelo: “Never before or since has so much in art revolved around a single personality.” On the face of it, 28 sketches, many of them hastily drawn, may not seem to be a convincing argument for proclaiming someone’s influence and genius, but in “Michelangelo: Mind of a Master,” the presentation of these works should dazzle even the most skeptical observer.

Before I’d even set foot in the gallery, John Walsh, the Director Emeritus of the J. Paul Getty Museum, confided that he thought it one of the best (maybe the best) installations he’d ever seen at the Getty Center. I’d already read the catalog for the show and, frankly, expected something rather dry. What I quickly realized afterwards is that the book is better suited for those with a specialized interest in Michelangelo but that the exhibition, on the other hand, is for everybody. Paradoxically, the one note that I wrote while lost in the rooms with their subdued lighting, had to do with wondering if we (the common folk, so to speak) were even worthy of being allowed into this “shrine” devoted to an artistic genius.

A strange thing to write, but that’s how I felt. 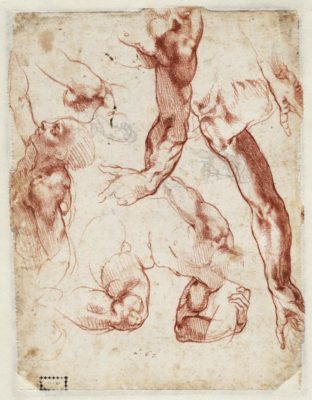 The 28 preparatory drawings in this show, some of them two-sided and thus exhibited on free-standing pedestals, were acquired by the Trustees of the Teylers Museum in Haarlem, the Netherlands, in 1790, having been purchased from the Roman nobleman Livio II Odescalchi. They’d previously been held by Queen Christina of Sweden (1626-1689), which means that there is a full century in which their provenance remains unclear. In the catalog, Carel van Tuyll van Serooskerken takes us on a lengthy and winding journey through the ages. After all, it must be remembered that, when you put your nose to these images, they were created nearly 500 years ago. And in that regard let me point out that there’s no substitute for seeing them in person, because it’s not just the texture of the paper, but some kind of invisible and thus indescribable “aura” of the ages that hovers about and emanates from them.

These 28 works comprise the entire collection of the Teylers’ Michelangelos, and it is the first time that they have, as a group, come to the United States, first to the Cleveland Museum of Art, which organized the show with the Getty, and now to Los Angeles (both of these latter institutions also contributed their own Michelangelo sketches to the show). 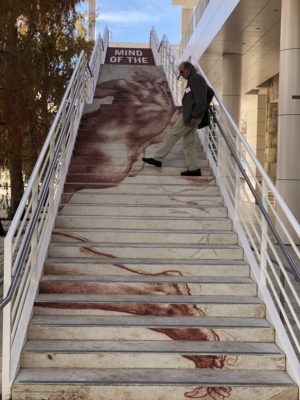 Altogether, approximately 600 drawings are now attributed to Michelangelo, but in his lifetime he completed thousands if not tens of thousands. Why are there so few now? Should we blame the silverfish of centuries past? No. Michelangelo himself destroyed most of his drawings for two reasons: one, to convey the impression that the ideas for his masterpieces sprang, Athena-like, fully formed from his head, all the details already worked out, and, two: he didn’t want other artists to get at them and to steal his ideas. Senior curator of drawings Julian Brooks, who co-curated the exhibition at the Getty with assistant curator of drawings Edina Adam, reminds us that “Michelangelo’s fame led to forgeries being made of his work even in his lifetime.”

Most of us are familiar with Michelangelo’s marble statue of David, his Pietà, his Last Judgment on the altar wall of the Sistine Chapel as well as its ceiling frescoes, but not with the contemplation that preceded them. In a nutshell, then, as Emily J. Peters writes, “Michelangelo’s drawings offer deep insight into his creative process, punctuating every phase of his career spanning the High Renaissance, from his youth in Florence to his later years in Rome … Drawing was the primary tool by which he planned for his many public and private commissions.” Peters, who co-edited the catalog with Julian Brooks, also adds that these sketches prove that “the act of creation was, for Michelangelo, wrought from his prolonged and sustained labor and the processes of repetition, translation, and variation.” 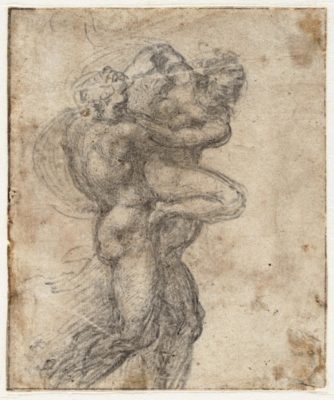 Although Michelangelo trained in the workshop of Domenico Ghirlandaio and presumably was astonished by the large sculpture of “Laocoön and His Sons,” unearthed in 1506, it was his own ideas that preoccupied him. That great biographer of fellow artists, Giorgio Vasari, quoted Michelangelo as saying: “No one who follows others can ever get in front of them, and those who can’t do good work on their own account can hardly make good use of what others have done.”

And what was it that preoccupied him most of all? I think it was the human body in motion and the musculature that animated it. As we see with Rubens, born a century after Michelangelo, that human dynamism, often heightened through struggle and pain, was a ceaseless, compelling interest, and it largely inhabits these drawings on view. Michelangelo isn’t sketching sunsets or horses in the meadow; he’s focused on parts of the body and how they appear turned this way and that and how they relate to other parts of the human figure. Not one-hundred percent exclusively, but pretty close.

In “The Last Judgment,” Julian Bell writes, “cloud-banks of pale, naked humanity rise, hover or fall around the damning gesture of a wrathful Christ. Michelangelo’s stock-in-trade, the muscular body, seems not so much an expression of the spirit as an agonizing trap for it, with remorse and disgust convulsing the massed figures.” 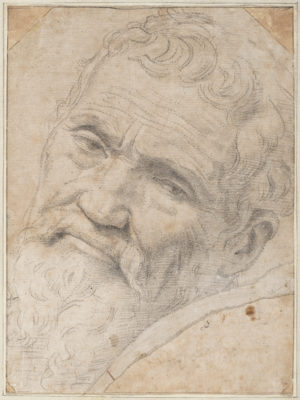 Michelangelo very likely made hundreds of sketches for this great work, but so few of them remain. Those here are scrutinized in detail in an effort to get us as close as possible to the source of their creativity. It’s the same, also, with the figure of “Day” that adorns, with “Night,” the tomb of Giuliano de’ Medici. And, with what has to be unprecedented, we can admire these latter drawings while standing near a lifesize photographic reproduction of the tomb itself.

For all that, one of the most arresting images in the entire exhibition is not (shall I repeat this?), is not by Michelangelo, but instead by Daniele da Volterra. It is, however, an accomplished portrait of the master at about the age of 75 (Michelangelo, 1475-1564, would live for another decade). The work is displayed alone at the end of a corridor, symbolically eyeing us as we approach. Perhaps in the busiest hours at the museum there will be a line forming in front of it, as there is for Hollywood screen legends, for who wouldn’t want an “audience” with one of the most astonishing artists who ever graced this planet?

The exhibition is accompanied by related events, mostly informal but informative talks by the curators, for those who will understandably want to know more about Michelangelo and the Italian High Renaissance in which he lived, an era that also gave the world the Divine Raphael and Leonardo da Vinci. When we step into the galleries the intervening five centuries simply disappear, and believe me, for an hour or two you won’t miss them in the least.