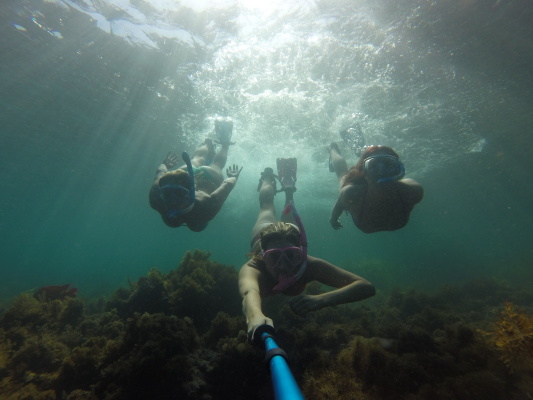 all photos courtesy of Body Glove

Catalina, a backyard destination for millions of Southern Californians, is just 86 miles away from my home in San Diego, and really a just a hop, skip and a jump from the Los Angeles area. For many, Catalina is a sanctuary for those looking to set their watch to island time…

It was a Tuesday afternoon when I got the call. A call that I felt really changed the direction of my life. Body Glove decided to sponsor my trip to Malaysia where I would be competing in the International Scuba Pageant representing the United States. They also decided to try something new, to sponsor me as an athlete. Out of no where, I suddenly had a sponsor for one of my favorite recreational sports. I had someone willing to help me scuba dive as much as possible. They wanted me to come in, sign a contract, and get to Catalina ASAP for a photo-shoot. “WHAT?!!” I was blown away. I was speechless, but my bags were half packed before we hung up the phone. 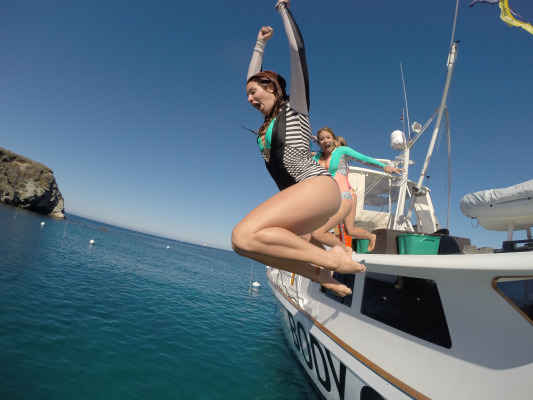 After organizing things between my work as a jetpack instructor and TV reporter, we decided a quick Tuesday/Wednesday trip would work best for everyone. Flash-forward to the following Monday. I woke-up after a 20 hour shift of reporting and jetpacking to a panic in my head of “get on the road already.” I didn’t get much sleep between my excitement and my anxiety but time really does fly when you’re having fun. After a day at the Dive N’ Surf/Body Glove offices, I passed out on their company boat, “The Disappearance,” and woke up headed west towards Catalina Island. 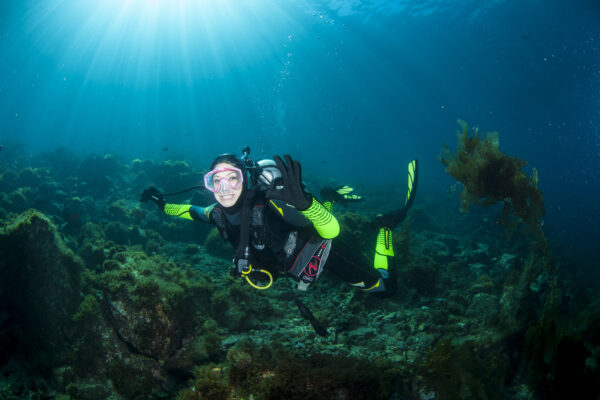 Tabitha with a smile ear-to-ear. 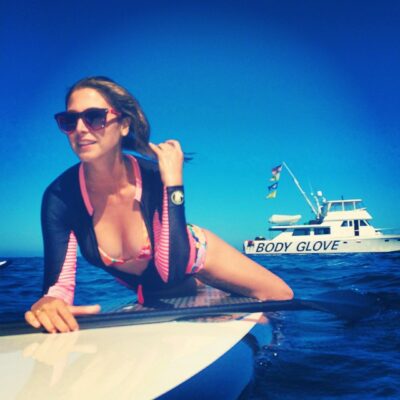 Tabitha mastering the Go-Pro with “the Disappearance” in the background.

Once we arrived in Catalina we got straight to “work”. When I say we, I mean myself and two crazy awesome girls: Tessa and Mackenzie. The three of us would become inseparable. Tessa works as a dive instructor for Dive N’ Surf, Mackenzie is an account manager for a new app called Trace. When you combine the three of us with our wonderful photographers Greg and Scott—— we were quite the crew. We definitely had too much fun while at “work.” 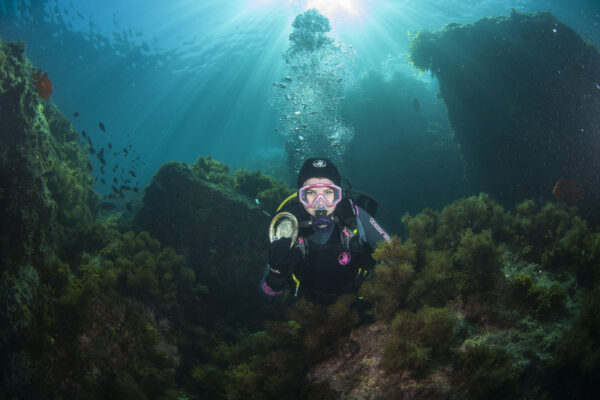 Upon arriving at a little spot known as the Italian Gardens (south of Two Harbors) we immediately jumped off the boat and into some of the clearest, bluest, warmest waters I have ever seen in Catalina. I mean it was just like swimming in the Caribbean. Our hope was that we would be able to dive and shoot with a couple of sea bass… a huge creature that we heard can grow to be as much as 400 lbs. No sharks or sea bass this trip, but plenty of other beautiful creatures like lobsters, stingrays, and fish by the thousands. “Dive with Buddies” that’s what really represented our dynamic. After the dive and a couple of jumps off the top deck of the “Disappearance” we were in the midst of the best dive trip ever. 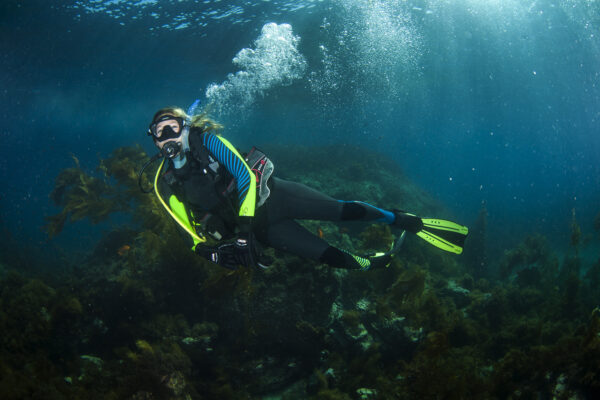 The first dive only lasted about 40 minutes. Our next stop was Cherry Cove, where we would be spending the night. Cherry Cove is just to the north of Two Harbors. An area many call the “other side of the island” if you’re not familiar with Catalina. There are two main towns on the island. Avalon, where the ferry takes tourist by the hundreds or Two Harbors, where it is usually less crowded and more serene.

Before we started grabbing up a mooring ball, we wanted to have a little fun with some of the paddle boards and snorkel gear I will always remember this funny moment. The moment we tried to paddle board in the open ocean, yet none of us could stay standing on the boards. The combination of choppy waters and light boards made it the most hilarious thing for any spectator to observe. I fell at least 5 times before I decided that perhaps I should just float around for a bit with Tessa and Mackenzie (who both also had a hard time getting up). A bit of goofing around and a free dive or two later, we were back on the boat and ready for a night dive. 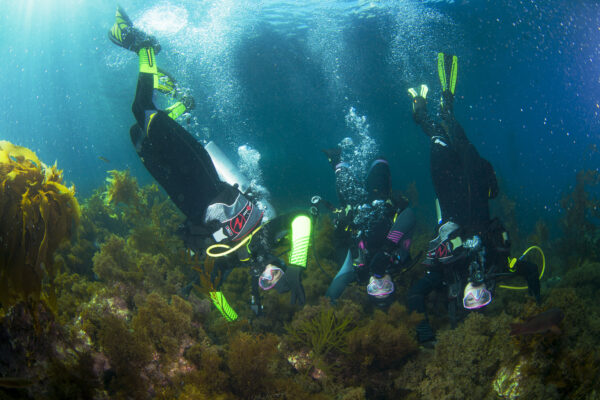 A night dive?! While I had heard of lobster diving before, I had no idea how crazy awesome it would be. The three of us had gotten our licenses together before we embarked. Neither Mackenzie or I had a night dive under our belts and neither of us had ever caught a lobster. Going down at night was awesome. On the way to our location, we decided to swim to the sweet spot with our gear in order to save air. Nothing like laying on your back in the middle of the night looking up, surrounded by black waters, with the only light guiding you are the stars. 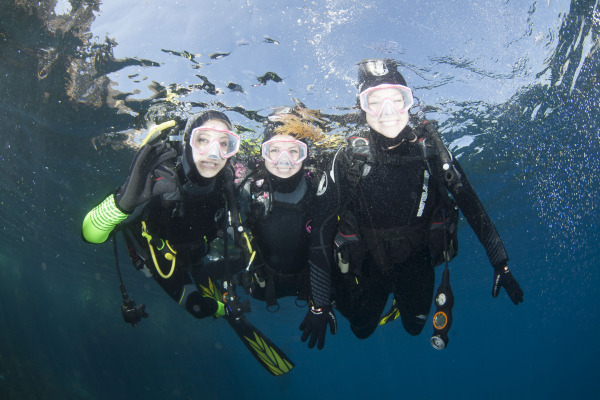 Tips I got on how to catch a lobster: 1.) Pretend it’s a cockroach that you’re trying to squish 2.) Don’t let go. The lobsters on the westcoast don’t have claws— the only thing you need worry about are the horns on their backs— many of which you can’t feel through your dive gloves. I was able to catch two lobsters on my first dive. One of which had a HUGE tail, but teeny-tiny back. The other was just a little guy. After measuring, both were too small to bag. While diving in the dark, I did start to have flashbacks to my late nights of watching shark week.But before I could worry too much, I was re-distracted by lobsters. Mackenzie and I walked away empty handed, but Greg, Scott, and Tessa were able to catch plenty. That night we ate and drank like kings. 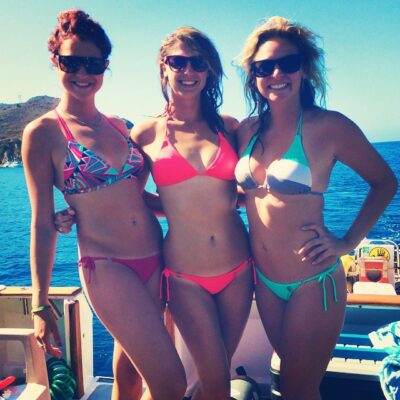 The next day was our last day. Two-day trips really fly by. The first and most important thing we wanted to do before we left was snorkel near the shore at Cherry Cove. This is where I think we got some of the best pictures of the trip. Cherry Cove is a place you could easily snorkel to yourself without having to stay on a boat overnight. Again we had crystal clear water, calm waves, and a gopro in hand. After a few shots of laying in the boat, playing around the rocks, and attempting once more to stand-up paddle—- We put on our dive gear one last time and got some of the most amazing dive pictures of the trip. The spot we found was near the corner of Cherry Cove, just before you reach open ocean at the tip of the rock farthest to the north. There we found a patch of kelp and a huge rock that attracted all sorts of life. Thousands of fish and sunshine shot through like arrows piercing the sea.

A dive trip with Body Glove does not come without the use of some amazing gear. I had the pleasure of using the best gear I’ve ever had while diving. Their wetsuits were “heavenly”. Both my 3mm and 5mm were fabulous. I was even given a great tip on how to easily slip them on! (simply put a little soap and water in a spray bottle and spray the inside of the arms and legs down just a little and you’ll slip right in!).

Wrapping up the weekend was tough. This post doesn’t even do it justice. Hopefully the pictures give you a little more insight into the fun we had. It was like our job for two days was to just relax, have fun, and let someone else capture the moments. This two day trip was by far one of the most fun things I’ve ever done. Tessa, Mackenzie, Greg, and Scott were all fabulous people to spend my time with. Also a big shout out to Robbie, Ronnie, Ray, and Saul for making the trip possible and always making us laugh. Hopefully another dive trip with that awesome group will soon be in order. Off to Malaysia I’ll go next, representing the United States at the International Scuba Pageant. Along the road,  I hope I inspire others to take a moment to dive in. DZ