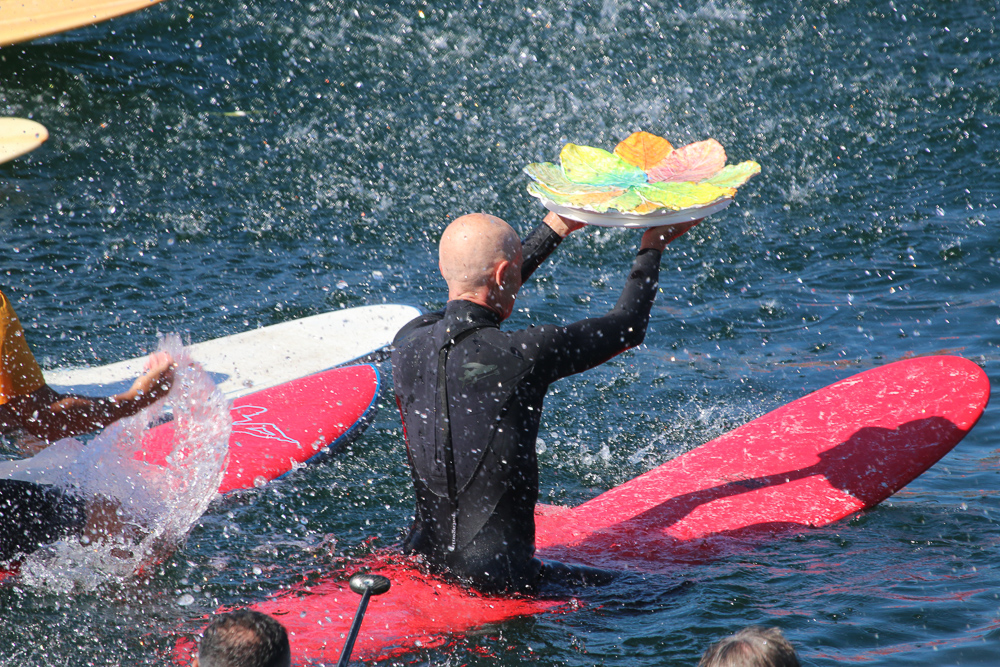 Chris Bredesen said of his fellow Jacobs team rider Mike Doyle, “He was the most influential surfer in the sport’s modern era.” The occasion was Doyle’s April 2013 induction into the Hermosa Surfer Walk of Fame.

On Sunday, during a memorial for Doyle at the Hermosa Beach Pier, Bredesen elevated Doyle to being “the greatest waterman” of the modern era. Doyle’s generation included fellow Hermosa surf legends Dewey Weber, Greg Noll, Bing Copland and Hap Jacobs.

Others who eulogized Doyle on Sunday supported Bredesen’s assessment. Doyle passed away from ALS on April 28, at his home in Cabo San Lucas, Mexico. He was 78,

“Mike long boarded, short boarded, tandem boarded, windsurfed, kite surfed, foil surfed and for something to do in winter, he invented the monoski (a precursor to the showboard),” Don Craig said. Craig, like Doyle and Bredesen, is a Hermosa Surfer Walk of Fame inductee and former Jacobs team rider. 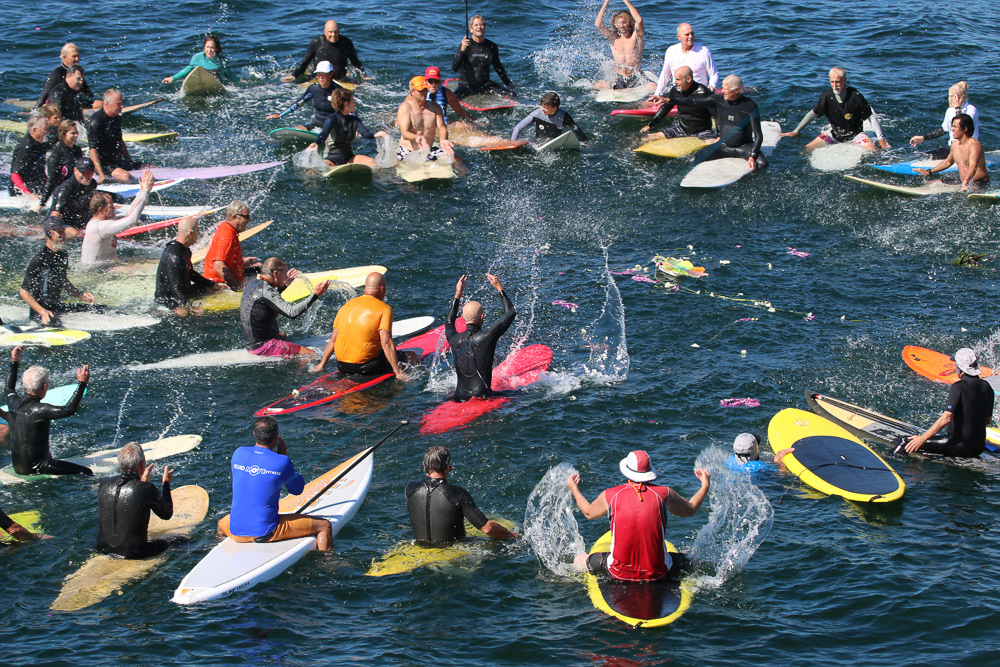 Among the surfing greats attending the memorial was Tom Morey, inventor of the boogie board and co-inventor with Doyle in 1974 of soft top surfboards. Dive N’ Surf’s Ronnie Meistrell said an estimated 600,000 Doyle surfboards, soft tops and stand-ups paddleboards have been sold, exclusively through surf shops. Doyle did not allow big box retailers like CostCo to sell his boards.

Doyle was Hansen Surfboards’ shaper when Don Hansen opened his shop in Cardiff in 1962. He recalled Doyle as a creative genius whose 50/50 longboard became one of Hansen’s best selling boards. 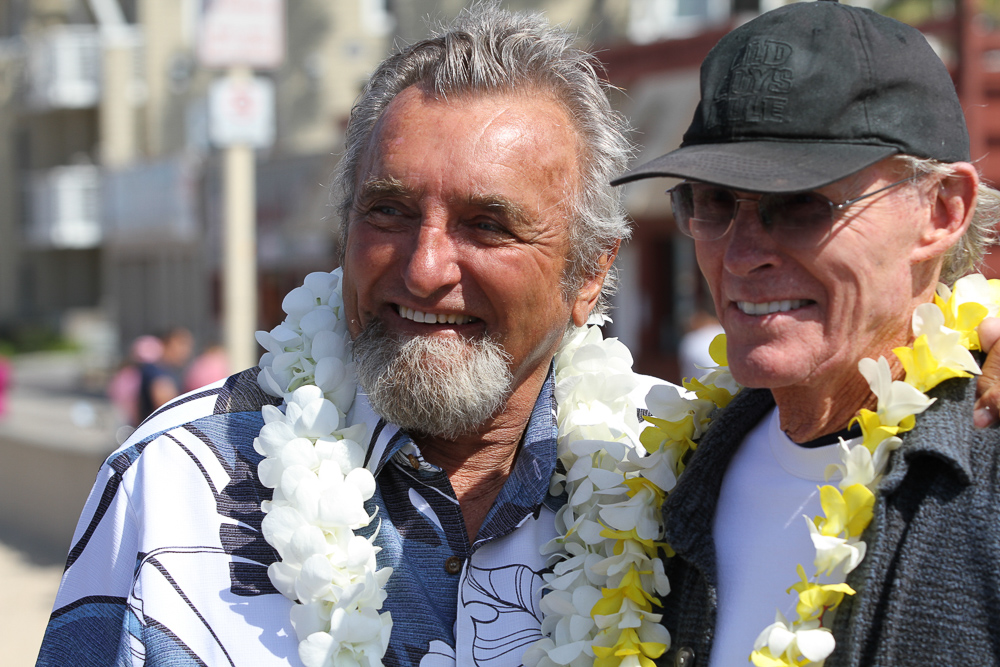 In his youth, that creativity, as much as his surfing, made Doyle “the guy we most respected growing up,” Bredesen recalled. “He painted tikis on his red surfboards, psychedelic paintings on his woodie and wore a full length fur coat. I’d see him pull out of the parking lot at Malibu and think, ‘I want to be like that guy.’”

Bredesen learned of Doyle’s illness a few years ago during a visit to Cabo when he asked Doyle why he was having difficulty walking.

“‘Don’t feel sorry for me. I’ve lived the life of three people,’ he told me at dinner,” Bredesen said. On the drive to that dinner, Bredesen recalled, police stopped their car and were waiting for a bribe, when Bredesen told the cops, ‘This is Mike Doyle. The surfer.’ The cops said, ‘Senor Doyle? Adios amigos.’”

Munoz and Doyle remained friendly competitors in surfing, paddling and stand up surfing into their 70s. 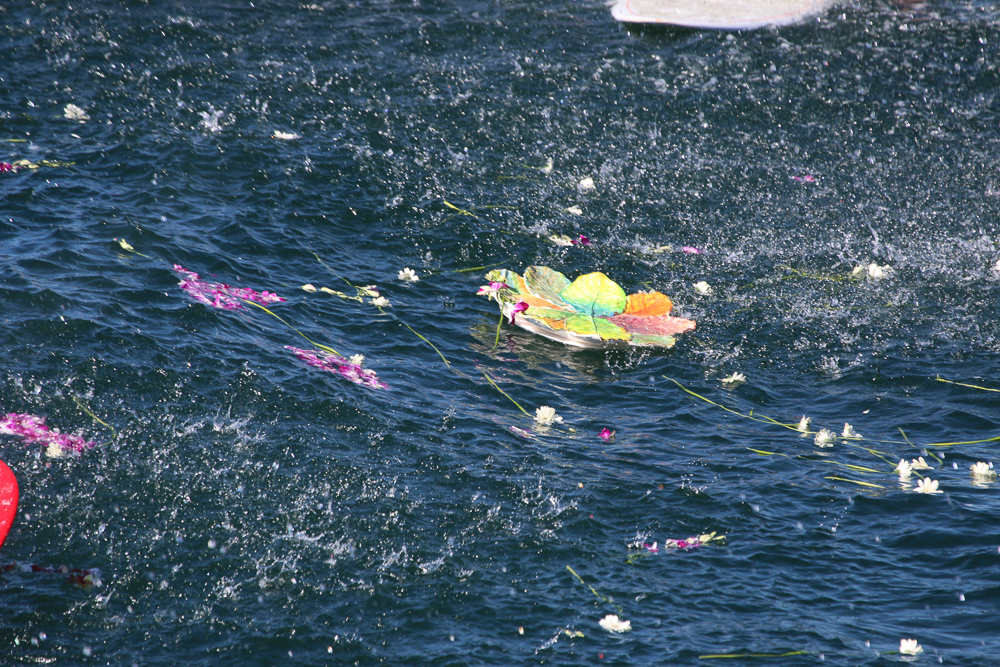 When ALS left Doyle too weak to pull up a windsurfing sail, Munoz recalled at the memorial, Doyle took up kitesurfing so the wind could lift the sail for him. When he became too weak to lift a paintbrush he enlisted friends to paint what he whispered to them.

“He even let me add a few brush strokes to one of his paintings,” Munoz said. “I had to get in bed with him so I could hear what he said because his voice was so weak.”

Munoz credited Doyle’s determination in the face of death to his life as a surfer.

“Tube rides are like a mix of the past, the present and the future. We all know there will be a day when we enter a tube and won’t come out. It’s how we prepare for the inevitable,” Munoz said.

Following the eulogies, over 100 of Doyle’s friends and admirers participated in a paddleout organized by the South Bay Boardriders Club. ER