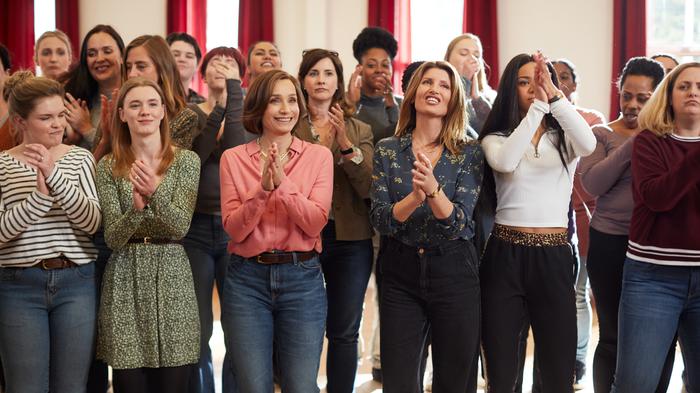 “Military Wives,” directed by Peter Cattaneo of “Full Monty” fame, treads familiar, mine-strewn territory and comes out alive. The soldiers, both men and women, of Flitcroft military base have just been called up for another Afghanistan deployment of up to six months. The spouses will be, once again, left to cope on their own.

The loose social network of spouses has traditionally been led by the wife of one of the commanders, in this case Lisa, the wife of newly promoted captain, Red. Lisa’s idea of a social gathering is coffee in the afternoon and wine and beer in the evening. Lisa has a hard time straddling her new position as Red has come up the ranks and she views herself as one of the gang, not their leader.

Complicating this structure is the desire of the wife of the company commander for a more formalized role in the network. This is something of a breach of protocol, but a necessary one for Kate who is still reeling from personal loss and needs desperately for something to take her mind off the deployment and its dangers. Kate insists that she is there to help, and therein lies the conflict. Kate and Lisa are like oil and water. Kate has never been one of the girls but inserts her will and ideas upon the group regardless. She’s all tea parties, formal dinners, and book clubs. Lisa is coffee klatches, and drunken evenings at the pub.

Kate’s veiled criticisms of Lisa’s disorganized lifestyle and choices do not go unnoticed. It is an unbalanced relationship as Kate, as the commanding officer’s wife, is free to say what she likes seemingly without personal consequence; Lisa is not. Kate proposes a number of different activities, some of which the ladies reluctantly try. That the nascent knitting circle descends into an evening of too much wine and unsuccessful projects is not surprising. 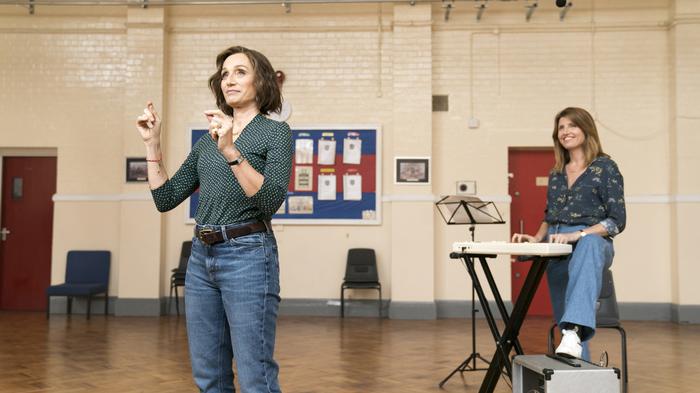 Finally, one of the younger wives proposes that they could perhaps form a choir. Kate is enthusiastic and immediately starts drilling scales, to very bad results. Lisa, on the other hand, finds a key in the popular songs of the day and finds the response that they all needed. Kate and Lisa still disagree on the approach but Lisa begins to see success in this endeavor, as bad as their voices might be, and starts to shine. Kate, acquiescing to the majority, compromises her standards when she sees that the ends are what she was looking for even if the means weren’t.

Grudgingly, all the women draw closer, even to Kate, as they start to feel comfortable with this activity. Word spreads to the high command about this choir and, ready or not, with an emphasis on the “not,” they are invited to be part of a program at the Albert Hall in London.

This is a combination of all the movie clichés imaginable – odds against success, pulling together as a community, loss, triumph, conflict, coming together – but somehow in the end, it works. You know what’s coming but you’ll still tear up. They aren’t trying to save the community, as in “The Full Monty” or do something unexpected as in “Calendar Girls,” but they do find a path and ultimately that path is its own salvation.

The acting is quite strong with the ever illuminating Kristin Scott Thomas as Kate, the stiff who softens, and Sharon Horgan as Lisa, the reluctantly upperwardly mobile working girl who finally understands goal setting. Greg Wise as Kate’s husband the colonel, is warm, supportive, and helps push the story to its satisfying ending.

Peter Cattaneo directs with a sure hand, steering the ship to its predictable end and guiding performance nicely. He could have been helped further by the writers Roseanne Flynn and Rachel Tunnard who never really elevate this based-on-true-events story as they might have with greater character development. Instead they seemed to rely on all the usual the tropes– “against all odds,” “oil and water,” “triumph over adversity.” Nevertheless, the ending exceeds the path to it and you will not regret seeing this film.

Opening May 22 on VOD and HULU.