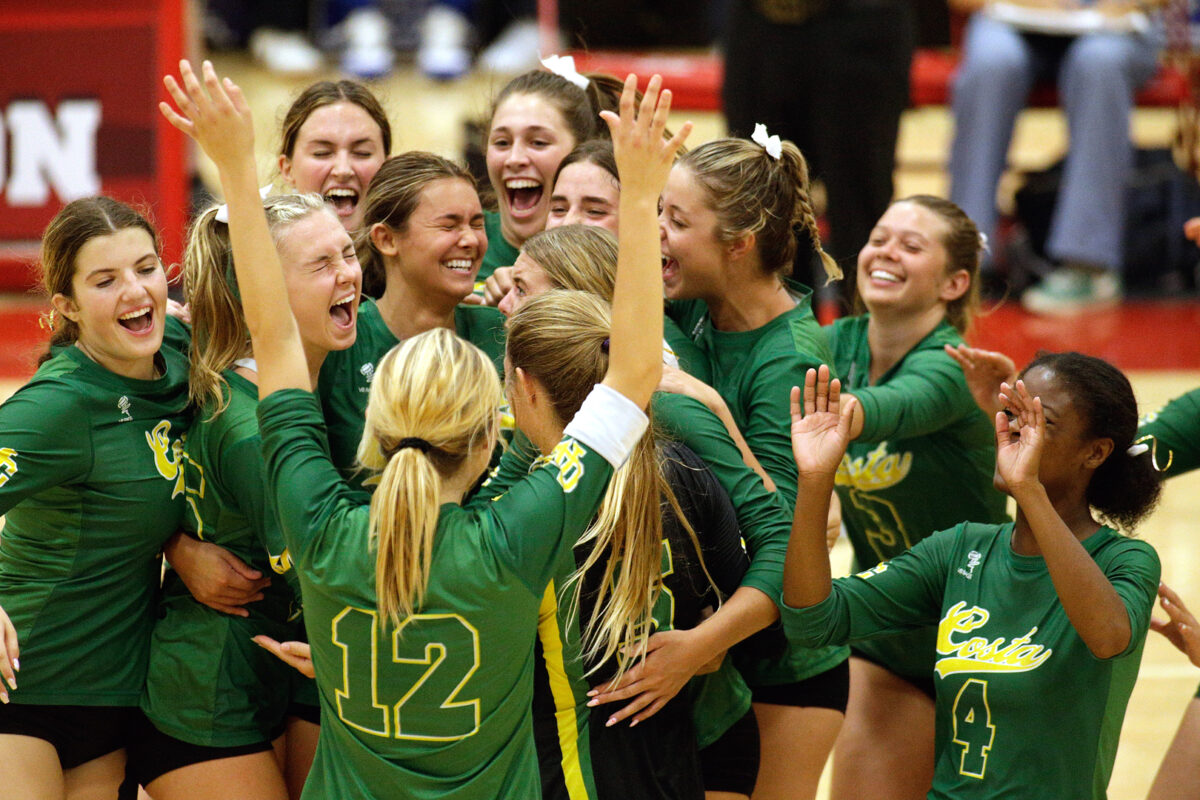 Round one goes to Mira Costa by technical knockout.

Round two will be next Thursday, October 13. It’s hard to see how it could be any more exciting or competitive, but when these two teams share the court anything is possible.

It’s always a special occasion when the Mira Costa girls volleyball team travels all the way to Redondo to play their arch-rival in a Bay League game. As it also is when Redondo travels to Costa, as it will next week for the regular season finale.

But Tuesday night’s match-up of the top-ranked Mustangs and the fourth ranked Sea Hawks was truly memorable, a five-set thriller that had more twists and turns than a Disneyland ride.

Mira Costa already had the best girls volleyball player in the South Bay in junior setter Charlie Fuerbinger. And of course the Mustangs program always presents a quality lineup simply because it has so many talented players, and the school has such a long history of volleyball excellence.

So when you add another star like Rosenthal to the mix, that’s the kind of out-of-the-blue, unexpected lift that can make the difference in a hard-fought, back-and-forth battle between two evenly matched teams that comes down to the last serve, the last set and the last kill.

In the fifth set, Mira Costa (16-2, 5-0) jumped out to a 7-0 lead before Redondo (17-8, 2-2) fought back to close to within a point five different times. But they never could get over the hump, and Mustang junior Rachel Moglia ended the epic battle with a cross-court kill.

Despite the contributions of Moglia and Rosenthal, the Mustangs success came down, as it usually does, to the dominance of Fuerbinger, the 6-foot-2 junior who has already established herself as a worthy successor to former Mustang stars-turned-Olympic-champions Holly McPeak and Alix Klineman.

“Charlie Fuerbringer’s serving really kind of broke our back,” Redondo coach Tommy Chaffins said. “They had two, maybe three runs of six points or longer. That was probably the difference in the match.”

Both Chaffins and Costa Coach Cam Green said the match could have gone either way.

“To be honest, it really was Redondo. Redondo played so well. I think they outplayed us 80 percent of the match,” Green said.  “Honestly, I don’t know how we won that match.”

For his part, Chaffins said the heart-breaking loss will not discourage his team.

“It was an interesting night,” Chaffins said. “We had big leads in (sets) one and four and we didn’t win those. Then we almost catch them, and do catch them (in the fifth). … We’re excited to come back and get better. We like where we’re at.” ER