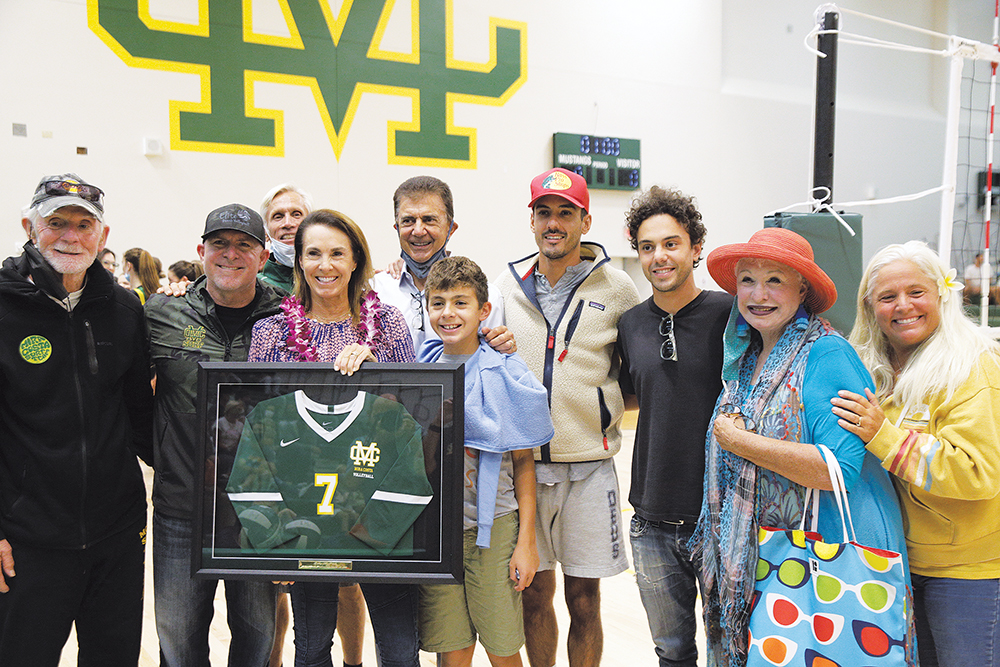 Holly McPeak is joined by husband Leonard, son Leonardo and other family members and friends during her jersey retirement ceremony at Fisher Gym, Tuesday evening. Photo by Ray Vidal

Former Mira Costa High School volleyball star and three-time beach volleyball Olympian Holly McPeak, was recognized with the retirement of her number 7 jersey Tuesday night, prior to the Mustang’s match against Redondo Union.

McPeak led the Mustangs to a 29-0 record and a state championship in 1985. She grew up playing volleyball at Manhattan Beach’s  legendary Marine Street courts. McPeak is second in career earnings on the AVP with nearly $1.5 million, and third in titles, with 72, (behind fellow Olympians Misty May-Treanor and Kerri Walsh). After fifth place finishes in the 1996 and 2000 Olympics, McPeak won the bronze medal at the 2004 Olympics in Athens, with partner Elaine Youngs. Though undersized, at 5-foot-7, she was renowned for her quickness and intense competitiveness.

“She’s a great athlete who will do anything you ask, and she’ll do it twice as hard. She’s the girl who goes the extra mile, and does the extra lifting in the off season,” retired Mira Costa coach Daelea Aldrich said of her.

McPeak returned the compliment Tuesday night, saying of her former Mustang coach ,”Thank you to our amazing leader and  head coach Daelea Aldrich who created a winning culture and taught me life lessons that I use daily. ER