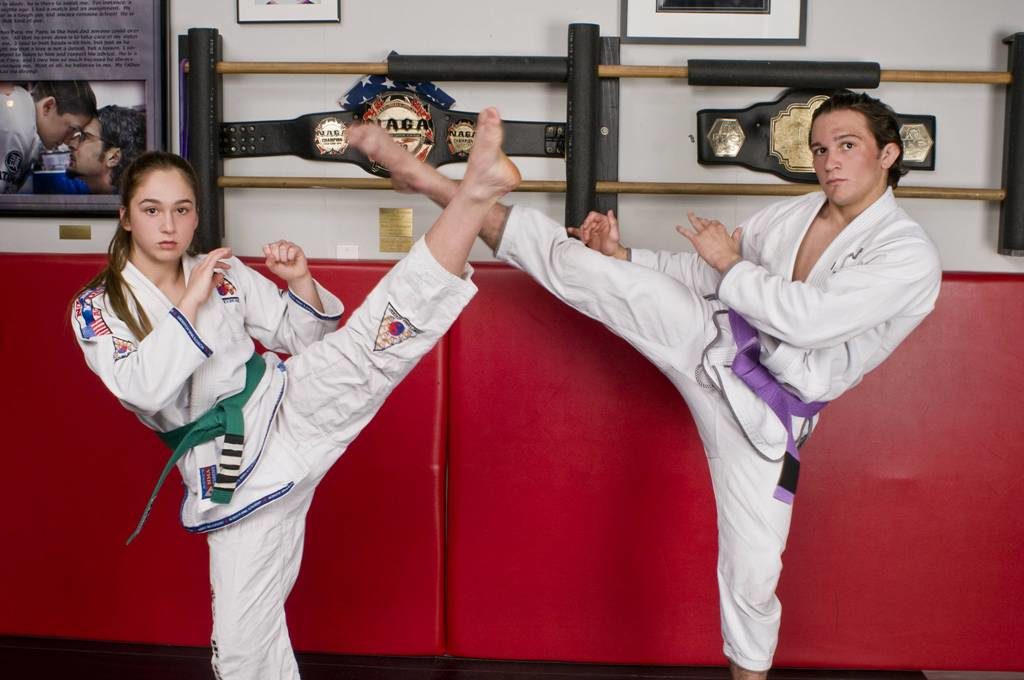 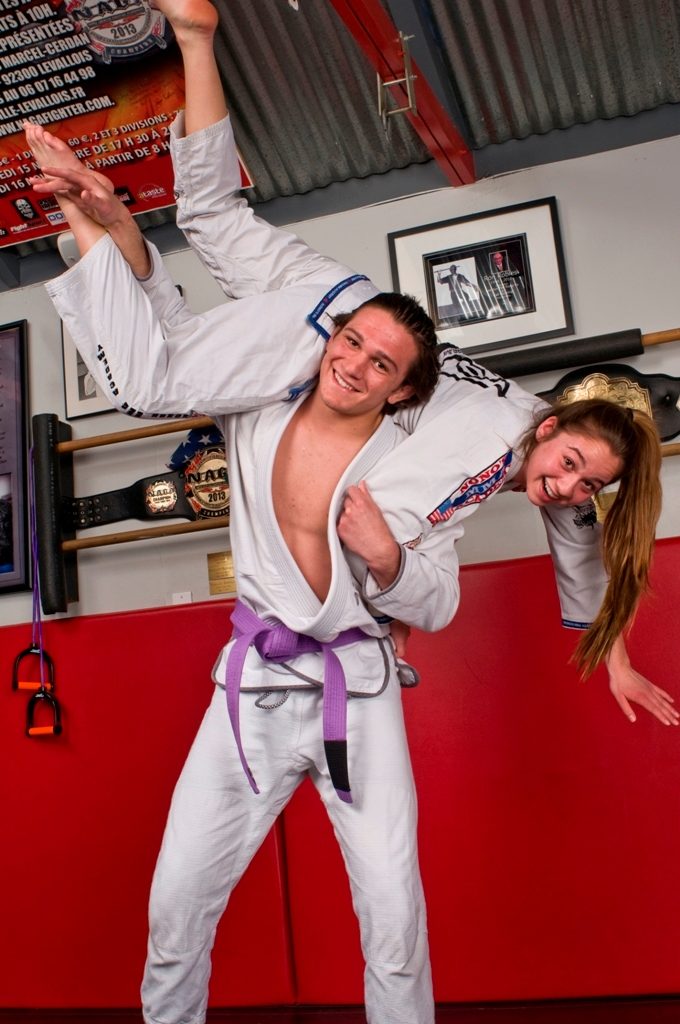 Standing on a mat in New Jersey with her opponent on the other side of the referee, 13-year-old Bianca LeBosnoyani waited anxious for the decision of her jiu jitsu bout. As the referee raised LeBosnoyani’s arm to signal victory, she burst into tears.

“The tears were not from happiness or pain, but from exhaustion. I was completely drained,” LeBosnoyani recalled. “My dad literally carried me out.”

And, In the spirit of a true sibling rivalry, older brother Jean Paul told his younger sister to just “suck it up.”

The victory was Bianca’s first at the Expert level after having an extremely successful run in the Intermediate division.

“My brother was always winning belts and I wanted one too,” Bianca said. “I had a lead and in my mind, I can still hear my dad and brother yelling at me during the match.” 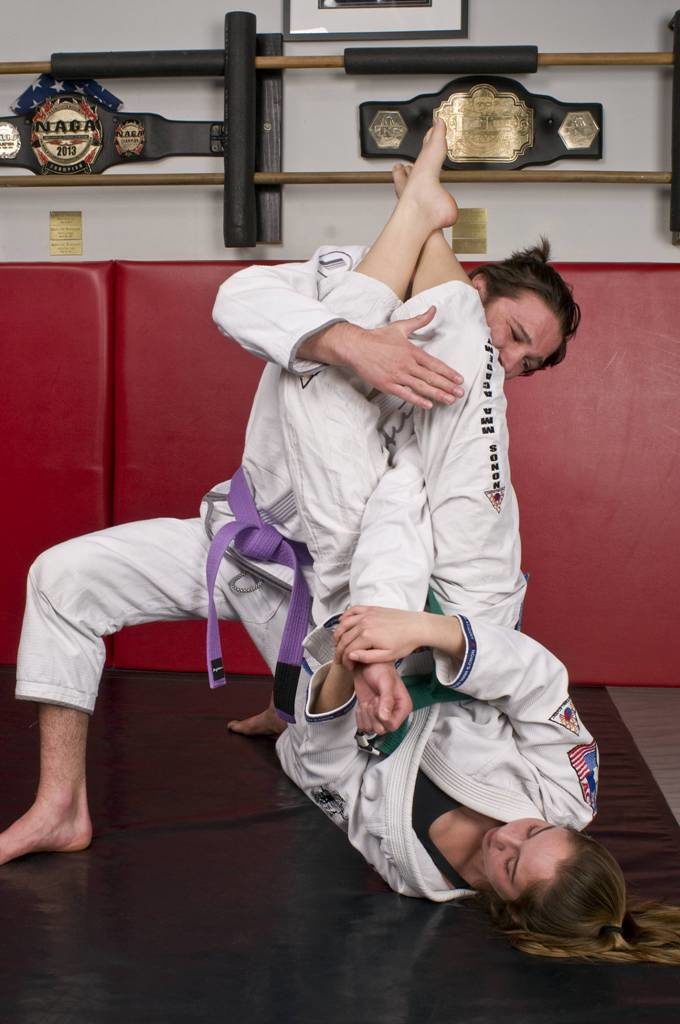 It’s no surprise that Jean Paul and Bianca, a senior and sophomore, respectively, at Mira Costa High School have become outstanding athletes in the sport of jiu jitsu. They have spent much of their lives on the mat. Their father Nono has owned Nono’s One-On-One Hapkido at the same downtown Hermosa Beach location for more than 30 years.

Now 55, Nono began competing in judo and kung fu at the age of 12 and started teaching at 22. In 1983, he earned a 1st Degree Black Belt in Hapkido and has coached legendary UFC fighter Royce Gracie.

“I have been on the mat of my dad’s dojo since I was a newborn,” Jean Paul said. “My father used to carry me in a kangaroo harness on his chest while he taught classes. He would instill things into my brain, explaining techniques. It was our version of story telling or reading a children’s book. But, instead of ‘Living happily ever after,’ it was about how to break someone’s arm.” 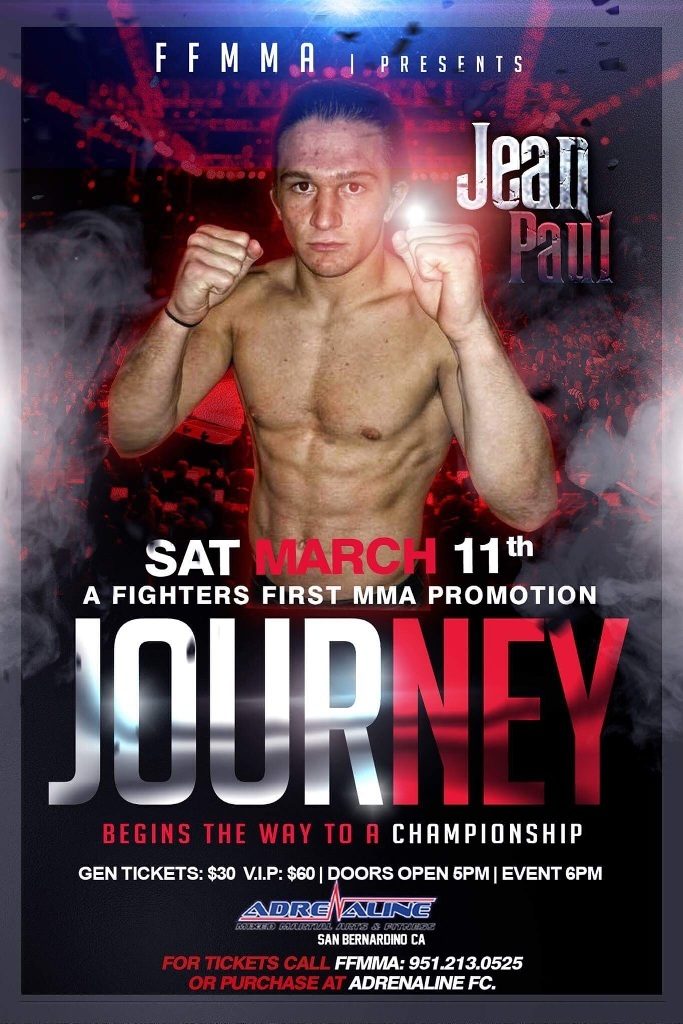 On Saturday, March 11, Jean Paul LeBosnoyani will compete in an MMA fight at the Adrenaline Center in San Bernadino

Jean Paul started training at the age of 3, going through the motions of punching and kicking along with grappling with older kids. When he was 5, he began competing.

In any sport, it is common for a parent who coaches his or her own children to be harder on them, over-compensating for a show of favoritism. The LeBosnoyani situation was no exception.

“Having my father as my coach has been extremely tough at times, but we get along more then we don’t,” said Jean Paul, who recently turned 18. “I lived with my father pretty much my whole life and the fact that we would see each other for hours on end, it caused us to butt heads. After I moved out my father learned to treat me like an adult and I learned to respect my father more. Now we are in a good place.” 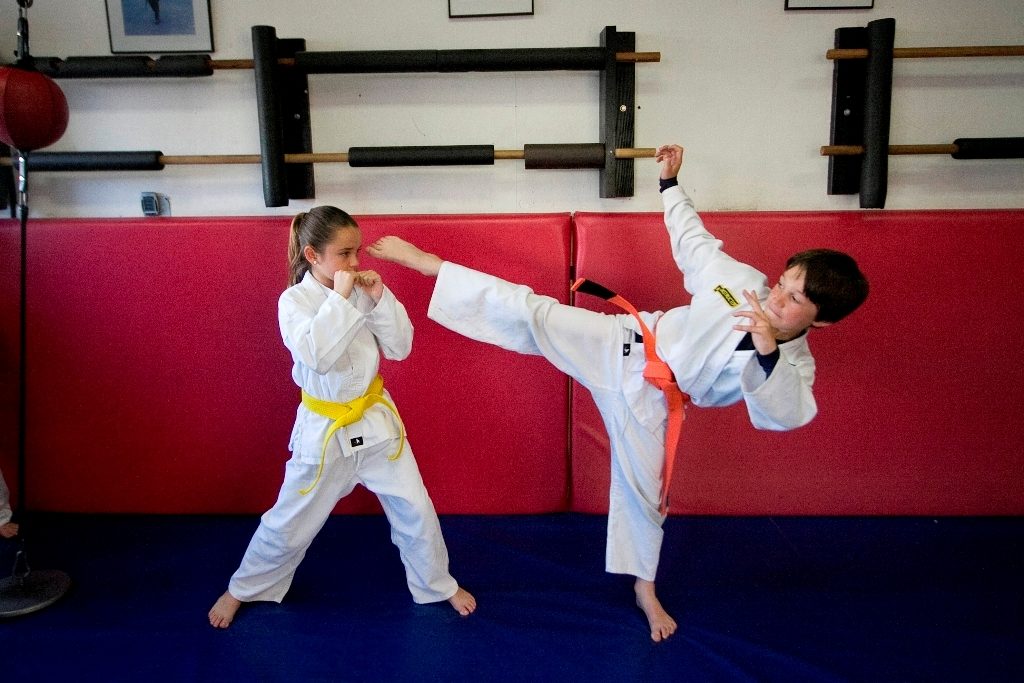 Jean Paul considers his strongest submission is the armbar and is confident he can subdue anyone from any possible position using the technique.

“My most memorable moments in jiu jitsu are when I am concerned the ‘underdog’ in an upper division or when fighting someone who is much more experienced than me and I catch them in an arm bar and win the match. I love proving people wrong.”

Two of Jean Paul’s goals for the year are winning another IBJJF (International Brazilian Jiu-Jitsu Federation) )world championship and making his pro MMA debut in June for Reality Fighting. He eventually would like to become a UFC world champion, in multiple weight classes.

Bianca, who turns 16 in April, is a world champion in her right, but said fighting in the world of MMA is not in her future.

“I just want to go as far as I can in jiu jitsu while enjoying it every day,” Bianca said. “I have no plans for UFC. I just want to keep my belt.”

Growing up, Bianca took ballet and played soccer through 8th grade at Hermosa Valley School, but was always around the sport of jiu jitsu.

“When I was 6 or 7, my dad said it was time for me to get on the mat,” Bianca said. “There were no girls, only boys as opponents, and I was scared. Soon I fell in love with the sport. I really enjoy the confidence and strength it builds – both mentally and physically. The discipline I’ve learned helps make school work a piece of cake.”

Bianca has been a three-time NAGA world champion, two-time Kids Pan Am champion and has world championships at the NAGA Europe and Gracie events.

She also competed in the Eddie Bravo Invitational, a tournament that features academies from around the world.

Ranked among the world’s top jiu jitsu fighters in her age and weight belt divisions, Bianca has held a Green Belt for three years and is working to win a Blue Belt.

She feels her biggest improvement has been in technique and adapting to certain situations, using the arm bar, triangle and choke positions, but believes her strength is in her bottom game.

“I’m comfortable on my back and use my guard game to my advantage.

Bianca joined the Mira Costa girls wrestling team this season. “My jiu jitsu improved because of wrestling, particularly in the take downs,” she said. 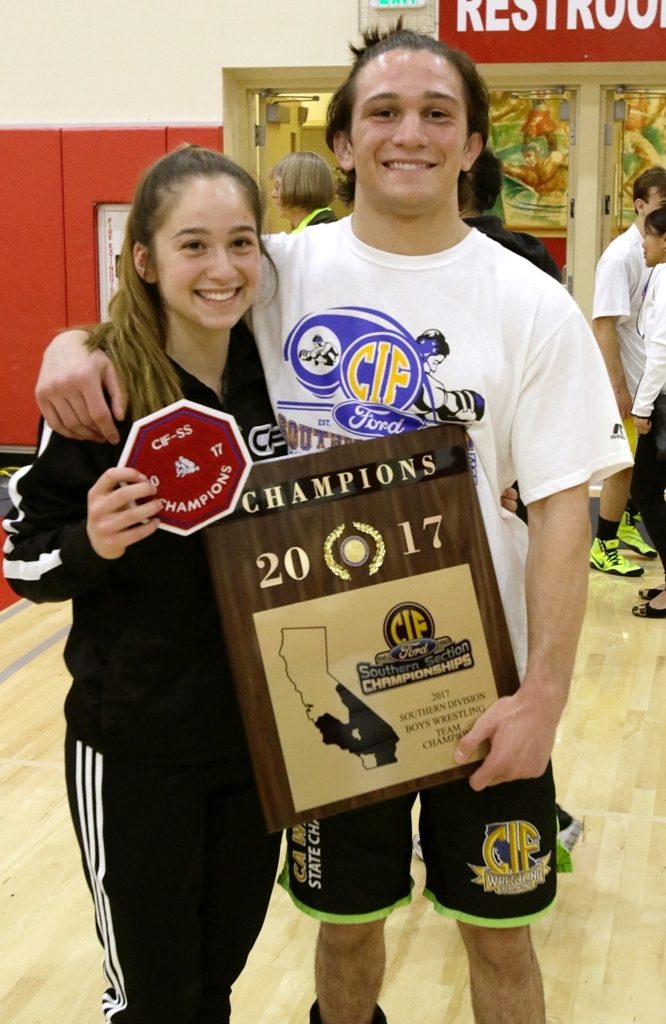 Getting a grip a new sport

“My dad was the biggest influence in my taking up wrestling, along with my uncle Jimmy Packer,” Jean Paul said as he aims to end his four-year prep career with a State championship. “I opposed it for a month. I considered competing in wrestling as jiu jitsu with handcuffs on.”

The new sport took some time to adjust to.

“In jiu jitsu, the ground is your friend,” Nono explained. “In wrestling, it is your enemy.”

Jean Paul credits his coaches, particularly head coach Jimmy Chaney, and his partners on the mat in changing his mindset about wrestling.

“Jimmy’s the mind behind the wrestling operation at Mira Costa,” Jean Paul said. ”From my freshman through my junior year, he instilled the basics of wrestling to me.

“Combining wrestling and jiu jitsu, I feel like I’ve created my own sport. My agility and ability to quickly move into different positions while staying unpredictable is the strength of my game.”

Wrestling in the 170-pound weight class, Jean Paul is ranked No. 5 in the state and won the Bay League individual title while leading Mira Costa to the CIF-Southern Section Southern Division Dual Meet Championship.

LeBosnoyani advanced to the CIF-SS Individual Championships where he placed second after a close 13-9 loss to the No. 2-ranked wrestler in the state. He joined teammate Jared Williams., who won a CIF championship in the 145-pound division, as the two Mustangs to qualify for the CIF Masters Meet.

LeBosnoyani began the season with two first-place finishes, winning the South High Holiday kickoff in November and the Tournament of Champions at Cerritos College on December 30 when he led Mira Costa to a 6th-place finish among 60 schools.

The following week, he was named Most Outstanding Wrestler in the upper divisions at the John Glenn Tournament then placed third at a National Tournament in Temecula.

Jean Paul feels confident he will reach the podium at the CIF State Championships. But despite his success, he said his most memorable moments did not involve tournaments.

“When I look back on my wrestling career, it’s not a certain meet that comes to mind but going through the grind of practice with my teammates while we suffer together to become champions.”

In the classroom, Jean Paul enjoys his Government and English classes, where he also has learned valuable life lessons from his teachers, Glenn Marks and William Brown, respectively.

Jean Paul stated that if he is offered a college scholarship, he would weigh the option but as of now has no plans to attend college right away as he focuses on becoming an MMA fighter.

Despite the urging of her brother and father, Bianca did not begin wrestling until this year. She regrets not participating during her freshman year when she ran cross country.

“They told me wrestling would add a different aspect to my jiu jitsu game,” said Bianca, who quickly emerged as one of the top wrestlers on the Mustang squad. “I already had some grappling technique and worked hard to adapt the take down. Most of the other girls on the team were learning wrestling for the first time.”

Bianca, who competes in the 116-pound weight class, placed first in only her second tournament. She was named Most Outstanding Wrestler at the South Hills Tournament in early January after pinning her opponents in the first of the three periods in each match.

“My time in the spotlight was short lived however,” Bianca said. “My brother was named Most Outstanding Wrestler at a tournament the following week.”

Chaney has been impressed with how quickly the LeBosnoyani siblings have made the transition from jiu jitsu to wrestling.

“Both Jean Paul and Bianca are great students and great people,” Chaney said. “Having world-class backgrounds in jiu jitsu has given them basic ground skills coming in that most wrestlers don’t have. They are also so unorthodox in what they do, that it catches many of their opponents off guard.”

In only her first season in the sport of wrestling, Bianca qualified for the CIF-SS Girls Individual Wrestling Championships with a 7th-place finish at the Southern Regional Meet.

The Mira Costa girls wrestling team is young, comprised mostly of freshmen and sophomores with no seniors and only one junior on the roster.

Bianca said her first wrestling match was an eye-opener.

“I was used to having maybe 1,000 spectators in the stands for jiu jitsu matches, but was so surprised to see all of the girls in the gym. You couldn’t even see the mat, there so many girls warming up,” Bianca said. “I feel so honored to be one of the pioneers in the sport of girls wrestling at Mira Costa. I’m looking forward to the day when I see how much the sport has grown.” B