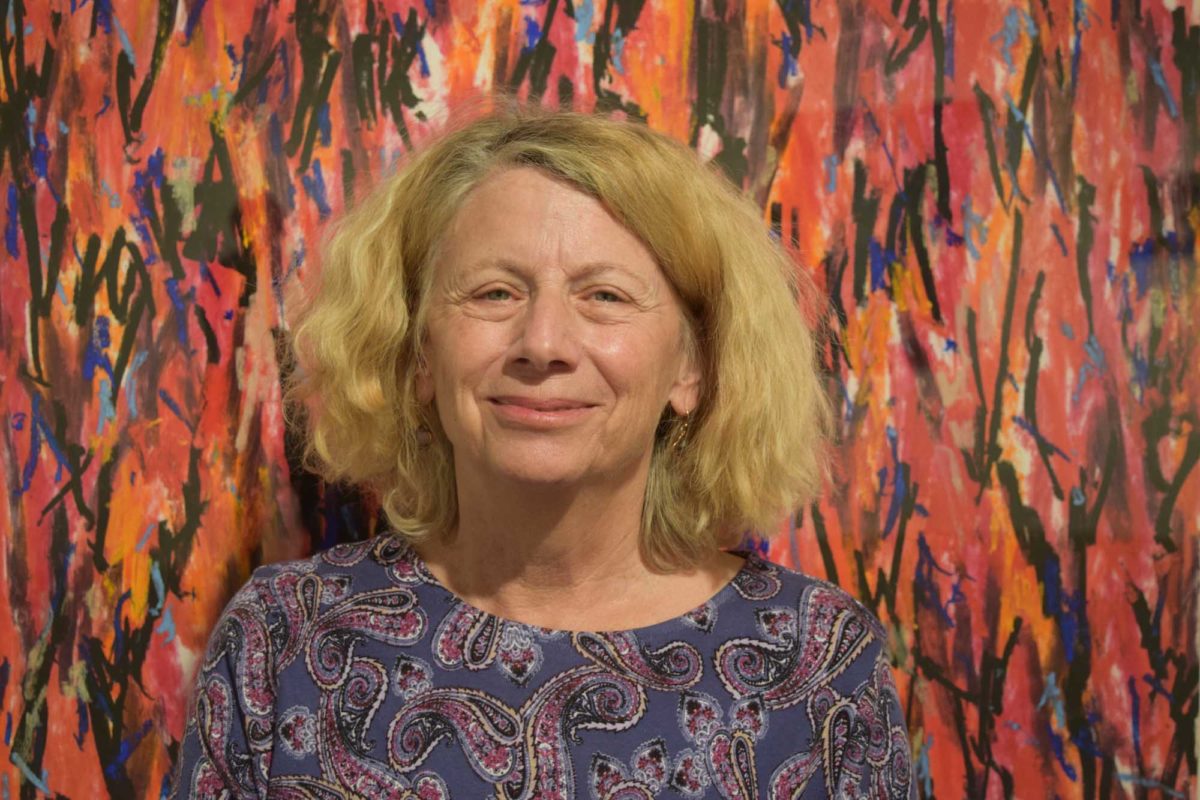 “Moving Line” curator Susanna Meiers. The work behind her is by Philip Vaughan. Photo

“Moving Line” curator Susanna Meiers. The work behind her is by Philip Vaughan. Photo

The Line King
At El Camino College, a “Moving Line” gathers no moss 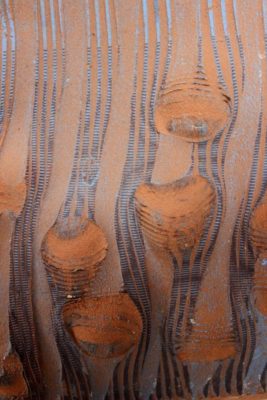 It streaks, it zigzags, it slows down for the curves, and it spirals this way and then that: The “Moving Line” is on the go, and Susanna Meiers, the long-time curator of the El Camino College Art Gallery, has corralled 15 artists who show us exactly what the moving line can do when they merge it into their work. The exhibition has its opening reception tonight (Thursday) from 7 to 9 p.m.
Meiers began planning the show about a year ago.
“Frequently I come upon somebody’s work that I like very much,” she says, “and I think, ‘Oh, this is an interesting thing; how can I develop a theme around that?’ And I believe it was Cheryl Walker’s work that stimulated the idea.”
Walker’s three graphite drawings, each one eight feet long by four feet wide, hang side by side by side at the far end of the gallery.
“Inspired by fluid movement and organic form, each of my drawings is a mapping of a moving meditation and an exploration of the emerging unexpected,” Walker notes in her artist statement. “Automatic drawing and intuitive mark-making give me access to a metaphoric world of imagined imagery that explores growth, renewal, transformation, and the connection between all life forms.”
Be that as it may. After seeing and being impressed by Walker’s art, Meiers “reached out to various people whose work I know and don’t know.” 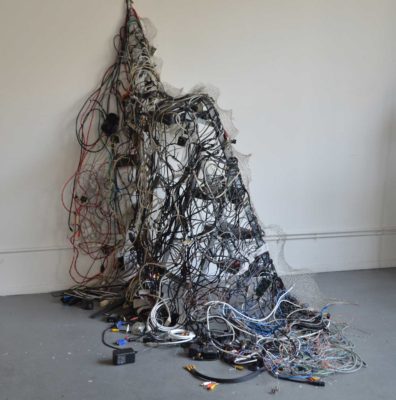 The dawn of creation
Most of the artists in “Moving Line” are represented by three or four pieces. This writer found the small room with the video projections to be particularly fascinating, especially those by Marsia Alexander-Clarke. She writes, “I create my video marks by selecting short portions of recorded video material and extensively cropping them to form narrow cells that contain only a small portion of the colors, textures and movement of the recorded landscape… I hope to convey a non-verbal sensation of grandeur paired to a sense of intimate silence.”
The ceramic wall pieces by Joyce Kohl also invites closer inspection. Essentially these are slabs of clay that look like towels frozen in the act of being shaken out. A couple of them resemble warped wooden washboards that have been meticulously carved, and in fact the thin blue lines on the terracotta-colored clay is a pleasing combination.
In her artist statement, Kohl writes, “While not being cloth, these wall works have some of the characteristics of tapestry. The lines and implied lines appear in rhythmic sequences of color and texture reminiscent of the warp and weft of fabric. Interspersed are more primitive textures and fossil-like intrusions.” 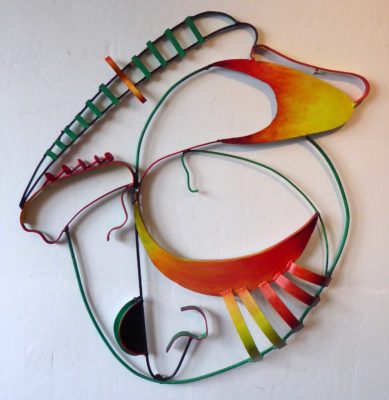 Philip Vaughan’s work crackles with energy. “I have long been interested in the parallels between music and visual art,” he says. “These abstract drawings are like jazz improvisations to me.” He may, for instance, find a track or a melody that inspires him and then set his CD player on “repeat.” “The rhythm of the music translates into the way I draw; often the marks I make on the paper are drawn in time to the beat in a kind of dance motion.” Imagine if there were headphones on the wall next to each of his works so we could hear the music he was listening to during the art of creation.
Standing in front of four colorful expressionist drawings by Pierre Picot, Meiers comments on the vivid impression they make on the viewer:
“Everything’s moving. I think they’re really pertinent to what we’re experiencing these days, too… a metaphor for our country, the politics of the world, let’s say, or it could be what’s happening climatically. I think they’re apropos to the current time.”
Picot refers to himself as a finder, or discoverer, rather than a seeker, although one may think, if you don’t seek, how do you find? At any rate, in his words, “The right ingredient will always find its rightful place, in a discipline free from rules and regulations.”

The ideas that compel them
Additional remarks by other artists in “Moving Line” include:
“As I travel, I explore and digest new lives, and learn as much as I can see,” says Turkish-born Ahmet Arslan. “I think a line does the same thing when you draw. It moves around the paper, explores, and is always learning.” 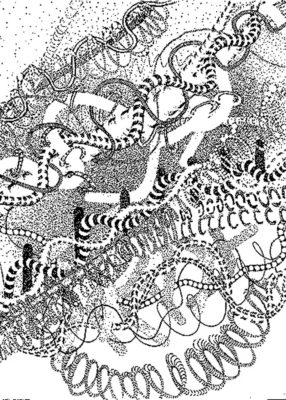 “For these loose line drawings,” Joann Tomsche says of her work, “I bend a thin four-foot dowel till it breaks, then use the resulting end as a drawing nib. This tool gives an uncontrolled, unpredictable line with varying thicknesses that brings life and energy to the drawing.”
Barbara Berk: “I am interested in the physical act of drawing as an extension of the body… The visual vocabulary I use is reduced to basics: line, movement, repetition, rhythm, chance. I get many of my ideas from the context in which it will be shown.”
Chenheung Chen finds the balance between opposites. “My art is about dichotomy: concord and dissonance, order and chaos, the subtle and the powerful… I use recycled materials such as copper wire, electrical wire, and an array of electric and computer components whose original function was to harness electricity and transform its potential, bending it to the will of man.” The snaking pile of wires and cables that seems to geyser up from the floor is one example of how Chen grapples with the physical aspects of our fast-moving Age of Information.
John Montich: “Abstract images have always interested me. Work that bends the ideas of objects, scale and perspective, while still evoking a small part of the representational, provokes thought.”
Karena Massengill: “These recent works represent gestures of thoughtful expressions, lines frozen in steel… The contrast of the content with choice of material has always intrigued me and encouraged my seemingly incongruous love affair between the two.”
Robin Bush-Vance: “My process is instinctive, and immediate: it is moment to moment… I am drawn to many themes: the power of nature, transitory effects of color and space, outsider art. I am interested in sensory moments when the edges and even the center of my pieces fall away and reappear and seem to shift.”
The exhibition also includes work by Norm Looney (large drawings in mixed media on paper from his “Chaos” series that indicate movement through the curving and subsequent breaking of the line), Angie Bray (drawings done while walking beside a long strip of clear acetate with brush in hand, loaded with watery ink), and Anne Scheid (two works, a signature figurative drawing, “Tension and Balance,” and a video, “What’s in a Line”).
Moving Line opens tonight (Thursday) with a reception from 7 to 9 p.m. in the El Camino College Art Gallery, Crenshaw and Redondo Beach boulevards, Torrance. An artists’ talk is set for 1 p.m. on Tuesday in which several of the featured artists will discuss their work and technique. It’s all free. Through March 8. Call (310) 660-3010. ER