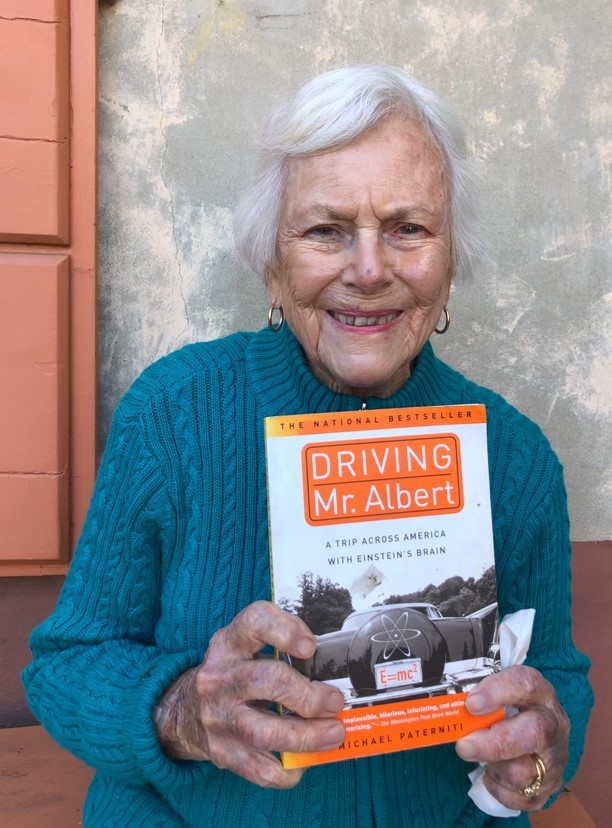 What happened to his brain came as a surprise

I grew up in Princeton, New Jersey, at 117 Mercer Street. Albert Einstein lived across the street,  at 112 Mercer St. I used to pass him on the sidewalk when I walked to elementary school. I was a mathematics dunce, and never said a word to him.

A friend recently gave me Driving Mr. Albert: A trip across America with Einstein’s brain, published in 2001.

Dr. Thomas Harvey, a pathologist at the Princeton Hospital where Einstein died in 1955, was assigned to do Einstein’s autopsy. When he got fired for having an affair with a nurse, he took  Einstein’s brain with him. In 1995, a young journalist named Michael Paterniti received a tip that Harvey, then 83, was living outside of Princeton, and was still in possession of that famous brain. After much negotiating, Harvey met with the journalist, met with Paterniti, and the two agreed the younger man would drive Harvey and Einstein’s brain to California, where Einstein’s granddaughter lived. The book is the story of that drive, with Albert Einstein’s brain floating in a Tupperware bowl in a gray duffel bag in the trunk of Paterniti’s Buick Skylark.

Along the way, the two stopped in on one of Harvey’s three ex-wives, had dinner with William Burroughs near the end of his drug-filled life, and made some eccentric sightseeing stops.

Paterniti, a witty writer, was sometimes exasperated by his eccentric passenger, but mostly tolerant and amused.

But my favorite passage is Paterniti’s description of a visit to Einstein’s home.

On a cold winter day, during one of my early visits to Dr. Harvey, we drove around Princeton, making the obligatory pilgrimage to 112 Mercer Street, the house where Einstein spent the last twenty years of his life. We sat for a while with the car running, warm air pouring from the heater, gazing at a modest wood-frame colonial with black shutters on a pleasant block of like houses. More than anything, Einstein said he loved the old place for the light that filled the upstairs rooms and for the gardens out back. He kept pictures of Michaelangelo and Schopenhauer hanging in his study, because, as he said, both men had escaped an everyday life of raw monotony and taken “refuge in a world crowded with images of our own creation.”

Wait till you find out the final resting place of Einstein’s brain. You will be amazed. Pen