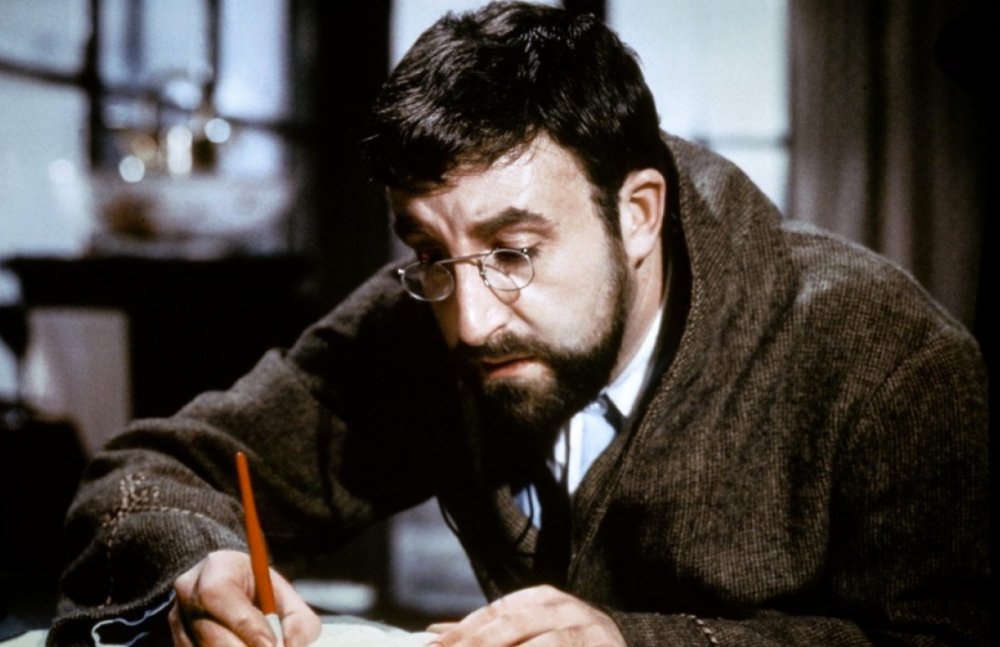 “Mr. Topaze,” a long lost film from 1961 and Peter Seller’s directorial debut was a one-off. Although maintaining a controlling hand in many of his features, this was his sole feature credit as a director. Watching the film, you will understand why.

Originally written in 1928, “Mr. Topaze” was a highly regarded stage play, the first solo work of Marcel Pagnol who would become famous with his Fanny trilogy. Starring Frank Morgan (the wizard in “The Wizard of Oz”), the English language version opened on Broadway in early 1930 and had a limited run.

The story is universal: the triumph of greed and ambition over honesty and morals.

Mr. Topaze is an honest man. Teaching in a small village school run by a tyrannical headmaster, he enjoys the challenges, his colleagues, and his village. Despite his unrequited love for Ernestine, the headmaster’s daughter, a fellow teacher who takes shameless advantage of Mr. Topaze’s good nature, he is pleased with his life. The posters in his classroom proclaim that money doesn’t buy happiness and other clichéd sayings and he lives his life according to those mottos. Poorly paid, he takes on the occasional tutoring job to make ends meet and one of those jobs brings him in contact with the owners of a local chateau, Castel Benac and his mistress, the music hall star Suzy.

The overbearing headmaster has delusions of grandeur but also a realistic grasp of what he must do to stay in favor with the one wealthy patron of his school. The Baroness appears at the school accusing Topaze of making a dreadful error in grading her son. There must be some mistake as he has earned a 0 in all subjects. Topaze graciously agrees to recalculate the grades and again comes up with a big fat 0. In gratitude to his sincerity and standards, the headmaster fires him on the spot.

Unemployed but true to his values, Topaze is sure that something will come along. And come along it does. At just that moment, Castel Benac, an unscrupulous financial crook, has lost the middle man in his various fraudulent schemes. Skimming money from corrupt local government officials when selling equipment at inflated prices is as old as the day is long in summer. The aristocratic Roger de Bersac, chosen because he had title and no money, has now made plenty from his previous dealings with Benac and wants a great deal more. Benac, unwilling to cut into his profits, lets him go. It is Suzy, recognizing that Topaze would be the perfect patsy, puts him forth as their new middle man. On top of that, his financial needs are very modest and his naiveté in the ways of the world make him ideal.

But as Topaze’s eyes are gradually opened, he changes from what he once was into what he previously deplored.

The story is a good one and it was what launched Pagnol into his career as one of France’s greatest writers of the twentieth century. His simultaneous career as an important filmmaker, transforming his plays and novels into movies, led to his induction into the French Academy, the first filmmaker ever elected.

Much went wrong with Sellers’ adaptation of this film. Certainly the script was stilted and flat, but the primary blame falls to the director. The actors were all very well established and many of them had already acted or would act with Sellars in other films.

Foremost among them is the unfortunate Leo McKern (“Rumpole of the Bailey,” “Ladyhawke,” “The Mouse that Roared”), a wonderful character actor who is so over-the-top as the headmaster that he’s a buffoon and sets the tone for the film as a diatribe of good vs. evil in a totally unrealistic way. There is not an ounce of subtlety in his performance. Billie Whitelaw as Ernestine is considered one of the great cinema actresses of Britain (“The Krays,” “Hot Fuzz,” “Maurice”) but you’ll not get much of that here. Certainly the part is poorly written but there are no shades of gray in her performance as the object of Topaze’s affections.

Herbert Lom as Castel Benac does what he can with his role as the villain. Sellers must have loved him because he became the beleaguered Chief Inspector in the Pink Panther movies. In the small role of the aristocratic Roger de Bersac, John Neville imparts a great deal of nuance to his greedy “middle man.” In what becomes very much an aside, something that should have been more highlighted, de Bersac makes it very clear that no matter how much money Benac accumulates, he will never have what de Bersac has —class, name, and station. In so many ways, he is the true antagonist to Liberty, Equality, Fraternity, Topaze’s beloved philosophy.

Nadia Gray as Suzy the music hall star actually found her footing and while doing despicable acts maintains a vulnerability and warmth. And last, but definitely not least, is Sellers himself as Mr. Topaze. It is easy to see why he gravitated to this role as it offered him the opportunity to go from idealist to cynic. Sellers is hamstrung by both the script and himself. His meek teacher is simpering, sweet enough to bring on a severe case of diabetes, and totally banal. Although his transformation to the dark side is without gradation, he starts to leap from the background. He’s good and then he’s bad. His “good” is very uninteresting but his unearned transformation to the dark side is fantastic. In his final scenes, he has grandeur, cynicism, and a physical beauty that was not in evidence until all of a sudden it was. Pity. His final scenes are breathtaking in depth.

As a moment of screen history, this is a film worth watching as long as it can be done without expectation. It certainly explains why Sellers did not direct again. It was clearly not his forte; acting and especially comedy was.

Launching February 26 on Film Movement Plus, a streaming service specializing in independent films and world cinema, as well as arthouse classics and documentaries.