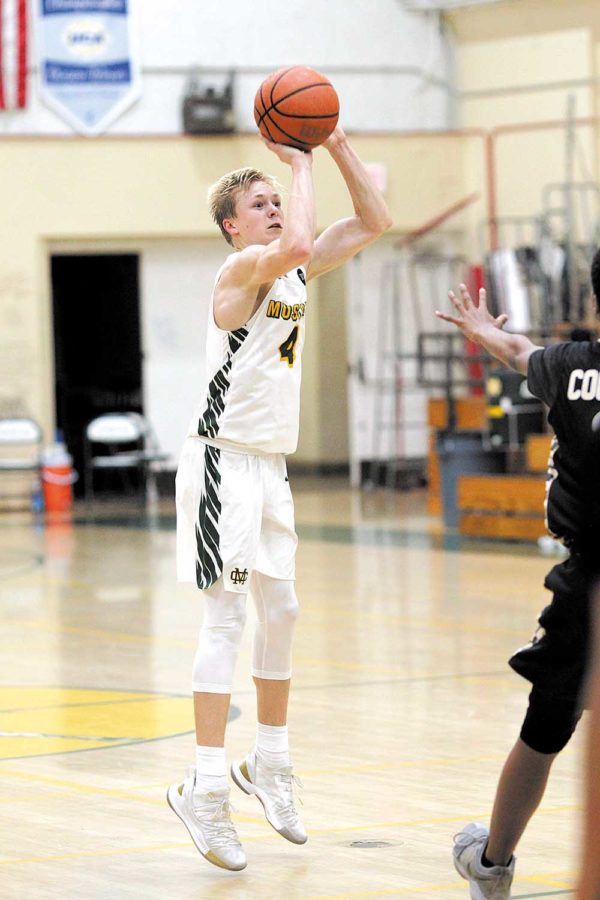 And all this was after an 81-74 loss in which his defense-first team gave up more points than it had allowed in any game all year!

The congratulations were for the fight his team showed after it went down 16-7 in the first quarter and looked primed for an early knockout by a team ranked 70 spots higher in the state by MaxPreps.

And it was for guiding his players to Costa’s first Bay League title in 20 years.

But most of all it was heart-felt gratitude for returning a sense of hope and belief to the Mira Costa hoops program after a dismal decade of mediocre seasons, lop-sided losses and player defections to better programs. There was a generally unhappy atmosphere surrounding the team like an early morning ocean fog as it was forced to stand by and watch arch-rival Redondo reel off seven straight Bay League championships.

Even worse, the Sea Hawks dominated the Mustangs in 14 straight victories since 2012 — an astounding streak that was finally snapped this season in what was surely the Mustang’s emotional highlight of the year, a 52-48 win at the Sea Hawk Pavilion last month. 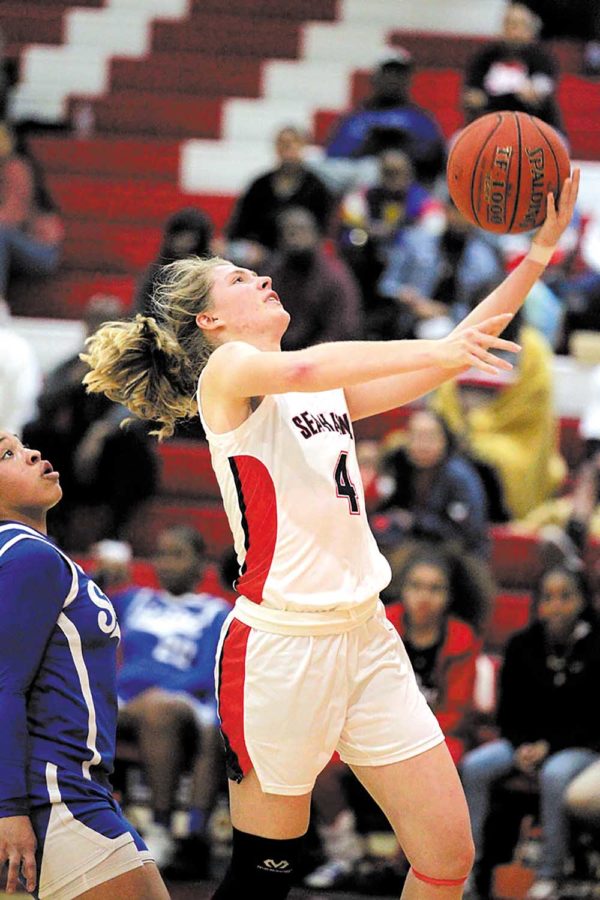 Sea Hawks Anna Johnson put up 48 points in her teams second round, double-overtime loss to Chaminade, 103-100.

The most incredible part of the turnaround was that the Mustangs accomplished all this in the second year of what was projected to be a long-term rebuilding project that would, one day in the far-off future, produce a Bay League title and a team that was a perennial league contender.

Almost as amazing was that Perlmutter accomplished it during a two year period of hoops homelessness, in which the Mustangs wandered between El Segundo High School, where its two playoff games were held, Manhattan Beach Middle School, whose mini-gym was never intended for varsity level games, Redondo High School, which was able to offer only a few available dates, and Da Vinci High School in El Segundo. That homeless status is expected to end when Costa’s $38 million athletic complex is completed next fall.

Perlmutter is a 39-year old walk-on coach – meaning he doesn’t teach in the school system. He’s a Manhattan Beach resident who calls himself an entrepreneur and holds an MBA from IESE Business School in Barcelona, Spain.

A hoops junkie who captained his Santa Barbara-area high school team and attended Duke (but did not play for the Blue Devils) he started out coaching at the freshman level at St. Bernards and quickly worked his way up to be the head coach at West Torrance. He was hired at Mira Costa in the spring of 2018 from a large pool of applicants, mainly on the basis of the quick chumps-to-champs turnaround he pulled off when he coached the Warriors to their first-ever CIF title in 2017.

No one thought he could do it again so quickly, except Perlmutter himself. He began telling friends and colleagues even before the season began that he had three exceptional freshmen – jack-of-all-trades Will Householter, sharpshooter supreme Dylan Black and potential post monster Jude Harris – to supplement the team’s three returning seniors in slick point guard Max McCalla, glue-guy Matt Cammock and scoring guard Tyler Antrobius.

Still, none of those seniors had averaged more than 5 points a game last season, and the three freshmen were untested against varsity competition. Despite all those question marks, Perlmutter — and his staff of Chano Rashiduddin, Greg Sarksian, Gordon Sutton and Tom Marumoto — coached them up well enough to produce a 9-1 league record and 19-8 overall, earning a first-round home playoff game. 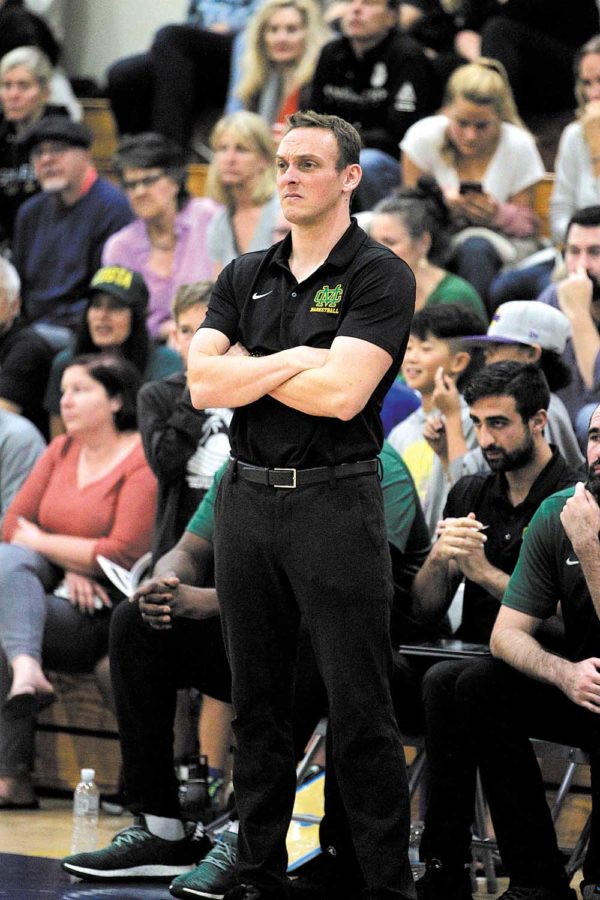 Neal Perlmutter coached the Mustangs to a league title in only his second year.

The Mustangs dispatched San Clemente 49-42 last Wednesday in a first-round match-up as Costa forced them to play its type of game – a low-scoring affair in which every shot was hotly contested and every loose ball was fought for like it was a $100 bill. But after winning a coin toss that entitled them to another home game, Perlmutter knew the second round would be much tougher against Pacifica Christian, whose team is bigger and stronger than Costa at every position and features a couple of Division 1 college prospects in Houston Mallette and Tommy Bahadoor.

This is exactly what Pacifica did, as they started raining jumpers and roared out to a 16-7 lead that forced Perlmutter to call a quick time out.

That response started with a corner 3-pointer by Black, the freshman with the perfect shooting mechanics and a burning desire to be a great player. A minute later Black drilled another 3-pointer and the Costa crowd came back to life. When he hit yet another 3-pointer to beat the buzzer and pull the Mustangs within 22-20 at the end of the first quarter, the crowd was in a full-throated frenzy.

The Mustangs took their only lead of the game at 28-27 when Antrobius hit two foul shots mid-way through the second quarter. Pacifica answered with an immediate trifecta to grab the lead back, and led the rest of the way.

But Costa never quit, and McCalla came alive in the second half, continually getting into the paint and hitting tough shots or finding teammates like Black for wide-open shots.

“I think it was the best game of Max’s career,” Perlmutter said later. “I’m so proud of him.”

The Mustangs closed to within 59-56 early in the fourth quarter, and the game hung in the balance as Pacifica responded with a barrage of outside shots that found their mark.

McCalla finished with 21 points, Black rang up 17 while hitting five 3-pointers, and Householter and Cammock each chipped in with 11.

When the smoke cleared from the first two rounds of the playoffs, only the Lady Mustangs were left standing from the beach cities schools. First they went on the road to crush Ribet Academy, then they hit the road again to upset Sage Hill 44-42 when Cara Susilo scored a three-point play with 37 seconds left in the game. That second-round victory earned them a home game Wednesday night at El Segundo High against Santa Fe.

The Redondo boys were routed by Bishop Montgomery in the first round, an appropriate ending for the first Sea Hawks team that failed to win the Bay League in 8 years.

And the Lady Sea Hawks bowed out after the wildest game of the year: a 103-100, double-overtime second-round loss to Chaminade in which Anna Johnson scored an astounding 48 points and Alyssa Munn, their best player all year, chipped in with 33.