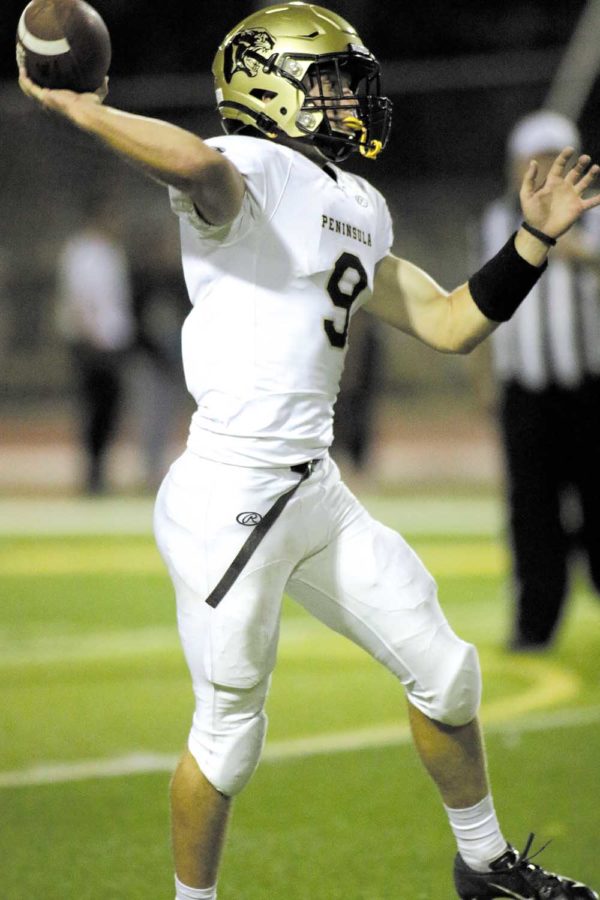 Mira Costa won a wild 35-27 shoot-out with Peninsula Friday night, but had to survive an epic 21-point Peninsula comeback, a 20-minute blackout and a last-second on-side kick that could have given the Panthers one last chance to send the game into overtime.

“What a great game!” said a happy and relieved Mira Costa Head Coach Don Morrow as his team exchanged handshakes with the Peninsula players. “We’ll take the win and get ready for next week.”

There was a lot to like about the way the Mustangs played a week after getting bulldozed by Palos Verdes amidst a barrage of fumbles and interceptions.

“Our ball security was much better this week,” Morrow said. “We worked on that all week.”

But there was plenty to dislike too – 21 points worth of dislike.

“I didn’t like our sloppiness, the way we let up and let them get back in the game,” he said.

It was a crazy, see-saw ride all night for the fans who filled Waller Stadium, looking for the Mustangs to start a new winning streak after PV snapped their previous streak at three.

Everything went according to script – at least for the first half. Mira Costa controlled the action, ripping off two long touchdown drives behind the pin-point passing of junior quarterback “Slingin’” Sam Whitney and his talented receiving corps of Thomas Southey, Kayle Marsh, and Kian Towfighi.

After several exchanges of punts to start the game, near the end of the first quarter   Mira Costa began a drive from the Peninsula 42-yard line. It turned out to be a one-play drive. Whitney uncorked a 58-yard howitzer blast that found Marsh on the 10-yard line. He caught the perfectly thrown ball in stride and beat several defenders to the end zone. 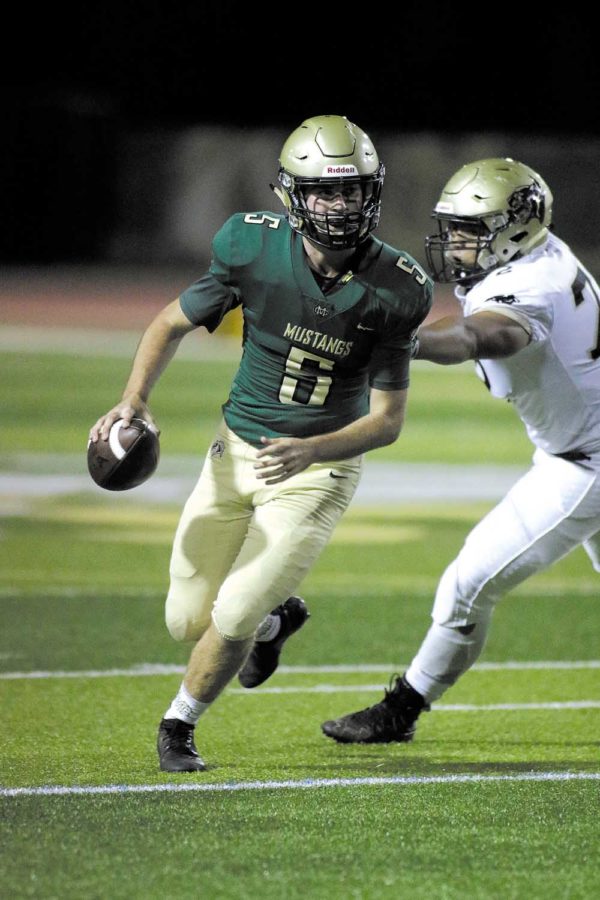 In the second quarter, Costa’s defense continued to stifle Peninsula behind the ball-hawking of defensive back Jackson Fischer, the in-the-trenches pounding of Hank Dunlap and 240-pound freshman workhorse Jagger Tavai.

After holding Peninsula short of a first down on a fourth-and-one play, Costa unveiled a trick play that worked to perfection. Whitney handed the ball off to Fisher on what appeared to be an end-around-reverse, but instead, Fisher pulled up and launched a 40-yard pass to Towfighi on the 17-yard line. On the next play, Whitney hit the versatile Fisher for a 17-yard completion and a TD that gave them a 14-0 lead heading into halftime.

The Mustang onslaught continued into the third quarter. On their opening drive, Whitney had consecutive completions of 9 yards to Fisher, 17 yards to Southey and then, on first and 10, a 52-yard bomb to Marsh for a TD that put them up 21-0.

As the crowd of mostly Mustang fans settled back into their seats with an air of contentment, the game appeared to be over for all practical purposes. Instead, just the opposite happened. Peninsula seized control of the line of scrimmage, started stifling Costa’s prolific offense, and let quarterback Jack Haworth loose for a furious passing attack.

And just like that, the entire complexion of the game changed. Haworth delivered a 25-yard completion to a wide-open receiver and suddenly it was 21-7 with 7:24 to go in the third.

Still, the vibe from the Mustangs and their fans was: no worries, we’ve got this. But they didn’t. Four minutes later Haworth connected on a short TD pass to cut the lead down to 21-14.

The ominous feeling hanging in the warm night air grew even stronger as Haworth did it again, launching a 21-yard TD pass that stunned Mustang fans and tied the score at 21-21.

Now fully woken up, Whitney drove the Mustangs with completions of 35 yards to Southey, 20 yards to Fisher and finally a 4-yard pass to Southey into the left flats that restored the Mustang lead, at 28-21.

With 3:52 left in the fourth quarter, Peninsula faced a 3rd and 10.  Everyone in the packed stadium knew it was likely to be a pass, including defensive back Bryce Carlisle. Haworth directed his pass to the left sideline in front of the Costa bench, but Carlisle leaped in front of the receiver, grabbed the ball and fell out of bounds as his teammates dog-piled him and the home fans screamed into the night.

“That was a huge play by Bryce,” Morrow said. “Biggest play of the game.”

On the first play following the interception, Fisher took a direct snap from center and sprinted 10 yards to the 10-yard line. Incredibly, the Mustangs ran exactly the same play on the next down. This time Fischer galloped 10 yards into the end zone for a 35-21 lead with just 3:22 left. Surely the Mustangs had finished off the Panthers this time.

But before Mira Costa could kick off the stadium crowd erupted with the loudest screams of the night when the entire stadium – except the scoreboard – went completely black.

Mira Costa Principal Ben Dale and several engineers rushed up to the press box and diagnosed the problem as a simple automatic turnoff of the lighting system. They re-booted it, and while the crowd partied by the light of their cell phones the lights were incrementally restored.

Given a reprieve by the 20-minute blackout, Haworth quickly drove the Panthers downfield and kept the ball himself for a TD. His attempt at a 2-point conversion was intercepted, and the score stood at 35-27 with just 27 seconds left.

The Panthers still had a chance to tie the game if they could recover an onside kick, score a TD and cap that off with a 2-point conversion. But Costa smothered the onside kick and the wild, crazy game was finally over. Fans streamed onto the now fully lit field.

The win lifted Costa’s record to 1-1 in the Bay League and 4-3 overall. Peninsula fell to 1-1 in the league and 2-5 overall. Across town, Redondo beat Leuzinger to push its record to 5-2 overall and 2-0 in the league. Both the Sea Hawks and the Mustangs look to build momentum for their annual end-of-the-regular-season-showdown. This year it will be held at Costa.