Top ranked in CIF Division 1, Mira Costa improved its season record to 17-1 with a 25-12, 25-23, 25-21 victory over Esperanza in the championship match of the Karch Kiraly Tournament of Champions in Santa Barbara. With 21 kills in the final two matches, Jace Olsen was named tournament MVP for the Mustangs, who won the title for the second consecutive year. 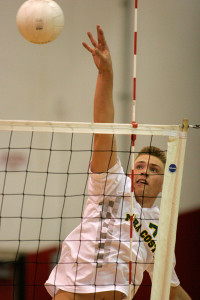 Mira Costa swept Santa Ynez and Clovis West on Friday before taking down Division 1 rival Newport Harbor in four games before sweeping Esperanza (No. 3 in Division 1).

Kevin Donohue had 18 kills on Saturday and Eric Mochalski added 16 kills and 14 blocks. Both were named to the all-tournament team.

Redondo (15-7, 2-2) swept Peninsula for its second league win on Tuesday. Ryan Olson had 16 kills and Trevor Butler added 11 in the victory.

The Sea Hawks play at West Thursday at 4:30 p.m. before seeking revenge at Palos Verdes Tuesday in a 3:15 p.m. contest. Palos Verdes came from two games down to defeat host Redondo in five games on April 1. ER