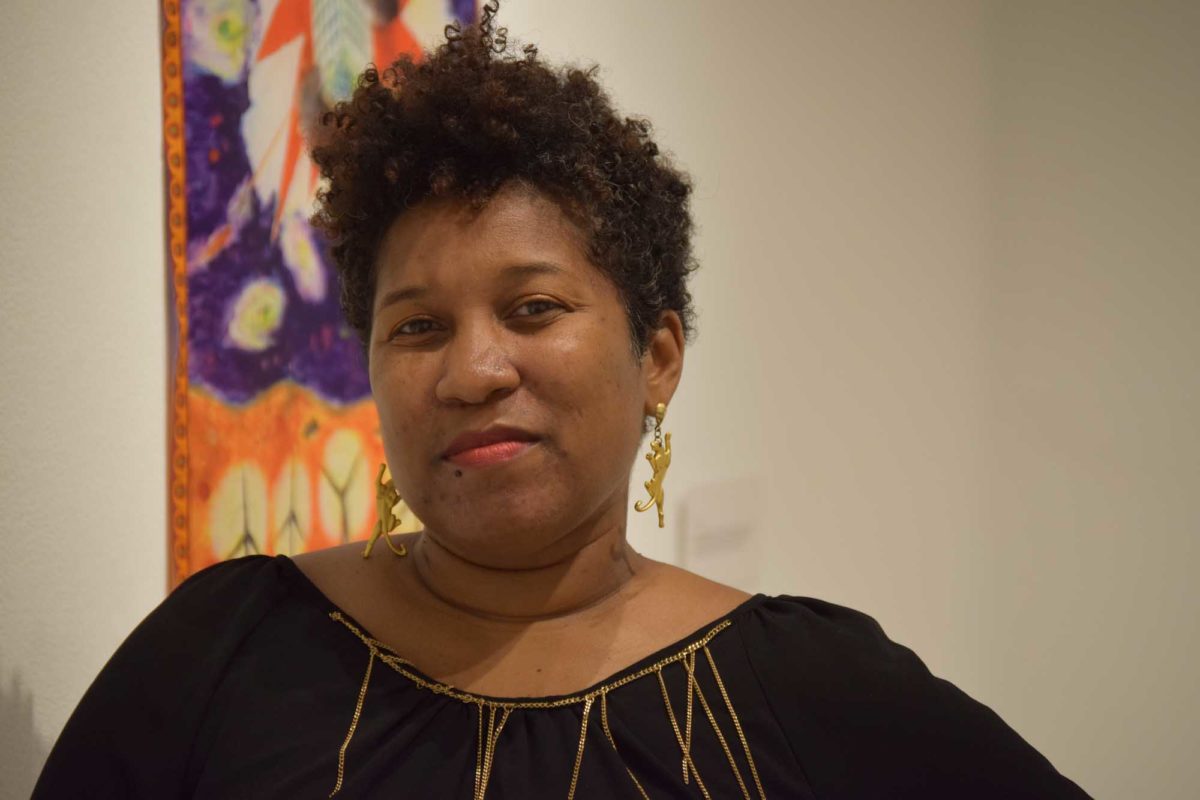 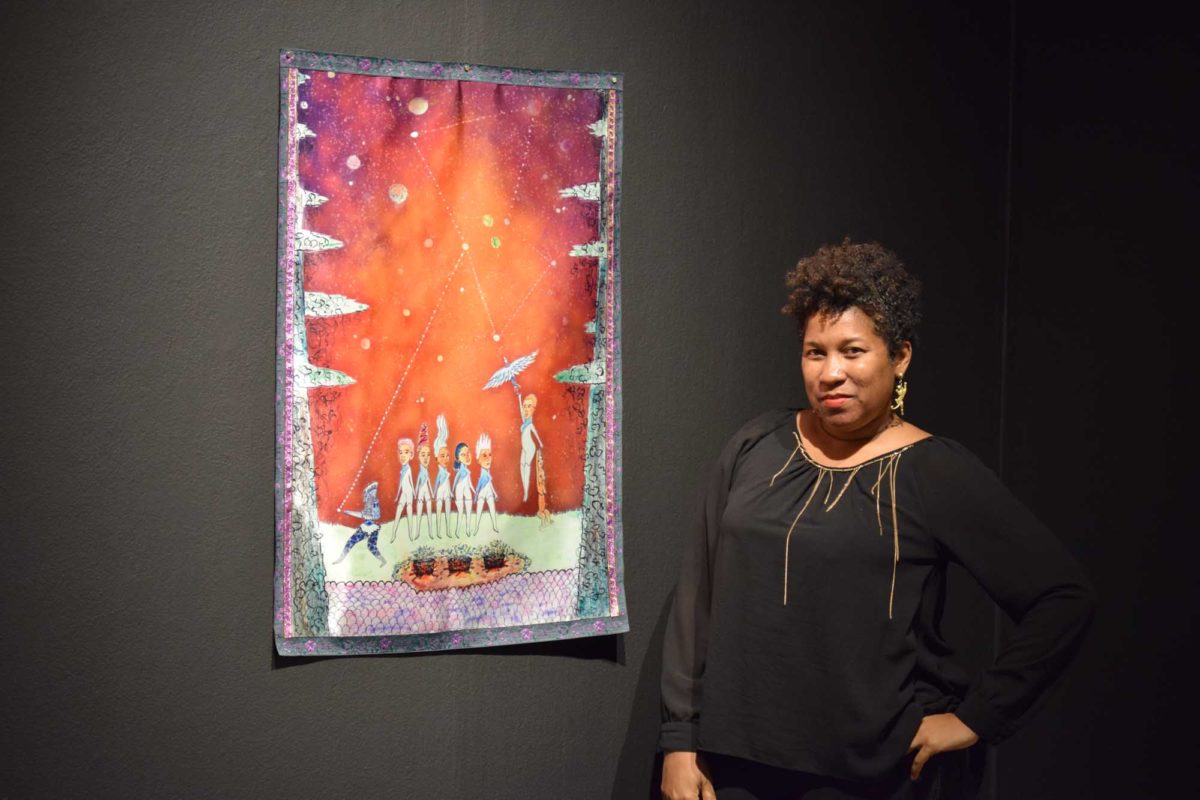 Years ago I’d catch a taxi to either the Greyhound or Trailways bus depot in downtown Norfolk, and after several hours and several stops (Newport News, Williamsburg, Richmond, etc.), we’d arrive in the heart of the nation’s capital. But the first stop out of Norfolk was always Hampton, a city I hadn’t thought about until this past week when I met with Zeal Harris in the El Camino College Art Gallery. Harris is one of five artists (with Mark Greenfield, Umar Rashid, Lezley Saar, and Frank J. Williams) featured in “Personal Truth,” a spare but engaging exhibition that has its reception tonight (Thursday) from 7 to 9 p.m.
Harris grew up in Hampton and attended Hampton University before attending Howard University in Washington, D.C., graduating from the latter in 1998 and then moving to L.A. in 2001. She earned her MFA from the Otis College of Art & Design in 2007 and has been making and showing art ever since.
In “Personal Truth,” Harris is exhibiting work, digitally printed paintings and drawings on silk panels, from two concurrent and ongoing series, “Bantus of the Black Atlantic” and “I Be Livin’ Black Love.” 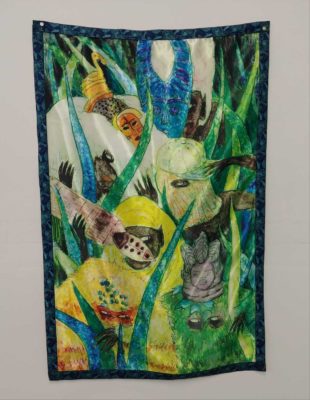 Magical realism
Harris was able to mull over how to proceed with these two series during a residency in Miami a couple of summers ago. The “Bantus of the Black Atlantic” project had been simmering in her mind for over ten years. “I haven’t really 100 percent settled on that as a title,” Harris admits with a big but pleasant laugh, “‘cause it kind of sounds like a college thesis.” It is, however, a fairly accurate description of what it’s about and where it’s going.
So, let’s get back to Hampton. Her great-grandmother, Harris says, journeyed south from around Richmond whereas much of the rest of the family headed north to Baltimore and New York City. Why Hampton? Harris asked her grandmother. Apparently because the racism wasn’t as bad as in some other places, but also because of the lure of a job at Bayshore Beach, “which was the premier attraction for African-Americans in the mid-Atlantic region at the time,” Harris says. “I think that more than 10,000 visitors came to the beach over the summer.”
Bayshore Beach, adjacent to Buckroe Beach, had its heyday from 1898 to 1933, but it declined in popularity and ceased to exist by the early 1970s. That’s why you’ll only see Buckroe on the map. Harris sought historic photographs of Bayshore, but found very few.
“When you’re an artist,” she says, “you sometimes need more visual information than the average person needs in order to have a real picture of what a place looks like.”
What Harris then concluded was that “if I’m gonna do this I’m going to have to make up a lot of stuff, or I’m going to have to look at some other historically black beaches to fill in some blanks. And that’s what I started doing.”
It was then that someone informed her about the Great Dismal Swamp.
“I was shocked to discover that I grew up 30 minutes from this place that was the largest, most long-standing place of marronage in the whole United States.” In other words, escaping from plantations and the like, runaway slaves sought refuge in the depths of this labyrinthine coastal jungle that’s in Virginia and part of North Carolina. 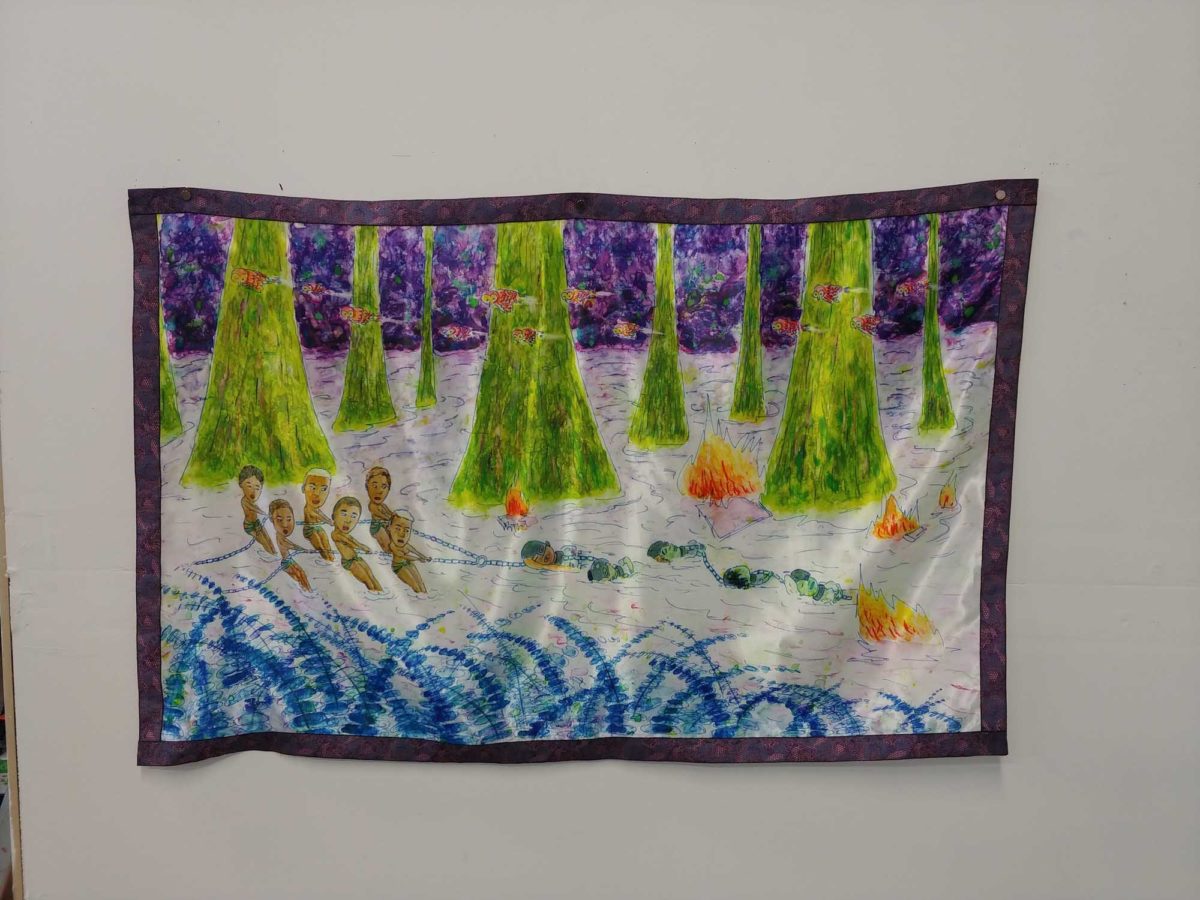 The Great Dismal Swamp is one of the key elements of “Bantus of the Black Atlantic.” This painted narrative, and one might describe its illustrations as cartoonish African-American folk art, with colorful and fluid forms, “tells a sort of magic-realist, Afro-futurist tale, a tale of migration and ethnogenesis; ethnogenesis meaning the beginning of African-American culture.
“Most of the pictures,” Harris continues, “have seven women, and I think of them as seven ancestral mothers who represent seven African powers, and you could also think of them as like witches in the forest. But they’re going to migrate through different spaces. I see this series as having five major locations.
“Right now,” she adds, and this is what we see in the gallery, “they’re in a sort of magical, mystical, non-linear space that is mostly situated in a swamp area. Then they’re going to move to something that’s more like woodlands, then something like 1920s urban Richmond, and then down into the beach. And then,” Harris says with another big laugh, “I don’t know. I guess I’ll have to take it someplace like Wakanda.”
The images are reminiscent of work by Marc Chagall and outsider artist Henry Darger, among others (influences include Faith Ringgold and Jacob Lawrence). They’re unworldly, with an airiness and buoyancy and a shimmering tonality. 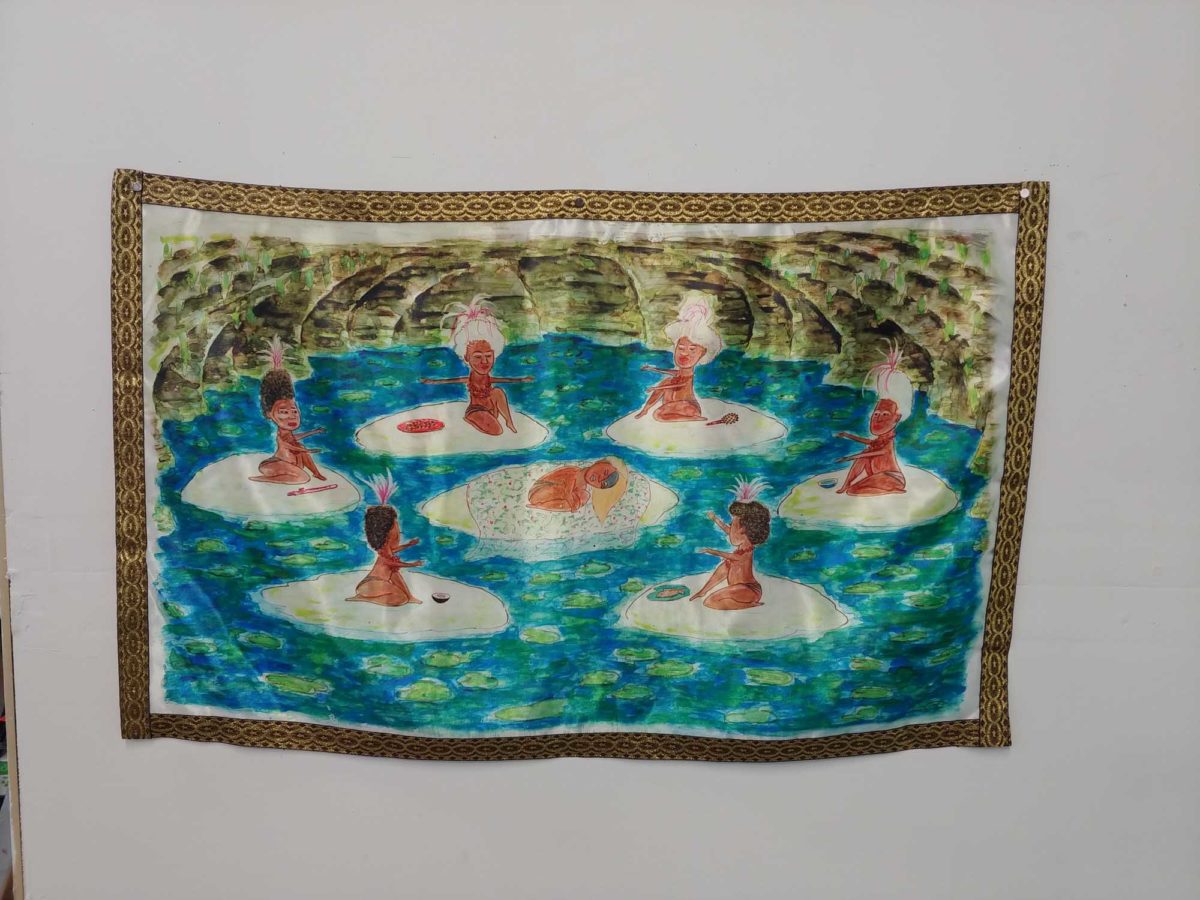 Double-standards
“The ‘Bantus of the Black Atlantic’ uses poetry and metaphor and analog to explore things that are more in the spiritual realm, while the ‘I Be Livin’ Black Love’ series is a way for me to organize the artwork and the commentary that I want to make, the trace, and the documentation that I’d like to leave of contemporary black American life,” Harris says. “It’s completely secular, and it’s meant to be read quickly, like jokes or political cartoons. It’s very loose in the way that I envision it, and covers things that have to do with dating and love and relationships through the eyes of myself and the anecdotal experiences of women around me.”
The “cartoon strip”-like illustrations are accompanied by urban vernacular language, and when Harris uses the word “signifyin’” what she’s indicating are “the ways of discovery, showing, and creating meaning that are distinctly African-American.”

The two series on view at El Camino were preceded by “Home Remedies for Driving While Black,” which was, Harris says, “the first time that I realized I need to organize my work a little bit more in a series-oriented way.” Each grouping has related themes or subject matter, and in short, “I make art to tell stories.
“The ‘Home Remedies for Driving While Black’ series really started with me wanting to do four pieces of artwork about people that I personally know who had been killed by police. All of them were unarmed at the time that they were killed. They all had very different personalities, very different looks, very different lifestyles. And still they met the same terrible fate.
“Before that,” Harris continues, referring not only to the killings of those she knew but also the media-reported police killings of those she didn’t, “no (negative) social issue coming out of black culture was pressing on my mind that same way, except Katrina.” The hurricane that bore down on New Orleans in 2005 disproportionately affected the city’s black inhabitants and for that reason, or so it seemed, the emergency response was slower to materialize.
“Every single time one of these news (items) came out about someone being killed or being acquitted, you almost felt like each person was your own private Katrina. Yeah, I had to make artwork about it. I didn’t make artwork about everyone, but I tried to focus on people that I knew rather than making iconographic images of someone who had died.” 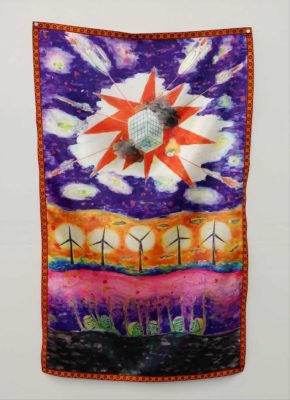 “The Ship,” by Zeal Harris (dye sublimation on charmeuse)

Theatrical undertones
In the course of our conversation the subjects ranged from Mahershala Ali in “Green Book” to the quilombos in Brazil and the plays of August Wilson. “I actually majored in theater studies at Howard University,” Harris says, and this opened up a new channel in our dialogue.
Well, there is a sort of theatrical feel to your pictures.
“That’s what people say,” Harris responds. “I just think of it as storytelling in general. With all of them together there is a narrative in a sense, which could be deemed theatrical.”
Although she didn’t pursue acting (“Technically I majored in theater production but ended up focusing on makeup art”), Harris preferred the camaraderie of theater students to that of other artists. Maybe that’s why the works she creates seem like scenes in a larger, ongoing sequence or chapter. So it’s not surprising to learn that she spent several years writing short stories. “You could call my artwork an example of being a frustrated writer,” she says with a laugh. And yet Harris has been able to successfully meld her knack for storytelling with her illustrative skills, and the effect is often mesmerizing and enchanting. That’s why we want to follow the thread and see where she goes with it. There’s quite an adventure ahead that’s slowly unfolding.
Personal Truths, curated by Susanna Meiers, has its artists reception this evening (Thursday) from 7 to 9 p.m. in the El Camino College Art Gallery, 16007 Crenshaw Blvd., Torrance. A gallery talk is set for Tuesday at 1 p.m. Through March 7. Call (310) 660-3010 or visit elcamino.edu. ER