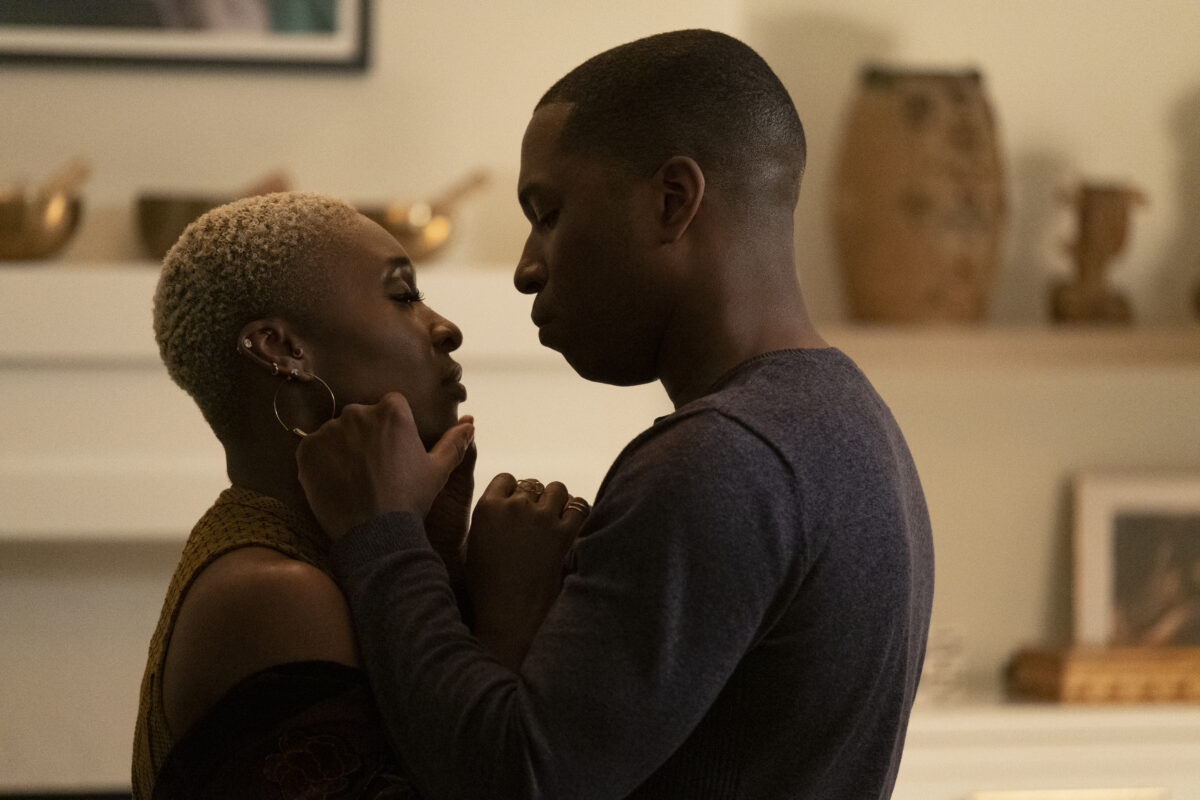 Cynthia Erivo as Janine Mikkelsen and Leslie Odom Jr. as Nick Mikkelsen in "Needle in a Timestack." Photo courtesy of Cate Cameron/Lionsgate

Cynthia Erivo as Janine Mikkelsen and Leslie Odom Jr. as Nick Mikkelsen in “Needle in a Timestack.” Photo courtesy of Cate Cameron/Lionsgate

“Happiness is the only thing more fleeting than time.” And so it is in the lives of Nick and Janine, soulmates in Oscar-winner John Ridley’s latest film “Needle in a Timestack.” Written and directed by Ridley, based on the short story by Robert Silverberg, our protagonists live in a near future that looks very much like today (or rather an upper middle class society filled with smart, professional, ethnically diverse individuals). Very much like the virtual reality games of today or the personal space travel offered by Bezos or Branson, time travel vacations are available to those with the means to pay for it. Figuratively speaking, vacationers are allowed to go back to a previous era or event where they can look but not touch. Any interference, intentional or not, can result in a blip in your own timeline or that of someone tangential to the past experience who may or may not be part of that person’s present. This results in a slight shift in the present and can be felt like a fleeting, barely perceptible earthquake.

Ridley uses time metaphorically both as a theme and an action. Nick and Janine are very much in love but time shifts are beginning to intrude on them. Little memories are fading, subtle changes to their environment occur; their dog becomes a cat, his blue shirt is suddenly yellow, something noticed by Nick but not Janine. Nick is very concerned as these phases become more and more noticeable that something nefarious lurks behind them. What he suspects, and Janine confirms, is that they are being deliberately caused by Janine’s ex-husband and Nick’s former friend, the fabulously wealthy Tommy. He has made it clear that losing Janine was the worst mistake of his life and getting her back is the only thing that matters to him. 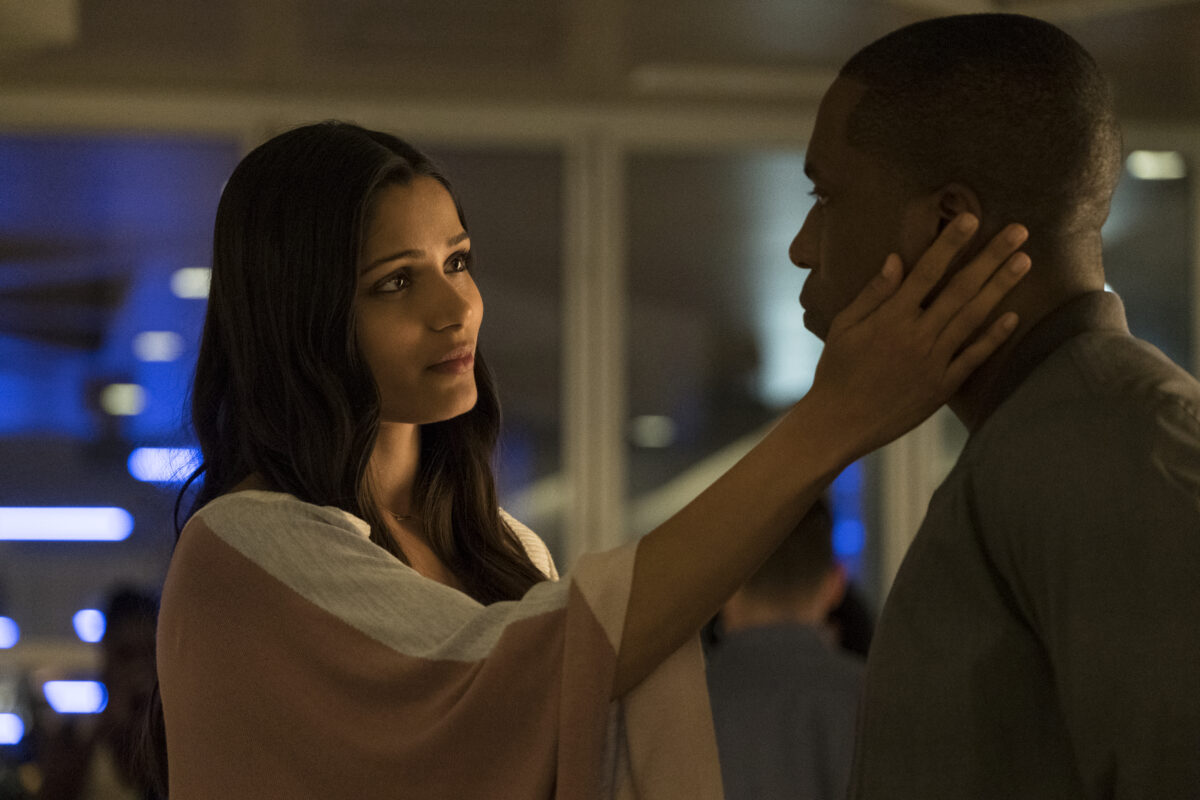 Freida Pinto as Alex Leslie and Leslie Odom Jr. as Nick Mikkelsen in “Needle in a Timestack.” Photo courtesy of Cate Cameron/Lionsgate

Feeling the constantly shifting timeframe, Nick asks Janine if, in some other time or place, they were strangers, would she recognize him as the love of her life. He would, he tells her. And then his worst case scenario occurs and a time shift separates them irrevocably.

“Needle in a Timestack” is that most immersive, subtle form of science fiction that even someone as averse to the genre as I am can float on its subtle cloud of time travel. At its core it is a love story; not one of love conquers all but one of love transcends all. Broken into three separate chapters, all a consequence of the original time/phase shift, we follow Nick for whom (and tangentially everyone else) the time shift is a cause and effect of the choices that are made both for him and by him. Ridley has taken as a theme that the past is what brings us to where we need to be. The present is constantly shifting as he tells us that yesterday is not yesterday and today is not today, all in service of a marvelous love story. 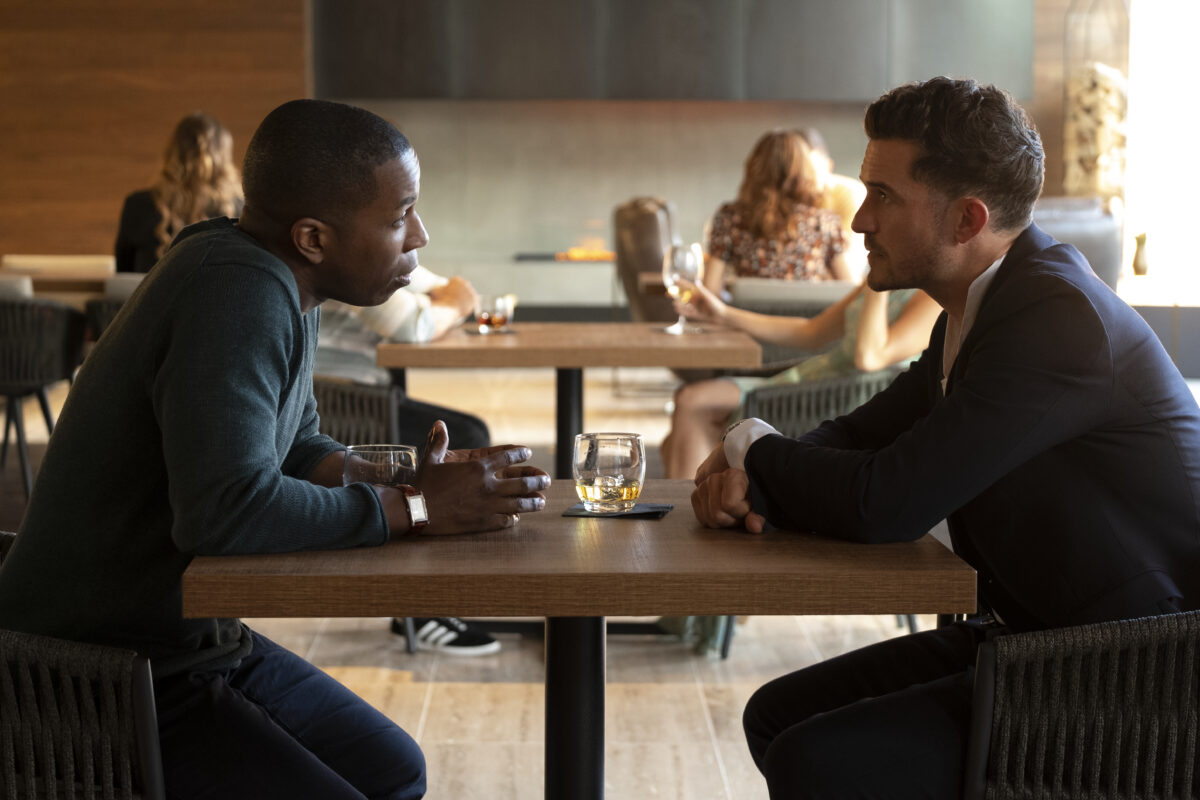 Leslie Odom Jr. as Nick Mikkelsen and Orlando Bloom as Tommy Hambleton in “Needle in a Timestack.” Photo courtesy of Cate Cameron/Lionsgate

It is difficult to convey how sweepingly romantic “Needle in a Timestack” is (an unfortunate title that might have been better expressed as “Time before Time”). The brilliantly diverse and talented cast helps carry across the fuzzy logic of the time travel aspects of “love will out.” Led by Leslie Odom Jr., Nick, who rose to fame as Aaron Burr in Hamilton, he is handsome charismatic, sympathetic and earns all of our sympathy. Cynthia Erivo, another theater star (The Color Purple) is Odom’s perfect match in Janine. Their chemistry is palpable, infused with mutual respect and warmth. Freida Pinto (“Slumdog Millionaire) is beautiful and conveys loss heartbreakingly. Perhaps the most difficult role is that of Orlando Bloom’s Tommy because by turns he is villainous and vulnerable and ultimately sympathetic. Jadyn Wong as Nick’s sister is less convincing but only because, unlike the other characters, hers is a rather gratuitous role that doesn’t really propel the action in any direction.

Remarkably, this romantic film of “what ifs” depends primarily on the audience’s belief in the characters and their actions rather than a suspension of belief that time travel would necessitate. After all, at the root of all of this is that first question Nick and Janine ask of each other – would they recognize their true love even if they were meeting again for the first time. Would you?

Opening Friday October 15 at the Laemmle Noho 7, On Demand and Digital Platforms.