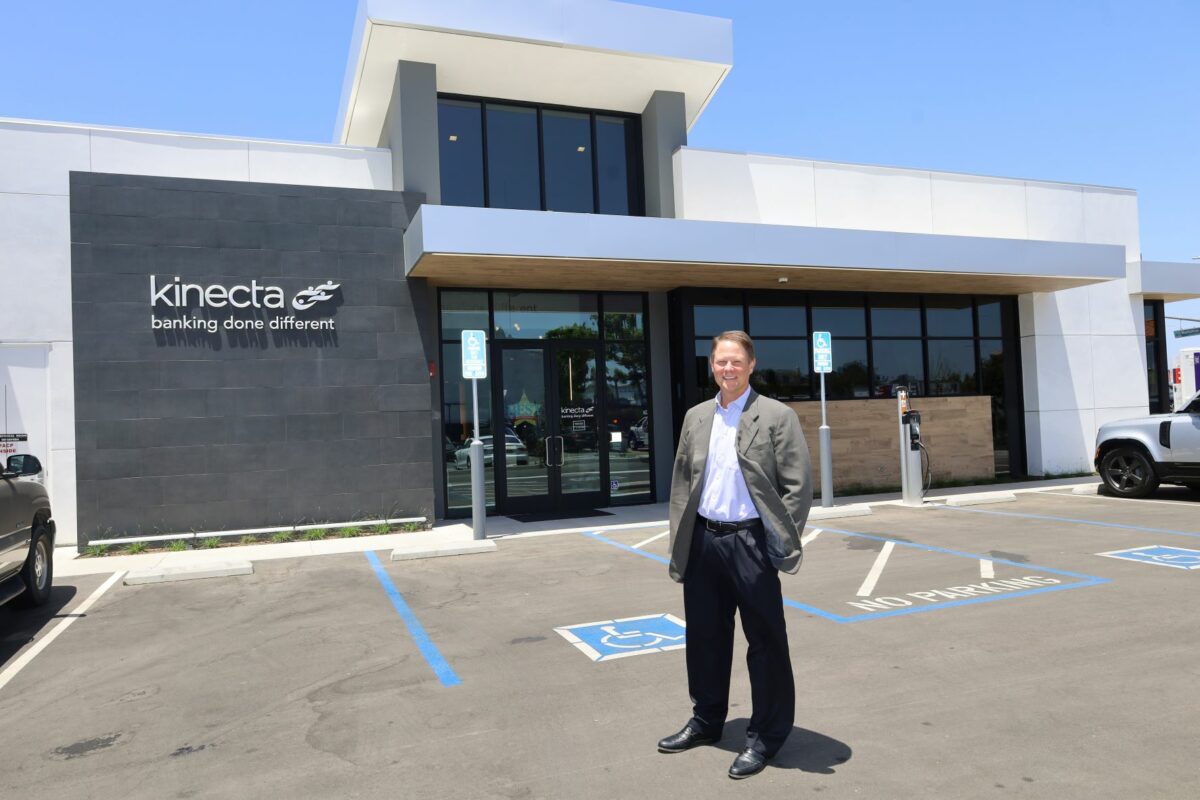 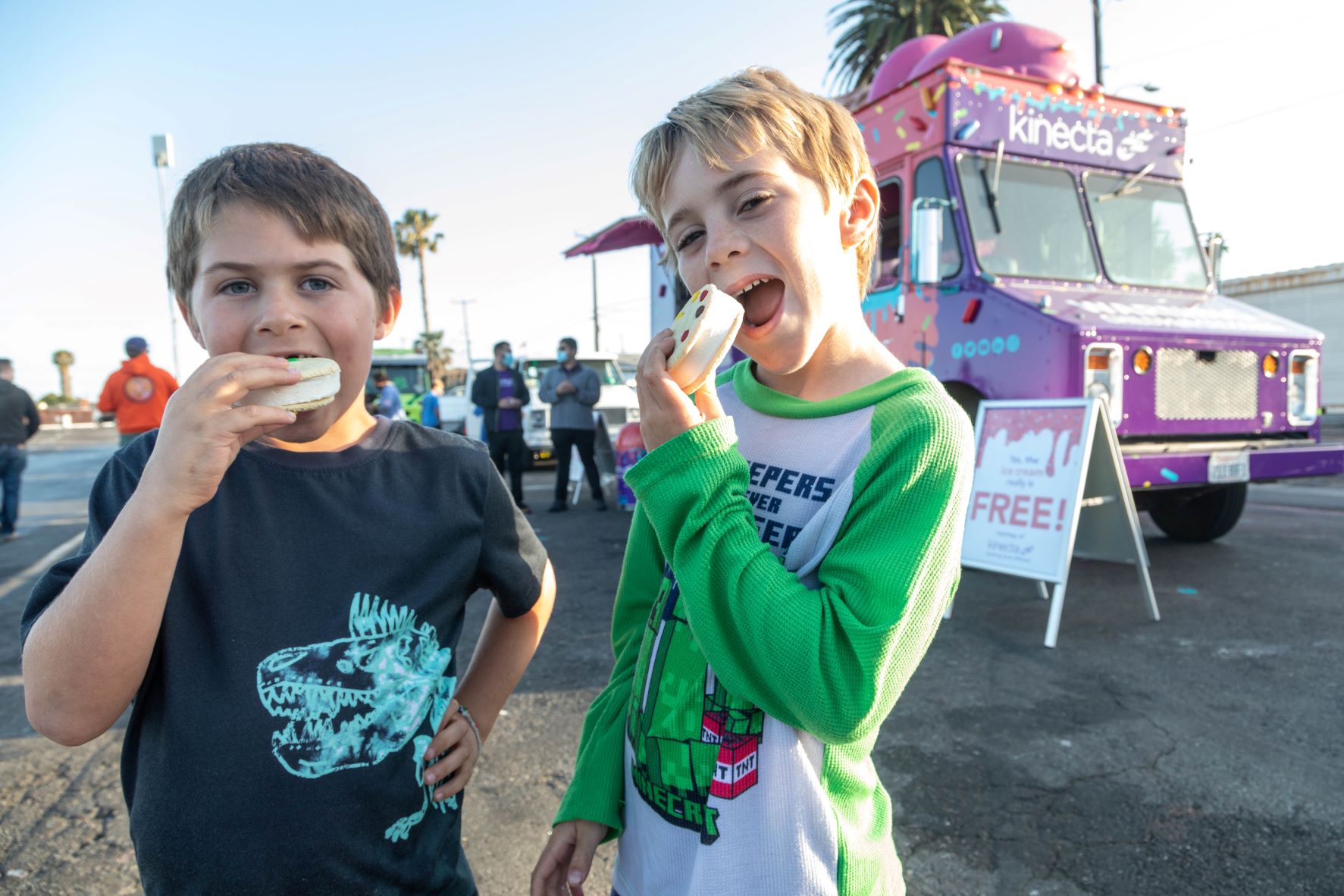 Travis and Riley Levy enjoying Kinecta ice cream sandwiches at the South Bay Boardriders Night at the Drive-in in 2021. SBBC is one of many local organizations Kinecta helps support. Photo by Steve Gaffney

The word Kinecta appeared on Redondo Police chief Keith Kauffman’s skate helmet at the 2017 King Harbor Skateboard Championships. It appears regularly on pop-ups at South Bay Boardrider and Jimmy Miller Foundation surf contests. It appears on team T-shirts at the Skechers Friendship Walk and the Tour de Pier. It’s on checks totalling nearly $1 million annually to nonprofits, such as the Richstone Family Center and Beach City education foundations. Most famously, Kinecta is on the ice cream truck that gives out ice cream bars at just about every community event in the South Bay. 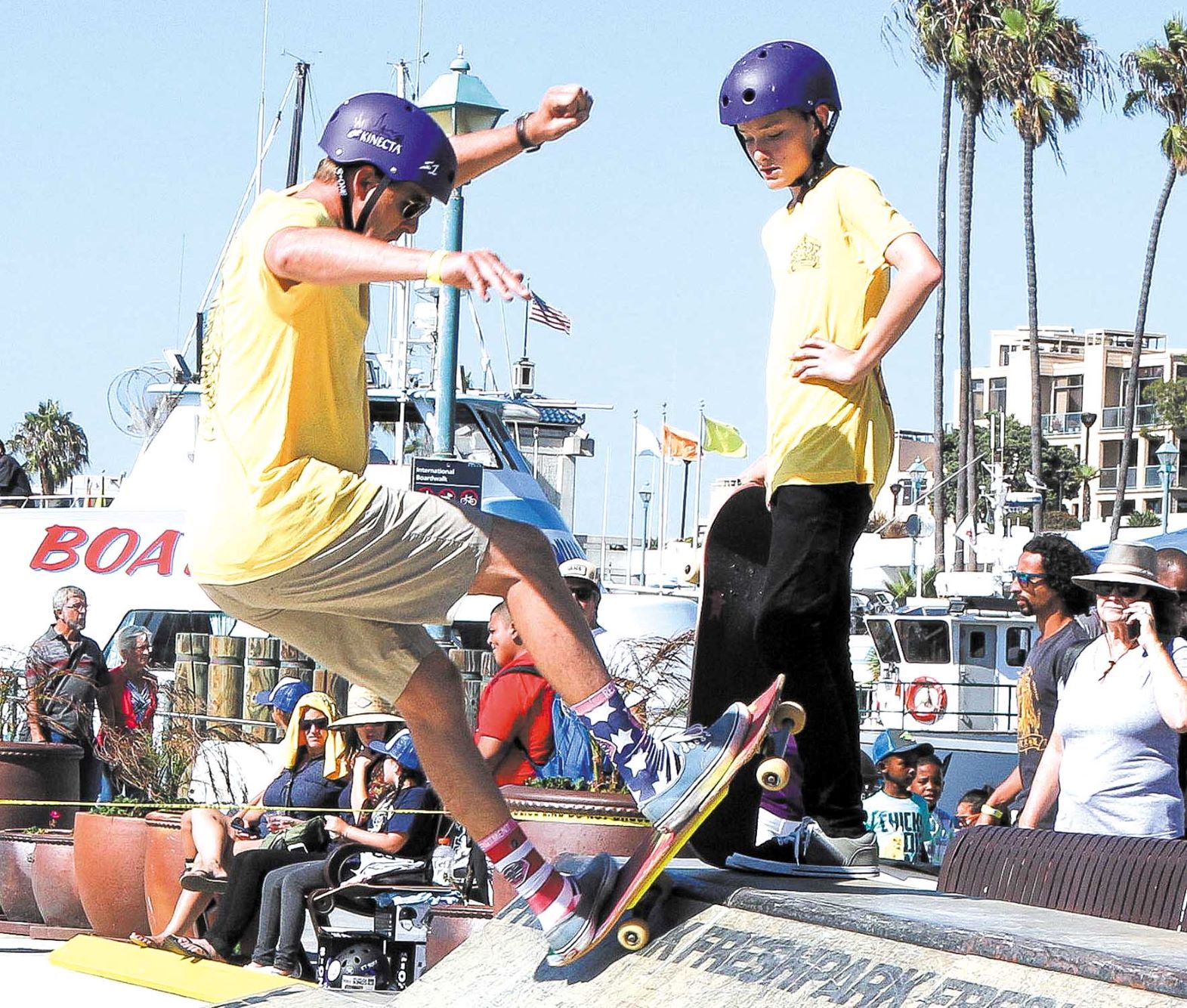 Federal Credit Union President Keith Sultemeier takes personal credit for the smoker, which he brought from his native Texas after being recruited by Manhattan Beach-based Kinecta Federal Credit Union. Ten years later, he admitted, he’s still adjusting to the change.

But the pervasive community presence is not just about branding, Sultemeier explained. It’s also meant to educate residents about the similarities and differences between credit unions and banks, beginning with the fact that anyone can join Kinecta with a $5 deposit.

“Our services are the same as banks, but our charters are very different,” Sultemeier said.

“We are a ‘not-for-profit.’ As a result, we’re not beholden to shareholders. Our ‘shareholders’ are our customers. Our concern is customer return, which is paid out through lower loan rates and higher interest on deposits.”

The not-for-profit structure has its drawbacks, from a business point of view..

“We can’t raise capital by issuing stock,” he said. “We rely on net earnings to raise capital, so expansion takes place more slowly.”

“Also, unlike banks, which can open branches anywhere they wish, credit unions must demonstrate a community need to receive approval from federal regulators.”

Kinecta has 32 branches in California, New York and New Jersey, including 10 in the South Bay.

It’s opening another branch in Watts this year, and one in Inglewood next year.

“Banks won’t go there because they can’t make the returns demanded by stockholders and analysts. Our definition of success is different. We’re not trying to maximize profits. Our goal is to build financial security in the communities we serve,” Sultemeier said.

Part of a credit union’s appeal to customers, he said, is, “Money we bring in goes back to work in the community, rather than to stockholders.”

An example in the Beach Cities, he said, is home loans. Kinecta offersconstruction loans that convert into long term mortgage loans, at mortgage loan rates, without the need to pay for a second loan.

New to Kinecta’s services is the new branch’s offering of private banking, or wealth management.

“I think the lending rate increases will slow home price increases. But despite the rate increases, the constraint on inventory will keep prices rising,” he said.

He did say he worries raising loan rates will bring on a “hopefully mild recession.”

His view on commercial real estate was less positive, based on personal experience.

“We let our employees work remotely, or hybrid (in office, and at home). I’m not sure five years from now people will still want to work from home. I prefer to work in an office. But I can see the attraction of home offices in Southern California because of the commutes.”

“I’m hopeful our employees will choose to come back to the office, at least a few days a week,” he said. To encourage that, Kinecta issues gas cards to employees with long commutes.

Meanwhile, Kinecta is leasing out three of five floors formerly occupied by employees at its Rosecrans Avenue headquarters in Manhattan Beach.

Sultemeier became interested in the new branch’s long vacant location at Sepulveda and Manhattan Beach boulevards about four years ago.

“I kept driving by this ugly green fence surrounding the property, and saw this as a chance for Kinecta to become part of the solution,” he said

In 2008, Manhattan Beach approved a 13,000 square-foot Rite Aid pharmacy for the site, formerly occupied by a gas station, and a three-story office and retail building. Despite paying over $500,000 a year in rent, according to one of the two property owners, Rite Aid abandoned plans to develop the site. In 2015, then mayor Wayne Powell threatened to have the property declared a “public nuisance.”

“It’s a blight on our community. The residents deserve much better,” Powell said at the time.

The new flagship branch, with its delta-shaped roof, and wing-shaped profile, was designed by Manhattan Beach architect Louie Tomaro, who is best known for light-filled, luxury beach homes. Like the name Kinecta, derived from kinetic energy, the design is meant to evoke Kinecta’s origins as the Hughes Aircraft Employees Credit Union, founded 80 years ago.

The flagship  branch opened May 9. The grand opening is planned for Wednesday, July 15, by which time, supply chain permitting, the neighboring Ike’s Love and Sandwiches, Dunkin,’ and a veterinary clinic will also be open. ER