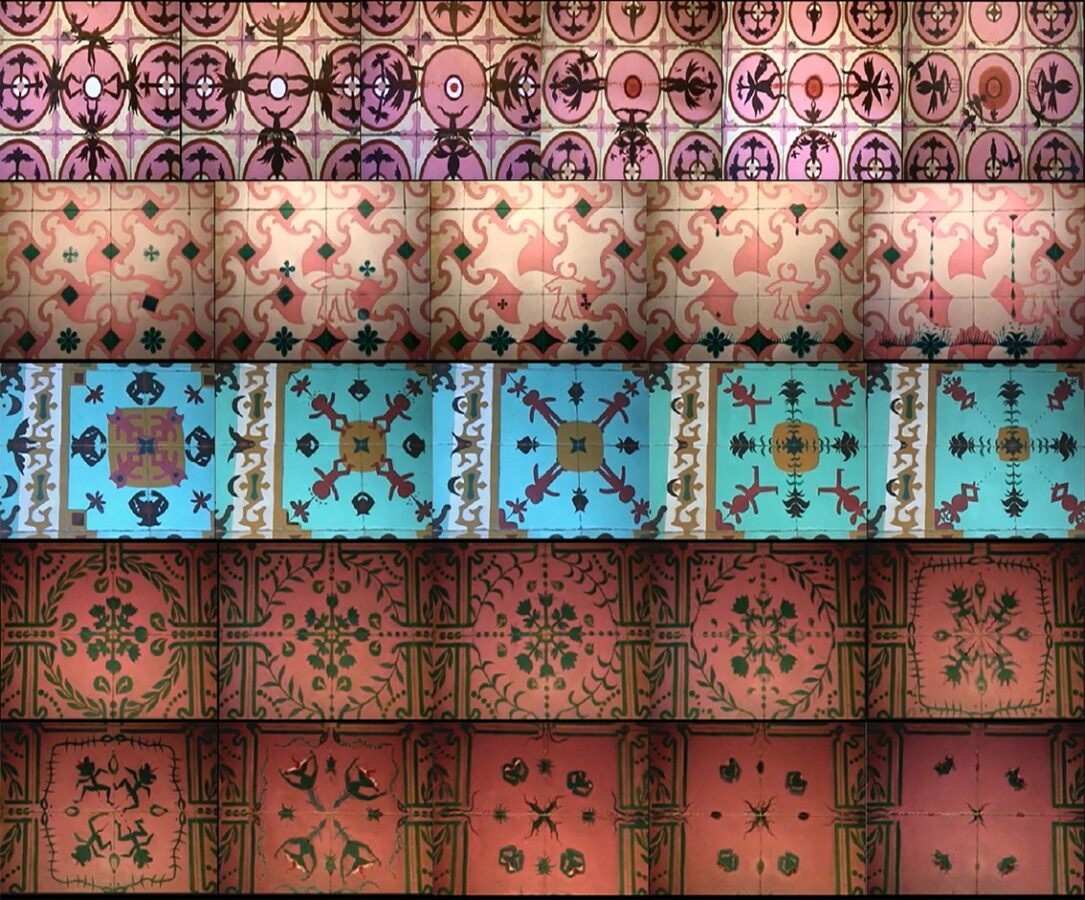 While many people may still be looking at Cuba through a filter of Fidel Castro and Che Guevara, mixed in with the photographs of Walker Evans and the stories of Ernest Hemingway, with perhaps a dash of the Buena Vista Social Club as well, the island nation’s young artists are exploring and interacting with the world in ways that should astonish those of us who take the time to look closer.

Which brings us to “Hope,” an exhibition of video and new media art that is on view through Jan. 28 at ESMoA in El Segundo. The main gallery has been darkened and close to 20 screens and monitors have been spaced throughout, allowing the viewer ample room and opportunity to watch and contemplate each film, which range from about 30 seconds to 30 minutes.

Frankly, it’s not an easy show to digest, Without making an effort to discover and absorb the context of each film and its place in recent Cuban media art, visitors will resort to mere sampling and may likely walk out unsatisfied. 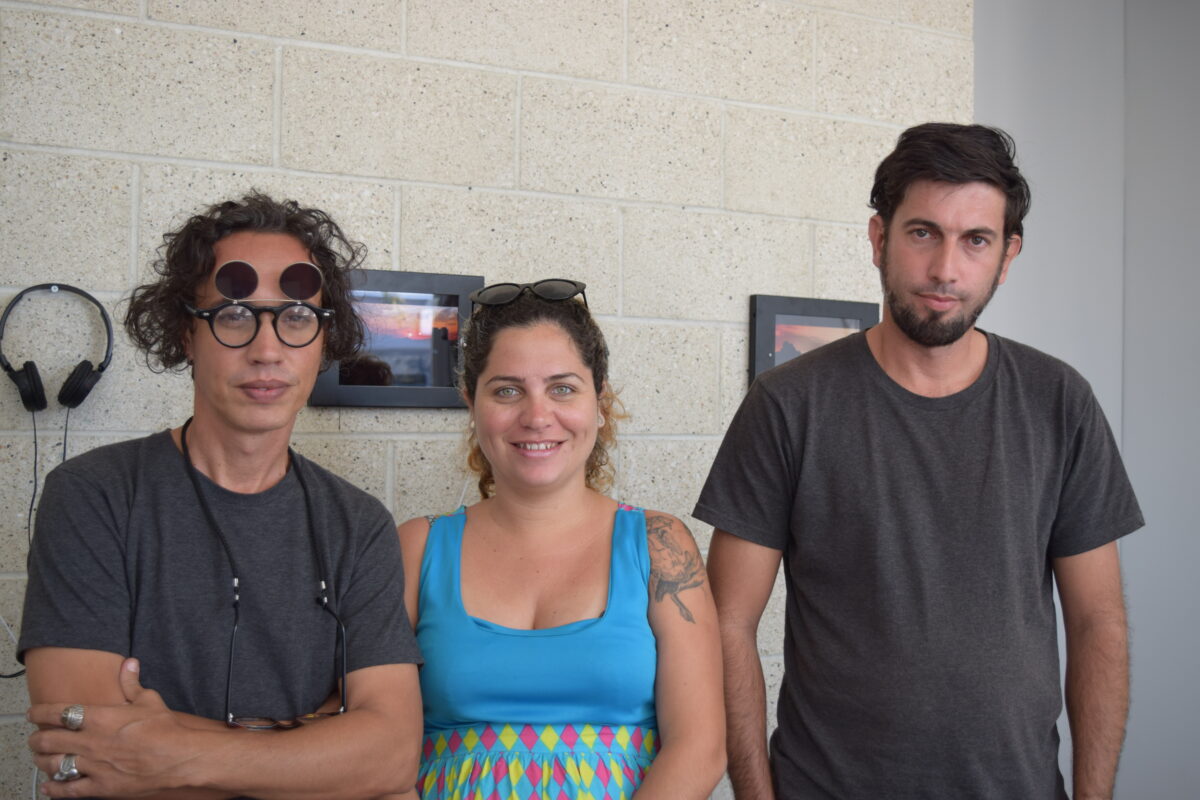 But “Hope” (with a nod to early Obama-era optimism) is a serious and perhaps even a profound exhibition. Frency Fernandez, who goes by the appellation “frency,” sat down recently to speak about the show, what it means, and how it came together. We were joined by a few others, including Ley MA, frency’s unofficial co-curator, and artist Fidel García. But frency did 99 percent of the talking.

In 2011, frency and other Cuban artists presented an exhibition in Dortmund, Germany, that focused on visual media art from Cuba. Two years ago, ESMoA’s chief curator, Bernhard Zuenkeler, proposed that a version of the show be mounted in El Segundo (and it dovetails nicely with the Getty-driven “Pacific Standard Time: LA/LA”).

Frency, curator of “Hope” at ESMoA. Photo by Bondo Wyszpolski

Frency agreed, but wanted to emphasize the term “new media art” rather than simply video art or even emerging media. That’s because new media art is a large enough umbrella to shelter recent advances in technology that go well beyond the traditional methods of filmmaking. New tools for editing, designing, programming, etc., are constantly opening new possibilities for those wanting to express their artistic vision.

Regarding Cuba, frency points out that “We are talking about a semi-connected society; two years ago it was a non-connected society.” The internet took its time coming to Cuba. “Now we are talking about a digital world,” he adds, referring to celluloid and tape, two materials on the endangered species list. Cuba may have been late getting to the table, but frency compares the current dynamic in video art to a tsunami.

“Hope” doesn’t only feature work from the last two or three years. “We have included several artists that have been very important for us in our research,” and one such piece is “Cosmorama” (1963-64) by Enrique Pîneda Barnet and Sandú Darié. The latter is a Romanian-Cuban artist and a pioneer in Cuba of concrete and kinetic art. The film, in an intimate “theater” inset from the other video stations, is something of an acid trip of colors and shapes.

Frency also emphasizes that there are several levels to the exhibition, that is, “four ways of expression that in general configure contemporary Cuban art since the ‘80s.” There’s the anthropological perception (“meditating about ourselves as human beings”) and the sociological perception. There’s the political angle, not surprisingly: “Contemporary Cuban art has mostly been very critical (regarding) our circumstances within our (political) system.”

The fourth level is metaphoric, which is something that artists in countries with repressive regimes have resorted to in order to sidestep censorship and even jail time. Many of the novels from the “boom” period (the 1960s) of Latin American literature fell under the heading of “magic realism” in part as a way to foil the censor but still obliquely address crucial issues of political freedom and human rights.

For an audience in Los Angeles, metaphoric videos will likely sail right over our heads. But sometimes one can make the connection without too much prodding. For example, Fidel García’s “Resocialización” (2017), which looks like footage from a security camera that has been trained on an encampment of homeless people on Skid Row, is a work that, according to frency, reflects on matters of surveillance and control. About which Cubans would have some strong opinions.

The artists in “Hope” not only hail from Havana but also other parts of Cuba, as well as outside the country and in such cities as Barcelona, Miami, Los Angeles, and Chicago. Frency’s scope is clearly not limited to just one region or another. He’s cast a wide net.

Ley MA curated a show of new media artists earlier this year in Cuba, and some of those artists are in the ESMoA exhibition. Selecting which artists to feature wasn’t easy. As frency puts it, “It’s a complicated process that really doesn’t have a rule or a book to follow. It’s an adventure all the time.”

Also, with a show like this one, special attention must be paid to the physical space, how to create an internal narrative, and where there’s sound involved making sure it’s balanced just right. Headphones are placed near most of the videos, which limits how many people can fully engage with each piece at the same time. A problem noticed by this writer was that a dominant “soundtrack” filled the gallery, which made it extremely difficult to focus on the words or music of any one specific film.

One curious work, which at first glance looks like a gold-colored statue of Fidel Castro on a rotating platform, set high up in the gallery, is actually a 3D video by Yadniel Padrón entitled “All pay” (2006). It’s actually Castro depicted as an Oscar statuette and is described as “an iconic expression about leadership, iconic power, and everlasting presence.”

Well, as pop icons, the U.S. has had Elvis Presley and Andy Warhol, but for Cubans it was, again, Che Guevara and Fidel Castro, elevated almost as religious figures. This leads frency to a discussion of syncretism, where lip service is paid to one religion while quietly following another. It’s a way of being subversive without putting one’s neck on the line.

Repression has often led to witty, inventive art, and one example in “Hope” is Jorge and Larry’s “Basic Cuban History for Fashionistas, Vol. III” (2014). “Using footage of the fashion world, the artists have created a parody of some of the most important moments of the Cuban revolution history.” 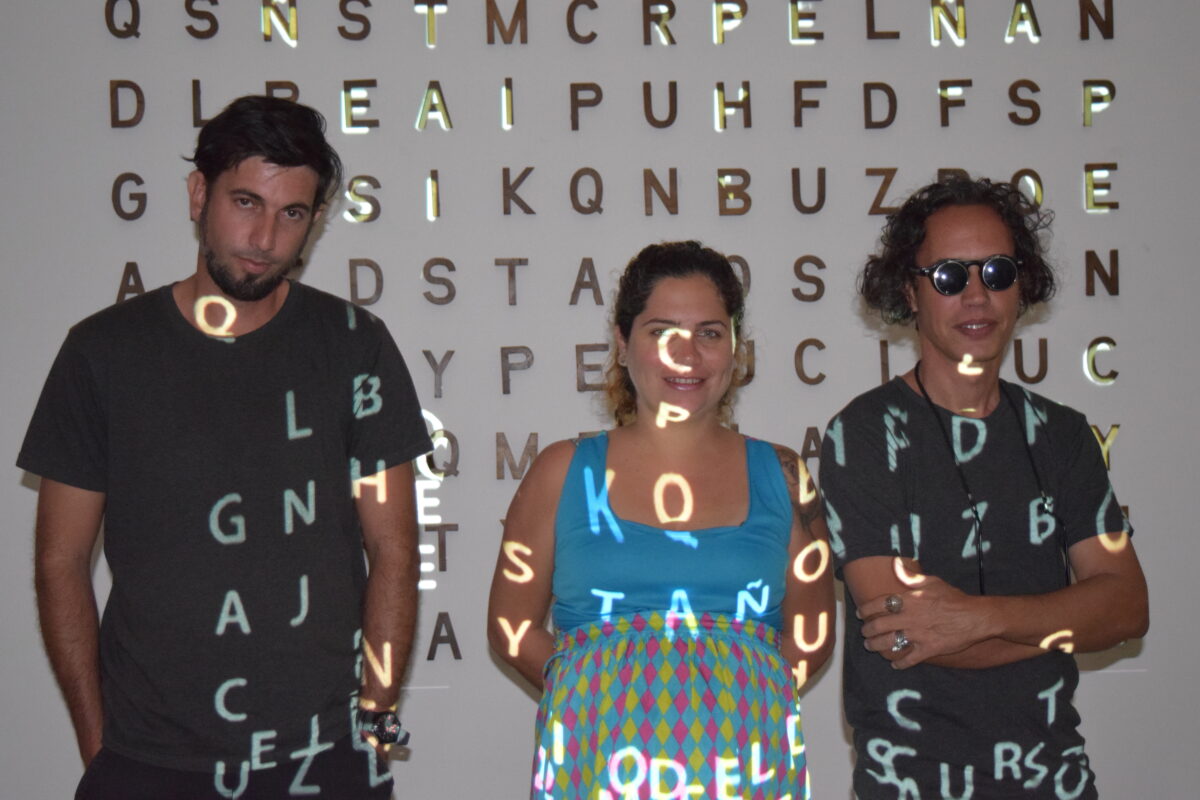 Another piece, by David Beltrán, from the series “Smoke Signals” (2014-present), “is a metaphor of the unconnected or semi-unconnected society that is Cuba due to the control of the communications by the Cuban government.”

Also, presumably political but amusing in its own way, is Levi Orta’s “Singing Alone” (2014), which is a montage of YouTube video clips showing world leaders caught in the act of singing. It’s not doctored, but tightly strung together, and thus we can watch Vladimir Putin, Bill Clinton, Barack Obama, Hugo Chávez, Raúl Castro, Silvio Berlusconi, Rafael Correa, Nicolás Maduro, and Evo Morales in their lighter moments.