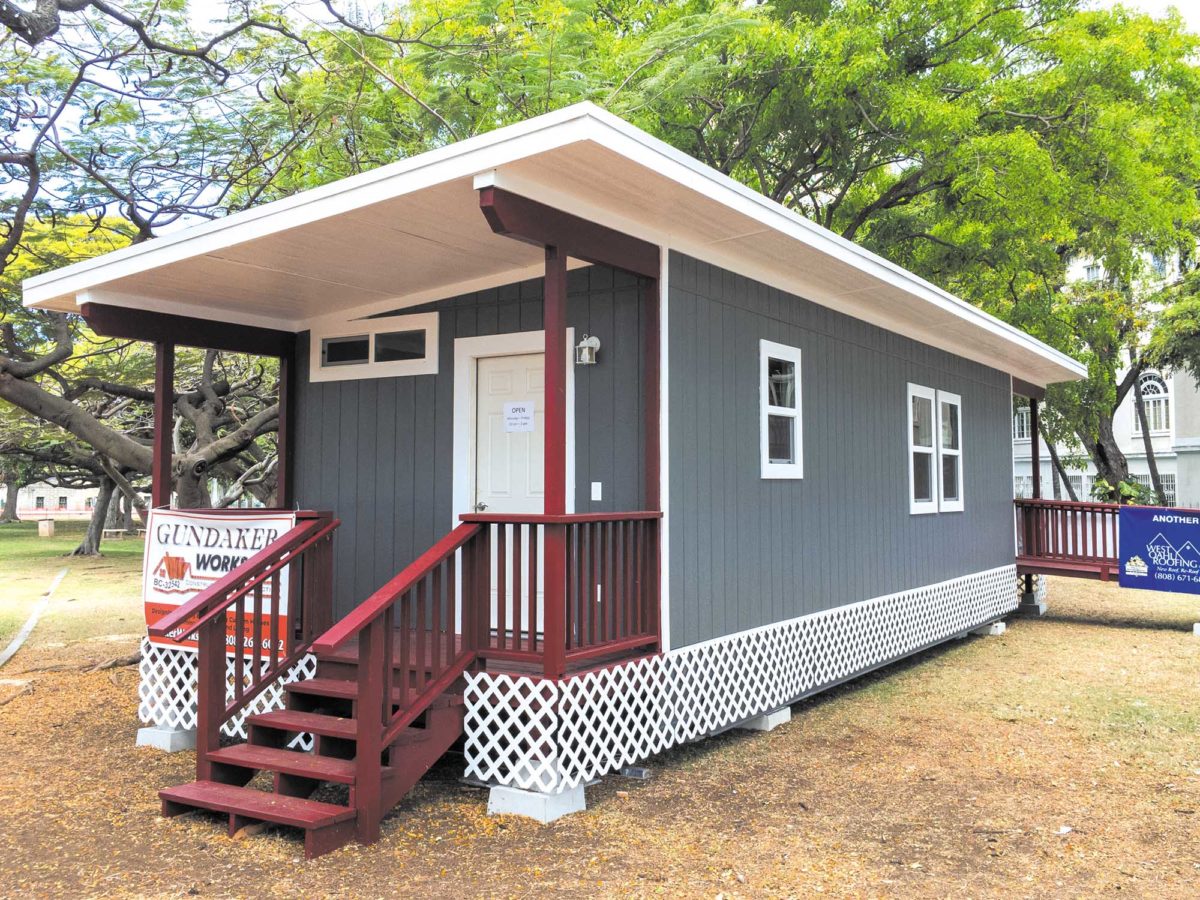 A sample of a prefabricated accessory dwelling unit in Hawaii. Photo by Daniel Ramirez

Less than 18 months after modifying its local rules to accommodate accessory dwelling units, known as ADUs or “granny flats,” Hermosa Beach is at it again, after its previous fixes became inconsistent with state laws taking effect Jan. 1.

Last month, Hermosa’s Planning Commission recommended a draft ordinance be forwarded on to the City Council, and it is tentatively scheduled to be considered at the council’s Jan. 14 meeting. The ordinance is considerably more permissive than Hermosa’s previous attempt, which commissioners made clear was less a matter of excitement about the prospect of more ADUs than a sense of Sacramento tying the city’s hands. Default rules drafted by the state automatically go into effect on Jan. 1 for any city that has not updated its laws, and will remain in effect in Hermosa until the council votes to approve a new ordinance.

“We object to a heavy-handed state takeover of what has always been in the state of California a local land-use decision,” said Commissioner Pete Hoffman. “Having said that, we have no jurisdiction over this.”

Hermosa is one of many cities throughout the state obligated to fix its ADU rules as California attempts to address what business owners, economists, and legislators describe as a profound housing crisis. Along with having approximately a quarter of the nation’s people experiencing homelessness, one-third of California’s tenants spend more than half their income on rent each month, and the median home value in many of the state’s metropolitan areas is out of reach for historically high percentages of the population.

The changes to ADU regulations are part of a slew of bills from Sacramento that are attempting to address the housing crisis by boosting supply. Starting in 2016, the legislature began passing bills that forced cities to change their rules on ADUs, after finding that many cities across the state had made them difficult or impossible to build; for example, an ordinance Hermosa passed decades ago limited ADUs to lots greater than 8,000 square feet, of which there are almost none in the city. Housing advocates argue that accessory dwelling units, which can be either carved out of existing structures or erected on undeveloped lot space like a back yard, are a quick and relatively inexpensive way to increase the number of available units, especially in built-out areas.

But in the Beach Cities and elsewhere, they have prompted resentment about Sacramento invading local land use authority.

“This obliterates our unique character, our neighborhood character, and the goals that we set out so carefully,” in PLAN Hermosa, said Commissioner Marie Rice, referring to the city’s updated General Plan, approved in 2017.

The changes that went into effect Jan. 1 significantly expand the number of parcels in the city eligible to house ADUs. The rules Hermosa’s City Council approved in July 2018 require that ADUs be on residentially zoned land containing only a single-family home, and on lots of least 4,000 square feet. While 4,000 square feet is the minimum lot size under current city code for the construction of new homes, many of the city’s homes — built before that law went into effect — are on far smaller lots. As a result, fewer than half of Hermosa’s parcels were eligible to host an ADU. The new state regulations prohibit cities from imposing lot size minimums, and also eliminate the residential and single-family zoning provisions.

Although Hermosa’s rules passed the City Council with a 4-1 majority, its shortcomings were apparent even before the most recent state bills became law. At a September 2019 meeting of the California Coastal Commission, at which a project involving a home in Hermosa that had unsuccessfully sought an accessory dwelling unit was seeking a permit, several commissioners lambasted Hermosa’s ordinance.

“I find it unnecessarily prohibitive. It’s shortsighted. It flies in the face of state law, and frankly is limiting what residents might want to do to support their family or themselves,” said Commissioner Katie Rice.

Parking provides the clearest tension between Hermosa’s goals and those of the state. Because providing a parking space dramatically increases the cost and difficulty of building housing, state laws have attempted to limit the parking requirements that cities can impose on accessory dwelling units. A law passed in 2017 prohibited parking requirements for ADUs within a half-mile of public transit. While public transit use in Hermosa is low, several bus routes run through it, and the half-mile radius was enough to encircle every parcel in the city. Seeking to comply with the state law, Hermosa staff presented planning commissioners with a draft ordinance in spring 2018 in which no eligible ADU in the city would be required to provide parking. Commissioners, fearing that this would exacerbate existing parking struggles, asked for tweaks in the definition of the term “public transit.” The resulting changes, adopted by the City Council, meant that, instead of no ADU being required to provide parking, all of them would.

Asked about the change at the time by the Easy Reader, a state housing official said the changes skirted the intent of the legislature. A representative from the office of state Senator Richard Bloom told of the change promised that legislative fixes were in the works to address such legal maneuvering. Bloom is the author of Assembly Bill 881, which went into effect Jan. 1 and, along with ending lot size minimums, defines public transit in a way that makes Hermosa’s previous parking requirements impossible.

The fear of Hermosa being deluged with granny flats have so far not come to pass. Since Jan. 1, 2018, when the previous round of ADU bills went into effect, Hermosa has received 15 applications to build the units, Community Development Director Ken Robertson told the Planning Commission. And while the new law does make them easier to build, the development opportunities it creates may not be desirable for the property owners.

“One of the things we can’t predict, and we’re getting some guesses from the building community, is how many people will really take advantage of this,” Robertson said. “This will broaden the opportunity. But a lot of these are on small lots, in which people may not be interested in having more people on the property.”

In the event that more property owners are interested, Robertson implied that the more liberal ADU regulations could help Hermosa meet another state housing mandate: its allocation under the Regional Housing Needs Assessment, or RHNA, a process in which cities are asked to plan for growth. Hermosa had to zone for just two new units between 2013 and 2021 but, under figures released in November, will have to plan for 566 units for the coming eight-year cycle. That process featured some of the same tension between density and “community character” that undergirds the ADU disagreement, and many cities along with Hermosa received unexpectedly large allocations. While Hermosa is already relatively dense — it is the third-densest city in the broader South Bay, behind Lawndale and Hawthorne — the panel of Southern California elected officials that sets the RHNA numbers agreed, by a surprisingly lopsided margin, to accommodate population growth in places that are already built out, rather than encouraging sprawl into undeveloped areas.

“Every community in our region must build new and more affordable housing — and putting it near jobs and transit will help ensure that more people have the opportunities they deserve,” Los Angeles Mayor Eric Garcetti said in a statement.