Nine deaths in the Beach Cities from COVID-19 so far 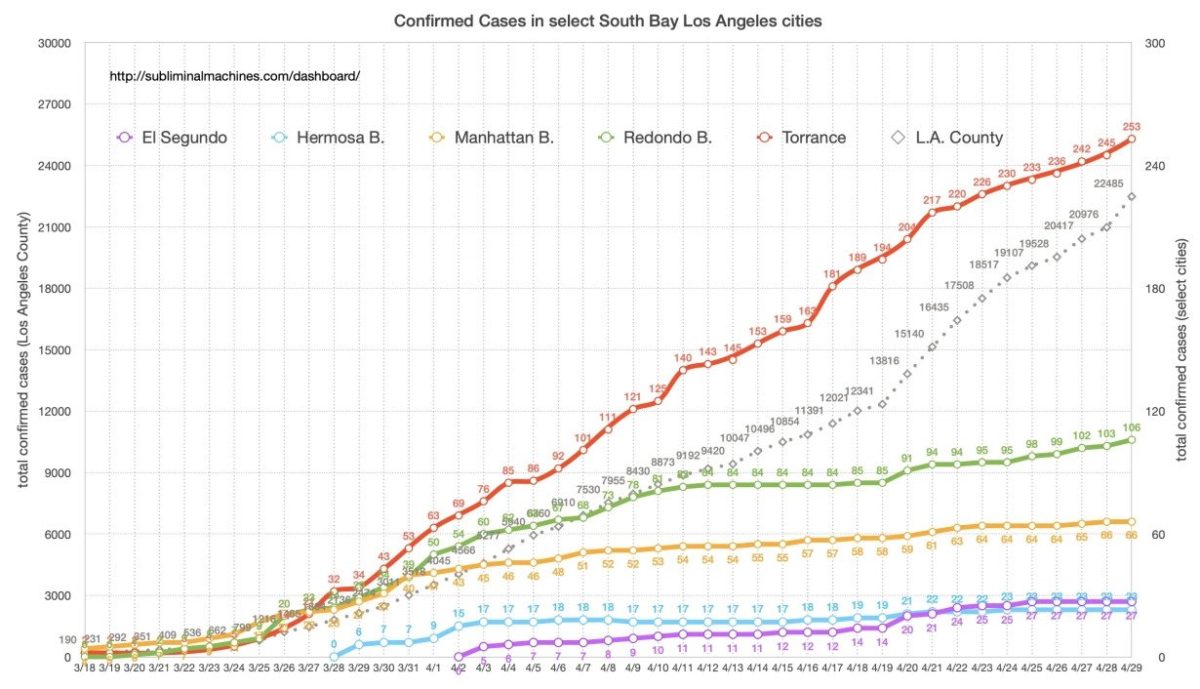 The number of COVID-19 cases in the South Bay and Los Angeles County. Graphic by Bernard Wong (subliminalmachines.com/dashboard)

The number of COVID-19 cases in the South Bay and Los Angeles County. Graphic by Bernard Wong (subliminalmachines.com/dashboard)

Nine people in the Beach Cities have died from COVID-19, according to newly released data from county health authorities.

This week, Los Angeles County Department of Public Health began releasing a breakdown of death, infection and testing information, revealing for the first time how many people in particular cities and neighborhoods have died in the coronavirus pandemic. According to those figures, the disease has claimed the lives of two people in Hermosa Beach, one person in Manhattan Beach, six people in Redondo Beach. No El Segundo residents have died from the disease, according to the data. The virus has killed 15 in Gardena, four in Hawthorne, four in Lomita, nine in the four cities on the Palos Verdes Peninsula, and 29 in Torrance.

Deaths and new cases continue to climb throughout Southern California. Public health officials confirmed 56 additional deaths from COVID-19 Wednesday, bringing the total to 1,056, and 1,541 new cases, bringing the total number of positive test results countywide to 22,485. Some of the new reported cases come from an outbreak at the Federal Correctional Institute at Terminal Island, where more than 400 jailers and inmates have recently tested positive.

But despite the increases, “meaningful modifications” to some of the measures put in place to combat the pandemic are likely in the coming weeks. Dr. Christina Ghaly, director of the Los Angeles County Department of Health Services, said the physical distancing measures called for in the county’s Safer at Home Order have achieved the goal of slowing the spread of the disease to prevent area hospitals from being overwhelmed. Projections for the number of hospital beds, spaces in intensive care units and ventilators all show that the area is likely to have enough to meet demand. Many hospitals and emergency rooms have reported excess capacity and empty waiting rooms, prompting some concern that patients may be missing needed treatment for heart disease and other illnesses out of fear of contracting COVID-19.

“The hospital system is there for you. It can take care of you whatever your condition is. We do not want people to stay at home with what may be life threatening conditions,” Ghaly said.

Healthcare system capacity is one of the key metrics identified by Gov. Gavin Newsom for beginning to reopen portions of the state. Ghaly said that although the county’s strategy appears to have slowed the spread of infection, it is unlikely to be fully relaxed even as the reopening begins.

“Physical distancing will be our new normal for quite some time,” Ghaly said.

The city-by-city breakdown had been ordered by the Los Angeles County Board of Supervisors, who were seeking to better understand how the coronavirus is impacting the county’s diverse population of more than 10 million people. From the beginning of the pandemic, officials warned that unequal access to testing meant that the number of reported cases was not an ideal indicator of how COVID-19 was affecting a particular area. For weeks, Manhattan had among the highest number of confirmed infections relative to its population size. But the figures released this week put its death rate below the county median. By contrast, some cities and neighborhoods with higher shares of low-income residents, which had previously reported relatively low case loads, had among the highest rates of death in the county. Countywide, death rates are also higher for black, Latino and Asian-Pacific Islanders than they are for whites and Asians.

Along with infection and death rates, the data also reveal widely different levels of testing. Among the parts of the county with the highest share of their population that have been tested are the cities of Malibu and Beverly Hills, and the Bel-Air and Mandeville Canyon neighborhoods of the city of Los Angeles. The higher availability of testing and relatively low rates of death in these affluent locations supports a fear among epidemiologists that pre-existing socio-economic disparities are aggravating the impact of the coronavirus pandemic. On Wednesday, Dr. Barbara Ferrer, Director of the Department of Public Health, described the trends as “troubling and of great concern.”

“They suggest that more affluent residents may have better access to COVID-19 testing and to health treatment services, even as rates of infection appear to be higher among low income communities and many communities of color,” Ferrer said Wednesday.

These trends do not entirely track with the affluent Beach Cities. The two deaths in Hermosa and six in Redondo put both cities slightly above the mean death rate for the county, and the median among all cities and neighborhoods. (This is true for both the “raw” numbers as well as an adjusted rate provided by the county, which takes into account the relative age distribution of an area.) Hermosa has a lower testing rate than the median, while Manhattan’s is slightly higher, and Redondo’s is approximately the same. Ferrer and Ghaly said adjusting for disparities will be guiding the county as it expands testing availability, another of the criteria for reopening set out by Newsom.

Newsom has warned of a possible spike if reopening is done too soon or without adequate precautions. Ghaly said preventing one is a matter of integrating many of the physical distancing measures into the reopening.

“None of that changes as we go into recovery. We just have to do it in a way that lets people go back to work,” she said.