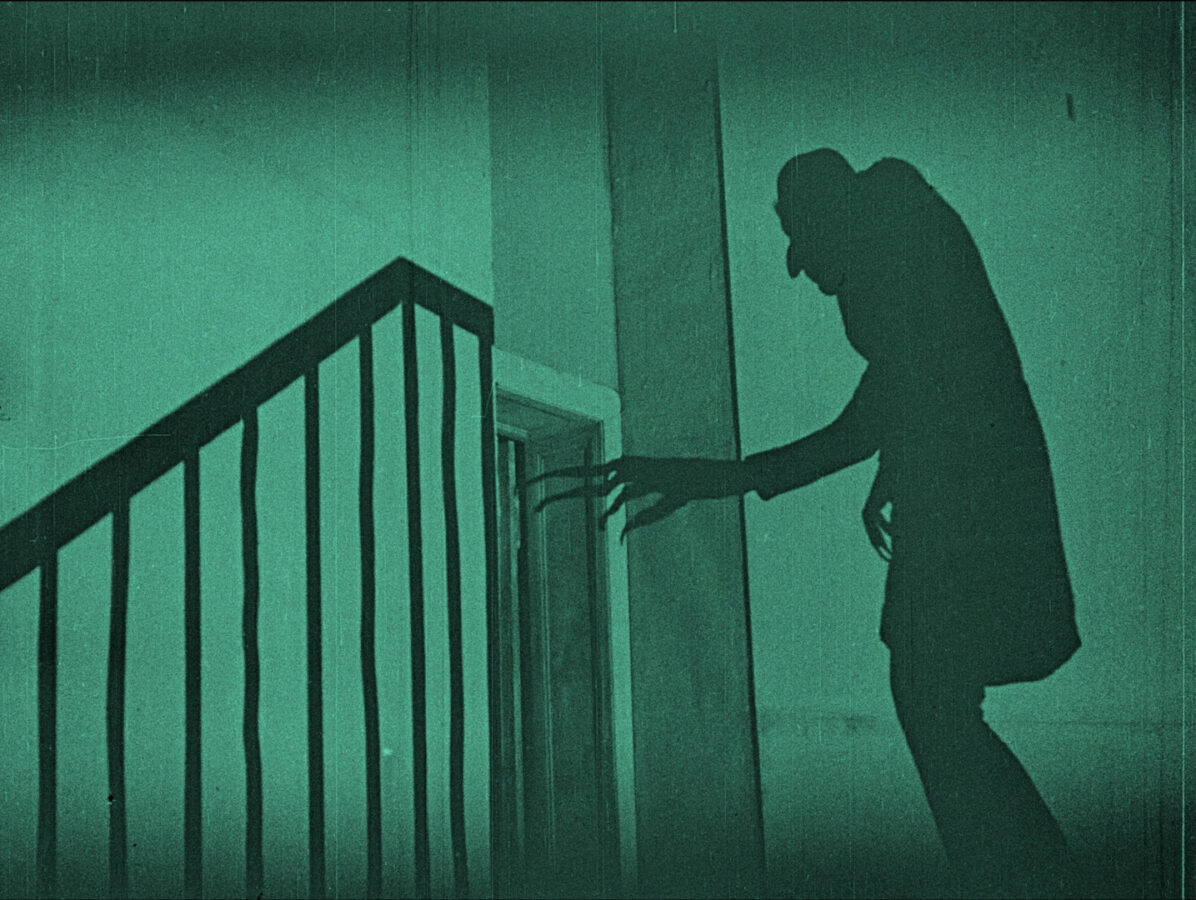 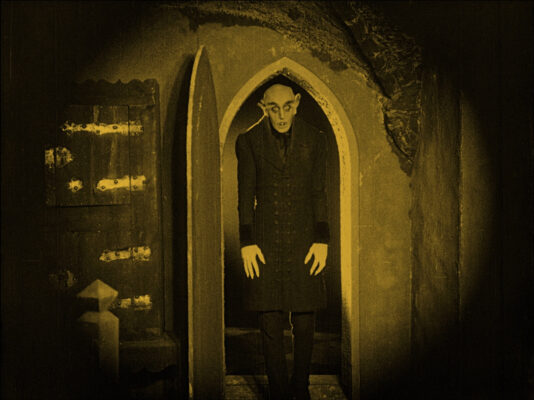 “Nosferatu,” the 1922 silent classic, has been given a full scale restoration and it’s a beauty. Mastered in HD from archival 35mm prints by Luciano Berriatúa, it was commissioned by the Friedrich Wilhelm Murnau Foundation for film preservation. Directed by F.W. Murnau, “Nosferatu” is the ultimate midnight movie that should live forever just like Dracula, the model for its protagonist.

Long before “talkies” and certainly CGI, Murnau was able to create a spooky, eerie atmosphere using shadows and exaggeration. Influenced by the German Expressionist style of cinema whose best example was Robert Wiene’s “The Cabinet of Dr. Caligari” (1920), Murnau stops short of using only painted sets. The distorted geometric angles with walls and floors painted to represent light and shadows typical of “Caligari” and the later “Metropolis” by Fritz Lang are found only in scenes with Count Orlok, the vampire. Scenes of the townspeople and the countryside are filmed traditionally which, in its own way, heightens the distortion of the monster. Do not expect subtlety. With only title cards, symbolism, and a broader style of acting than we are accustomed to, Murnau makes use of them all to propel his story forward.

We are first introduced to the lovely Ellen, wife of young estate agent Hutter, as she plays with a kitten. This is a typical character touchstone in silent films to show her purity and sweetness. We know less about her husband at the beginning, allowing for deeper development as the story unfolds. Here, villains looked like villains. Knock, the estate agent who sends his young associate Hutter to sell the mysterious Count Orlok an estate in their town, is like a decomposing painting, very much an expressionist character with his decaying teeth, bulging eyes, and bushy eyebrows. His greed is palpable and his appearance will disintegrate further as he comes more under the influence of the mysterious Count Orlok. 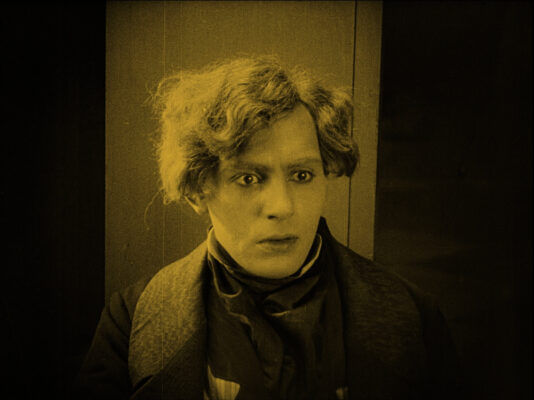 And Orlok? Hutter must travel far to see him, encountering villagers who quake at the mere mention of his name. It is with Orlok and his castle that Murnau goes full-on Expressionist with elongated shadows and painted silhouettes of the Count on the stairways. There is no doubt about the danger. But in case you missed it, Murnau has supplied Hutter with a book that was in the nightstand of his room at the village inn before leaving to meet the Count. The book, entitled Of Vampyres, Terrible Phantomes, and the Seven Deadly Sins, is the not too elusive hint of things to come that he, of course, misses until it’s too late. It is, no doubt, the seven deadly sins of pride, greed, lust, envy, gluttony, wrath, and sloth that trap Orlok’s victims in his web. Lust, as it turns out, will be the undoing of Orlok.

There are layers of meaning within “Nosferatu.” Vampire deaths are a metaphor for the plague. He is the very definition of the anti-Christ and it is not insignificant that the image of the cross is used as protection against him.

Count Orlok, the vampire, is from Transylvania, a mysterious and therefore suspicious foreign land far from the Germany of Hutter and Ellen. He is horrific in appearance and demeanor. He skulks, wrapping himself around corners and showing up suddenly, as if materializing out of thin air. He is frightening looking with his bald pate, razor teeth, long claw-like fingernails, enormous pointed ears, and sharp chin. Most prominent is his large hooked nose. The count is the very embodiment of the Jew of every Aryan’s nightmare. The anti-Semitism is not sub rosa, it is in plain sight for everyone to see. He is rich, mysterious, brings misfortune to all he sees, and is ultimately undone by the Shiksa goddess for whom he loses himself.

Watch this in a dark room and it still has the ability to send chills down your spine. Certainly there were plenty of midnight movie goers under the influence in the psychedelic 70s who went on bad trips.

The restoration is remarkable. Long since faded, the restorers used various tints to bring out the contrast in the shadowing. Hans Erdmann’s original 1922 score has been reconstructed by Berndt Heller and is appropriately evocative. Title cards help the plot move along and there are very few slow moments.

The original backstory on “Nosferatu” was that it was an unauthorized adaptation of Bram Stoker’s Dracula. Unable to afford the rights, Murnau went ahead with his own version. It originally lasted a very short time because the Stoker estate sued and won. Almost all prints of “Nosferatu” were destroyed. Luckily a few survived and even more fortunate was that Kino Lorber and the restorers were able to bring this classic back to the screen on its 100th anniversary.

Now playing on most major VOD platforms and streaming on Kanopy. Also available on Blu-ray and DVD.