“Nox” These are hard ones [TELEVISION REVIEW] 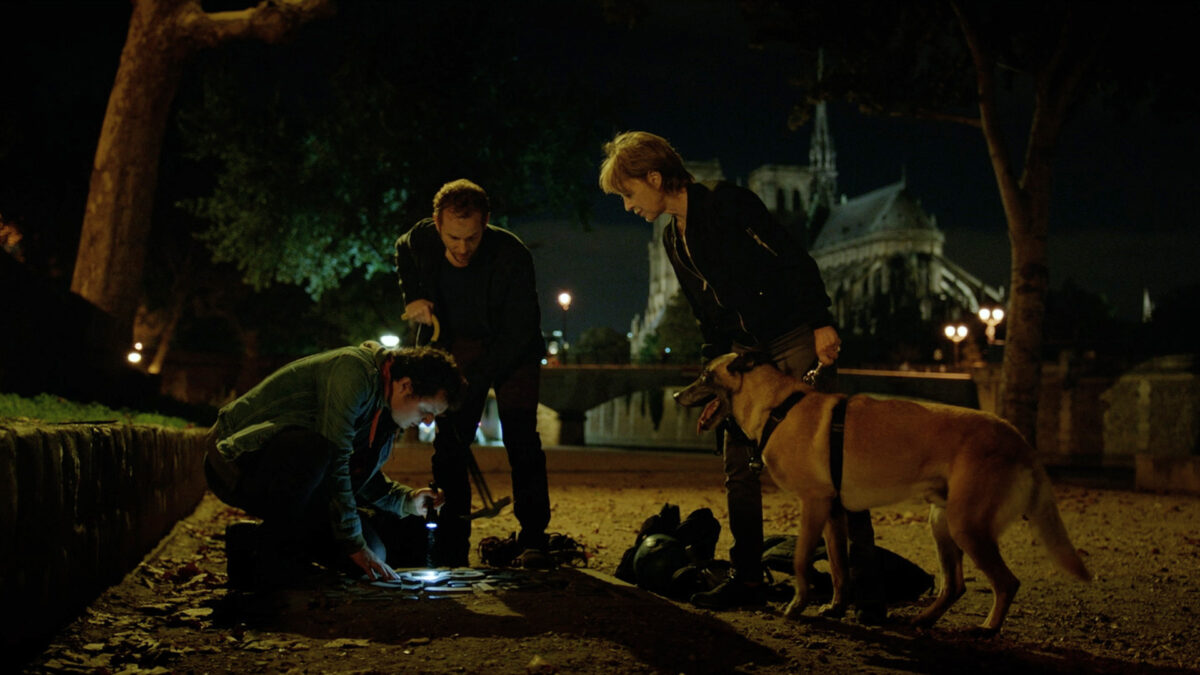 Malik Zidi as Berger and Nathalie Baye as Catherine in "Nox." Photo courtesy of Topic.com.

“Nox” is a hard edged, fast paced, gritty thriller that will make you think of the term “Spring Cleaning” in a whole new light, actually a whole new dark. A 6 episode limited French series that premieres in the U.S. for the first time since its debut in France in 2018, it will definitely leave you afraid of the dark. Effectively combining storylines of police corruption and a darknet murder club sharing the Paris sewers, an underground network off-limits to all but those of ill intent, it will leave you breathless in its scope and objective.

A highly organized band of thieves has been targeting ATM machines in Paris and using the vast sewer system for their escape. Police Captain Garraud, based on good information from a snitch is sure which ATM is the next target and which sewer access is the most likely escape route. He has positioned police officers Julie Susini and Raphaël Berger to stand guard in that tunnel with strict instructions not to move from the cite unless they receive a direct order. But Julie, always a hothead, charges into the tunnel, leaving Berger behind. That is the last anyone sees of Julie. Canvassing the well-charted and vast system of tunnels, the police come up empty. It’s as if she disappeared into thin air.

But there are other elements at play here. Julie was troubled. She had tried to go to her mother, a bitter retired cop, to unburden herself only to be cruelly shut down. Catherine Susini, her mother, couldn’t care less and tells Julie to get it together and just do her job. Secretly, Julie had also made overtures to Inspector Hadjii of internal affairs but failed to follow through, raising red flags in her wake.

Searching the tunnel network where Julie was last seen, a series of mass graves and two tunnel systems below the official subterranean network are accidentally unearthed. Shortly after this discovery, Captain Garraud, claiming lack of funding, effectively shuts down the hunt for Julie. Catherine, however, believes something else is going on. Guilt-ridden over her dismissal of Julie, she enlists Berger into helping her sub-rosa. The overly meek Berger, she points out, is responsible for Julie’s disappearance because, regardless of rules, you never leave your partner.

Berger, always the rule-follower and appeaser of those above him, is a very reluctant minion. But even he senses something is amiss in how the official inquiry is going, especially when he is put onto an entirely different investigation. But Garraud, sensing a newfound rebellion in Berger, suspends him. Berger agrees to help Catherine clandestinely.

Digging deeper (no pun intended), they uncover all kinds of mysterious behavior. For years, petty criminals and illegal immigrants have been disappearing. Only occasionally are questions asked when relatives make weak inquiries. Catherine, on the other hand, knows exactly what those disappearances mean and how they might relate to Julie. She calls it “Spring Cleaning.” When the police are unable to make charges stick on repeat offenders, they would occasionally be “disappeared.” It’s not a new phenomenon but it certainly heightens Catherine’s suspicions of corruption within Julie’s division and the reason she might have gone to Hajii. 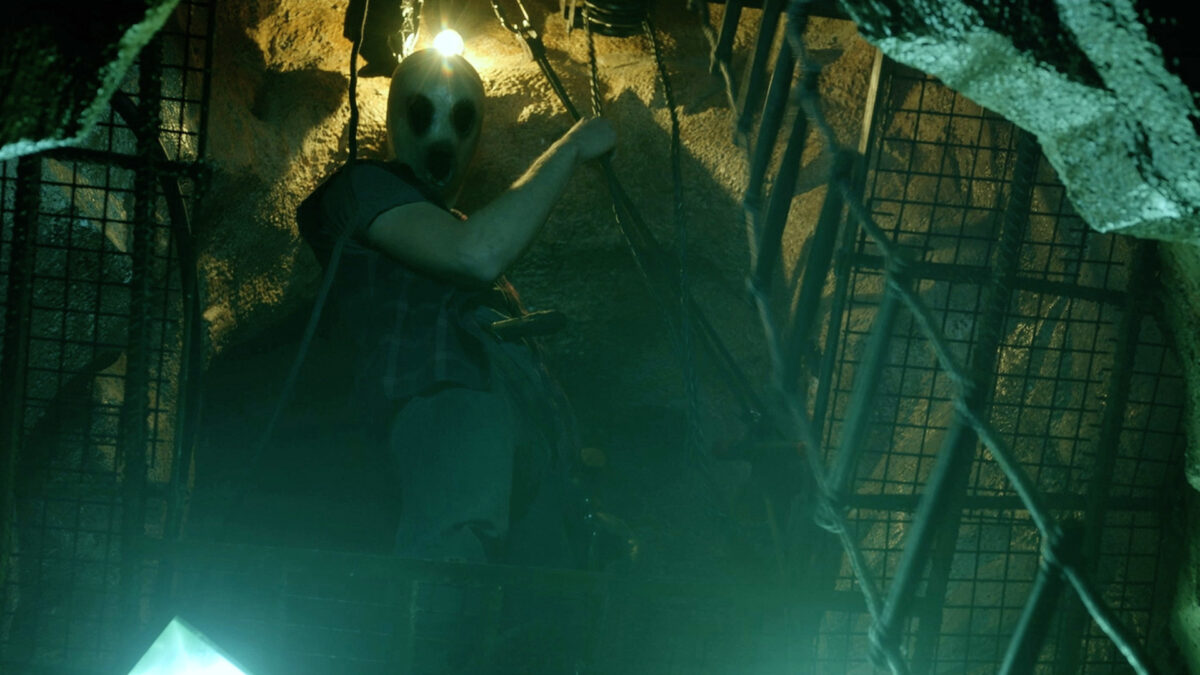 Nox in the film “Nox.” Photo courtesy of Topic.

But unknown to anyone up to this point was that a private society called Nox, existing out of sight on the darknet, has been operating a murder club in those same tunnels. Nox serving the psychopathic tendencies they believe are possessed by all, run a lucrative “murder for amusement” business using the homeless as their prey. It is the intersection of Nox and the corrupt police coverup that raises the stakes and brings the tension to a boiling point.

“Nox” is binge-worthy entertainment. It is a thriller that horrifies with each new revelation and yet, like a train wreck that will result in multiple fatalities, there is no way to stop watching. Just as one horror wanes, another picks up speed. The spotlight shining on the worst aspects of human nature is blinding.

The excellent cast is led by Nathalie Baye as Catherine. Baye is one of the great actresses of her generation (in other words, she’s no spring chicken) and has several César awards to prove it. Her television work is also notable. She parodied herself in “Call My Agent,” and had a very memorable role in the excellent series “Criminal: France.” In “Nox,” she is straightforward, unpleasant, bitter, unapologetic, and self-centered. There are no histrionics, just seething anger below the surface. And yet, her Catherine grows as she allows a certain amount of vulnerability to pierce her very thick armor.

Malik Zidi as Berger is ambivalence personified. As he begins to recognize and accept his role in Julie’s disappearance, he allows this responsibility to envelope his increasing guilt.

Maïwen as Julie successfully conveys a diamond hardness that covers ambivalence and guilt. Frédéric Pierrot as Garraud will transform from well-intentioned to evil caught in a net that may or may not have been his making. The episodes, as they unroll, will give you a clearer picture of who he is. Lubna Azabal, internal affairs inspector Hadjii, plays her character as dispassionate, almost amused by the machinations unraveling around her, until she is no longer. If there is a rooting interest in this short series, my vote goes to her.

Sergi Lopez, whose international career includes “Pan’s Labyrinth” and “Dirty Pretty Things,” has a short but sympathetic and revealing role as Julie’s stepfather and Catherine’s ex-husband that adds depth to Julie’s support system and Catherine’s selfish dysfunction. In someone less capable’s hands, this role would have been strictly expositional. He makes it anything but. The quintessential character actor, he always adds enormously to anything he appears in.

All episodes were very tightly written by Fred Cavayé, Quoc Dang Tran, and Jérôme Fansten. They successfully create and solve this Rubik’s Cube of a puzzle, never allowing any sentimentality to slip in. Mabrouk El Mechri (“The Cold Light of Day”) directed all episodes, leaving no breathing room for the viewer.

Cinematography is of special note not just because Paris becomes one of the characters in the film but also because of the scenes realistically filmed under limited lighting in what transpires to look like the sewer tunnels. Credit goes to Pierre-Yves Bastard and Pascal Rabaud for that claustrophobic feeling.

I’m glad I visited the Sewers of Paris when I was a child because I’m definitely not going back now!