“Off the Rails” – Way off [MOVIE REVIEW] 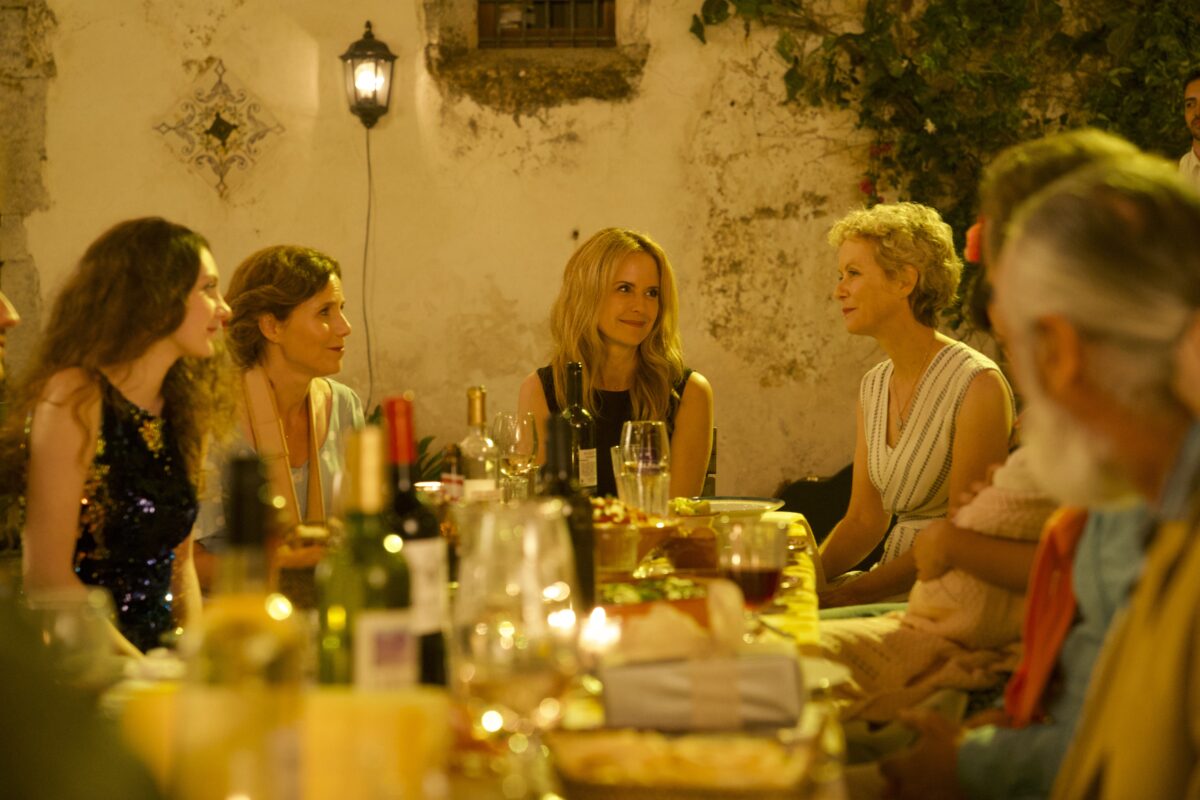 Elizabeth Dormer-Phililps as Maddy, Sally Phillips as Liz, Kelly Preston as Cassie, and Jenny Seagrove as Kate in "Off the Rails. Photo courtesy of Screen Media.

Rarely has there been a more apt title for a film than “Off the Rails.” This banal and poorly directed story of middle aged women trying to recapture a happier moment from their past wastes not only the talented cast but, more importantly, our valuable time. Directed at a snail’s pace by Jules Williamson, no cliché has been left out by writer Jordan Waller.

Opening on the funeral of Anna, beloved daughter of Diana and mother of Maddie, we first meet Anna’s erstwhile best friends, the now estranged Liz, Kate, and Cassie. Anna has left her three fifty-something friends a gift: unlimited rail tickets so that they can retrace the trip they took when they were Maddy’s age and finally see the sunlight image that happens but twice a year at the magnificent Gothic cathedral in Palma de Mallorca. It goes without saying that they will take Maddy with them.

Guilty that they didn’t try hard enough to support Anna, the women try to overlook the differences that came between them. Liz, the control freak, is a doctor with a seemingly picture perfect home life. Kate is acerbic and broke. Cassie, the lone American of the group, is an actress who stars on a popular soap opera. Undergoing a custody battle for her son, she must also contend with a drinking problem she refuses to acknowledge. The main conflict is between Kate and Cassie because Cassie married Kate’s boyfriend. Kate has never recovered from this long ago betrayal and has since slept with Cassie’s soon to be ex. That they’re willing to travel together defies credulity.

In any case, off they go, backpacks stuffed and Maddy in tow to relive the wonders they once experienced, beginning with Paris. Against the wishes of everyone, Liz has insisted on keeping their passports and pooled money in her tummy pack – that would be a fanny pack worn in front. Obviously the filmmakers found this to be a source of constant amusement. Its loss will be the focal point for all the “hilarity” that ensues.

Barcelona is next on the list where they meet Dan, an ex-pat Brit who plays the guitar in public. He’ll come in handy later. Partying like it’s 1980 against a constant backdrop of Blondie music, said tummy pack is lost, the very tired “girls” get on the wrong train and end up in Italy instead of Southern Spain where they were to catch a ferry to Palma. To make matters worse (how is that possible, you say?) they have no money and they must take multiple trains with multiple stops if they want to make it back to Spain. But of course there are detours. Liz delivers a baby and Cassie finds a temporary mate in the handsome Giovanni. More trains are missed, more recriminations fly, and before you know it, they’ve even lost Maddy, the most mature of the lot.

Oh dear! Will they make it to Palma? Will they find Maddy? Will they make up? What do you think? It’s predictable, flat, and essentially charmless. Even the special guest stars of this Lifetime-style movie of the week (and that’s actually not being fair to Lifetime), who breathe momentary life into this moribund scenario are wasted. And here we’re talking about the redoubtable Judi Dench as Anna’s mother, the always humorous Ben Miller as the Barcelona guitar player, and the still charming Franco Nero as the seductive Italian who beds Cassie. 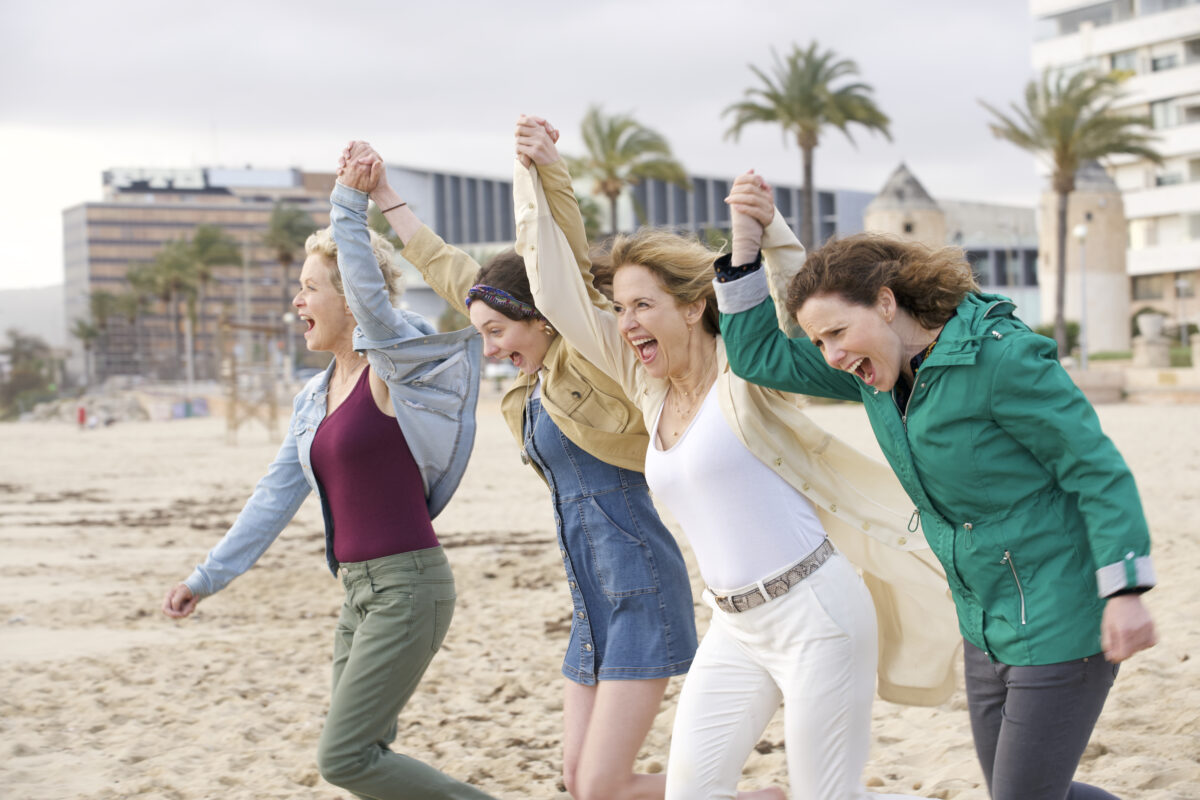 Jenny Seagrove as Kate, Elizabeth Dormer-Phillips as Maddie, Kelly Preston as Cassie, and Sally Phillips as Liz in “Off the Rails.” Photo courtesy of Screen Media.

The lead women are all terrific actresses given the right material. Elizabeth Dormer-Phillips is sympathetic and mature as the youngest of the group, Maddie. Jenny Seagrove, Kate, has a hard edge of brittleness but shows little else. Sally Phillips, the great comedic supporting actress from the “Bridget Jones” series and “Miranda,” is Liz, the brunt of the writer’s vision of controlling women who are blind to what happens around them. And finally, poor recently deceased Kelly Preston, who, in her last film appearance is given the flat role of Cassie, an alcoholic actress still trying to recapture her youth. She deserved better, much better.

The road trip, bonding, midlife crises, reconciliation, life lessons, they’ve all been done before and much much better. Still, it’s not the familiarity of the material that’s at fault, it’s the mediocrity of the presentation wasting talent, scenery, and energy that sinks this ship.

Opening Friday December 10 at the Laemmle Glendale and On Demand.