The happy ballad of the Old 97s 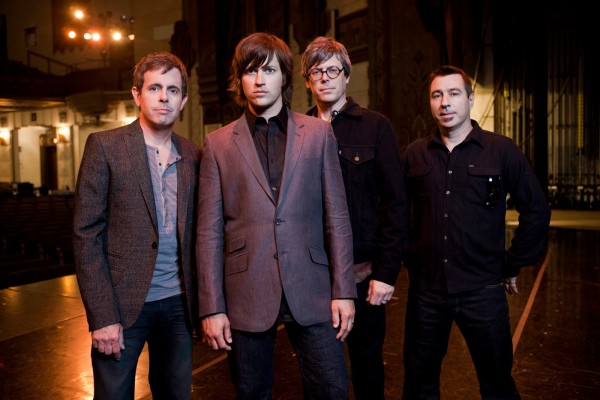 The Old 97s play Music on the Meadow at Terranea Resort May 31. Courtesy photo.

Pioneering Americana band plays Music on the Meadows at Terranea

The Old 97s play Music on the Meadow at Terranea Resort May 31. Courtesy photo.

The story of the Old 97s begins circa 1985 on railroad tracks outside Dallas, Texas, where a 14 year old boy suffering an existential whammy fell down to die.

Rhett Miller had a bounty on his head. It had been issued by an angry football player at his high school who didn’t like Miller’s good looks; it was only $15, granted, but incentive enough for several beatings, which were getting old real quick.

And then Miller arrived home one day and saw a brass figurine at his mother’s house and decided enough was enough.

“I looked at that and thought, ‘That’s it. That is all there is,’” Miller once told NPR’s Terry Gross. “There is just an accumulation of chotzky’s, placing them throughout your house, walking past them and then dying… I couldn’t figure out why I would want to go on living at that point.”

So he swallowed lighter fluid and valium and took off running down nearby railroad tracks until he passed out. When he opened his eyes again, a pretty girl was reaching down to help him up. She got him to a hospital, and of course later they dated.

Things have been looking up ever since.

“I think that was God,” Miller said. “It’s not going to be your parents, it’s not going to be the kids at school – the thing that is going to help you get out of this is the beauty. Maybe girls, maybe just the beauty of words, of accomplishment, or kids – but thank God for that thing that pushes whatever tiny button in our heart and makes it sore for one second.”

The Old 97s are the Rolling Stones of Americana. They emerged alongside other bands who have since passed into legend — such as Uncle Tupelo and Whiskeytown — bringing punk rock zeal and thrash into what had become the somewhat staid territory of country music. What set the 97s apart was their joyousness. They never took themselves too seriously, and the band’s freewheeling, celebratory live shows became major festival attractions. Like the Stones, the Old 97s never quit. They are in their 21st year as a band; unlike the Stones, they keep getting better. Last year’s Most Messed Up, the band’s 10th studio record, took a long look at the Old 97s’ way of life and was somehow both a bit dark and deeply grateful. On the lead track, “Longer Than You’ve Been Alive”, Miller wryly notes, “Now I’ve made a living out of shakin’ my ass, and if you offered me an office I’d have to pass. But our jobs are all jobs, and sometimes they suck — I love what I do, and I’ve had pretty good luck.”

Miller is one of the great, most underrated frontmen in recent rock history. There’s something Shakespearean about him — his flowing locks and ridiculous handsomeness give him a rakish princeliness, of course, but what he brings to bear is as much about substance as style. He’s a wild-eyed yeasayer who is smart, funny, and deeply observant. His craft as a songwriter is so strong that he gets away with more than he should — like Shakespeare’s jokers, he employs humor to actually drop poetry and meaning on the unsuspecting masses, albeit poetry you can drink to.

Miller was a writer before he was a musician. He attended Sarah Lawrence College on a creative writing scholarship (The Old 97s website might be the only site of its kind that includes a glossary of terms).

Rhett Miller is one of the most underrated rock frontmen of his generation.  Most likely because he’s so damned happy.

“I started off wanting to be a writer,” he said. “I really kind of believed in poetry…But I knew I could never be a poet — that is really not a job description with any kind of upside. But if I learned to play guitar nobody would know. That’s just the way it is; songwriting and rock ‘n’ roll are way more acceptable. I just try to inject a little bit of poetry in there.”

His songs seem to come from that angle in which he found himself at 14 — his characters are drunk, disorderly, or often otherwise down for the count, but they are always looking up, messed up but hopeful, finding beauty in the most unexpected of places.

Miller said the trick is to make “thorny ideas” palatable, even fun. Take his song “Intervention”: “My friend Richard’s in a bad bad way/waking up beaten up every day/drinking malt liquor smokin’ menthols/diggin’ a hole climbin’ the walls/yeah we gotta figure out how to get his attention…”

He takes his responsibility is as an entertainer first and foremost.

“It takes a lot of effort to get out to the club or the concert that night,” he said of his audience. “I want them to have fun. It’s hard leaving the house, incredibly hard, and more so as the world becomes more tied to handheld devices and whatnot. It’s an investment in time and money, and I want people to feel good about it. And I don’t want people feeling they were dragged out to hear my diary.”

The band itself is formidable. Anchored by co-founder Murray Hammond on bass, with longtime members Ken Bethea on guitar and Philip Peeples on drums, the 97s are a chugging, utterly dependable rock machine. Miller himself is at the peak of his powers — he’s also released four solo records in the last four years, including a genuine masterpiece, this year’s The Traveler (with REM’s Peter Buck and Portland-based band Black Prairie). Collectively as well as individually, the Old 97s have hit the 10,000 hours research indicates leads to mastery.

“Man, we’ve been so lucky,” Miller said. “I love it. I love my job. I do think as I get older, as my knees get more and more thrashed, I’ll turn more to prose writing, I’m hoping. But there is still something about the immediacy of a song that trumps all other art forms, to me. You can’t walk around all day reading a novel, you can’t drive a car reading a short story, but pretty much everywhere you go in life you can take a song. I still get obsessed, listening to a song over and over and over, whether I’m behind a wheel driving or laying in bed.”

As “Longer Than You’ve Been Alive” reports, there are some hazards that come with the job: “Bottles of whiskey bottles of beer/there’s a bottle of medicine somewhere ‘round here/we’ve been in nightclubs and we’ve been in bars/honky-tonks and theaters from Memphis to Mars/most of our shows were a triumph of rock/although some nights I might have been checkin’ the clock/I’m only human though I’m super at times/I’ve jumped off of risers I should not have climbed/rock jumps won’t kill you ‘til one of them does/well they’ll say he died doing what he loves…”

But all things considered, Miller is most likely to only get better and the 97s more vital as time goes on.

“It’s weird and crazy we get to keep doing this job,” Miller said. “But I’ll take it, man.”

The Old 97s play Music on the Meadows at Terranea in Ranchos Palos Verdes May 31 on a bill that also includes Dustbowl Revival. Noon to 5 p.m. Tickets $25, VIP meet and greet and reception with the band $75. The day’s festivities also include farm-to-Terranea cuisine, wines, craft beers, and a kabob station. 100 Terranea Way. For additional information and room specials, please visit Terranea.com or call 310-265-2771.