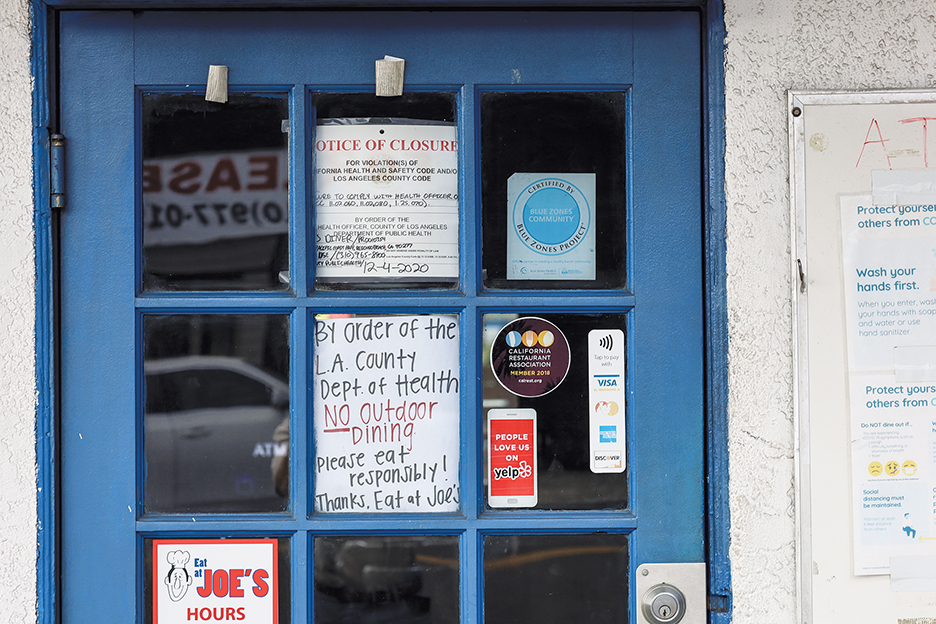 Eat at Joe’s in Redondo Beach was closed and fined by the County Health Department four days prior to a court ruling the County outdoor dining ban was ‘arbitrary.’ Photo

Eat at Joe’s in Redondo Beach was closed and fined by the County Health Department four days prior to a court ruling the County outdoor dining ban was ‘arbitrary.’ Photo

“By failing to weigh the benefits of an outdoor dining restriction against its costs, the County acted arbitrarily and it’s decision lacks a rational relationship to a legitimate end,” wrote  Supreme Court Judge James Chalfant in his court opinion.

Judge Chalfant limited the ban to three weeks and ordered the County to produce a risk benefit analysis when the ban expires on Dec. 16.

The counties ban on outdoor dining went into effect Nov. 25, just days before Governor Gavin Newsom announced a separate, regional lockdown order for counties whose availability of ICU bed was below 15 percent..

As of Monday, LA County and the San Joaquin Valley were already below that threshold, sitting at 10.9 percent and 6.3 percent, respectively. LA County reported 10,528 new cases on Sunday, Dec. 6 — a county record.

The California Restaurant Association sued the County over it’s Restaurant Closure Order. The suit argued officials hadn’t released sufficient evidence to support shutting down outdoor dining, which many restaurateurs have said is a lifeline to staying in business during the pandemic.

Some cities have gotten creative in their attempt to circumvent the county ban on outdoor dining, while other restaurants have ignored the public health order altogether.

Redondo Beach diner Eat at Joe’s was shut down mid-service on Friday after owner Alex Jordan refused to close the restaurant for outdoor dining. 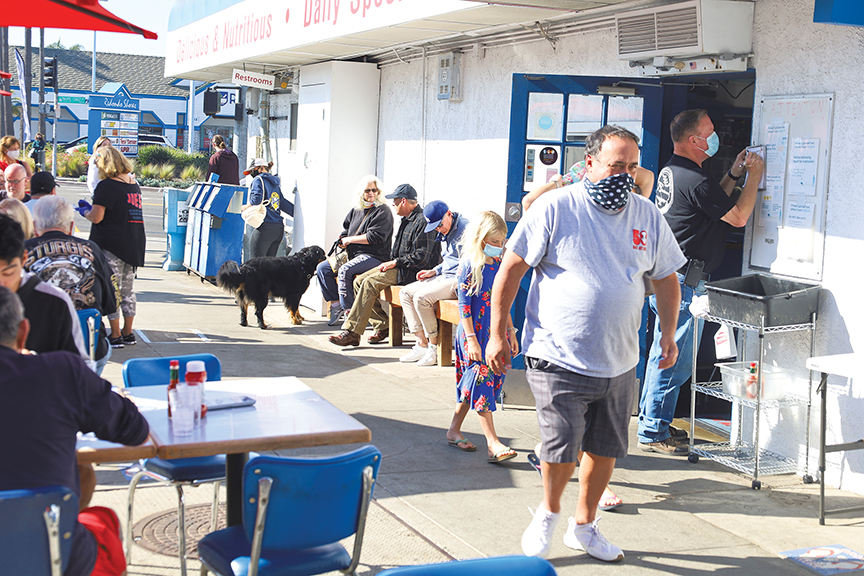 Three days before, county officials showed up to Eat at Joe’s and issued an order to stop serving customers on his outdoor patio and told Jordan they’d be back on Friday if he didn’t quit. Redondo Beach police and the fire department were called to keep the peace while county officials issued a written warning, according to police chief Keith Kauffman.

When county officials showed up on Friday, they issued Jordan a $500 fine and shut down his business — take-out included — for 10 days beginning on Dec. 4.

The Skechers Restaurant COVID Relief Fund will support struggling Manhattan Beach restaurants with a maximum total contribution of $500,000, according to a press release issued by President and Manhattan Beach resident Michael Greenberg.

Allen Sanford, founder of the BeachLife music festival, and part-owner of multiple south Bay restaurants, took it upon himself to build a data set that reflects outdoor dining’s impact on coronavirus spread in the South Bay cities.

Sanford collected data from 1,802 restaurant workers from 52 different establishments across the South Bay. He found that employees had worked a total of 1.2 million hours since May 1, and that restaurants had lost a combined $25 million in that same time period. According to his data, 50 out of 1,446 employees tested positive for coronavirus in that time, putting the rate of infection at 2.48 percent

“I would like to have elected officials really tell us what’s behind that decision, because I have a feeling they don’t know and they’re just throwing everything at the wall that they can get to stick,” Sanford said. “I just was genuinely concerned that both sides were getting into a conversation that was just emotional and had no data involved in it.” ER