Sights in the South Bay inspire this homegrown trio 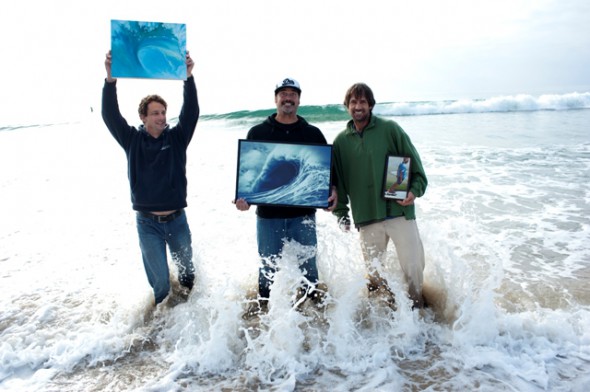 One for all, and all for one. Painters Jeff Honea and Rob Waxman, plus photographer Brent Broza, are as closely knit as the Three Musketeers, their mutual admiration for one another evident in “Paint Shoot Paint,” going on view Friday, Dec. 2, at Riley Arts Gallery in Manhattan Beach.

“We were all born and raised right here,” Waxman says.

He’s not referring to the Easy Reader conference room, where our conversation took place, but, as Honea clarifies, “Manhattan mostly, Manhattan and Hermosa.”

Not only are the three men local residents, their art is inspired by and reflects where they live.

Referring to the upcoming show, Waxman says, “It’s gonna be kind of unique, it’s gonna be cool because we are all doing surfing or beach-related topics. That’s what we know. It’s what we’d see, and we’ve all been surfers since we were kids.

“I have quite a few pieces,” he adds, “that are gonna be just local places, either scenes of PCH or the Manhattan Pier, things that are related to surfing and the beach.”

In Honea’s case, “It’s all waves; and not even surfing, per se, it’s just waves. Some more representational, some almost borderline abstractions inspired by waves, the lines and the colors and the motion – the movement of waves.”

“We gravitate towards the ocean,” Broza confirms. “So, shooting waves and stuff like that; that’s pretty much how I got started. I thought it was just cool. But more and more I find myself doing other things, and actually getting into more alternative stuff… I don’t want to get pigeonholed into just doing the surf stuff.”

Of the three artists, it’s Jeff Honea who’s probably the best known and the most established. While Broza and Waxman clearly respect his work, Honea in turn feeds off their friendship and the exchange of ideas: “One of the things I think is really exciting, and it’s really driven my work, is knowing that these guys are doing really good work – and so it’s motivating and inspiring that way.”

Perhaps the progress they’ve made would suggest otherwise, but Broza and Waxman have not been pursuing their craft for very long, only a few years.

“I met a girl who’s an artist and so I started painting because she started painting,” Waxman says. “He [Broza] saw some of my stuff and said, I can do that. He went for it, painted some really cool stuff, and decided painting wasn’t for him. And then a year later he’s one of the best photographers in town. So, he had it in him. I think that was probably six, seven years ago.”

Broza points out that he “started shooting seriously in 2008.”

Early last year Broza and Honea paired up to show their work at Sangria in Hermosa Beach. That came about after the two had run into each other on the pier, where both had gone to photograph the especially large waves that day (in Honea’s case, he was gathering reference material for his wave paintings).

“I was a little jealous because I wasn’t involved,” Waxman says with a laugh, “but we got to talking and decided that we’d do a show.” A few months went by, and then a few more: Their hoped-for summer show is now taking place in December. “Summer in Australia,” Waxman says.

Why there, and how many?

Why are they exhibiting at Riley Arts Gallery?

“All three of us are represented at that gallery year round,” Broza says. “It’s like a no-brainer.”

“It’s a great space, and Kim there is a big champion of local artists,” Honea says. “We’d like to see it continue to grow as a real hub for the broader community of artists and collectors.”

Waxman adds that since all their friends and extended families are in the South Bay, it’s the place that will be best attended.

Honea figures there’ll be 30 to 40 pieces in the show total. Broza’s hoping to have eight to 10, but as many as 15 of his photographs, while Waxman estimates 15 and Honea about a dozen. Almost all of the work will be new, or never before publicly displayed.

To return once more to our Three Musketeers analogy, Waxman says that they feed off of one another’s work. “Hopefully it keeps going forever,” he says. “I know that the quality of the work just improves every month, every week, everyday pretty much that new stuff comes out. As artists, every time we create a new piece we learn something and apply it to the next piece.”

“These guys,” says Broza, “have been great inspirations for me.”