Limitless: 11-year-old Alexis H. Dugel follows her heart and her dream with The Sky’s the Limit 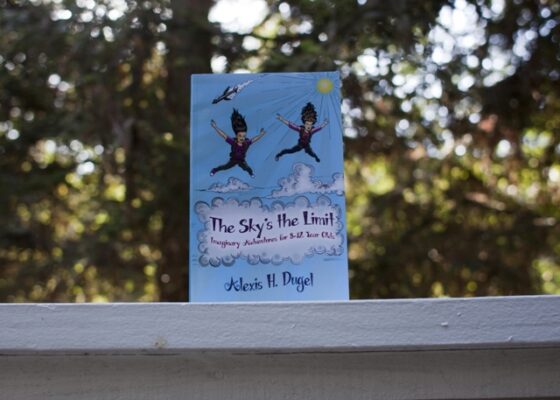 The written words of author Alexis H. Dugel were reaching children across the globe when she was just ten years old.

Now 11 years old and headed to the fifth grade this fall, Dugel finds herself looking toward to her future in writing with high hopes and aspirations.

Dugel’s parents, both optometrists, realized that their daughter was interested in writing after she scored in the top one percentile of the Educational Resource Board’s Writing Exam. “It is a two day exam administered in over 2,000 schools nationwide,” Dr. Raj Dugel, Alexis’ father, explains. “We were quite astonished by her scores, thus prompting us to collate her stories.”

“Writing a book is something that I have always wanted to do,” Alexis Dugel adds, “and my parents worked with me to reach my goal.”

The Sky’s the Limit: Imaginary Adventures for 8-12 Year Olds, Dugel’s first book, is a charming and imaginative compilation of ten short stories written in third and fourth grades at Lunada Bay Elementary School.

“My third and fourth grade teachers used to give us different writing prompts each week, and we would respond to the prompts with short essays or stories. I chose ten of these that I especially liked and put them together in the book,” Dugel explains.

The short stories all revolve around the exciting, imaginary adventures that Dugel and her friends take, and include encounters with friendly vampires, impromptu skydiving, and a robotic substitute teacher named Ms. Sticky.

Each story is unique, creative, and full of imagination. “They were all very fun to create and write,” Dugel explains, “but if I had to pick, I think my favorite story is ‘My Favorite Place,’ which is about a few of my friends and me traveling in a limousine to an amazing imaginary amusement park called Funworld.”

Dugel didn’t know what to expect when compiling and publishing her work, “but one thing I knew is that I have always intended on donating my book to nations around the world,” Dugel says. In fact, the book itself is dedicated to children around the world, proceeds going directly to schools in need of school supplies, books, and other educational necessities.

“My father grew up in Nepal, and went to school there,” Dugel says. “The school he went to was actually the first school I wanted to donate my book to.” Plans for the family to visit the school Dr. Dugel attended fell through due to travel advisories, but the family managed to mail copies of The Sky’s the Limit to the school, and instead traveled to Jamaica. “We visited a lot of schools in Jamaica, giving them copies of The Sky’s the Limit, but the school that stood out the most to me was the Falmouth All Age School. They were so gracious to us, and so excited to receive the book. It was just amazing to be there and be a part of that.”

Dugel’s travels didn’t stop there. In February 2012 on a school break, the Dugel family travelled to the rural area of Cusco, Peru, delivering copies of The Sky’s the Limit to local schools. “One girl in particular really stood out to me. Her face was hidden by a red sunhat, and she was really shy. I instantly wanted her to have the confidence to imagine a future where she could be come anything she wished.”

These experiences only solidified Dugel’s reasons for donating her stories worldwide. “It was really rewarding to go to all of the different schools and meet all the kids, who are just like me and my friends,” Dugel explains. “Everyone was so grateful that we were there visiting, and just seeing the smiles on their faces made me glad that I had written the book and could share it with them.”

In addition to Jamaica, Nepal, and Peru, Dugel has also sent The Sky’s the Limit to schools in Mexico. She plans on someday distributing in other nations as well.

“I have always loved to travel to new places to experience the lifestyles, culture and food,” Dugel says. “And now when I visit other countries, I get to give other kids copies of my book as well. It’s just a great feeling to be able to do that.”

Dugel’s international efforts continue right at home, too. Within the United States, Dugel has donated copies to local library branches and schools, as well as to the Pediatrics Department at both Providence-Little Company of Mary Hospital and Torrance Memorial Medical Center.

School principals, hospital staff, and librarians and teachers have written to Dugel, congratulating her on her stories. “They are all impressed at the quality of her work, considering her young age,” Dugel’s mother, Dr. Carrie Dugel, says. “They also hope that in reading Alexis’s stories, the other children will be encouraged to write their own, which is our hope as well.”

Dugel encourages anyone—and everyone—to write their own stories. “If you keep imagining and dreaming, one day you, too, can achieve your own goals.”

“My advice to anyone, really, would be to never give up. Whether you want to write a book like the one I wrote or do something else, there should be nothing stopping you—just go for it!”

In the future, Dugel sees herself continuing with her writing career, following in the footsteps of her favorite author J.K. Rowling. “She is just so creative, and can set the scene so that you can see yourself in the story just from reading the words on the page,” Dugel says. “I want to write a series like hers, where I can paint a picture in the minds of others.”

Other favorites of Dugel’s include the Nancy Drew series by Carolyn Keene, and the Camp Confidential books.

“It’s my dream to become a fiction novelist for children and adults,” Dugel gushes. “When I’m not writing, I’m busy dancing, playing basketball, hanging out with my friends, and trying to train my pet beta fish, Rocky,” she laughs, “but writing is just what I do. I couldn’t imagine my life without it and I know I will always want to keep writing. I am grateful that my parents and friends support me one hundred percent,” she says.

Dugel plans to start working on a full-length novel later this year. “I don’t know what it will be about yet, but I’m excited to write a longer story and see where it goes.”

Dugel will be holding a book signing on Saturday, October 6, at the Palos Verdes Peninsula Center Library, located at 701 Silver Spur Road, from 2 to 5 p.m. Dugel plans to donate all proceeds to schools in Nepal and Peru, and the first twenty children who attend the signing will receive a complimentary signed copy of The Sky’s the Limit.

Additionally, The Sky’s the Limit is available for purchase at Amazon.com.