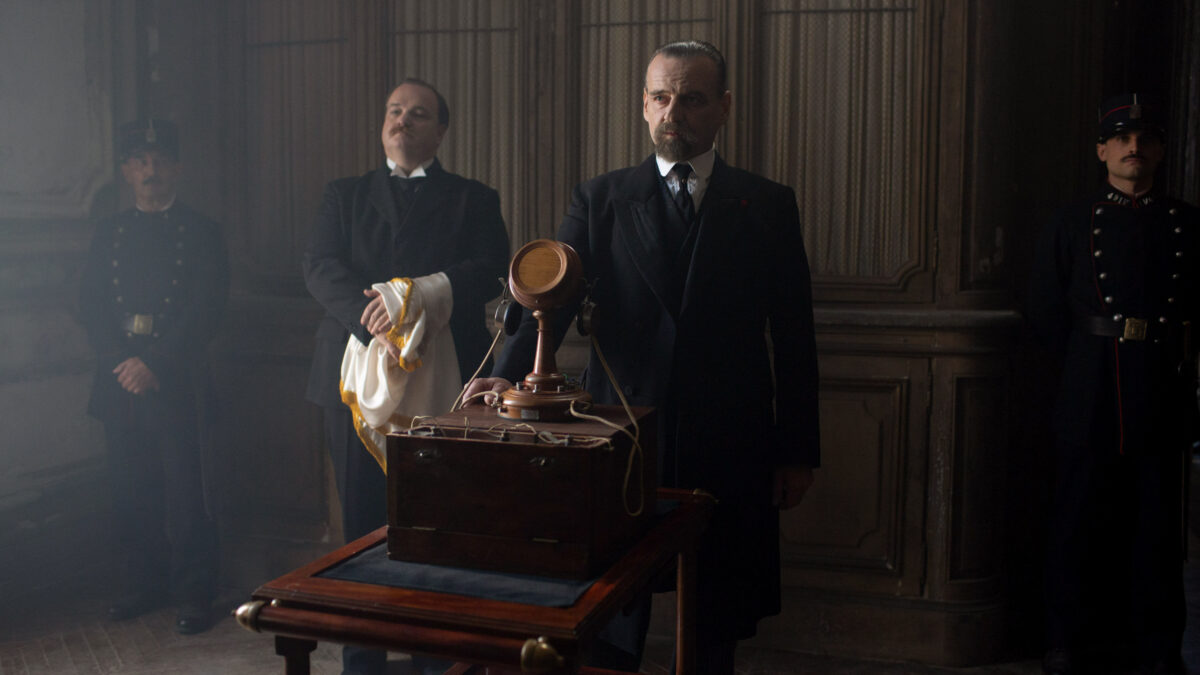 Corruption, murder, right wing fanatics, anarchists, sex, blackmail. As the French would say, “délicieux.” 1900, thought of as the Belle Epoque, all fashion, society, wealth, art, and music, was anything but beautiful. The members of the Haute Sociétée were also members of groups promoting ultra right wing causes, government overthrow, and price fixing. President Félix Faure has just died, but before he died he went to “heaven” with his mistress, Marguerite Steinheil, on her knees. 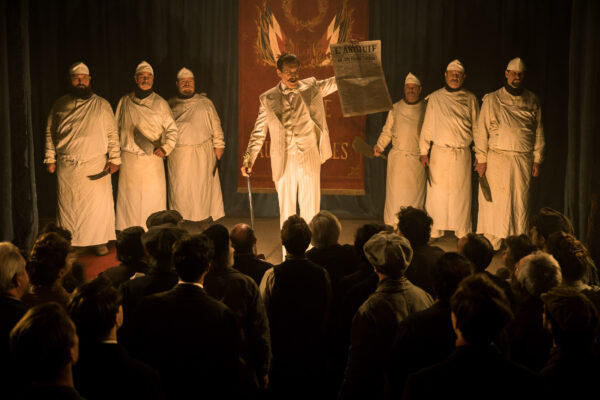 Hubert Delattre as Jules Guérin and his Butchers in “Paris Police 1900.” Photo courtesy of MHz Choice.

The streets are alive with talk of insurrection with the radical right wing plotting against their enemies and fomenting riots against supporters of Alfred Dreyfus who’s about to get a retrial in the city. The air is crackling with anti-Semitism, rivaling the movement that will spring up in Germany in a couple of decades. The Guerin family, mother, son Louis, and alpha son Jules, lead the pack with their newspaper called The Anti-Semite (no subtlety there), supported by the butchers’ union, a group of thugs known for their carving skills on both animals and humans.The police department is in a shambles and the state ministers, worried about upheaval in the ranks, the potential riots in the streets, and the increasing unsolved murders, return to the well. They ask former Police Chief Louis Lépine to return from retirement and clean up the department. 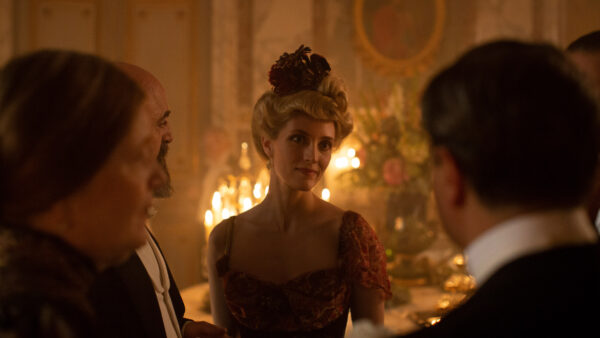 The police, run by different factions shaking down different political groups, are divided. Leading the miscreants is Superintendent Puybaraud whose hand is in every pocket but whose loyalty, if you can call it that, is with the far right and the royalists. Nevertheless, he has hired a whole system of domestic spies so that he can learn first hand what these groups and the ones against them are up to. One of his recent recruits is the aforementioned Marguerite Steinheil, a notorious beauty, short of cash, who runs in helpful circles.

But this isn’t just about politics. A suitcase floating in the Seine is opened and body parts, minus a head, are found and the Paris police must discover who the victim was. Another carved up body in a suitcase is found, unrelated to the previous, but the police know this victim and can quickly surmise the slayer.

Assigning both cases to his subordinates, Lépine’s primary goal is to bring in modern techniques, sniff out the blackmailers, and remove outside influence by the various non-governmental political factors. It is Guérin’s movement that worries him the most. They have been bringing the more moderate right wing factions into his group and planning a coup to coincide with the retrial of Alfred Dreyfus. Lépine’s major nemesis within the force is Puybaraud who was passed over as Police Chief, but if the right wing coup succeeds, he will be elevated past Lépine.

But Lépine is unflappable. Neither his wife’s drug addiction, Puybaraud’s shadow police force, nor the coup planned by the Guérin family and their many followers changes his approach. His sang froid is chilling. Upon learning the identity of the first body, a seamstress/servant named Josephine Berger, the solution will be tied into false testimony, multiple murders by a hired assassin, and a prominent aristocratic family. Superintendent Cochefert, realizing that Puybaraud is leading the cover-up, proceeds with caution even though hot headed young Inspector Jouin wants to charge ahead. 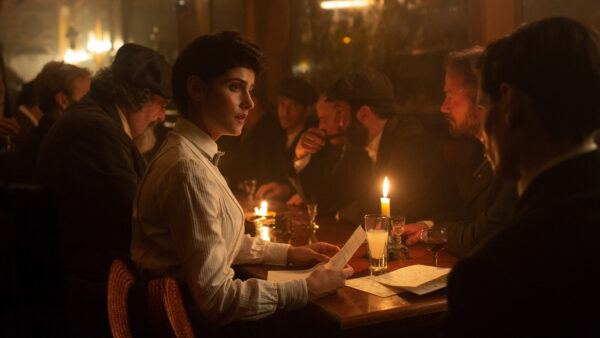 Add to this volatile mix a young beautiful legal assistant, Jeanne Chauvin, a woman who has passed the bar but is not allowed to practice because of her gender, and you have a cauldron about to boil over. Jeanne becomes very interested in the case of Joséphine Berger, whose child is now a ward of the state. No favorite of the police because most of her clients are anarchists, Jouin is more than intrigued.

Although one can take this for the tense drama that it is, it is all steeped in the relevant facts of this era known as the Belle Epoque, which was anything but Belle. It is the backstory of French politics of the day, beginning with the founding of the Third Republic (1870) following the fall of Napoleon III that gives this series far more depth.

Napoleon III’s leadership had been disastrous for the country, and ended when he lost a war he had foolishly declared against Germany that resulted in the German annexation of Alsace and Lorraine. The Republic was briefly co-opted in 1872 by what was called the “Commune.” The radicals of the Commune who stood for the separation of church and state, gender equality, and free education held power for only two months before the army stepped in and violently and mercilessly suppressed the movement The retaliation was swift with thousands of the radicals killed in the fighting or executed by the army. In theory, the victory was the Republic of France, but royalists still existed and held most of the power. Stinging from the loss of Alsace Lorraine, scapegoats were needed, and who better to fulfill that role but Jews, reviled for their supposed wealth and power. Soon they had a call to arms with the Dreyfus Affair.

Alfred Dreyfus was a captain in the French army convicted of treason for allegedly spying for Germany. The proof against him was invented, the evidence against the true traitor was hidden. Dreyfus was convicted and sent to Devil’s Island in 1894. His true crime? He was a Jew. France was a veritable hotbed of Anti-Semitism and Dreyfus was the flash point. When it became apparent that Major Ferdinand Walsin Esterhazy, a Christian with friends in very high places, was the true perpetrator, he was given a quick trial and acquitted.

Emile Zola, the leading literary figure of the day, championed Dreyfus’s case with a now famous letter in the left wing newspaper L’Aurore and wheels were put in motion to retry him in 1899. And this is the jumping off point for the series as the rhetoric escalates, factions are on the verge of rupturing the government, and the police, in charge of maintaining order function as protectors of the right wing, are intent on recapturing the government and preventing an exoneration of Dreyfuss. Their enemy are the Jews and anything done to marginalize and terrorize them further is on the table.

Several of the characters portrayed in this show were actual people. Louis Lépine was called back from retirement to modernize the force. Marguerite Steinheil was a professional concubine with many famous lovers following her “adventure” with the President. Jules Guérin was the figurehead of the anti-Semitic League, wielding frightening power with significant followers. His newspaper, The Anti-Semite rallied his followers. Jeanne Chauvin, later in 1900, became the second woman to practice law in France after the rules were changed. All of the other characters have an air of authenticity that gives further depth to the stories told in these 8 episodes. If this were a book, it would be a page-turner. As a television series, it is truly bingeable. You will be left asking, “What’s next and when can I see it?”

The first two episodes premiere September 20 on MHz Choice with subsequent episodes released weekly after that.