Protests in support of the Norris Theater convinced the Rolling Hills Estates City Council to intervene. Photo by Brenda Cash.

Operators of the Norris Theater and its Performing Arts Conservatory are enmeshed in a dispute over parking at the Promenade Mall, and La Venta Inn owners are confronting neighborhood complaints about noise from wedding events.

The simmering disagreement between Promenade Mall on the Peninsula owners, and Norris Theater advocates centers around 75 of the 225 parking spaces in the mall parking lot, long allocated to theater and conservatory patrons.

Pennsylvania-based mall owners Stoltz Real Estate Partners are in the process of selling the property. A long  existing agreement allowing theater goers to use  75 spaces in the Promenade parking structure may be impacting those negotiations, according to Gabi Ryan.

Ryan describes herself as one of “several mothers with kids” in theater and conservatory activities battling to save the facilities.

“Pavilion and Conservatory guests had been parking peacefully at the mall since extensions of the theater were opened in 1999,” Ryan said.

She said she believes “big business is bullying a valued neighborhood theater and will destroy a community treasure, all for money.”

Stoltz officials have filed a civil lawsuit against the Norris operators, seeking more than $1 million for alleged “trespass” over the past decade due to facility parking. That trial is set to start Oct. 31.

But after public protests, the city council inserted itself into the fray, directing City Attorney Donald Davis to notify Stoltz and Promenade on The Peninsula that “they are in violation of their entitlements.” Those entitlements require Stoltz to maintain a shared parking agreement with the Norris Theater in full force and effect at all times.”

The city is ordering Stoltz to “cease the conduct that is prohibiting parking of theater events as required under (the existing) agreement.”

Officials said they will seek a court order to compel Stoltz and The Promenade to comply if they resist the council’s direction.

Following the council’s action, Ryan said she was told Monday that steel barricades that had been installed in the parking lot to impede theater and conservatory parking were removed “as an act of goodwill by the new buyer who is waiting in the wings.”

“Obviously, it helps to have the city of Rolling Hills’ support,” said Ryan. “We believe our rally last week and our kids’ speeches at City Hall two weeks ago had an impact. However, this does not change the fact that Stoltz Management and The Promenade are using bully tactics.”

Last month, Promenade issued a statement to Easy Reader through Promenade general manager Cortney Medak, saying it “has no comment on pending litigation.”

The mall’s buyer is CVP LLC of Rolling Hills Estates. Steven Lee is listed as the limited liability corporation’s agent in state records. Stoltz officials said in court filings they will remain as property managers following the sale.

The Promenade property has been identified by the city as the future location of high-density housing and development, and the existing parking agreement with Norris may be “an impediment” to that anticipated use, said Ryan.

A decades-long verbal agreement allowed parking in the Promenade lot. But three years ago Promenade owners disputed the validity of that agreement and demanded payment of $5,000 monthly for use of the 75 spaces.

“The Norris Theater has been around for nearly 40 years, and has been the ultimate gem in the community as it provides an array of cultural offerings to every age group and demographic,” said Ryan. “It is also the home of PVPA Conservatory, a valued asset which offers youth a variety of dance classes, performing arts groups, summer camps, musical theater and a place for special needs teens and adults to dance.”

Losing the Norris “will be a devastating blow for everyone in the area as it touches every part of the South Bay community,” added Ryan. “It is particularly special for youth as it has been a safe haven, a refuge and a place for personal growth for countless children.” 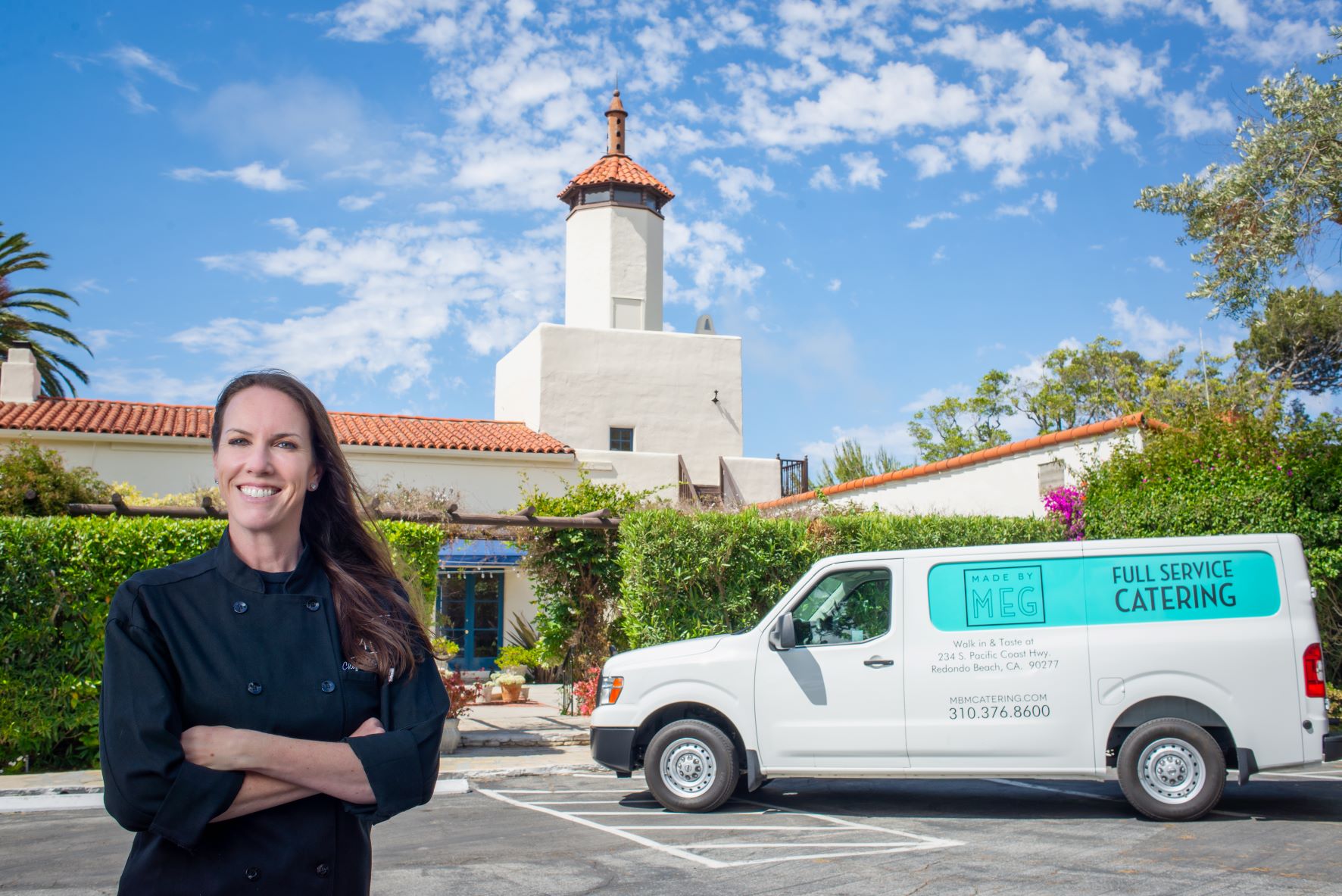 Megan Walker, of Made by Meg, assumed operations of La Venta Inn a year ago September, following the lifting of COVID restrictions. Photo by John Russell Photography

The historic La Venta Inn, a fixture on the Peninsula for since 1923, faces a different kind of threat to its future – neighbors’ complaints about traffic, noise, and parking associated most often with weddings at the venue.

The city of Palos Verdes Estates has formed an “ad hoc” committee to address the conflict. Council members Dawn Murdock and Jim Roos will lead the committee, composed of residents and La Venta stakeholders, the council decided.

Roos expressed confidence the committee “can strike the right balance and come back to the council with a recommendation.”

The committee will continue to examine possible prohibition of outdoor activities after 8:30 p.m. and mandating a new closing time of 10 p.m.

For many years, the Inn has been a favorite venue for weddings, although a 1940s city ordinance specifies the site should be used only for a hotel and restaurant. The pandemic shutdown appeared to remind nearby residents of what a quiet neighborhood was like; complaints about weddings and accompanying traffic and noise multiplied when the venue resumed its usual activities.

The Inn’s owners contend the Spanish villa does not have enough rooms to make a hotel profitable, and that wedding events are needed to allow the Inn to continue operations.

Meg Walker, owner of Meg’s Catering and La Venta’s new operator, has expressed concern to council members that the proposed prohibitions would adversely impact her business. She is particularly worried about losing the right to offer outdoor dining for guests.

Under current proposals, Walker said, outdoor dining would not be permitted. That could force the business to close, she told the council.

One owner of the Inn, Mark Matthews, has taken issue with assertions that weddings are currently prohibited by ordinance.

Matthews said that is incorrect, that La Venta was always an event venue “even when my grandmother lived at the house.” She sometimes would host two weddings in one day, he added

“I believe the (1948) code was written to protect the existing building, not to outlaw outdoor use of the property,” Matthews wrote in an email to Easy Reader. “At the time the code was written, my grandmother was raising her family at La Venta….it was her home and not open for business. She didn’t take out a business license until 1954 or 1955.”

Matthews contends that “opponents of a proposed zoning text amendment believe the 1948 text was intended to prohibit any outdoor events, which weren’t taking place. I think a far more likely interpretation is (that it was) recognized that La Venta’s building was a community icon that should be protected.”

As a result, he said, the currently proposed amendment “isn’t an expansion of operating conditions. It’s actually adding restrictions that never existed before.”

In October 2021, interim City Manager Sharon Papa said that proposals from La Venta’s Walker “are way too broad,” but that she was “confident we will ultimately reach an agreement that everyone can live with.”

The website asserts the non-profit organization is “a group of over 50 concerned residents formed to preserve, and protect the quiet residential character the city of Palos Verdes Estates was founded upon.”

No individuals are linked to the website, which states in part: “The city’s top priority must be the residents’ welfare, and a viable quality of life. Instead, the city is attempting to preserve and legalize a use that created a known but unabated excessive noise public nuisance.”