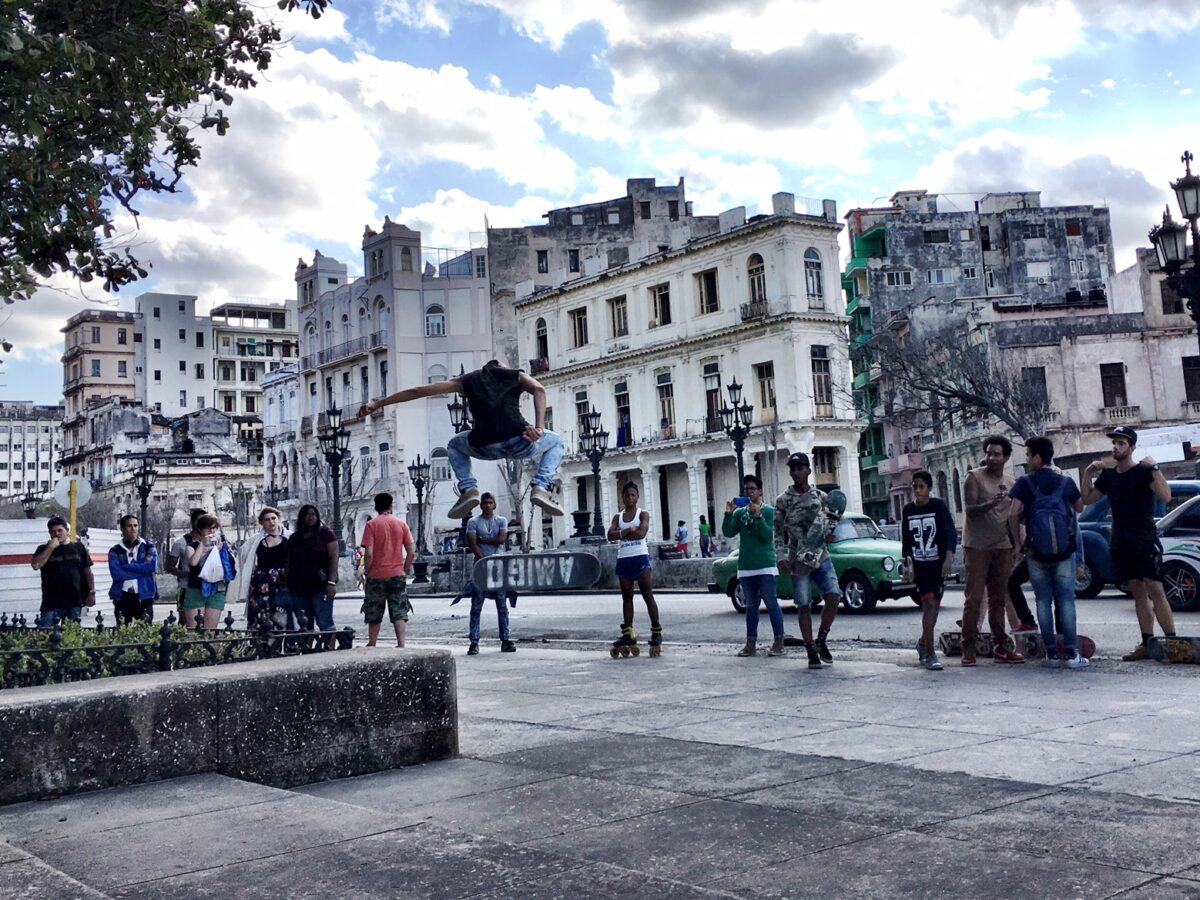 Havana skaters watch as one of their own attempts a kick flip off a ledge. 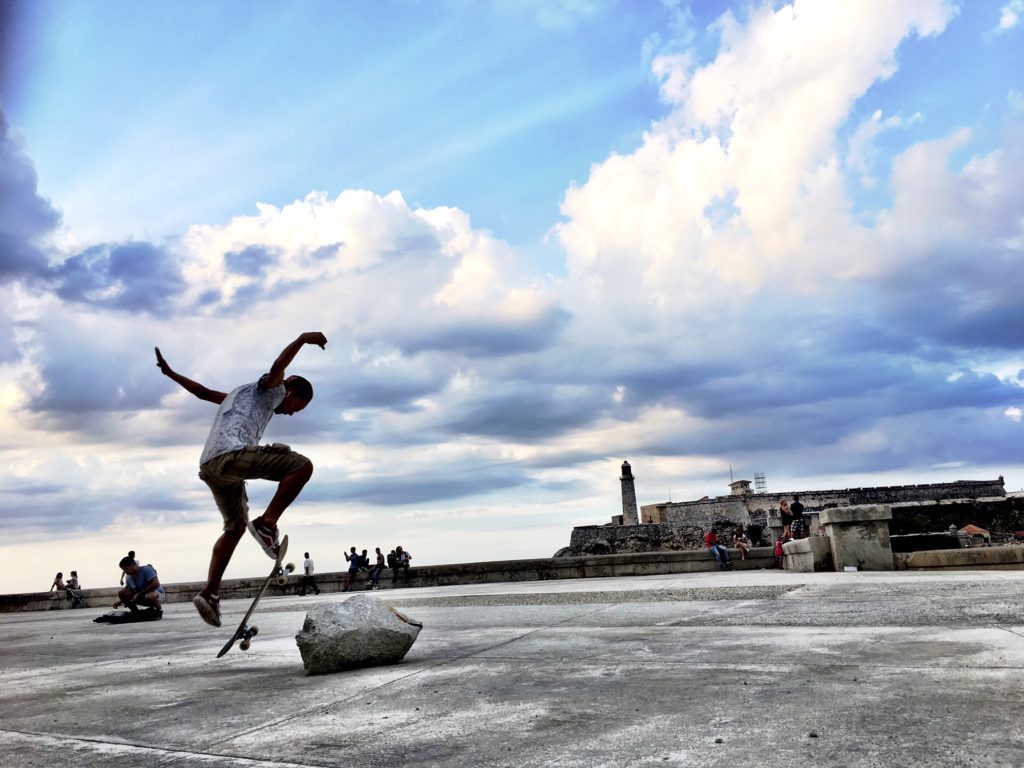 A skater lifts into the air with the Malecon, Havana’s old harbor, in the background. Photos by Anne Williams

Anne Williams and her husband John were under the First Street Bridge, one of the viaducts that cross the Los Angeles River and connect Boyle Heights to downtown Los Angeles, when Williams heard a male voice. “Hey Anne!” it called out, “From the Friendship Bell, right?”

The scene played out last year on Go Skateboarding Day, a loosely organized, self-explanatory celebration that takes place each summer solstice. Williams and her husband, Hermosa Beach residents, had skipped work and headed for downtown to skate and take in the action. And while searching for a particular spot, Williams had been recognized from a visit she made several months before to the Korean Friendship Bell in San Pedro — also while skating.

Skating has since carried her much farther. Earlier this year, Williams and her husband traveled to Cuba with an array of donated decks, wheels and more to supply the burgeoning Cuban skate scene.

To gather the materials, she relied on both her own initiative, and the kindness that she says is characteristic of skaters everywhere. At the suggestion of Bob Rich, manager at Becker Surfboards, Williams set up bins with signs seeking donations in various surf shops. The bin at Spyder produced by far the most, with customers, suppliers, and even sponsored kids contributing.

Growing up in Palos Verdes, Williams’ father, a doctor, did not allow skateboards in the house; they were, he thought, too dangerous. But as Williams’ own children, two young boys, got older, decks and wheels started appearing. It was her husband who broached the idea of their children skating. “I thought ‘We live in Hermosa. They’re going to skate, they should be competent,’” John recalled. He began to notice a board he had bought for himself periodically disappearing.

Williams became attached to skating as a joyful way to get around and get exercise, and can now regularly be found skating up and down The Strand. Though she rolls her eyes at the self-involved fitness obsession of the South Bay, she often wears a FitBit-esque machine when skating. She logged more than 1,300 miles last year.

Despite her hours on the asphalt, Williams will never be mistaken for a Pier Rat. She is a self-described “corporate type” who asked her employer if it was alright to be seen skateboarding. She’s a JD/MBA whose passion for skateboarding can make for a befuddling first impression, and even a second or third. She works for a construction engineering firm in downtown, and, when hundreds of young skaters rolled by her office during Go Skateboarding Day, a coworker texted a picture from her desk and jokingly wrote “your people are causing trouble.” (The employee did not realize that Williams was among the ragged youth.)

But even though she won’t be found in the half-pipe—“I’m very conservative. I don’t do any tricks. My ‘trick’ is that I still have all my teeth” — Williams could not be called a poser. Kids can quickly sniff out fakes, and fakes inside marginalized subgroups even quicker. But as the run-in with the young skater under the bridge proved, Williams has a talent for seeming like she belongs that can only be explained by genuine enthusiasm.

Dickie O’Reilly, managing partner for Spyder Surf shops, helped Williams collect boards and equipment. The first word he used to describe working with her on the effort was “fun.” Spyder has been part of similar charity efforts in the past, including donating boards for inner-city skaters, but Williams’ contagious excitement, he said, made this project stand out.

“She was so passionate about it, and willing to do all the hard work of getting the stuff down there. It was fun to see how excited she would get every time she’d come in and pick up another load,” O’Reilly said.

Once she finally made it to Cuba, she found the same sense of community and connection that keeps her kicking and pushing on The Strand.

“If I were dropped in a strange city and needed help, I’d look for a skater,” Williams said. 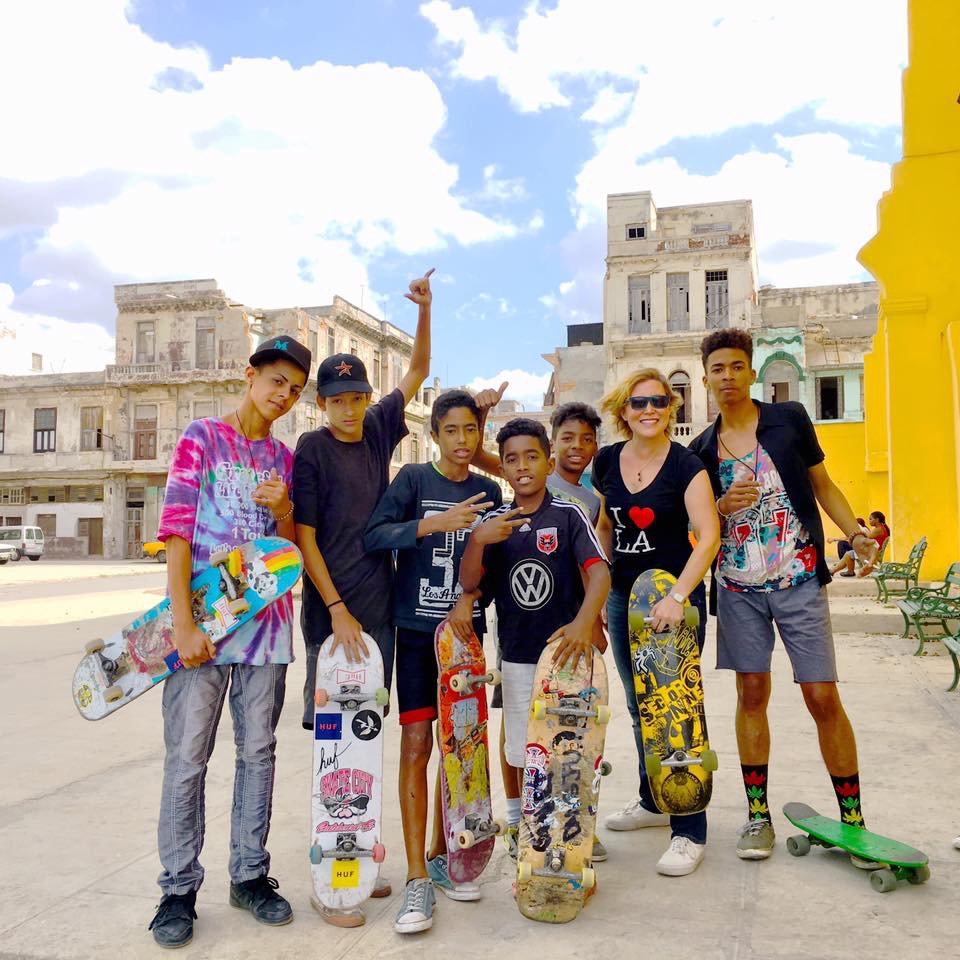 Williams got the idea for the charity-themed trip after connecting with Cuba Skate, a Washington, D.C.-based nonprofit that works to “foster a constructive environment for Cuban youth that will have a positive impact on the greater community.” They connect the skate scene with helpful outsiders, and the group’s Instagram account often displays some of the country’s most talented youth. Williams, knowing that she would not have internet access on the trip, downloaded many of the images onto her phone, hoping to use them to recognize people once there.

Williams and her husband ventured to Cuba in March on a group trip booked with several members of the Los Angeles City Council. She had collected six complete skateboards, 21 decks, five sets of wheels, and miscellaneous bearings, shirts, stickers and other paraphernalia. Getting that much gear into the country was risky. It weighed about 100 pounds, and she had read horror stories on the internet about goods being taxed to infinity, or even confiscated.

She managed to get the gear through, but once inside faced another problem: how to get the boards into the hands of actual skaters. Although Cuba Skate and others have worked to draw attention to skaters in the country, the group’s on-the-ground infrastructure does not include a central donation area.

So she and her husband began showing up. It was “awkward” at first, Williams said, but eventually word got out, and skaters in the region began recognizing her and seeking her out. To prevent all the gear from ending up in relatively few hands, she sought out the “tribal elders” of the Havana skate scene: a 39-year-old named Eric, and Enzo, 20. The two agreed to hold a street skate competition that would gather kids from all over the area, and she could distribute the boards there.

“Everybody got something. Kids were stoked, no one went away disappointed,” Williams said. 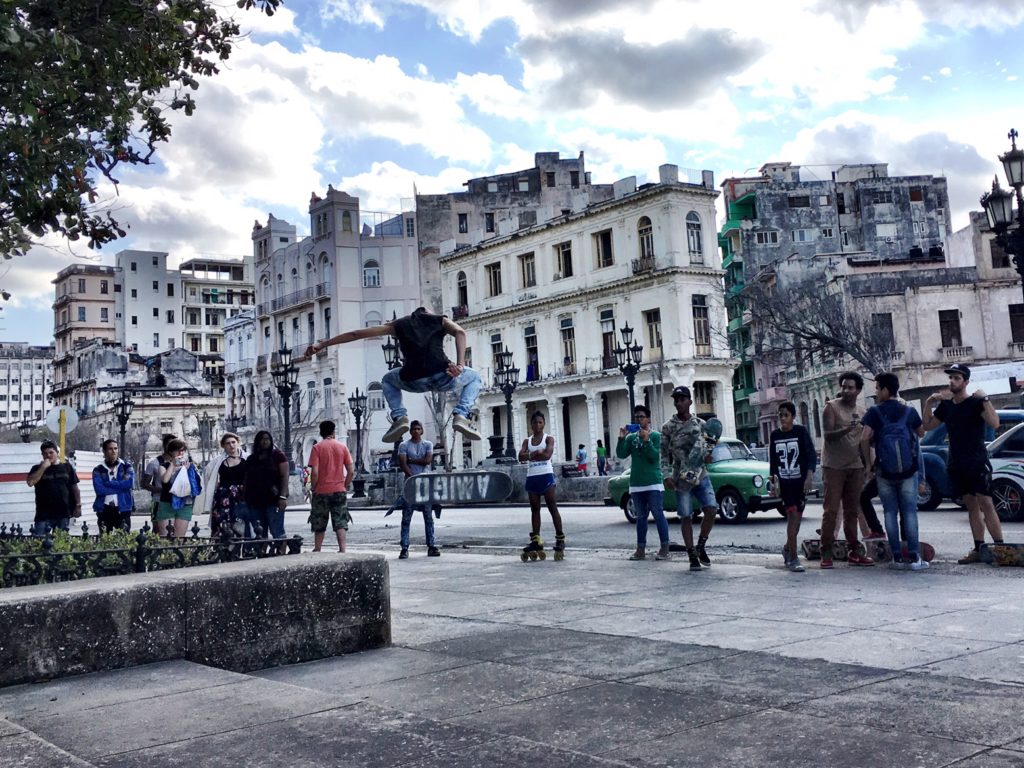 Havana skaters watch as one of their own attempts a kick flip off a ledge.

Williams was blown away by Cuba’s lack of “touristy gimmicks,” and the humility of a people who adjusted to a lack of resources by constantly improvising. When the hotel ran out of printer paper for a customer’s bill, the concierge simply wrote it down on an envelope fished out of the garbage.

She and her husband made fast friends with many of the people they met, and planned to return in November, this time with their kids in tow. But the new policies announced by President Donald Trump last month put a kink in their return trip, which has now been put off indefinitely. (Neither Trump nor President Obama technically changed the long-standing prohibition on tourism to Cuba. There are 12 permitted reasons for U.S. travelers to visit the island, including journalism and religious activities. Obama allowed people to declare a permitted reason with little scrutiny, while Trump has indicated his administration will examine travel to the island much more closely.

Staying stateside does not mean Williams’ wheelbound adventures are over. She molded the mobility of a skateboard with her interest in local architecture and urban design, and travels everywhere with a skateboard under her arm. She and her husband recently spent a day skating the entirety of Wilshire Boulevard — all 22 miles, from downtown to the beach in Santa Monica.

More recently, they returned to downtown for another iteration of Go Skateboarding Day. She and her husband stood out amid the crowd of skaters, almost all of whom were young Latinos from inner-city neighborhoods, but found themselves accepted.

“I find the skate community to be very welcoming. Even a couple of older white folks can integrate into this youthful, testosterone-driven mob without any problems,” John said with a laugh.

John credits his wife’s outgoing personality for forging quick connections. For her part, Williams said the secret behind “speaking skate fluently” is in recognizing that skateboarders, whether in Hermosa or Havana, are part of a community.

“Kids there are the same as kids here. They’re all in the same club, all getting hassled by the same cops.”