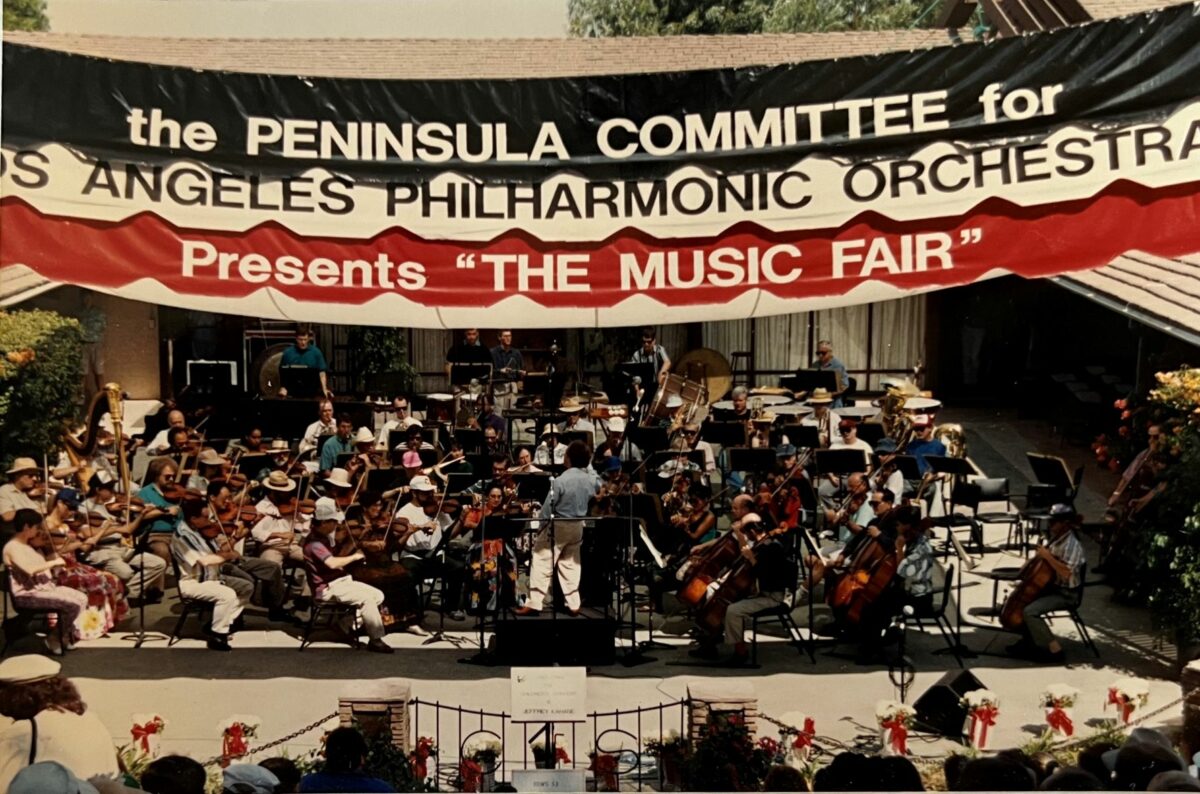 Jeffery Kahane at Chadwick School in 1990 conducting the orchestra for the Music Fair. Photo courtesy of PCLAP

The Peninsula Committee, which celebrates its 70th birthday in May, donates on average $80,000, and in some years upwards of $100,000 to the Los Angeles Philharmonic. The extent of the organization’s influence on music education in the South Bay has been similarly large.

“We’re one of the oldest arts and culture organizations on the hill,” says Debbie Uba, a member who is taking on the task of planning the organization’s 70th birthday gala.

The origin story begins in 1951 with a campaign spearheaded by Dorothy Chandler, heiress of a department-store fortune and wife of the publisher of the Los Angeles Times, to save the Hollywood Bowl from financial ruin.

Chandler’s goal and ultimately, legacy, was to rescue the Bowl, and later to support the construction of the Los Angeles Music Center – a home for the beloved L.A. Philharmonic, a local institution since 1919.

Chandler’s campaign caught the interest of a woman in San Pedro named Nina Trutanic, the daughter of a Croatian immigrant who founded StarKist Foods. She and her husband, who was an executive at her father’s company, had become well-known for their philanthropic support of arts and music.

Trutanic gathered 15 women to begin an L.A. Philharmonic affiliate in the South Bay. Trudy Park, one of her original recruits, is still a member, at the age of 103. Their mission, she announced, would be twofold: to support the orchestra through fundraisers and foster an appreciation of music throughout the community.

Within three years of Trutanic’s vision, the organization had become a body of 150 women.

“They were younger than our current membership because in those days a lot of the women weren’t working,” says Tricia Paulsen, the organization’s unofficial historian. “It was a very big social thing among women on The Hill.”

The Peninsula Committee raised money by hosting various events: children’s theater shows, designer fashion shows, tennis tournaments, opening events for department stores, days at the horse races in Inglewood. They also gathered for intimate concerts at homes, referring to these brunch-time events as salons. They dressed up, in white gloves and gowns, to attend L.A. Philharmonic concerts at the Hollywood Bowl together. They received a lot of press in a time when “social” news sometimes spanned eight newspaper columns.

In 1959, they began sponsoring weekly buses to L.A. Phil concerts on Friday mornings. In 1963, they hosted a “Symphony by the Sea” at Marineland, which featured a concert by the L.A. Philharmonic and dancing dolphins.

In 1972, the organization began running what became known as the Peninsula Music Fair, an all-day event featuring the L.A. Philharmonic at Chadwick School. Five thousand people attended the first event, which occurred annually until 2008.

“That was the thing to do,” recalls Paulsen, whose Realtor gave her tickets to the Peninsula Music Fair when she moved to Palos Verdes in the ‘80s.

While the Music Fair has been discontinued, the Peninsula Committee continues to host various events in support of the L.A. Philharmonic.

“Some orchestras these days survive only because of big donors, and they don’t have these small groups anymore,” Paulsen says. “I think it’s important to keep the community feeling like they know their orchestra. It makes you feel connected, and in this day and age it’s hard to feel connected.”

Members of the organization are excited about the L.A. Philharmonic’s formation of the Youth Orchestra of Los Angeles. Members performed at this year’s Super Bowl. Over the years, the Peninsula Committee has promoted music education and appreciation in the communities surrounding it.

Until COVID-19 imposed restrictions on gatherings, the Peninsula Committee hosted concerts at the South Coast Botanic Gardens, featuring musicians in junior high and high school who were preparing for competitions.

“That was really great because they could fellowship, and share resources.” Uba says. “We’re always just keeping our ears to the ground and listening for what the needs are.”

The Peninsula Committee also sponsored recorder lessons in Palos Verdes schools, which were so beloved that the Peninsula Education Foundation now funds them.

Perhaps its best-known activity among South Bay residents is the Music Mobile, a van full of all types of instruments, from trombones to cymbals, that visits 24 elementary schools, from Wilmington to Palos Verdes.

“It’s the most satisfying thing we do,” Paulsen says. “The kids just light up.”

“It was a really important part of my kids’ education,” Uba adds. “They really understand and enjoy music now. I think what the committee does is create music appreciation – that’s a big part of what we want to transmit and continue.”

Seventy years after its inception, the Peninsula Committee still hosts salons, in homes and churches. Musicians perform and then answer members’ questions.

“It’s been a real education for me,” says Uba, who began playing the piano when she was four years old and began taking lessons when she was five.

The committee’s 70th birthday in May will be the organization’s first fundraiser since the novel coronavirus became a global pandemic. Uba is planning what she describes as “the full nine yards” – a sit-down dinner, silent auction of experiences custom-designed by members of the committee, and of course, music.  This special evening will be held in the outdoor courtyard of the Museum of Latin American Art in Long Beach.

“We’ll be outside, under the stars, having dinner, and I’m so excited about who we’ll be listening to,” Uba says. The group she’s excited about is the Molly Miller Trio. Dr. Molly Miller, the lead guitarist, graduated from Palos Verdes schools before becoming a professional guitarist and chair of the Guitar Department at the Los Angeles College of Music. She’s performed with Jason Mraz and the Black Eyed Peas and plays guitar for the house band on the primetime TV show The Bachelor.

“She said she’s really benefited from her exposure to music education and she’s now teaching music at the postgraduate level and touring and just loves it, so she said there’s no reason I wouldn’t be there,” Uba says.

“People are members for life,” Uba says. “They won’t give it up,” she says, laughing. “It’s really something special.”

For information on membership or tickets to the May 15 fundraiser, please visit www.pclaphil.org. PEN