The fight for Friday night lights 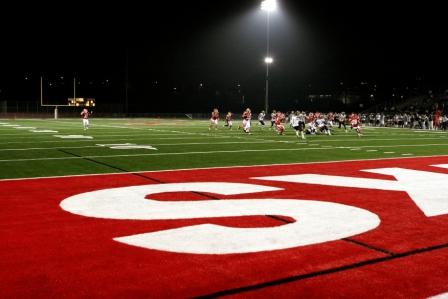 Parents of Peninsula High are fighting to have Friday night lights. Redondo recently installed lights that have minimal impact on the surrounding neighborhood. Photo by Ray Vidal

For Kevin Moen and a group of residents and alumni at Palos Verdes Peninsula High School, Friday night football represents an American pastime.

“It’s part of the fabric of America,” said Moen, who grew up in Palos Verdes, played football in high school and college, and for the past four years served as co-head varsity football coach at Peninsula High.

Football games in the fall on a Friday night at Mira Costa or Redondo Union high schools have a certain electricity in the air, Moen said. Maybe it’s the marching band or the cheerleaders or the smell of hamburgers grilling in the cold night air, and yes, the football that draws Americans together throughout the country.

Yet Friday night football in Palos Verdes is something that’s never been experienced, aside from a home game or two over the years using rented temporary lights, because none of the high school fields on the peninsula have permanent lighting fixtures.

And at Peninsula High in Rolling Hills Estates, the lack of stadium lights has been creating some big controversy.

Last week, a Torrance judge threw out parts of a lawsuit that would have compelled the school district to move forward with a plan to erect permanent lights at Peninsula High.

Moen led the Stadium Lights Steering Committee that sued the district after school board members abruptly nixed the project last year. The committee had raised $250,000 with the school district’s approval toward the goal of putting up lights for just five or six home football games each year.

But the project stirred up opposition from local residents who feared night games would disrupt the neighborhood. The idea was to perform an environmental impact review and further community outreach before the board would decide the merits of the actual project.

That was until supporters walked into a school board meeting last July with the intention of presenting a check for a quarter of a million dollars. Instead the board took a surprise vote to end the project. What had been unanimous support less than a year earlier in favor of the project was now unanimous opposition.

“It was done in such a disheartening fashion,” Moen said. “We had been working cooperatively with the board and the district throughout this whole process and then in a poorly executed school board meeting the board members came up with a contrived reason not to go forward with it.”

An attorney in the group, Chuck Michel, whose son attends Peninsula High, sued the district for potentially violating the state open-meetings law, which requires adequate notice for public hearings. So the board retook the vote at the next meeting.

In making its decision, board members essentially said the project was creating too much controversy in the community and drawing attention away from education. School district superintendent Walker Williams said the issue had just become too divisive.

“The board really seriously weighed the pros and cons and did not feel like at this time it was to the benefit of the school district,” Williams said.

But many, including Michel, think district officials were worried about passing the upcoming $7 million parcel tax at the time and did not want the stadium lights project to give an impression the district somehow didn’t need the money.

“They basically didn’t want to alienate the neighbors, so they kind of snuck this vote in,” Michel said. “They misled the steering committee folks that there wouldn’t be anything substantive and they would do an environmental review, which no other district has done by the way. You don’t need to do an environmental impact review to put up some lights.”

“The committee made every effort to reach a compromise,” she said. “Its last resort was to file the lawsuit. It sincerely hoped that through this lawsuit a compromise could be reached that allows for all the parties to work to a position that allows for limited use of the lights.”

A portion of the lawsuit dealing with damages and attorney fees is still pending, but debate over the lights has dimmed. Principal Mitzi Cress, who supports having lights on the football field, said she still hopes a compromise is possible to use the existing funds for temporary lights on a few home games next year.

“If everybody could just put all the hurtful things aside, I still think there’s room for compromise but there’s just such a lack of trust. It has really become quite a situation with lots of miscommunication and misunderstandings,” Cress said. “It’s somewhat unfortunate.”

Cress, who grew up in Palos Verdes and attended Miraleste High School, said she’s often wished the peninsula could experience Friday night football. A recent game she attended at Mira Costa made her feel somewhat envious, she said.

“I just thought ‘wow, isn’t this what high school is supposed to be about?’ It’s so wholesome and it feels healthy. We don’t do enough of that,” Cress said. “We’re all so busy working and we come home and shut the door and we don’t come out and visit with our neighbors. It just seems like a beautiful thing.”

But even Cress says the lights project is somewhat unrealistic these days given the current state budget crunch.

“It was a different era then when we weren’t in this budget situation. Now it seems kind of crazy,” Cress said. “We have desperate needs in the state of California and our school district where funding has just dried up.”

The project was estimated to cost up to $500,000, which would have been raised completely by the community without district funds. Meanwhile, the Palos Verdes Peninsula Education Foundation is embarked on a landmark $2.7 million fundraising campaign for educational programs lost to past budget cuts.

This isn’t the first time the debate over Friday night football on the hill stirred up controversy. Eleanor Curry served on the school board in the 1960s and remained active in the district throughout the years. She said the issue first came up during the school’s construction when she was on the board.

Debate resurfaced about four times over the decades by one group of supporters or another, but none had raised the kind of money or advanced the cause as the most recent effort. Each time the district chose against stadium lights in considering the best interests of the local neighborhood, said Curry, who was opposed to the lights then and now.

“There has been in PV a concerted effort to make the schools throughout the peninsula good neighbors,” Curry said. “That means things that are done on the school campuses are allowed under the conditions that they won’t be disruptive to the neighbors.”

Backers said along with bringing the community together and fostering school spirit, home games at night would allow many parents who can’t otherwise take off work in the middle of the day to attend games.

But residents opposed to the project worried that its use could expand as time went on, bringing larger crowds and more noise during the evening hours. Without enough parking, they said activity would likely spill into nearby streets.

“Our school boards over the years have worked hard to maintain a good neighbor policy,” said Mark Sturgeon, a local resident opposed to the lights. “When you have all these schools wrenched into residential neighborhoods we think that’s important.”

And there’s also the impact to viewing the night sky, Sturgeon said.

“The school district has no outdoor lighting for sporting events at any of the campuses, and that was by design,” Sturgeon said. “Two of the four cities on the peninsula have no street lighting whatsoever. The others have very limited lights to preserve views of the night sky and views in general. Any kind of outdoor lighting, especially something as bright as stadium lighting would interfere with the view.”

Supporters counter that the field borders two major thoroughfares with bright streetlights already so any impact to views would be minimal. New stadium lights at Redondo Union High School erected two years ago were designed to minimize refraction beyond the field. The same types of lights were considered at Peninsula High during initial proposals.

“People don’t like activity around the high school,” Redella said. “In terms of lighting, I think that’s only part of the problem. It just goes with the territory that when you purchase a home next to a high school it comes with the expectation that you will have on occasion some activity there.”

Moen said the committee was perfectly willing to compromise on any number of matters including an extremely limited use of the lights.

“Although we wanted to address the concerns of the community and the neighbors who felt there would be a major impact, we never got to that point,” Moen said.

In another dramatic wrinkle to the story, the Rancho Palos Verdes cable access channel, RPVTV, last year produced a 30-minute film in support of stadium lights at Peninsula High including dozens of interviews with local residents and players along with professional athletes about the experience of Friday night football.

“It’s something about when you close your eyes after a Friday night game and all you can remember is the crowd roaring and the lights in your eyes,” said Hunter who grew up in Arkansas. “It’s something I’ll never forget and I hope these kids get a chance to play under the Friday night lights.”

The film aired just once before the city pulled it. City officials even went so far as prohibiting anyone from posting the video on the Internet citing copyright infringement.

Michel, who obtained the video from the city through a public records request, is now suing the city to release the video publicly.

City attorney Carol Lynch did not respond to requests for comment on the matter. However, she told Michel in a written statement that the city “does not feel that it is appropriate for the city’s documentary program to be used to advance one side or the other of a controversial dispute regarding a school district property that is located in another city.”

If stadium lights ever come to Peninsula High it will likely take a “Hail Mary” of a compromise. Moen knows a thing or two about last ditch efforts. He was the player for the University of California Golden Bears in 1982 who ran over the trombone player during the famed flee-flicker play to end the game against Stanford known simply as The Play. He said Friday night games would be such a wonderful thing for the community of students.

“If Friday night football was such a bad thing I would assume very few towns would have it,” Moen said. “Instead, we’re in the minority.”

Sturgeon said there’s no big animosity between the two sides.

“They certainly were trying to do something good for a group of students,” Sturgeon said. “But we’re not some mythical small town in rural Texas where the social life revolves around the local football team.” ER