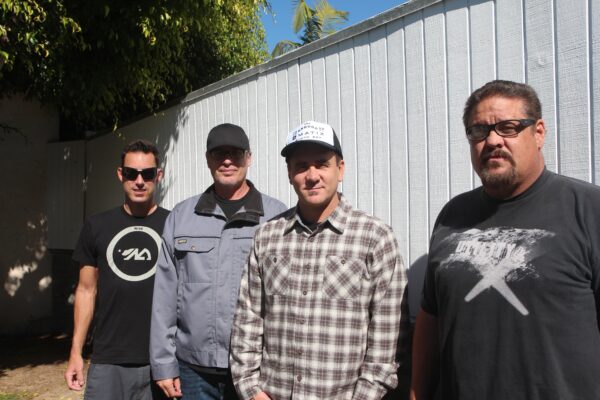 After almost three years separated from the band, frontman Jim Lindberg reconciled with his punk band Pennywise in January of this year. He sat down with guitarist Fletcher Dragge at the Schooner for a beer and, after years of radio silence, the band was reunited within an hour.

“The reunion is going great,” Lindberg said in an interview last week.

“We haven’t killed each other yet,” Dragge echoed.

Now, after a year of touring, Pennywise is playing a show in their hometown of Hermosa Beach for the first time in twenty years. They play Saint Rocke onNovember 15 as part of a benefit for Surfrider Foundation, and the show will be live streamed for fans across the globe to watch.

“We’ve been doing stuff with Surfrider probably since the band started out,” Lindberg said, “since we were active in the surf community and growing up surfing here in the South Bay. Just this last year I got asked to be on the Board of Directors and the first thing they wanted to do was a benefit. It’s for a good cause, so we were happy to do it.”

“We’ve had a full year of touring, played a couple of sold-out shows at the Paladium, did a bunch of touring in Europe and in the states with Sublime with Rome,” Linberg continued. “And we were kind of wondering what we were going to do with the rest of the year and then the Surfrider opportunity came along. To do it right here in our hometown made it even better. I think especially because Hermosa Beach needs the resources right now to fight some of the battles that are coming up. It is a great time for it.”

As if Pennywise reuniting, playing a show in Hermosa, and doing it to benefit surf culture wasn’t enough of gift-wrapped symbol of the band’s return to its roots, they’re also busy digging up old songs from their early days.

“Right now we’re working on old songs because we’re trying to put out a box set and trying to figure out what that’s going to look like,” Lindberg said. “We’ve started playing really old songs that didn’t make it onto our Epitaph releases, trying to remember those songs. We’re all really stoked on playing them again and having them come to life. You can definitely tell the difference. They are more the type of music we started out playing before the influences of being signed to a record deal. I think some of our fans will be interested to see what we sounded like before we sold our souls so to speak.”

The only non-vintage part of the Pennywise show on November 15 is the element of live streaming. Saint Rocke is equipped with state-of-the art cameras and digital capability as one of the first clubs in the country to live stream its shows. For those who didn’t get tickets to the sold-out benefit onNovember 15, IROCKE is offering the show digitally for $2.99. The digital component is both scary and exciting to the band.

“I don’t know,” Dragge said when asked how he feels about live-streaming the show. “We’re usually scared to be recorded live because someone is usually drunk…”

“Someone?” Lindberg chimed in.

“I might take the highest percentage on that,” Dragge said, laughing. “But other members have been known to be have a few beers at times. We’re a band that’s always been known for having fun and not taking it too seriously. We’ll be nervous going in there but then we’ll play one song and won’t even remember we’re being recorded. And we won’t have to watch it ever because it’s live.”

With a fan base that’s getting older and having kids, as well as an expanding global audience, Pennywise might just end up loving what digital performances can offer them. Sold out shows, lack of baby sitters, the Atlantic Ocean. None of these factors will prohibit fans from seeing the November 15 show.

Lindberg also joked that live streaming could resolve the conflict that helped split the band up in the first place: Lindberg is a family man with three daughters and wanted to tour far less than Dragge did.

“We’re hoping this goes really well so we can just stay here in the south bay and play,” he laughed. “We can play once a week on the internet.”

Pennywise performs the Surfrider Foundation Benefit on Friday, November 15 at Saint Rocke, 142 Pacific Coast Highway in Hermosa Beach. Tickets are sold out for the live event but fans can watch the show live streamed at IROCK.com for $2.99. The live stream will begin at 9 p.m. PST and is available at www.irocke.com/pennywiselive